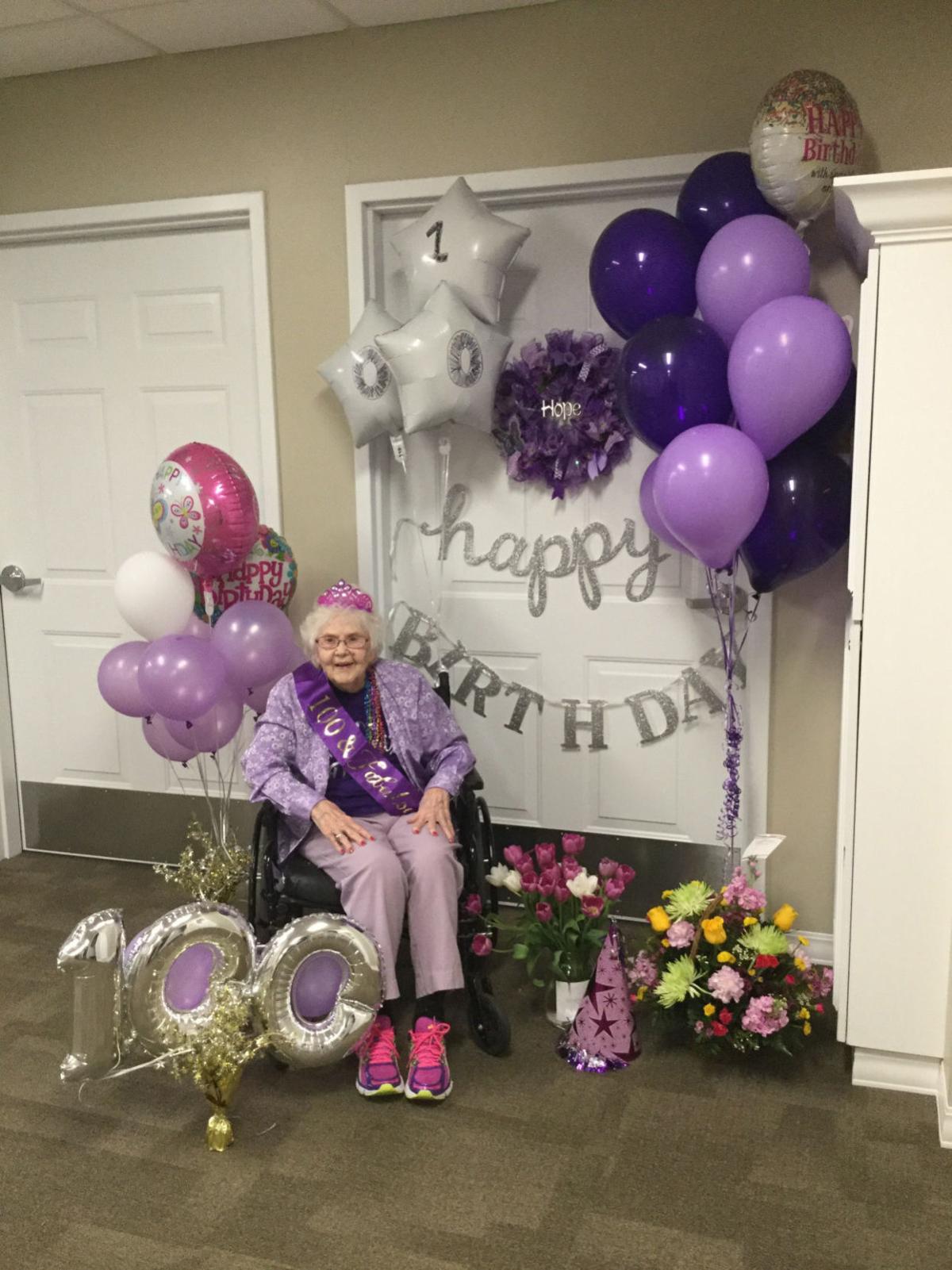 Above: Marcella Hope poses next to a display honoring her 100th birthday at New Aldaya Lifescapes in Cedar Falls. Left: Marcella saw her family through a double glass door on May 21. Below: During Marcella’s 99th birthday, she got some assistance blowing out the candles from her great-great-grandson, Clay Renner, then 5, of Janesville. 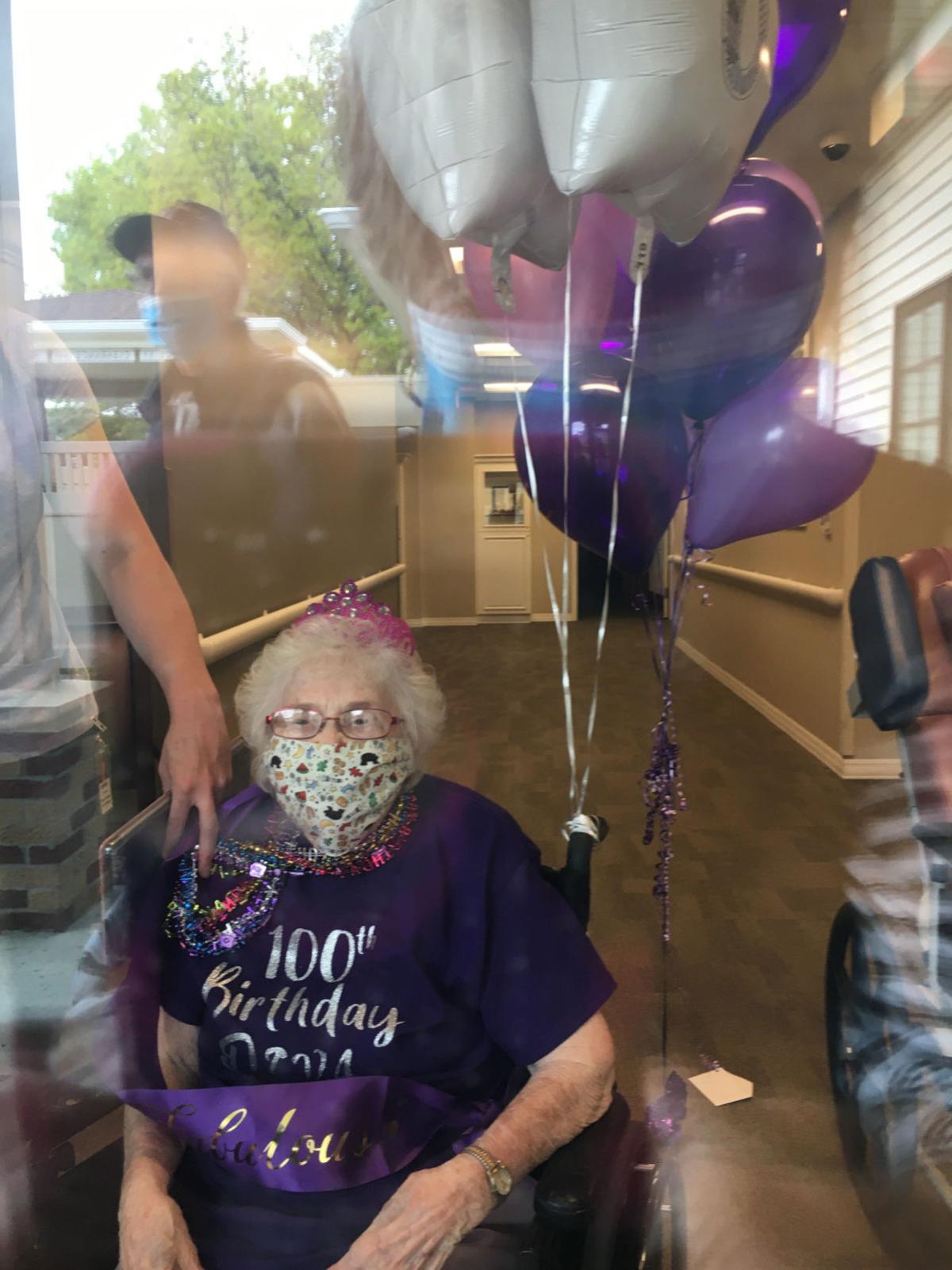 Marcella saw her family through a double glass door on May 21. 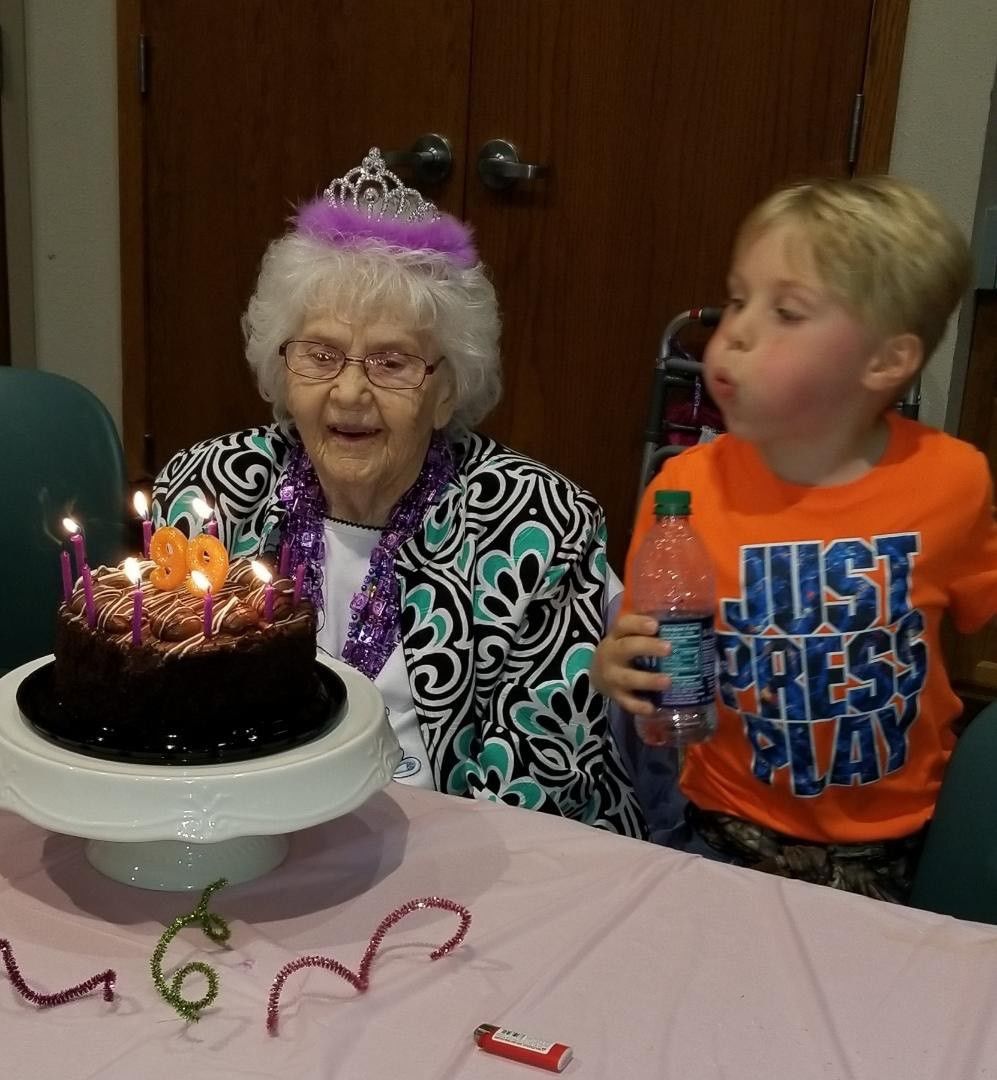 During Marcella’s 99th birthday, she got some assistance blowing out the candles from her great-great-grandson, Clay Renner, then 5, of Janesville. 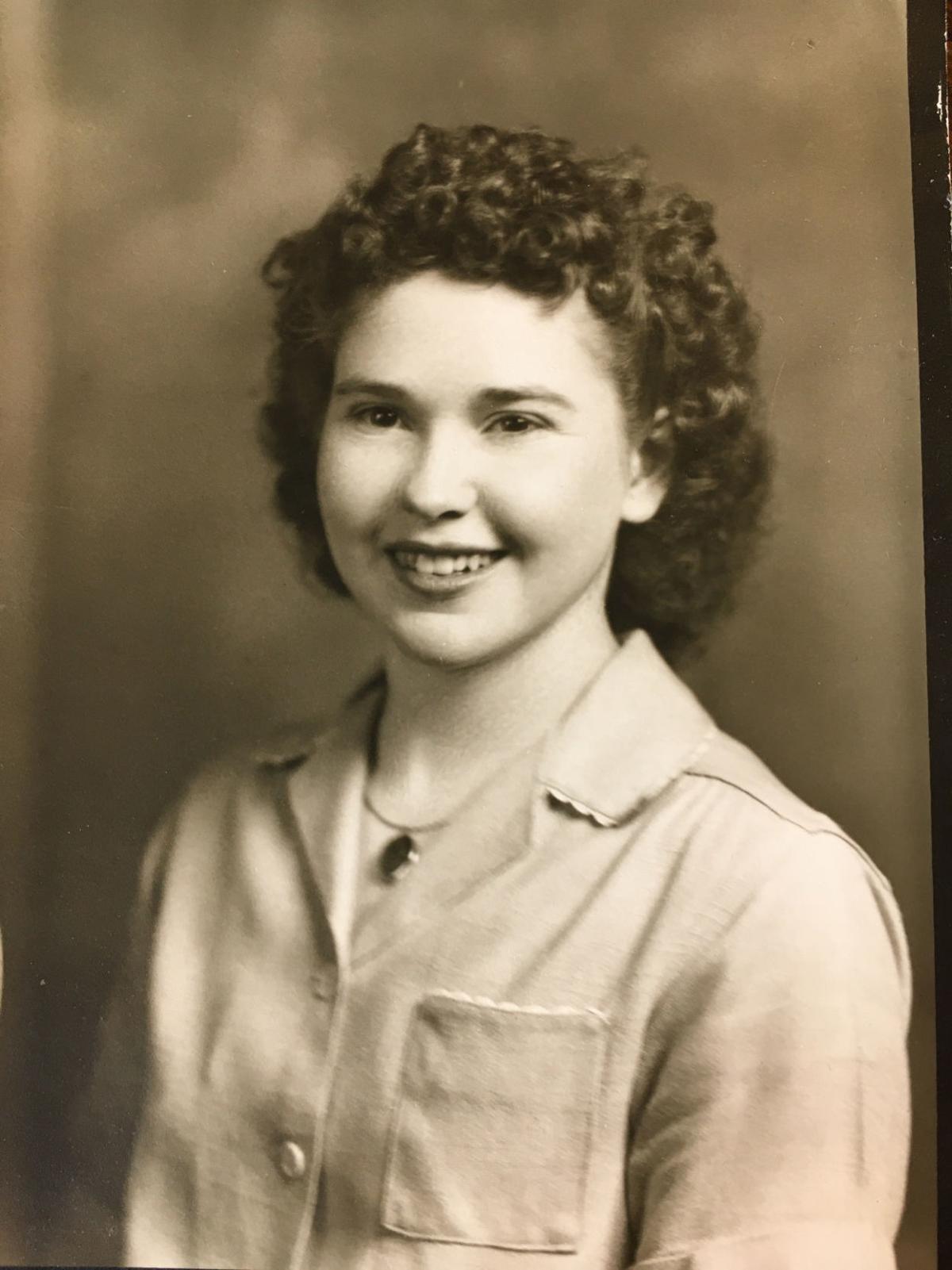 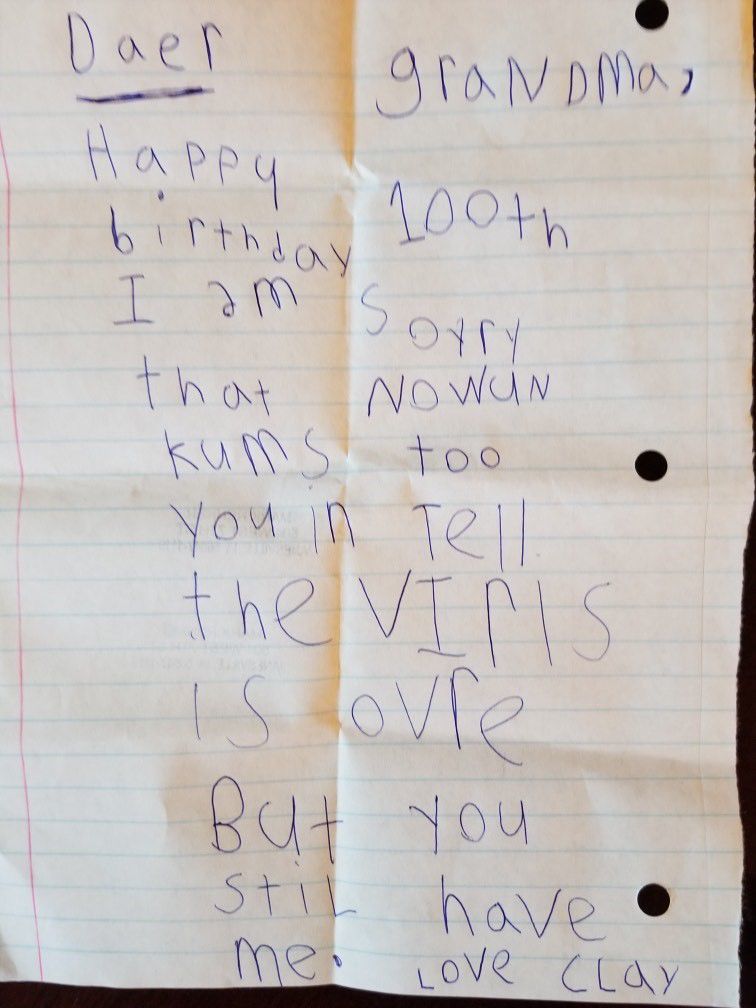 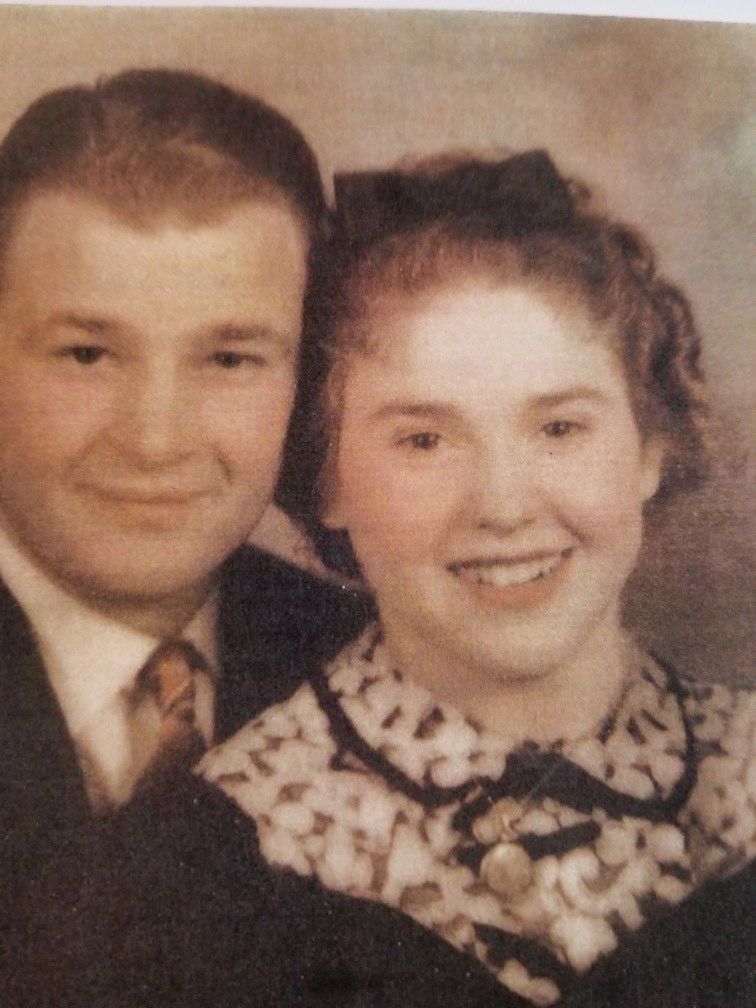 Left: Marcella’s 6-year-old great-great-grandson Clay wrote this note for her 100th birthday. Above: William Hope and Marcella Bagg were married in 1940. 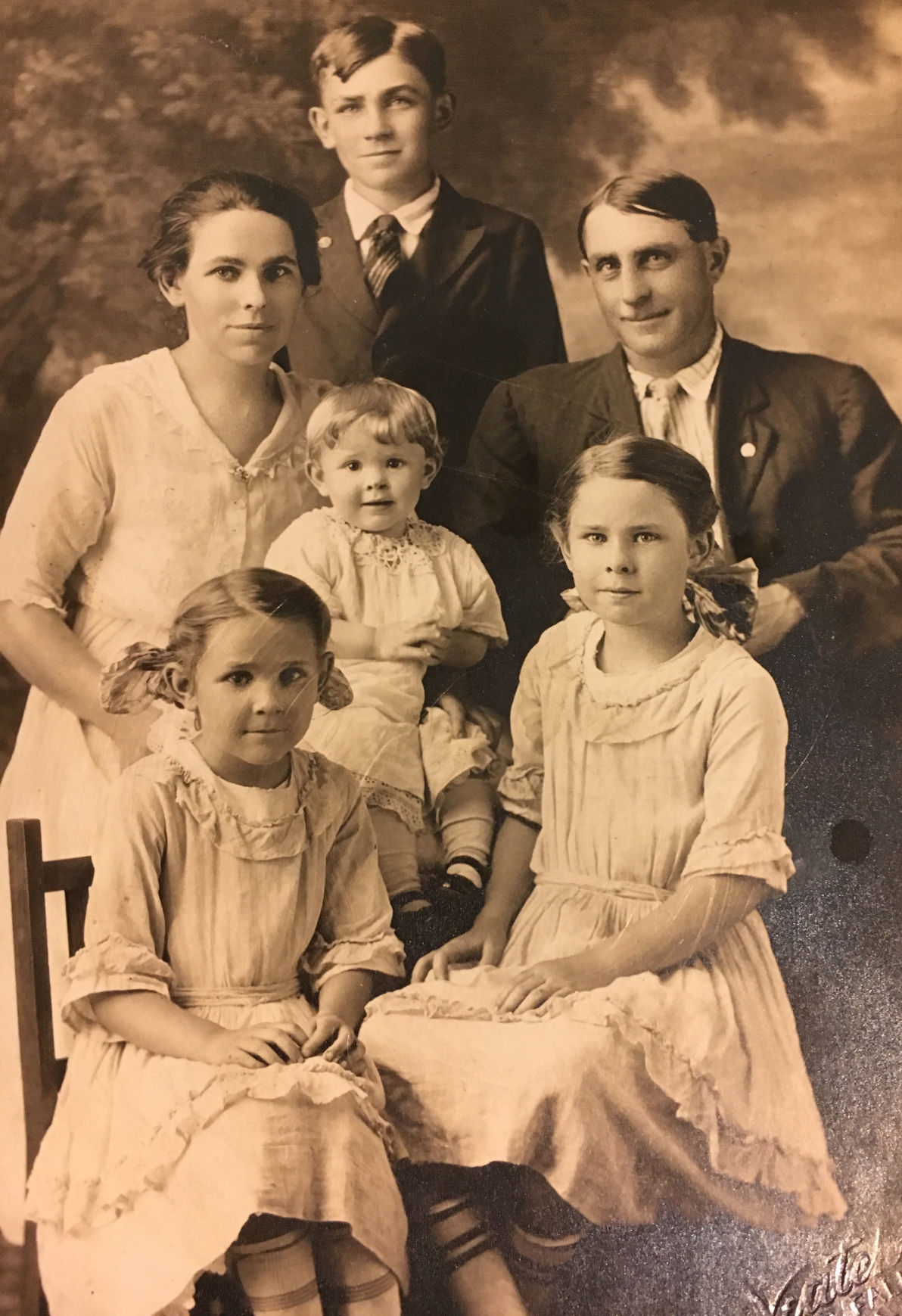 Marcella was born May 21, 1920, the fifth of six children of David and Mary Bagg. Her older brother, Donald, not pictured here, died of the Spanish flu pandemic of 1918.

Above: Marcella Hope poses next to a display honoring her 100th birthday at New Aldaya Lifescapes in Cedar Falls. Left: Marcella saw her family through a double glass door on May 21. Below: During Marcella’s 99th birthday, she got some assistance blowing out the candles from her great-great-grandson, Clay Renner, then 5, of Janesville.

Marcella saw her family through a double glass door on May 21.

During Marcella’s 99th birthday, she got some assistance blowing out the candles from her great-great-grandson, Clay Renner, then 5, of Janesville.

Left: Marcella’s 6-year-old great-great-grandson Clay wrote this note for her 100th birthday. Above: William Hope and Marcella Bagg were married in 1940.

Marcella was born May 21, 1920, the fifth of six children of David and Mary Bagg. Her older brother, Donald, not pictured here, died of the Spanish flu pandemic of 1918.

It has been in the making for 100 years.

A century of world events, personal history and memories.

What Marcella Mae (Bagg) Hope has to show for it culminated in a celebration on Thursday at New Aldaya Lifescapes, the nursing home where the Cedar Falls native has been living since last year.

It was an unusual birthday not just because of the milestone Marcella had reached. That in itself would have been a special reason to celebrate.

Because of the global pandemic, which, among other restrictions, closed nursing homes to visitors and limited to 10 the number of people who could be present at public events, Marcella greeted her family through a double glass door.

Wearing a purple shirt and a purple tiara, a bouquet of purple and lavender balloons floating beside her underscoring her favorite color, Marcella beamed.

The message on her shirt summed it all up in sparkling silver: 100th birthday diva!

In groups of five, family members and friends streamed in on three separate occasions during the day to share a wave and a smile with the birthday girl.

The guests were wearing masks even though the “conversation” was taking place on the opposite sides of the door at the nursing home’s Memory Unit.

Marcella, too, was wearing a mask, and her caregiver, in addition to a mask, sported a face shield, which in “normal” times would have make her look like an astronaut, but in COVID-19 times reinforced the safety protocols in the facility.

The sprightly centenarian, who spoke to Waverly Newspapers earlier in the week through Zoom, and along with family members, said she was looking forward to the party.

She had received dozens of cards, and had read them all.

One of them was from her great-great-grandson, Clay Renner.

The 6-year-old was also part of the Zoom interview with the paper, and he made Marcella laugh hard when he showed her what the tooth fairy had done with his front teeth.

It was clear that despite the generational divide, and the sound delay, not to mention the whole new experience for Marcella to talk to an iPad screen, the interview brought out a lot of family history.

Born on May 21, 1920, to David and Mary Bagg, of Cedar Falls, Marcella was the fifth of six children.

The Baggs raised their family at 515 Grant Street in Cedar Falls, but the house no longer exists. Marcella’s father worked at Viking Pump, and her mom raised the kids.

Just before Marcella was born, her brother, Donald, died during the Spanish flu of 1918.

Marcella had heard stories about him, and in the interview with the paper said she wished the current pandemic was over soon, so she could go visit her younger brother, Herbie, who lives in Mexico.

The two are the only remaining siblings and are very close, and for Marcella’s birthdays, when Herbie’s daughters come to visit every year, they facilitate an online chat between the siblings.

This year, Herbie’s three daughters — Cheryl and Charmaine, of Georgia, and Linda, of Florida — had to cancel their planned trip for their aunt’s centennial birthday. The sisters kept hoping things would change and only canceled at the very last moment in late April.

Other family members — a grandson who lives in Hawaii, Pat Woulfe — also canceled last-minute as did others from Colorado, Missouri, Florida, and Georgia.

That was a big disappointment for all.

“This has gotten to be a tradition when everyone takes time out of their lives to come to her birthday, “ says Linda Mather, Marcella’s second daughter.

Being a Cedar Falls resident, Linda, a retired John Deere worker, among many other jobs, went to see her mom for the 100th birthday with her husband, Curt. The two had just ended a quarantine period after returning from Arizona.

“It was very emotional because we could not touch her, or even hear her well,” Linda said. “Her caregiver helped us communicate, she would repeat what we said to her and then tell us what Mother said to us.”

This mediated communication, which under other circumstances would have been a private one, has turned the caregivers into extended family members, Linda says.

She told this writer she had enjoyed a happy life and never expected to be a hundred years old.

Widowed in 1974, when her husband died suddenly at the age of 57, she kept going, although the transition was as hard as it was painful.

With the help of family and friends, she gradually adjusted.

Her high school friends — who were also widowed eventually — formed a tight circle. The women traveled around the area, meeting for lunches, conversations and laughs.

The companionship kept the women pushing through life — the youngest one, Ruth Morman, is still going strong, and one of the friends, Cleone Read, passed away at the age of 99 in 2018.

“The death of her dear friend pushed Mother to make it to her 100th birthday,” Linda said.

Marcella attributed her longevity to her love for walking, and often went all the way from her apartment all the way to downtown Cedar Falls, just to get some fresh air.

Meanwhile, her chocolate chip cookies always drove family and friends to her house

“Half of the world knows about her cookies,” Linda said.

Debbie Renner, Linda’s daughter, said the Marcella’s cookies are often a subject of conversation, especially now that she no longer makes them.

What has remained, though, are the memories and the love that the family matriarch has fostered in those around her. In return, Marcella herself has been surrounded with a lot of love.

Marcella’s granddaughter, Betsy Smith, of Waterloo, has been a force to be reckoned with when it comes to attending to Marcella’s care.

One small but telling detail is how instrumental Betsy has been in organizing the centennial celebration.

Since butterflies are one of Marcella’s favorite creatures, Betsy made sure the cupcakes for the nursing home residents were adorned with decorative butterflies and of course, purple icing.

Granted, Marcella’s birthday was not a big get-together like her 95th birthday when 115 showed up in person and a local business — Clark & Associates — donated the premises for the big tp-do.

Hugs were not allowed because of the pandemic, but love was overflowing in big and small ways.

And judging by Marcella’s spirit, there’s more to come. She was anxious for the pandemic to be over so that the family could start visiting her in person.

But in taking away the personal touch, the pandemic might have inadvertently gifted humanity with finding creative ways to express love in actions and words.

Here is how 6-year-old Clay, of Janesville, described his affection in his own words and spelling in his hand-made card to his great-great-grandmother:

“I am sorry that nowun kums too you in tell the viris is ovre. But you stil have me.”

During the Zoom interview with the paper, Clay and his sister, Evan, 2, waved to Marcella and told her how much they loved her.

The little boy and Marcella have a special bond. He was there for her 99th birthday and even helped her blow out the candles.

However, Mercella’s 100th was a memorable slice of family history in its own right. The isolation created by the virus was conquered by love and technology.

“I have never had a birthday like my mother’s had,” Linda joked. “She has had so many beautiful birthday parties and she may keep going... it is because of the love she gets. It pays to be a diva.

Cloudy with occasional rain...mainly in the morning. High around 75F. Winds N at 10 to 20 mph. Chance of rain 100%. Rainfall around a quarter of an inch.

Some clouds early will give way to generally clear conditions overnight. Low 51F. Winds NNW at 10 to 15 mph.