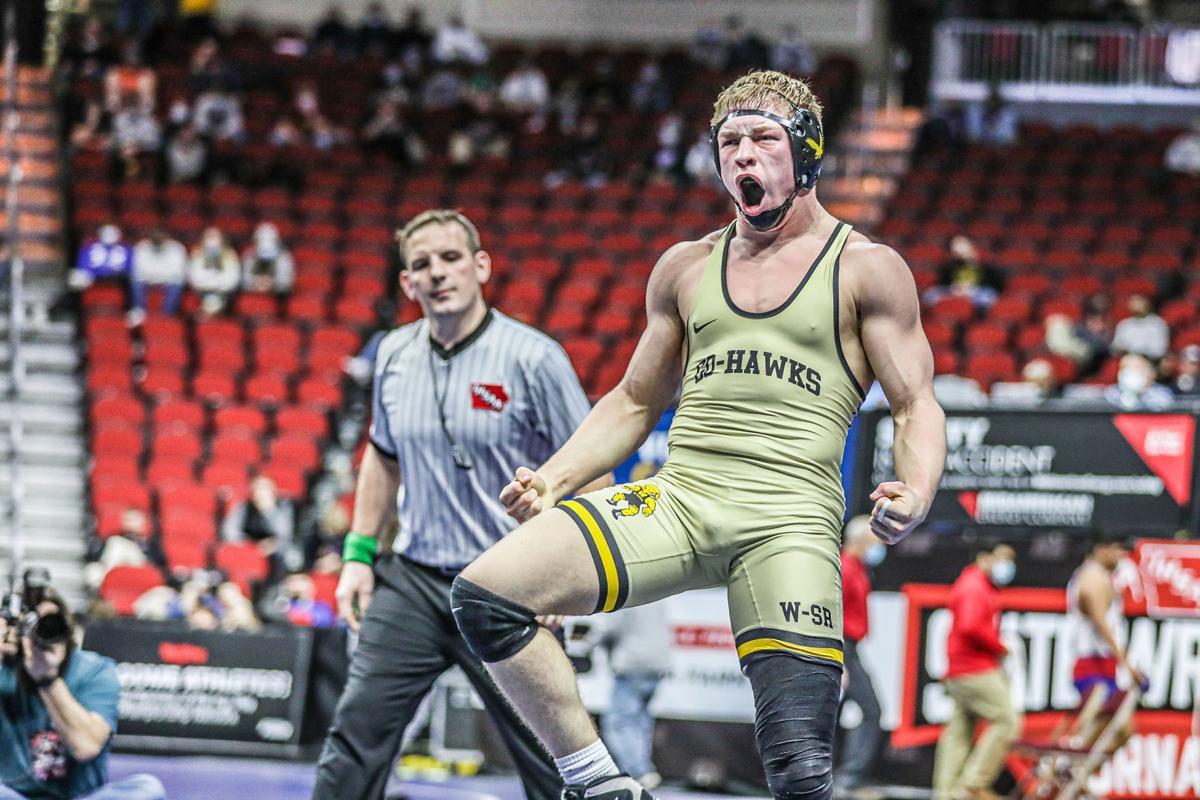 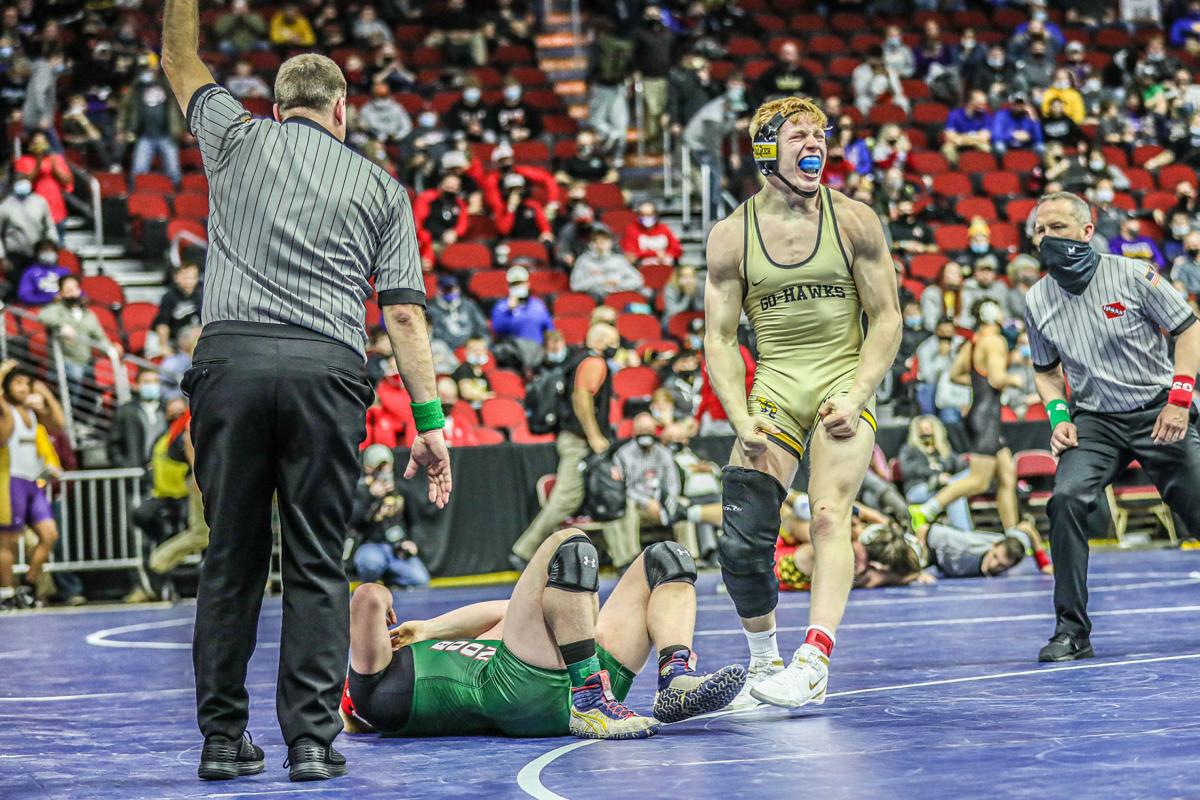 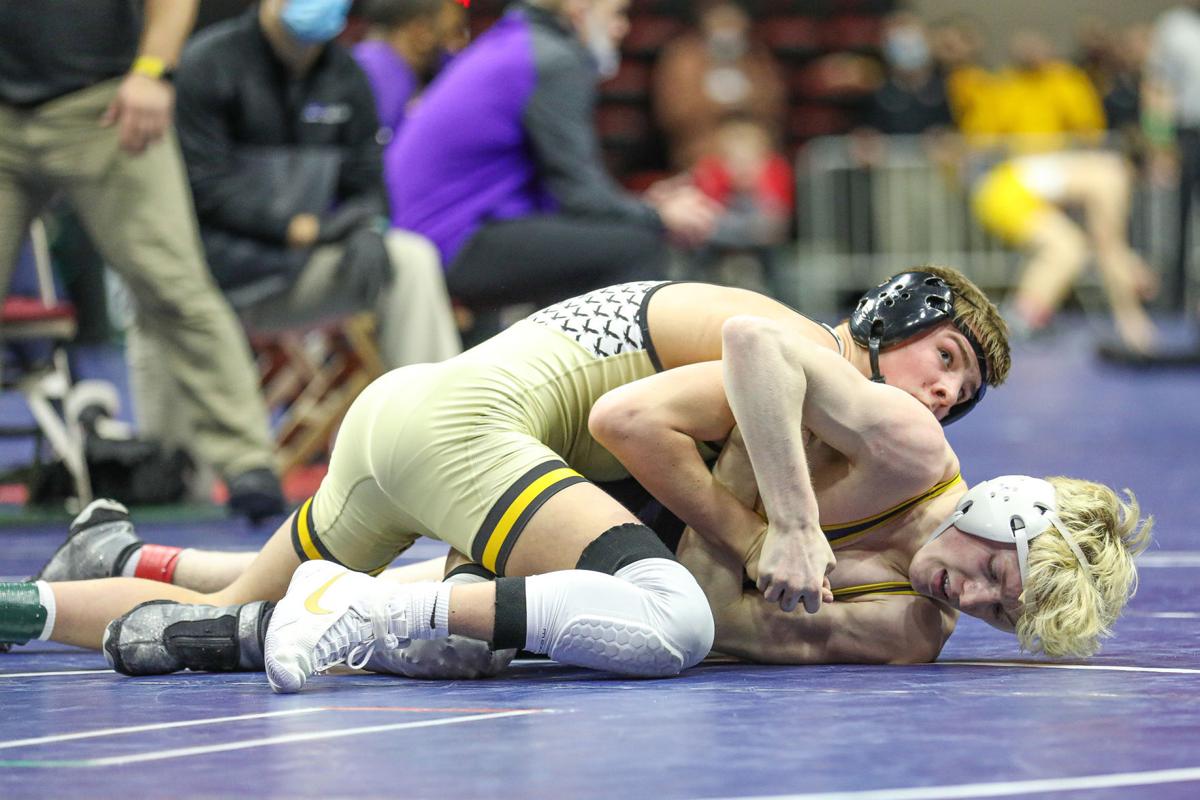 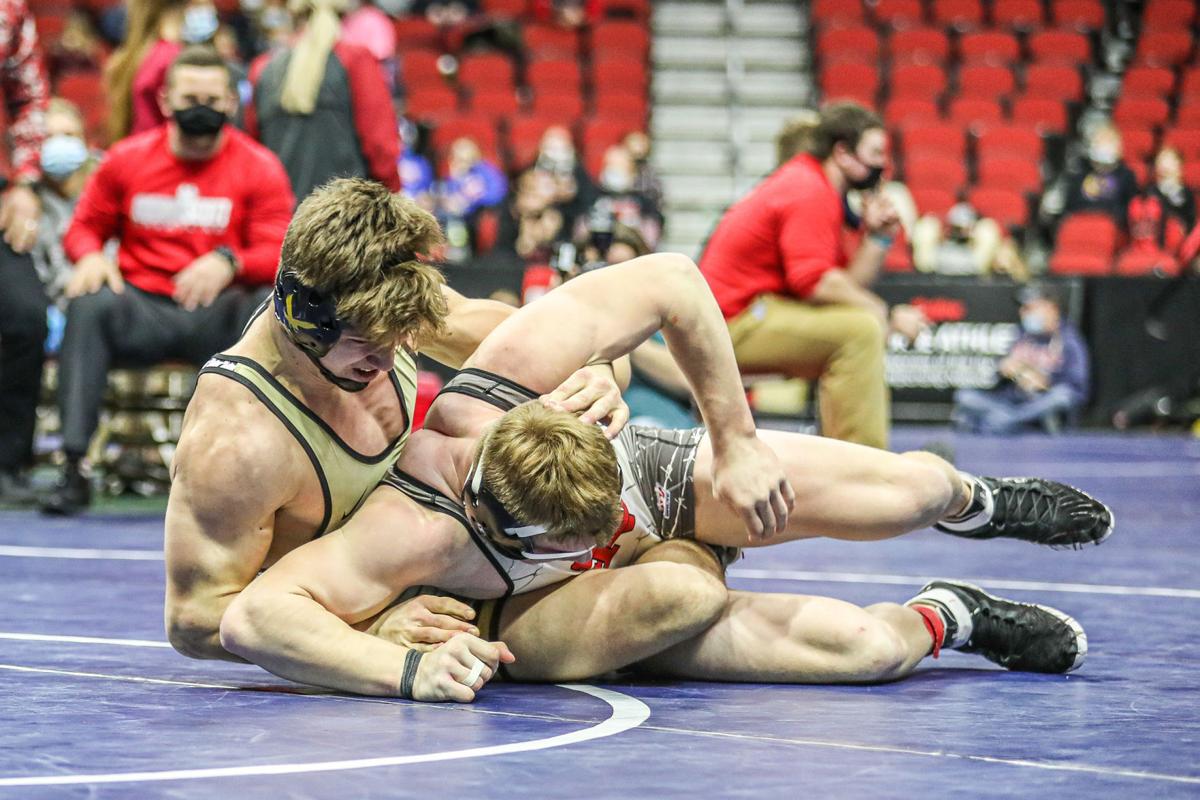 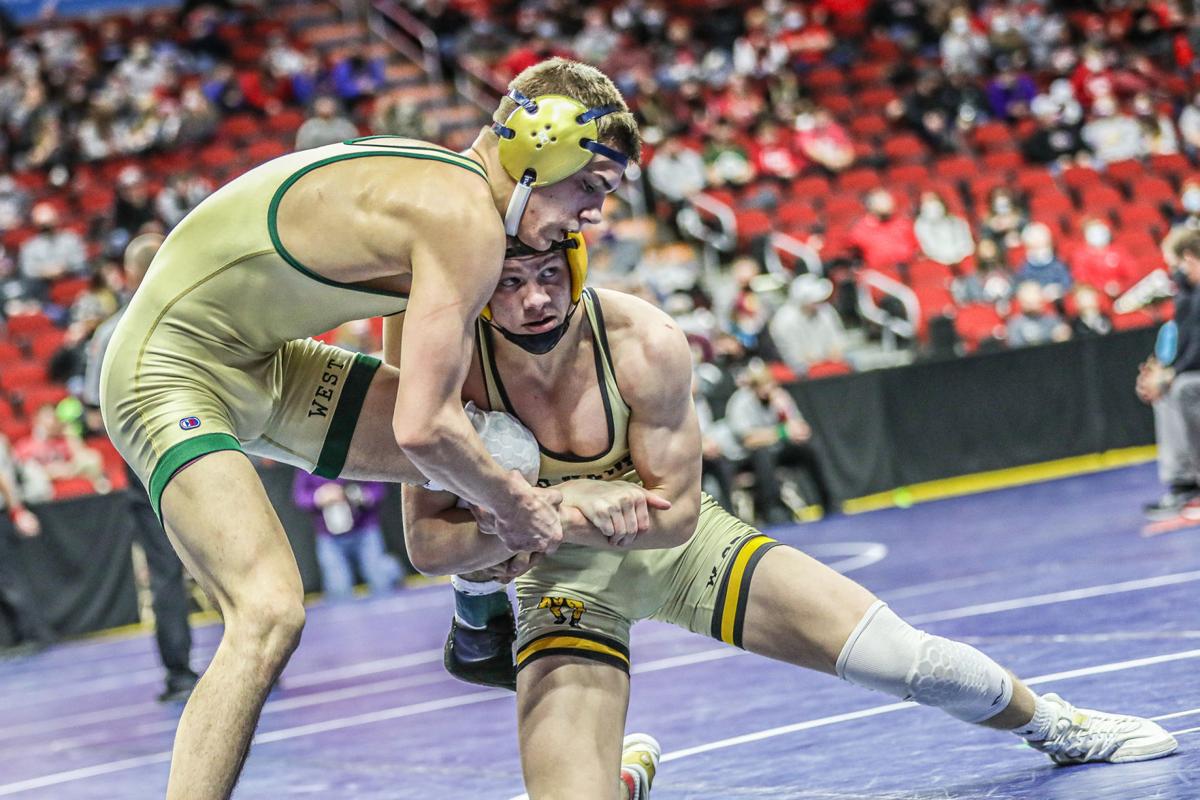 DES MOINES – Knowing it was going to be a “war” to win the Class 3 Iowa High School Athletic Association team state championship, Waverly-Shell Rock laced up its work boots and broke out the heavy artillery Friday night.

Five Go-Hawks punched their ticket to the Saturday night’s finals at Wells Fargo Arena, and they did so in convincing fashion while jumping ahead in the team race. The Go-Hawks ended competition Friday sitting in first place with 134.5 points. Waukee, who had held down the first-place spot, is in second with 126. Southeast Polk is third at 99.

“We talked to the kids about finding a way tonight,” W-SR coach Eric Whitcome said. “We knew that every match was going to be tough, and every match at this point in the tournament, it doesn’t matter how bad you’ve beaten someone before or how bad they’ve beaten you, every match is tough. Our kids did a great job of battling and keeping themselves in matches and giving themselves a chance to win in the end.”

Ryder Block rode his way to his second straight finals appearance and was the first Go-Hawk to secure his place in the finals. The sophomore and defending state champion earned a 5-1 decision over Indianola’s Ryder Downey.

The path to a potential second consecutive state title has been a taxing one for Block. He jumped up five weight classes this year and dealt with questions regarding his ability to compete at a higher weight. What’s more, he tore his meniscus at the beginning the season, had surgery to repair the injury but missed the first half of the year.

“There was a lot of doubt this year,” Block said. “I’ve got a chip on my shoulder trying to prove that I can, and it’s motivating for me because I want to be the best and I want to prove everyone wrong that says I can’t do it when I know I can.”

Block’s win helped set up a final match everyone has been gushing about all week with Fort Dodge’s Drake Ayala. The two met earlier in the year with Block earning a 9-7 decision.

“Last time, once I figured out I could actually wrestle with him, I started doing pretty good,” Block said. “Now, I actually know I can score and do what I want. But I’ve got to know that he’s coming and he’s hungry for me, and I’m hungry for him, too. He’s coming up to my weight. I want to win, too, so I’m not just going to sit back and take a backseat to him.”

Like Block, Aiden Riggins has dealt with his fair share of adversity. After placing second at state as a sophomore last season, Riggins had knee surgery, which he spent all offseason recovering from. Then, he had to work himself back into wrestling shape.

He’s now one match away from a state title after scratching out a 4-3 decision over Iowa City West’s Graham Gambrall.

“He knew my single was coming, so we assumed he was going to grab my wrists and slow me down from trying to hit my go-to attacks,” Riggins said. “He was going to try and keep it as close as possible. But I took too many shots; I need to be patient more, but making sure I just grit it out. Advancement is what we need the most, not tech falls, scoring as many points as possible. I mean we want to, but just getting to that next match is the most important thing.”

Sophomores McCrae Hagarty (182 pounds) and Jake Walker (195) also reserved a spot on the big stage. Jake Walker avenged a loss earlier in the season after he scored a 5-3 win in sudden victory over Boone’s Taner Harvey. Hagarty, who has stormed his way through his bracket, earning an 11-3 major decision over North Scott’s AJ Petersen. The two wrestled during Wednesday’s Class 3A state duals, and Hagarty won that match by a 13-8 decision.

The final stamp on the semifinals came from 220-pound senior Luke Walker, who went toe to toe, finally, with Southeast Polk’s Kalob Runyon. Runyon did not wrestle Luke Walker in either of the two times the teams have met.

Runyon moved ahead 1-0 heading into the third period. But Luke Walker notched an escape and, with about 25 seconds left, secured a critical takedown and rode out Runyon for a 3-1 win and a trip to the finals.

“I knew it was going to be a dogfight going out there,” Luke Walker said. “The kid’s good. He’s been running, though. We had to bring him home, show him who the boss was. That’s what we did tonight – broke him mentally, broke him physically, and we took him down with about 25 (seconds) left and we won.”

W-SR senior 120-pounder Bailey Roybal dropped a 9-4 decision to Dubuque Hempstead’s Chad Bellis. Roybal will have a chance to wrestle for third place Saturday. Juniors Carter Fecht (126) and Cayden Langreck (138) will wrestle for seventh, while freshman Zane Behrends (106) is still in the running for third. Junior heavyweight Layne McDonald’s season came to an end during the consolation round early Friday. McDonald finished 31-9.

The Go-Hawks will be busy during the placing matches with three competing Saturday before their five in the finals go at it. Waukee advanced four to the finals, while Southeast Polk qualified two.

Just like it’s been all week, the race for the team title remains close.

“We’re going to have to go make some stuff happen,” Whitcome said.

A mix of clouds and sun in the morning followed by cloudy skies during the afternoon. Slight chance of a rain shower. High 38F. Winds SSE at 10 to 20 mph.