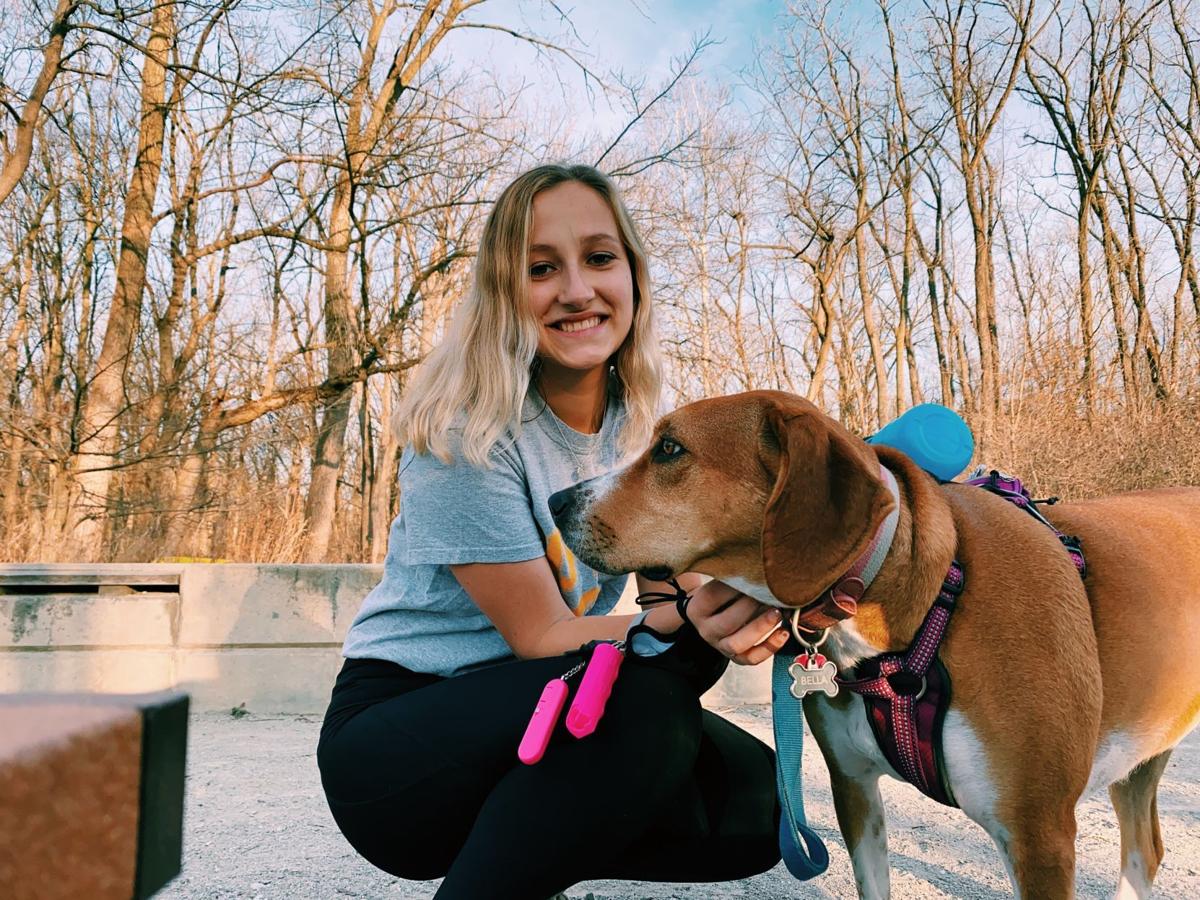 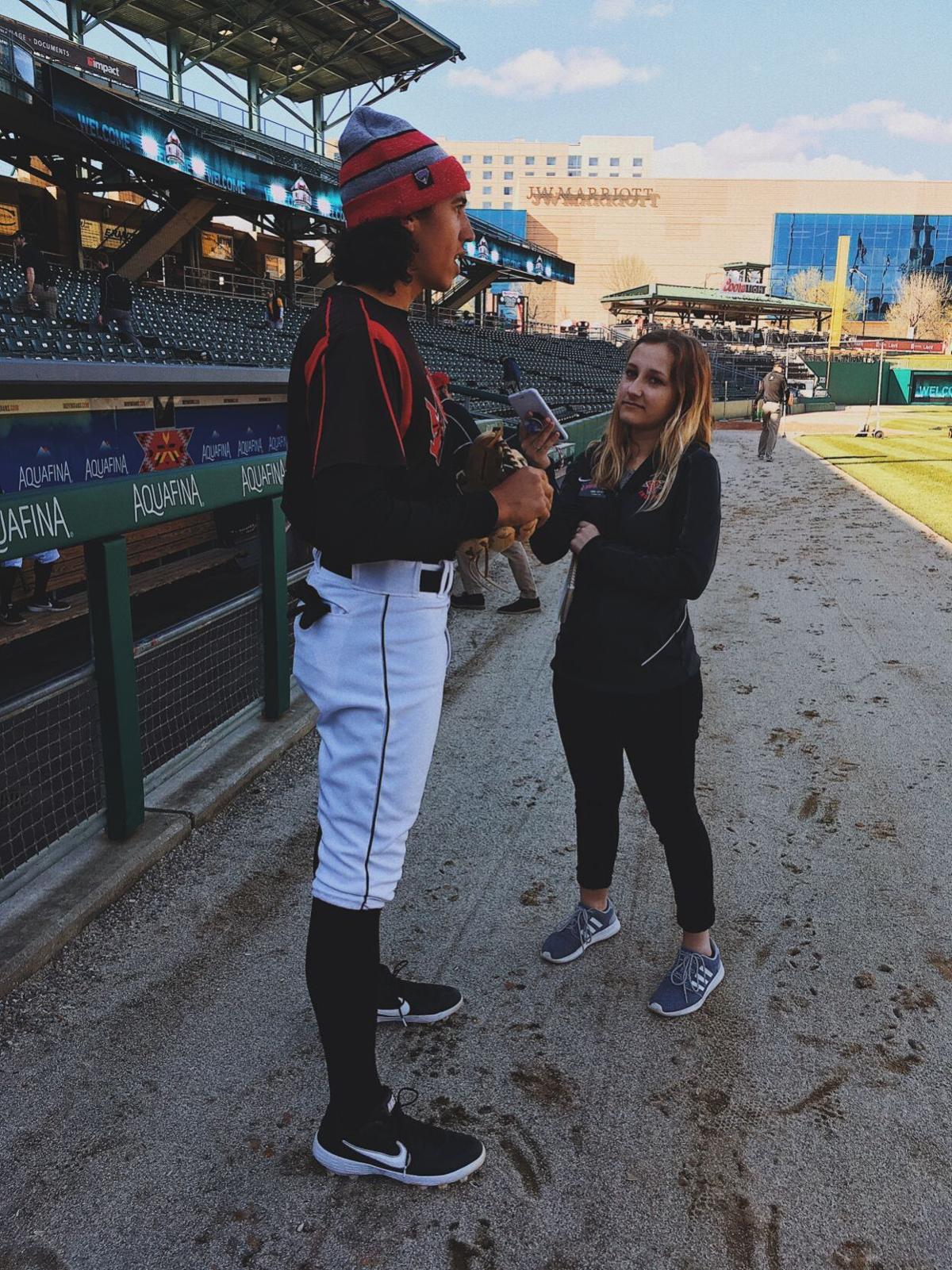 Anna Kayser, in her new capacity as baseball communications coordinator with Triple-A minor league team Indianapolis Indians, interviews Cole Tucker for a story on the Pittsburgh Pirates’ affiliate’s website. Tucker is now a shortstop and outfielder with the Pirates.

Anna Kayser, in her new capacity as baseball communications coordinator with Triple-A minor league team Indianapolis Indians, interviews Cole Tucker for a story on the Pittsburgh Pirates’ affiliate’s website. Tucker is now a shortstop and outfielder with the Pirates.

There are loves you can’t explain.

Seemingly without any traceable roots, they motivate, uplift, and, ultimately chart a life’s direction.

That’s one way to frame the story of Anna Kayser of Waverly, an ambitious recent college graduate who found her two loves early on in life.

Put otherwise, her winning attitude empowered her to blend her passions into a profession, making for a story worthy career path at the age of just 22.

First came Anna’s love for baseball. At Waverly-Shell Rock, she played softball, but baseball had her heart. So much so that over time, she sparked the same passion in her parents and her younger brother, setting the stage for a family tradition of watching ball games.

Her second love — for journalism and the art of storytelling — she discovered while working for The Daily Iowan, the student-run newspaper at the University of Iowa. Anna started there as a metro reporter, then became a political writer, but it wasn’t until she joined the sports desk that she hit her stride.

Feb. 11, the publication won the 2021 Newspaper of the Year award from the Iowa Newspaper Association for a second year in a row, an indication, perhaps, that a new generation of journalists is finding their voice and making a mark in the profession.

Individually, Anna earned first-place in the Best Sports Story category, with a piece called, “Michael Kemerer dominated, 20-0, in his return to the wrestling mat.” The story captured the essence of Kemerer’s return from an ACL injury the year before. His technical fall victory helped the Hawkeyes defeat Tennessee-Chattanooga, 39-0, in the dual.

“It was a great honor to receive the award,” she said. “I did a lot of work and I am really proud of the two stories up for awards. In one of the categories I was up against one of my friends from The Daily Iowan. I was happy for my success but I was also super happy to see him win.”

Anna’s reaction sums up her character well: She puts in the sweat to be her best, but she is happy to rejoice in the success of her peers as well. She is also quick to acknowledge that success is a team effort, and should be celebrated as such.

“The award is an individual award, but I couldn’t have done it without the people I had around me, from editors, to reporters to photographers,” she said.

It so happened that her favorite story, a feature about Tom Brands, the head wrestling coach at Iowa, placed second in Best Personality Feature, and third in Best Sports Feature categories, underscoring the wisdom that reporters and judges often do not see eye to eye.

“I can pinpoint every angle the story went through,” she said. “It was so much fun to write.”

As is well established, awards draw the spotlight onto the work of its recipients and often are the mile markers of a journey in progress, one that had been in the making for some time prior, and another one that continues with even more soul searching after the public recognition.

In Anna’s case, the journalism awards are a testament of the long hours of interviewing and writing and rewriting, and of the collaborative work starting from the editing to the layout and all the way to the printing of the page.

Meanwhile, as a student at the University of Iowa, she had strategically combined her two passions into a double major in Journalism and Sport and Recreation Management.

It was her purposeful application of her work ethic, her drive and her learned skills that eventually landed her a dream internship with the Indianapolis Indians.

Today, the 2016 W-SR graduate works as the baseball communications coordinator for the Triple-A affiliate of the Pittsburgh Pirates.

She started the full time position just three months prior to the onset of the pandemic in March of 2020.

Like many of her peers, whose beginning careers were shifted by the coronavirus protocols, Anna adjusted to the “new normal” on the go.

By all accounts, it’s not in Anna’s nature to bemoan unchangeable circumstances, but rather, work through them. These coping skills came in handy when the minor-league baseball season was canceled.

In the meantime, Anna focused her energies on the task of doing her job and turning to creative solutions to write feature stories about players, create information packages for the media and conduct her daily duties aiming at challenging herself every step of the way.

“I am always striving to better myself whether that be in my work or in my personal life,” she said, “and I am always trying to learn, finding new information, discovering the stories of people I have not met, and getting to share that information with other people.”

Even though opportunities have taken her in another direction, she practices her journalistic skills daily.

Growing from a college student to a young professional has been seamless for Anna.

For now, Anna is enjoying where she’s at, as she has worked hard to get here. In the next five years?

That remains to be seen is the short answer.

As if the duties of settling into a new job and in a new state are not enough for her, Anna now writes as a reporter for IAWrestle, an online publication.

In her spare time, she enjoys taking long walks with her dog, Bella, a cute pup she adopted from the Humane Society last summer. She also dabbles in creative writing.

Living in a metro area as a professional woman is different than living in Waverly, with her parents, Sherri and Jim, Anna says.

“I like living in a big city, but nothing really compares to living in a small town,” she said.

Asked what headline would best describes her own story, Anna summed up her journey so far, with a nod to the two loves she lives:

“I can easily easily write a headline for someone else,” she said. “I’m trying not to focus on myself. I am very proud of my accomplishments, and I am not afraid of saying so, but a headline is a difficult territory for me.”