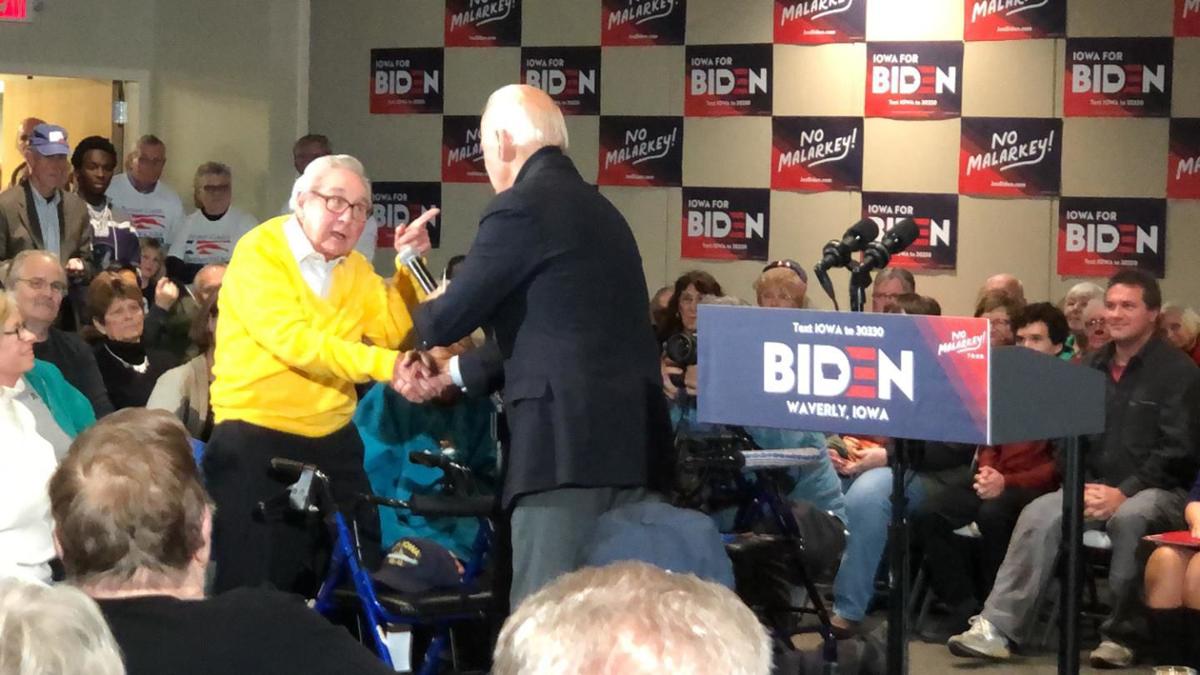 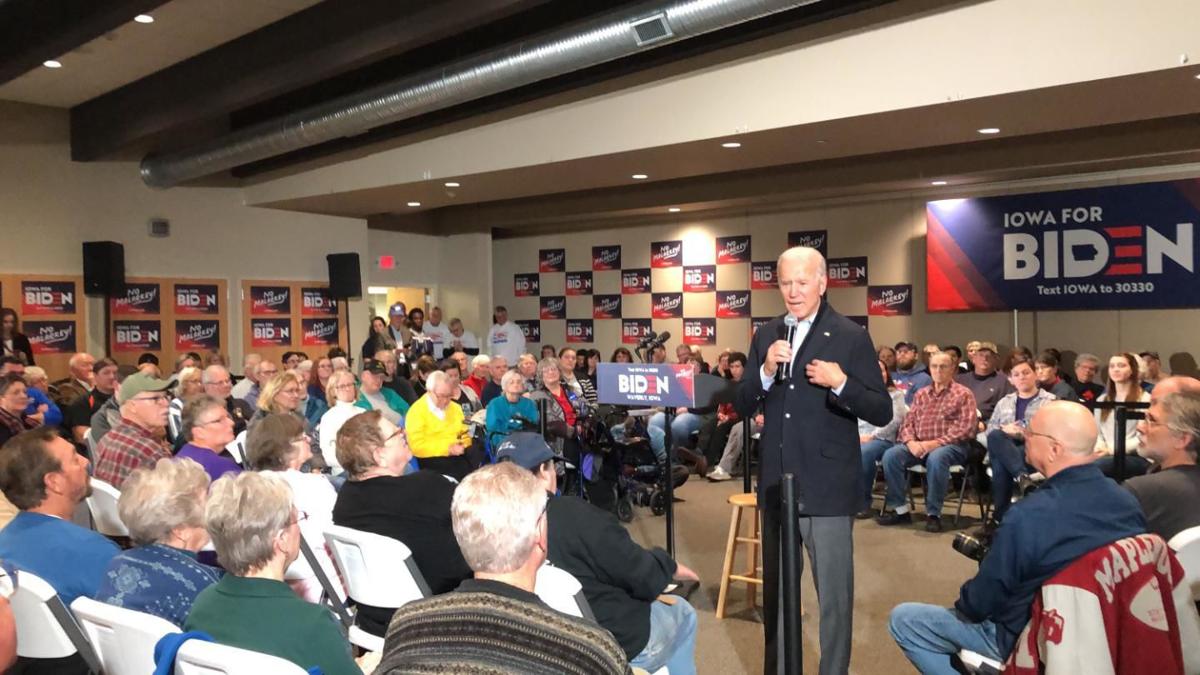 Former Vice President Joe Biden tells an audience of 175 Democrats Wednesday at the Waverly Area Veterans Post why he should be the party’s nominee during his third stop of Day Four of an eight-day “No Malarkey” bus tour.

Former Vice President Joe Biden tells an audience of 175 Democrats Wednesday at the Waverly Area Veterans Post why he should be the party’s nominee during his third stop of Day Four of an eight-day “No Malarkey” bus tour.

Even though his front-runner status in the polls in Iowa has diminished over the last several months in this state’s first-in-the-nation caucuses, which are less than two months away, former Vice President Joe Biden is still considered by many to be the best candidate to face President Donald Trump in 2020.

The latest Real Clear Politics average of recent polls has the long-time politician from Delaware ahead of the former real-estate developer and “The Apprentice” star by 9.9 percentage points, the best margin of the Democratic field.

Biden referred to his polling position several times in his appearance before 175 interested Democrats, mostly gray-haired with some specks of younguns, who filled the west half of the Waverly Area Veterans Post’s Patriots Hall, his third stop of the day Wednesday, the fourth day of his eight-day “No Malarkey” bus tour of Iowa.

He’s also been believed to be a “nice guy,” as one questioner pointed out during a short Q&A following a 40-minute speech.

The gentleman suggested to the former VP that when he “gets on that state with the orange guy from the White House” — referring to the current president — that Biden not be so nice.

“If you can make fun of him, great,” the man suggested to laughs from the audience, “because he’ll lose his nut just standing there.”

Biden said going toe-to-toe with Trump would be similar to some of his experiences.

“I’m used to bullies, no joke,” Biden said. “I was a pretty good athlete in high school… (but) when I was a kid, I used to stutter.

“Most of the bullies I know are cowards. I’ve never backed down from a bully, and I am the last guy that this guy (Trump) is looking to deal with right now on the debate state. But I don’t have to step to, to be myself, to the level he is.”

Earlier in his remarks, Biden referred to the current impeachment inquiry by the House of Representatives. They have been investigating Trump’s July 25 phone call with Ukraine President Volodymyr Zelensky in which the U.S. president is accused of withholding military aid to persuade his Ukranian counterpart to announce an investigation into the former VP and his son, Hunter, who once was on the board of a Ukranian gas company.

Trump is also accused of asking Zalensky to investigate Ukraine’s role into the hacking of the Democratic National Committee’s email server during the 2016 election, which every U.S. intelligence agency had concluded Russian military operatives have done, not Ukraine. Democrats are saying that the announcement of the investigations were meant to hurt Biden’s election chances vs. Trump.

Biden said in Waverly that in the 2016 cycle, Trump said many things that would have ended most campaigns.

However, the former VP said “mud wrestling” is the only place the current president feels comfortable when debating.

He felt the Democratic Party played into Trump’s “game” during the general election season, especially during the second debate between Trump and former Secretary of State Hillary Clinton, the 2016 nominee. Martha Raddatz of ABC News was the moderator of that event.

“I was on the phone … with Hillary’s campaign manager and national chairman … and I said, ‘If the first question is able to go to Trump’ — and they flip a coin for that — ‘you know what’s going to happen. And Martha Raddatz is going to turn and say, “Secretary Clinton, how do you respond to that?”’

“I said, ‘Instead of going down the rabbit hole with him, why don’t you just stand up and say, “Look, everybody knows who Donald Trump is, let me tell what I’m going to do for you.”’ But it’s so hard to overcome the temptation to talk about what he did that it ended up being a constant refrain that he was comfortable being in that area.”

Stemming from the 2016 campaign, Biden said a Harvard survey showed that just 4% of press comments on Clinton related to the issues.

He concluded that answer with while most know who Trump is, Biden wants the electorate know “who we are.” He said Trump supporters aren’t able to vouch for the president’s character even though they may like his policies.

“Find somebody who really says, ‘This guy is a man of great character,’” Biden said. “‘I want my kid to grow up like this guy.’

“I have to let them know I choose science over fiction, that I choose truth over lies, that I choose unity over division, and I choose … hope over fear. We’ve got to communicate that, and the only way to do that is to talk specifically about why he doesn’t meet any of those standards, and I do. My biggest problem is going to be restraining myself.”

Next, one woman addressed the Violence Against Women Act and the “war against women” and she wondered how he would protect a woman’s reproductive rights. Biden said if the Supreme Court, which has a 5-4 conservative majority with two new hard-core conservative justices appointed by Trump, reverses Roe v. Wade, he would ask Congress to codify those protections.

“That’s why we need to increase the numbers that we have in the United States Senate,” Biden said.

He added his effort to defeat the Supreme Court nomination of Robert Bork helped preserve women’s rights for a generation. Bork was tabbed for the court by President Ronald Reagan in 1987, but was defeated by the Senate, 58-42.

Biden said he respects everyone’s rights to privacy, and that even though he is a practicing Catholic, he won’t impose his religious beliefs on everyone.

“What’s occurred in Roe v. Wade is as close as you can get to reaching a consensus that every confessional faith basically acknowledges is, in fact, reasonable,” he said. “There is a right to privacy in the Constitution, which is an unenumerated right, and it allows women to make a choice within reason to a certain place and a certain time.

“Always, in all religions, when there’s a conflict between the life of a fetus and the life of a mother, the life in need is the one that is (protected) in most all cultures, when given the opportunity to be sustained. (Abortion) is a decision that should be between the woman and her doctor.”

Looking back on his role in passing the Violence Against Women Act of 1994, Biden said the culture and attitidudes of men against women needed to be changed.

“People thought I was really being insulting about American culture,” he recalled.

One of his staff members found that laws on abuse were being applied differently between incidents on men versus those on women in many states. He gave examples that rape laws and attitudes apply differently in different situations.

“It is never, never a woman’s fault (she is raped), no matter what she is wearing,” Biden said to rousing applause. “No man has the right to harm her. Never, ever do that.”

Earlier, Biden was asked how he would handle Christian conservatives who would claim some of his policies would violate “God’s plan,” including with climate change, for example.

“I’m going to say that God didn’t say, ‘You do not protect yourself,’” Biden replied. “What God has said is, there is an old expression, ‘The best way to care about people’s wellbeing, you have an obligation to get engaged.’ You can’t just wait for God to come save you.

“That’s not a worry that I have, that is not a problem I would really respond to anymore than against the Violence Against Women Act.”

At the start of the vice president’s speech, novagenerian veteran Maurice Campbell shook Biden’s hand after he recognized all of the former servicemen in the room and told Biden, “Don’t ever forget that war is wrong.”

“I do not,” Biden replied to applause. “That’s why, the reason why we need the alliances that are being shattered right now by this president. That is the one thing that keeps us from coming to war.

“If we do not have alliances around the world, like NATO and Europe… we lead up to the circumstance where failed states continue to occur, as terrorist organizations and stateless actors engage to get access to weapons of significant destruction, we end up having to be the policemen of the world by ourselves. We cannot do that.”

However, he said the U.S. can keep its word to the rest of the world through its alliances, including Article V of the NATO charter that allows member states to defend each other when hostiles attack them.

“We don’t treat it like a protection racket,” he said, referring to Trump’s wishes to have other nations increase their defense spending. “Unless you do more for us, we’ll make sure that we don’t protect you. That’s what’s happening.”

In conclusion to his speech, Biden said four more years of Trump in office would fundamentally change the United States for at least a generation.

“You know, as well as I do, as my mother would say, you know it in your heart, this the most consequential election you’ve ever anticipated in a caucus state,” Biden said. “I’m asking you… to go out and ask for help. If you think that I’m the best candidate to take down Donald Trump on policy issues, then help me out. If not, then help somebody else, but stay engaged. We badly, badly, badly need you.

“Democracy starts Feb. 3 in Iowa in the United States of America.”

On Assignment with Anelia: Dem to Biden: You're a nice guy but can you stand up to Trump in debate