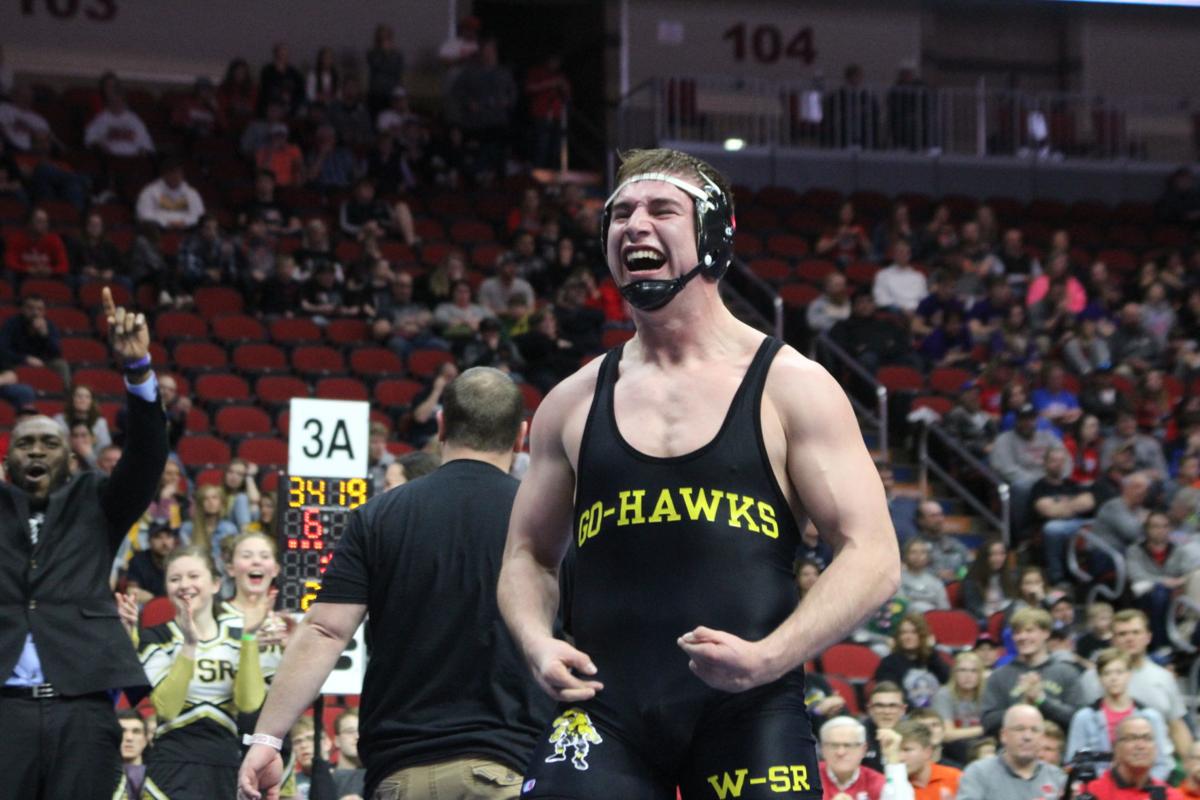 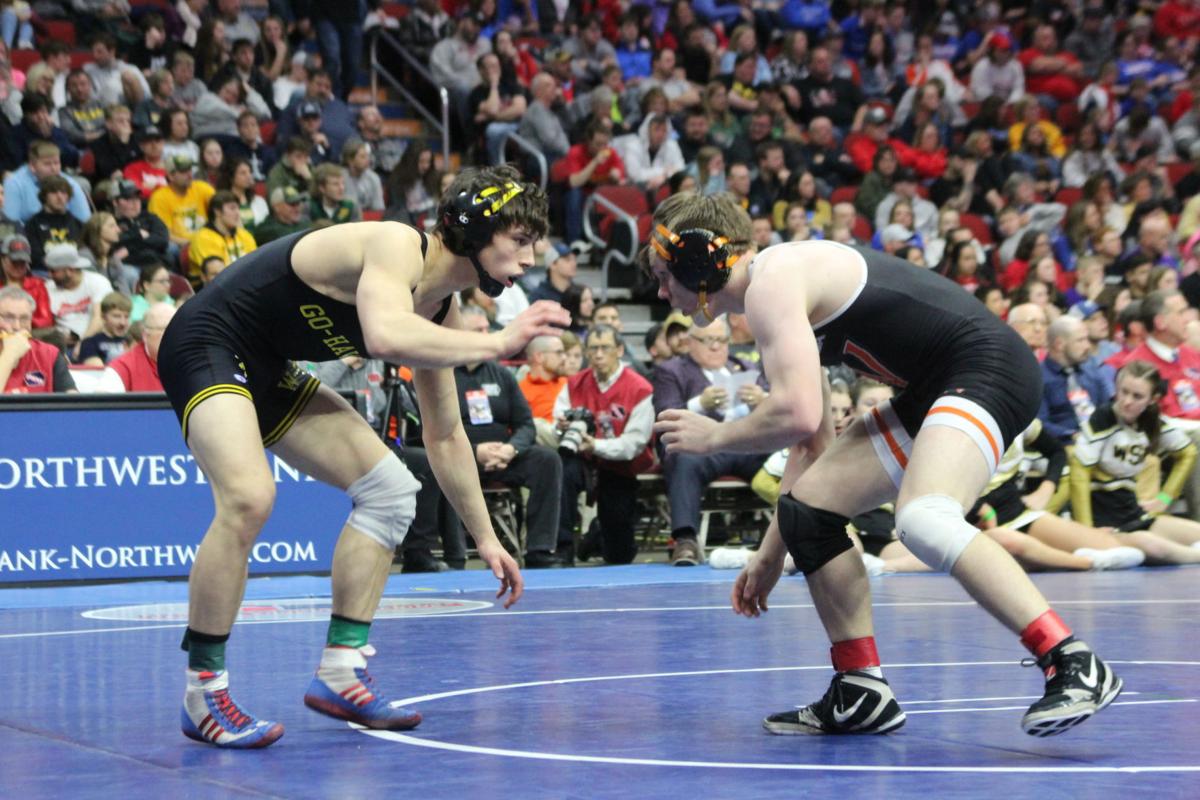 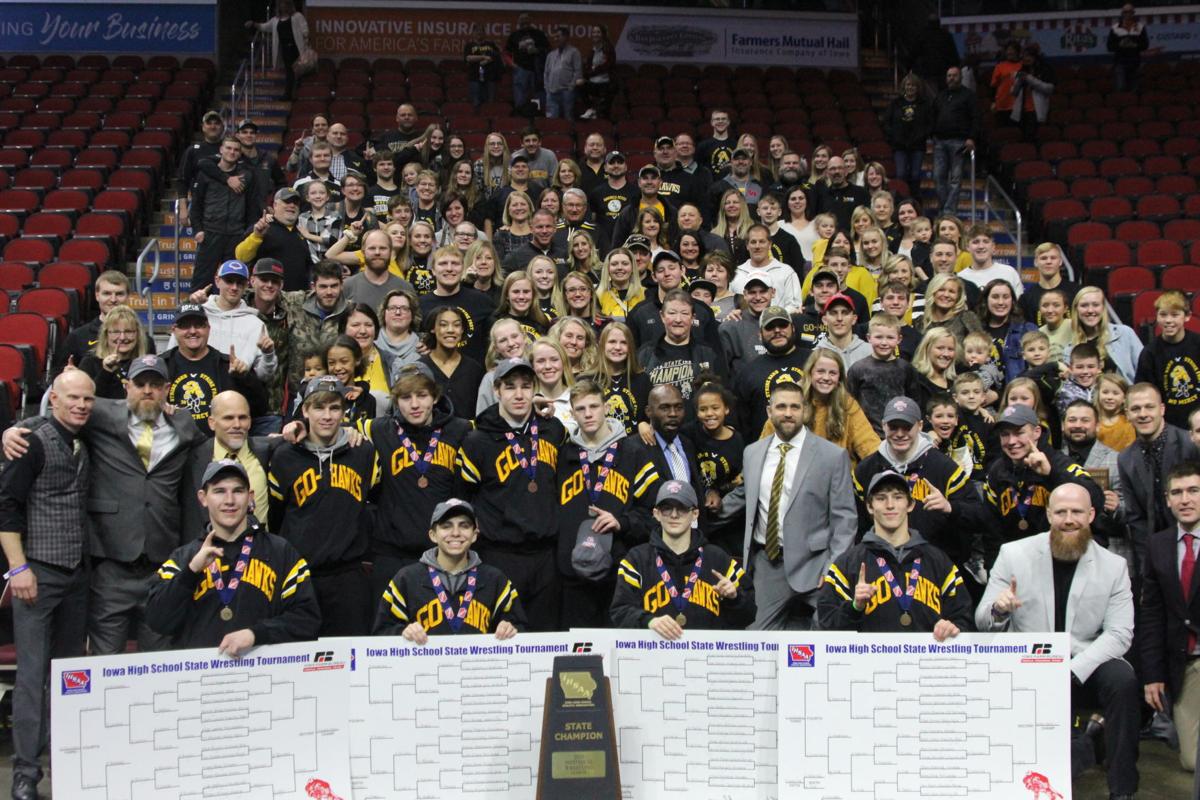 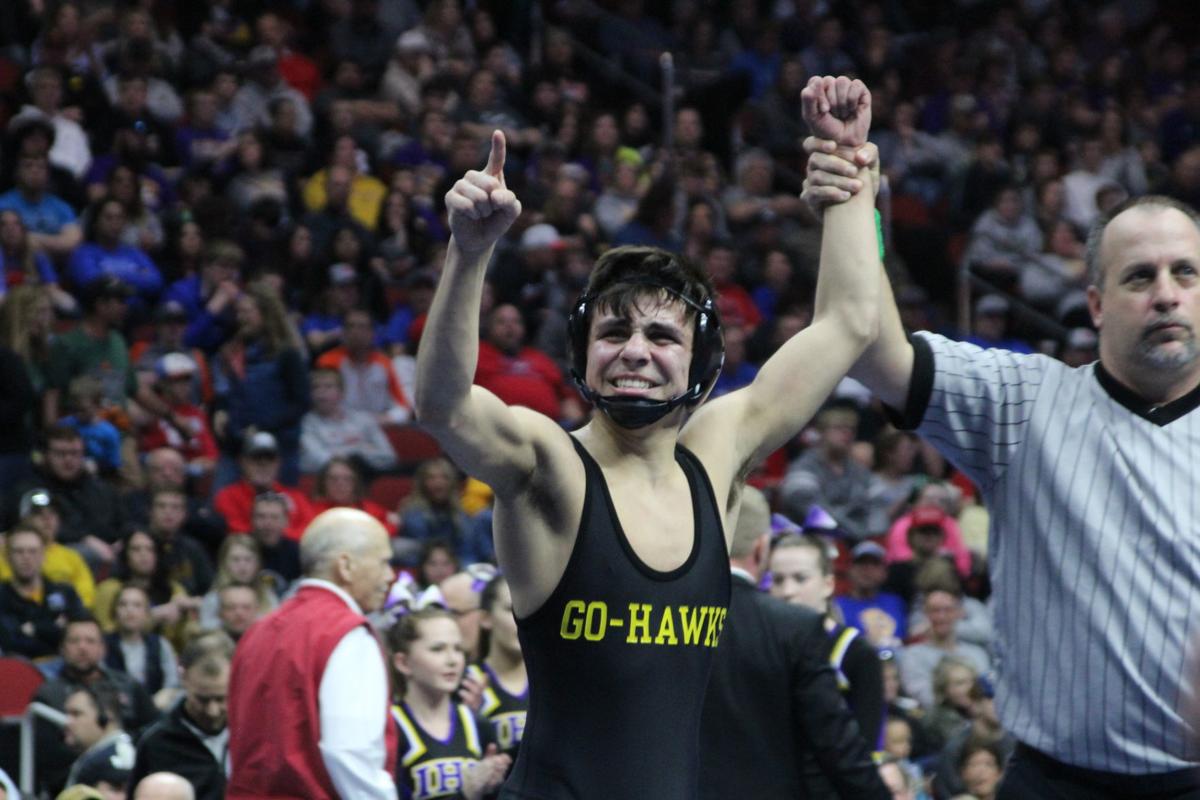 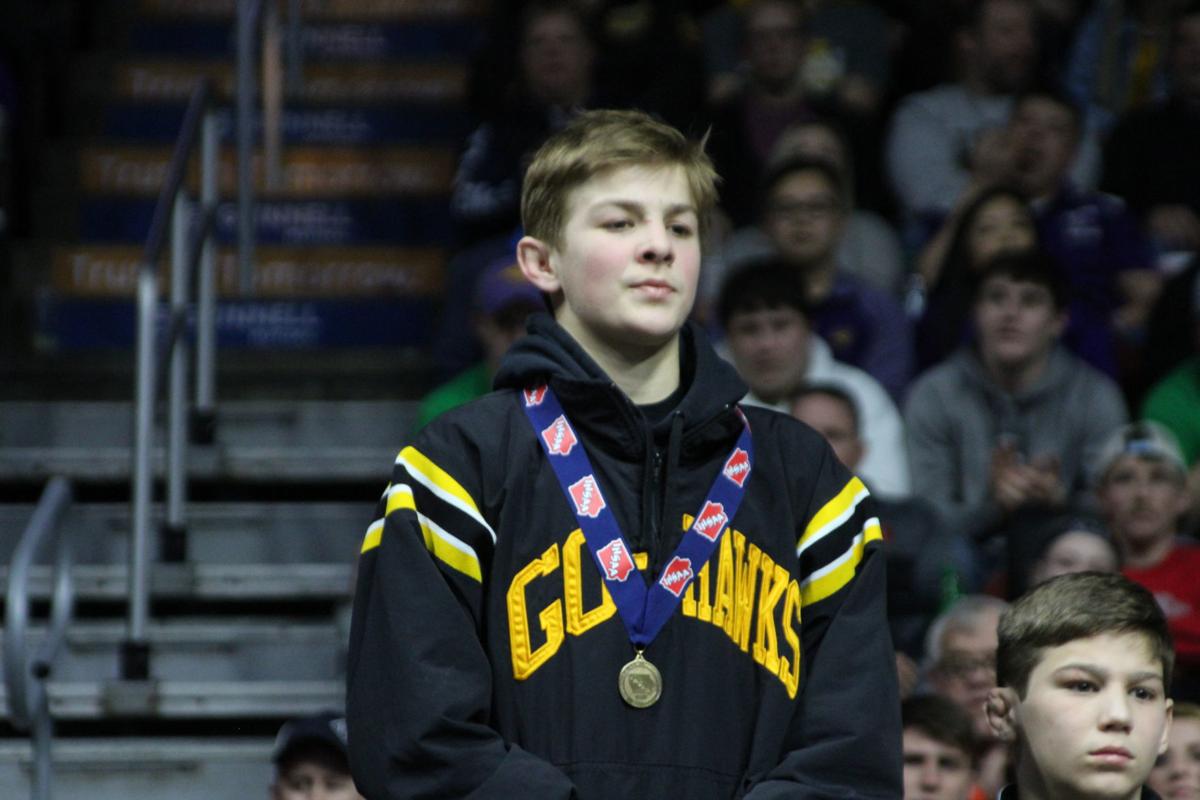 W-SR freshman Ryder Block poses with his new medal after winning the 106-pound Class 3A state championship on Saturday in Des Moines. 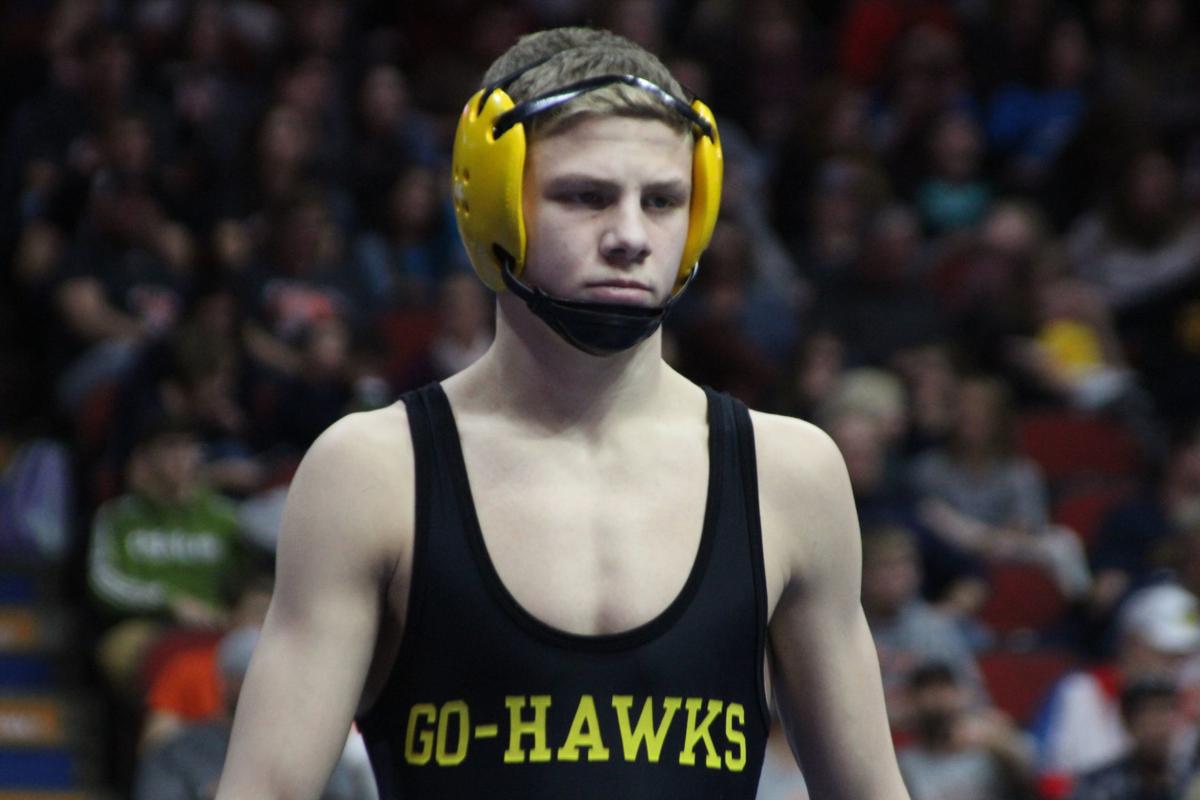 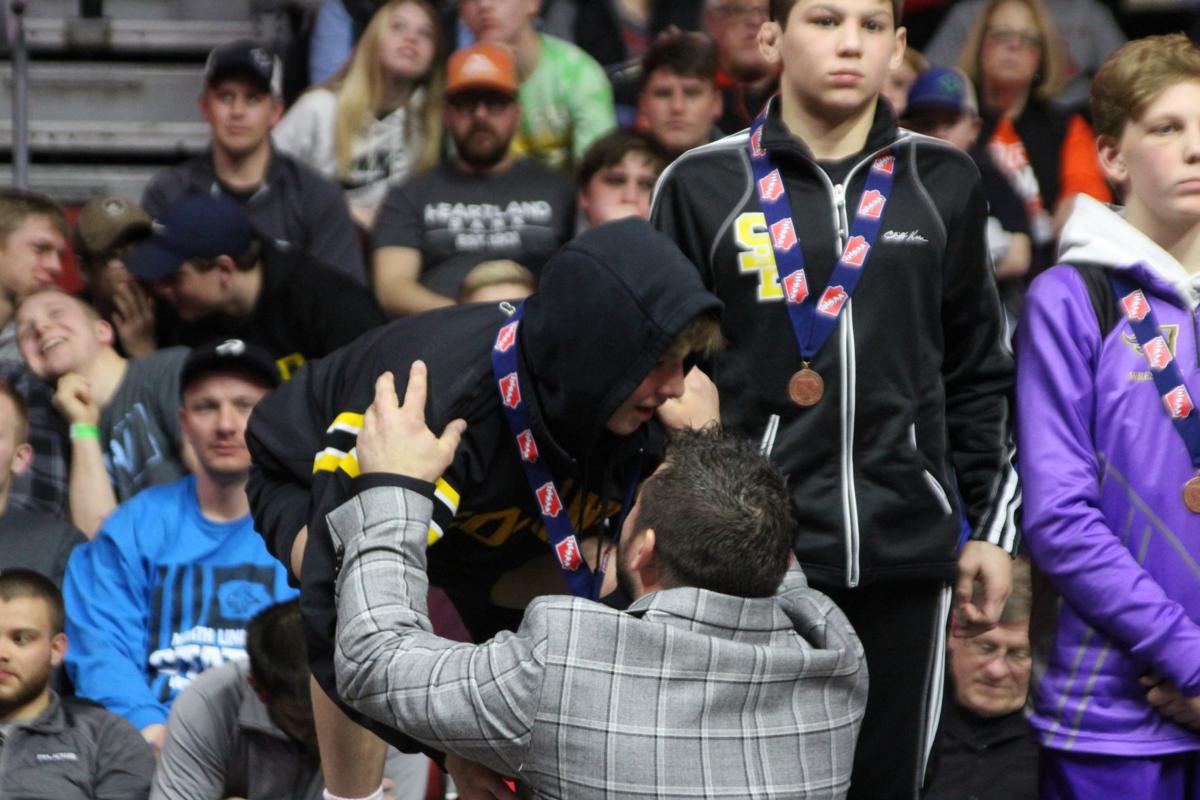 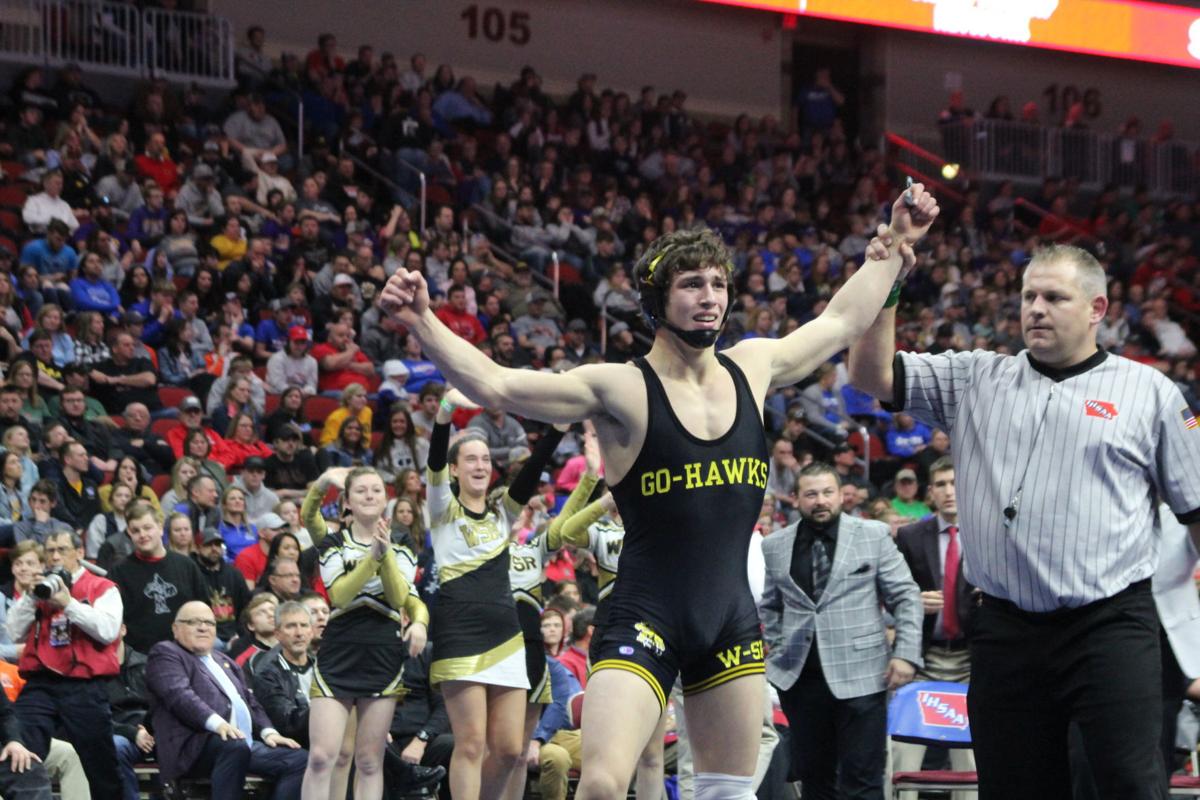 W-SR freshman Ryder Block poses with his new medal after winning the 106-pound Class 3A state championship on Saturday in Des Moines.

For the second year in a row, the Waverly-Shell Rock wrestling team has won the Class 3A state championship.

Also for the second year in a row, the Waverly-Shell Rock wrestling team learned it had won the championship hours before the final matches even begun.

The W-SR players and coaches found out they had mathematically clinched the title around noon Saturday inside the Wells Fargo Arena in Des Moines, right after Carter Proffitt and McCrae Hagarty both placed fourth in their respective brackets.

But when the clock struck 6 p.m. that same day, judging by the fierce looks on the Go-Hawks' faces, you might've assumed they were still trying to clinch if you didn't know any better.

By the time the 16,000 fans packed inside The Well found their seats, legendary wrestling figure Dan Gable finished his opening speech, the Grand March had run its course and a member of the National Guard had repelled down from the rafters, W-SR was still hungry.

The Go-Hawks wanted more. Much more.

"Unbelievable," W-SR head coach Eric Whitcome said. "The semifinal round to put five guys in the finals, and then you go four of five … it was just over and over and over again. Just competing at a really hard level."

"It means a lot," Wolf said. "It’s something I’ve wanted to do ever since I was a little kid wrestling in kindergarten. I saw guys like this on TV winning state titles, and I wanted to do it myself one day. And here we are."

After winning last year's title, Whitcome spent time talking to friends in the wrestling world — including former W-SR coach Rick Caldwell — and they told him repeating is harder than winning the first one.

There are more expectations. There's a target on your back.

Playing the underdog role is fun, he says, while being chased is more stressful.

Which is all to say that winning a second championship in a row is just that much more satisfying.

"It feels great," the coach said. "We got done with it last year, and it was right back to work. The work our kids did ... our coaching staff was phenomenal and why we’re back in this position."

"It’s huge winning those two years in a row," Yant says. "It means a lot to the fans and the community of Waverly-Shell Rock, and it’s good to be back on top."

The freshman Block kicked off the finals at 106 with a matchup against Linn Mar's Brandon O`Brien, and the bout began with O'Brien immediately and aggressively going at Block.

But Block was able to stave off the attack and the first period ended scoreless. After he started the second period down, Block quickly scored 2 points and entered the third up 2-0.

Block extended his lead to 4-0 in the third and ultimately won the match, ending his freshman season with a perfect 44-0 record.

Roybal then followed at 113, but the junior's match against Indianola's Ryder Downey started much more slowly, and the second period ended with a scoreless tie.

But in the third, Roybal pulled off a reversal and finally got Downey on his back. He scored 5 points in the period to win the 113-pound title, giving W-SR its second individual title.

Aiden Riggins entered the 132-pound match as the No. 1 seed and had a good chance to win the state title after coming in third last year at 106, but the stars didn't align for the sophomore.

After Iowa City West's Hunter Garvin got a takedown in the first period to gain a 2-0 lead, Riggins immediately started limping and grasped at his left leg.

While Riggins stuck with it and avoided getting pinned, the injury clearly affected him the remainder of the match and at least partially allowed Garvin to walk away with the 8-1 decision.

In his second year in black-and-gold, Riggins got second at state.

When the 152-pound weight class came around, senior Evan Yant stepped up to the mat and delivered Waverly-Shell Rock its third individual state title of the evening.

Yant opened the match with a takedown to take a 2-0 lead, but Valley's Caleb Corbin erased it in the second period and tied the match. But the W-SR senior retook the lead, 3-2, in the third and was able to hold onto the win despite the match coming down to the wire.

Yant said the takedown in the beginning was important.

"That was huge. Once I got a lead, he didn’t have a chance to slow me down. If he did, I knew I was ok because I was leading."

After another extended period without any W-SR action, another Waverly-Shell Rock Senior, Brayden Wolf, entered the mat for the 220-pound title match.

After he won, he turned toward the W-SR fans and roared.

"It feels freaking amazing," he said. "It’s exactly how I envisioned it. Starting this week, I knew the team would dominate."

It was an amazing way for the senior to end his career, and while Wolf's name will be forever remembered in Waverly, other Go-Hawks are still carving out their legacies.

Guys like Roybal and Block and Jake and Luke Walker still have more to accomplish.

A third straight state title in 2021? Ok, let's give them some time to soak this in before we move on to that.

"Nah," Whitcome said. "We’re not going to think about that tonight."

Cloudy with periods of rain. Morning high of 50F with temps falling to near 35. Winds NW at 10 to 20 mph. Chance of rain 70%. Rainfall around a quarter of an inch.