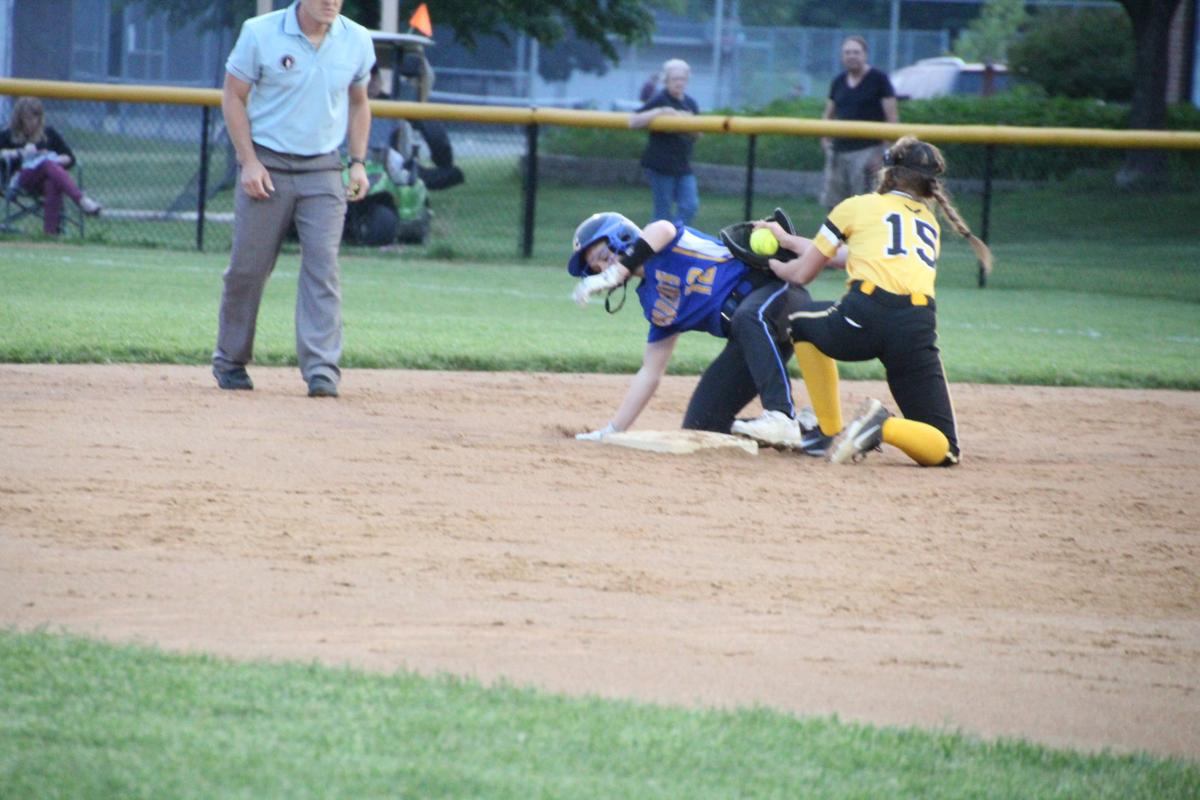 Waverly-ShellRock second baseman Zoe Blanchette (15) tags out Benton’s Jaclen Thys (12) to catch her stealing during the Go-Hawks 12-2 loss to the Bobcats on Thursday, May 30 at Waverly-Shell Rock High School. 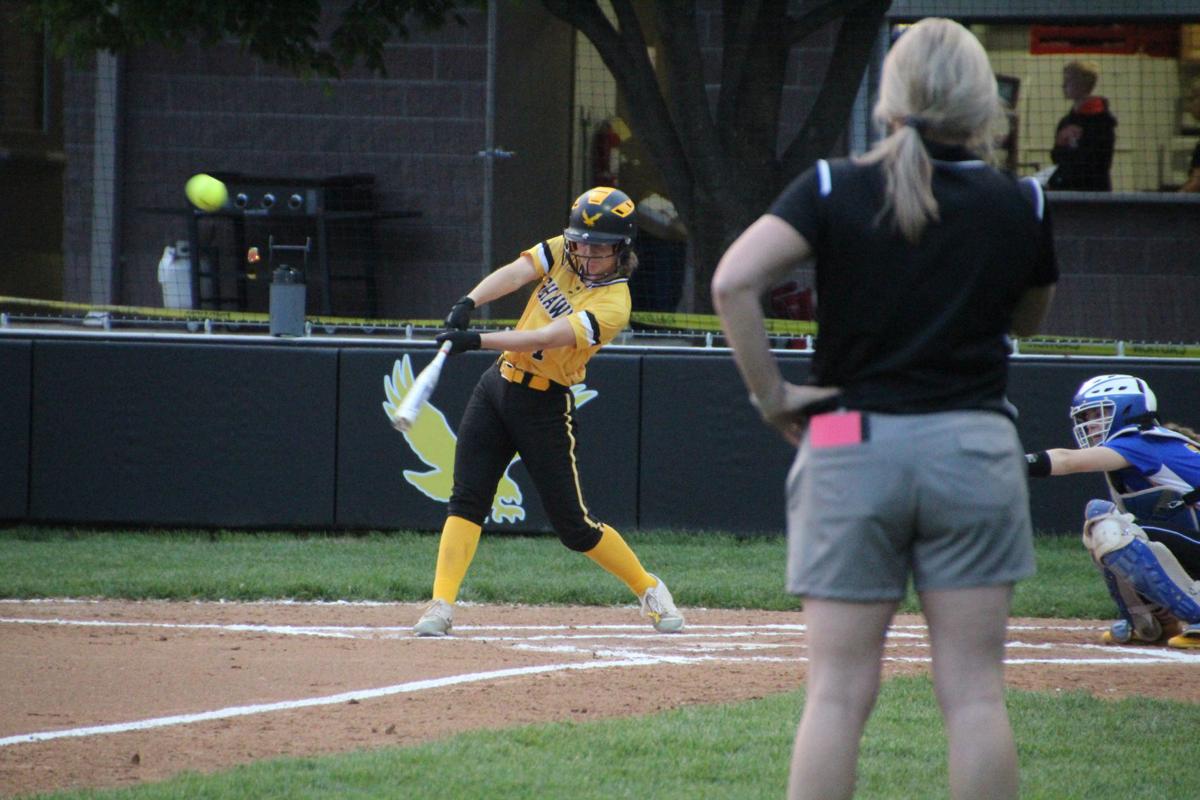 Waverly-ShellRock second baseman Zoe Blanchette (15) tags out Benton’s Jaclen Thys (12) to catch her stealing during the Go-Hawks 12-2 loss to the Bobcats on Thursday, May 30 at Waverly-Shell Rock High School.

The Bobcats’ Kate Buscher and the Go-Hawks’ Avery Beckett matched each other in the circle in the first three innings. However, the Benton bats awoke, while the W-SR defense broke down starting in the fourth inning that eventually resulted in a 12-2 victory for the Bobcats.

Benton coach Eric Stenberg said everything couldn’t have gone better for the Bobcats (2-4).

“We got everyone in to play and really started hitting the ball,” Stenberg said. “We’ve been struggling offensively, and some of our bats finally came alive. The girls are getting a little bit of confidence.

“Defensively, we played well, our pitching was good.”

Go-Hawk coach Heather Zajicek was proud of how W-SR (1-4) started out.

“We played as good as we have all year, so that was exciting to see,” Zajicek said. “In the fourth inning, defensively, we made a few miscues here and there. The fifth, sixth and seventh, I felt we played well, and we just need to play seven complete innings of ball.”

After Beckett sat down the Bobcats in order, the Go-Hawks had an early threat in the bottom of the first. Molly McNally doubled to start the frame, and Jacey Meier singled to advance her to third.

Then with a 0-1 count to Beckett, McNally and Meier tried to execute a double steal. Catcher Brielle Hogan threw through to second baseman Megan Gorkow, which allowed McNally to break for the plate. However, Gorkow threw it back to Hogan to cut down the Go-Hawk center fielder and keep the game scoreless.

In the top of the second, Gorkow singled to open the inning, but then Hogan lined right to first baseman Meier, who then tapped the bag to double off Gorkow.

The Bobcats then got onto the scoreboard in the third inning. With one out, Peyton Pfiffner reached an infield single to short and advanced on a Buscher ground out. She then took third on a wild pitch and scored on a single by Taylor Robinson for the 1-0 advantage.

In the fourth, Hogan singled to right and went to second on a wild pitch. Jaclen Thys then singled to put runners on the corners before Hogan scored on a wild pitch, with Thys also going to second. Emily Finn then drove Thys home with a single to left to make the tally 3-0 after 3½ innings.

The game then got blown open in the fifth with five runs. The first two came on a blast from Angie Gorkow that sailed over the fence just to the right of straight-away center, and the other three were unearned coming off of three Go-Hawk errors.

In the sixth, Angie Gorkow added another with a solo shot to left to make the score 9-0. Then in the seventh, Hogan scored on a throwing error, while RBI singles by Abby Wendel and Buscher put the Bobcats up 12-0.

The Go-Hawks tried to rally against Wendel, in relief of Buscher, in the bottom of the seventh. Beckett and Kaelei Tellinghuisen started with back-to-back free passes, but after a strikeout and an infield fly, Jenna Willey brought them both in with a double to left-center.

However, designated player Brinley Meier was called for being out of the batter’s box when she hit a foul ball for the final out of the game.

Buscher scattered three hits over six innings while striking out seven and walking none in getting the win. Stenberg said his starter had a great night.

“She kept her composure and let her defense play behind her,” Stenberg said. “She kept the ball down. She’s a pretty decent pitcher. I thought tonight that she really pitched well. I know she really feels good about it.”

Meanwhile, Beckett lasted all seven innings, allowing eight earned runs on 17 hits. She struck out three, walked no one and threw one wild pitch while giving up the two homers.

Zajicek said the Go-Hawks are playing for July.

“We’re just coming out each and every game working to improve every time we’re out,” she said. “We know that we’re not going to be a team that’s going to be great on defense. We’re starting a lot of young kids out there that don’t have varsity experience, and we continue to get games under their belt, and they continue to see the type of balls that get put in play that, by the end of the year, June, heading into postseason, July, they’ll be where they’ll need to be.”

Stenberg believes the Bobcats have a lot of work to do as well.

“We’re young in so many spots, and we’re still trying to figure out our lineup a little bit,” he said. “We just need to keep plugging people in and see who can contribute.

“I was proud that every single girl who came here contributed to something positive. That’s a good feeling.”