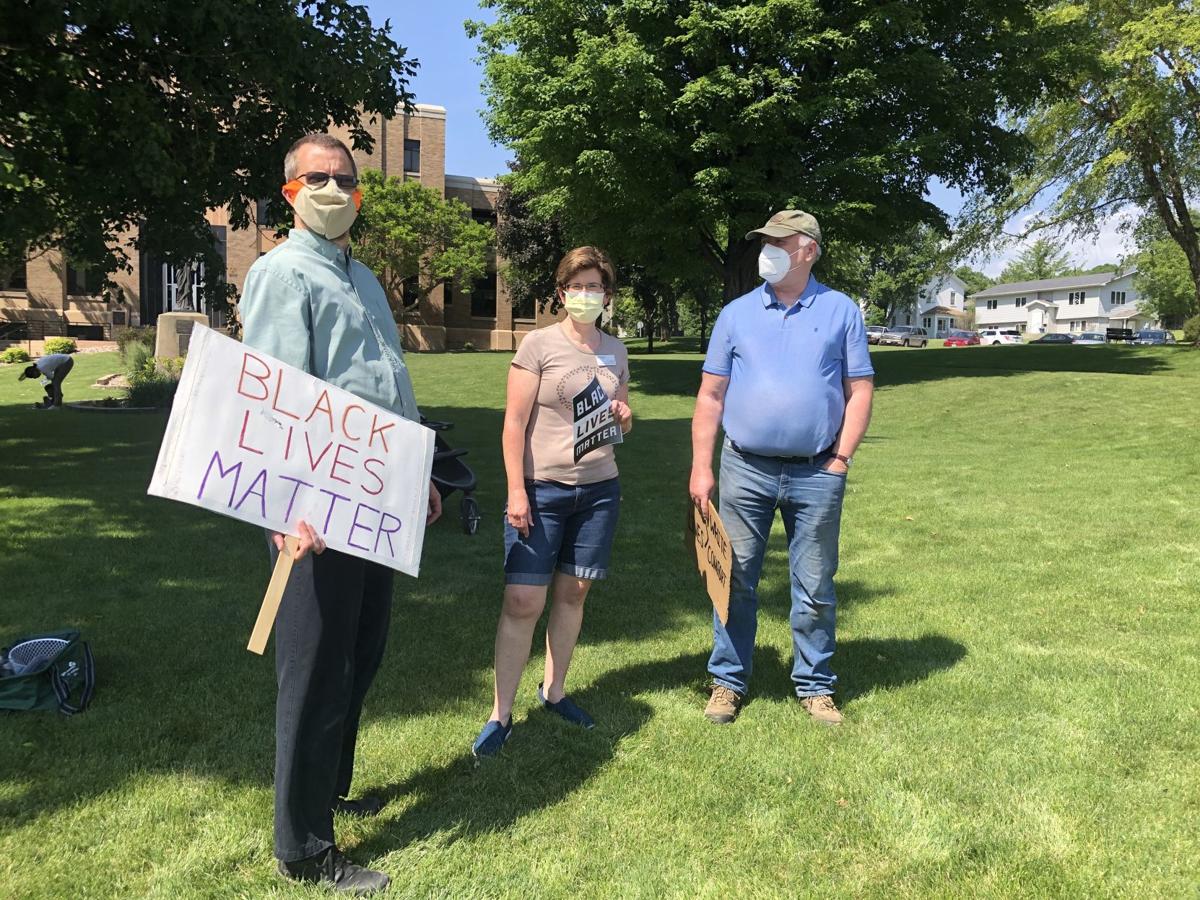 Waverly City Council members Brian Birgen, from Ward 1, Ann Rathe, at-large, and Rod Drenkow, of Ward 3, show their support for the Black Lives Matter cause at the Bremer County Courthouse on June 14. During the July 6 council meeting, the trio were among the members who expressed concern over the fallout from a June 27 baseball game between Waverly-Shell Rock and Charles City. 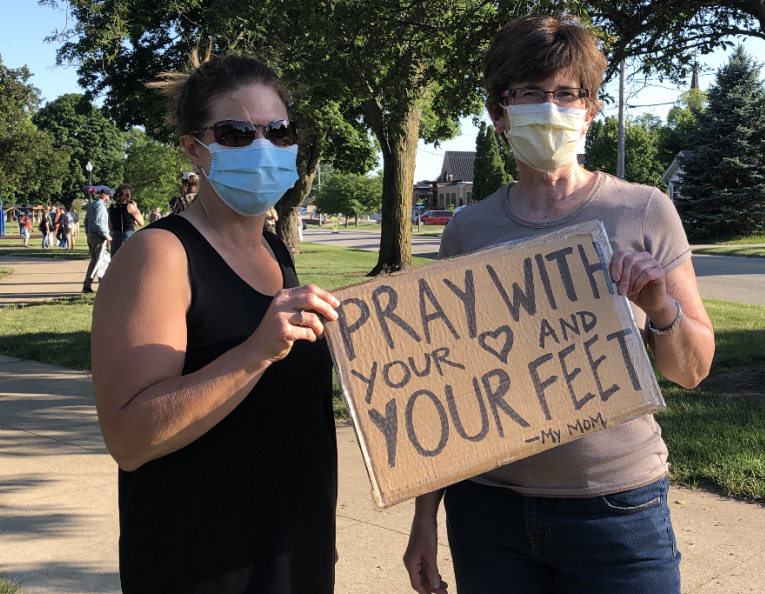 Melinda Pitt and Ann Rathe, an at-large Waverly City Councilwoman, hold a sign that reads “Pray with your (heart) and your feet” during a vigil at Kohlmann Park June 17.

Waverly City Council members Brian Birgen, from Ward 1, Ann Rathe, at-large, and Rod Drenkow, of Ward 3, show their support for the Black Lives Matter cause at the Bremer County Courthouse on June 14. During the July 6 council meeting, the trio were among the members who expressed concern over the fallout from a June 27 baseball game between Waverly-Shell Rock and Charles City.

Melinda Pitt and Ann Rathe, an at-large Waverly City Councilwoman, hold a sign that reads “Pray with your (heart) and your feet” during a vigil at Kohlmann Park June 17.

In the aftermath of racially charged comments reported at the June 27 baseball game between Waverly-Shell Rock and Charles City, which landed Waverly in the national spotlight for racist taunts directed at their opponents’ only Black player, Jeremiah Chapman, several members of the Waverly City Council used their allotted time at the end of the July 6 meeting to take a public stand against racism.

As the W-SR School District continues a Title IX and Equity investigation into the facts surrounding the incident, Waverly’s elected representatives minced no words in condemning bullying and bigotry and in asking for administrative actions.

Councilwoman Heather Beaufore set the tone with a heartfelt admission and plea:

“I have to admit I only had one eye open to the variety of human inequities there are in our community, however due to the recent events in our nation, state and our own community, I now have both eyes wide open,” Beaufore said. “I know now there is a difference between equality and equity, I see now that our community is not perfect, nor will it ever be, but we can always seek to do better.”

She volunteered to serve as the council liaison on a task force for diversity, and noted she was going to challenge herself and her community to educate themselves, and keep an open mind.

“Stop denying these things exist in our community, stop pretending this is the perfect little city, you can start by speaking up against racism, bullying, prejudice and biases, admit the limitations of your own knowledge and do not be afraid to ask questions,” she said.

Several council members have shown public support for racial justice in other forums, including attending Sunday afternoon demonstrations on the lawn of the Bremer County Courthouse since they began in early June, as well as a silent vigil in Kohlmann Park held by St. Paul’s Lutheran Church and headlined by Wartburg Track and Field Coach Marcus Newsom.

At the vigil, one of the council members, Ann Rathe, carried a sign that read “Pray with your (heart) and Your Feet,” a wisdom spelling out the difference between words and actions, bequeathed to her by her mother, Waverly’s former and only female mayor, the late Evelyn Rathe.

But the July 6 meeting was a notable moment in the council’s deliberations, speaking out on race relations together.

During the meeting, Ann Rathe, an at-large councilwoman, did just what her mother had instilled in her — she told the council that it is time for everyone to take the issue of race seriously.

“Even though racism in the North is subtle, we need to be a friendly and welcoming community,” she said.

She praised the local newspaper coverage of the rapport built between two Waverly dads — a local police officer and a Black man — who talked about race and policing, among other things, during a police ride-along.

“That’s how bridges are built and narrowed,” she said.

Rathe’s colleague, Wartburg math professor and Ward 1 Councilman Brian Birgen spoke emphatically about how such incidents take a toll on the community as a whole, harm the town’s economic viability and discourage families from settling here.

“As a result, the reputation of Waverly is being maligned at a national level,” he said. “Somehow, this fan was taught that racist behavior was acceptable. Maybe in the past, these comments were laughed off or ignored, but this time, we need to send a clear message that the Waverly community has no place for racist ideas or actions.”

He said racism continues to be a problem even in Waverly.

“Many cars drove past the demonstration with angry shouts and one-fingered salutes,” he said of motorists’ reaction while he attended the courthouse lawn assemblies. “At the same time, we have housing developments in Waverly, where the original abstracts stated they could not be sold to people of various racial groups, a practice known as redlining. We should not pretend there are no racial problems in Waverly.”

Birgen urged “decisive action” and planning in case a racist incident is repeated.

“If this happens again, would the fan be ejected, would all the fans be asked to leave, would the game be forfeited?” he asked rhetorically. “This needs to be a part of our planning so we can take decisive action in the face of racial violence against underrepresented groups in our communities, rather than look foolish in the national media reporting.”

Birgen wanted to know if the city has a policy if one of its employees displays racially inappropriate behavior, and City Administrator James Bronner referred him to the employee handbook.

“This is simply not acceptable from city employees,” Bronner said.

Ward 5 Councilman Tim Kangas, a school teacher, and a sports official with the Iowa High School Athletic Association, also shared his frustration with the situation. He said the expectation of sportsmanship behavior is spelled out by the IHSAA and Iowa High School Girls Athletic Union, and at Iowa high school games, a sportsmanship statement is read over the public address system, reminding players and fans they are accountable for their behavior.

“I was disgusted, it reflects on the entire community,” Kangas said, “It’s not just a school district thing, it’s a community thing.”

Guest Councilwoman for July Stacey Johnson, now on her first council meeting, said educating young people is the way to go. She added she struggles with the concept of pointing a finger at an individual.

“Point the finger that this is wrong,” Mayor Hoffman echoed.

Hoffman then read a prepared statement about his intention to appoint a task force.

“Human equity and diversity can no longer be a mere suggestion or ideology,” he said.”It is an expectation of mine to address this and the Human Equity and Diversity Task Force will begin the process to identify opportunities for improvement within our community.”