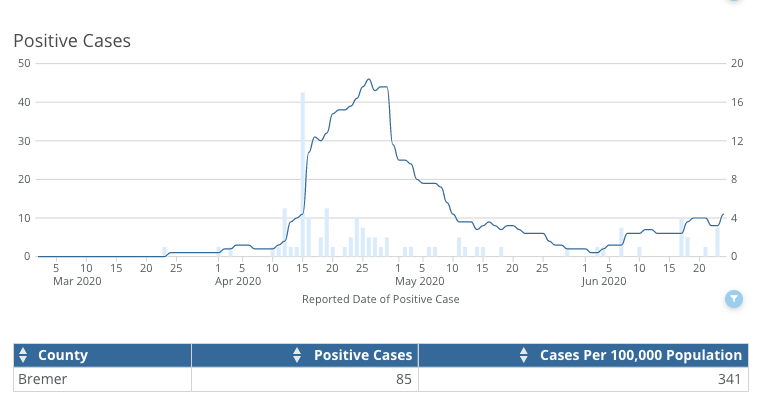 This graph shows the epidemiological curve of Bremer County. After a peak in late April, there has been a slight but steady uptick throughout June.

After about a month of declining numbers of infections, Bremer County recently saw a slight uptick in positive cases in June, including 11 over the last week.

According to the Iowa Department of Public Health’s coronavirus tracking website, there have been 15 new cases in the county so far this month. Only six were recorded throughout May, with the bulk of the cases recorded in April.

There are currently 85 total positive tests as of Wednesday, according to the website. The largest increase since late April was four on June 17, with three each on Tuesday and June 7. There have been six deaths due to the virus, while 69 have recovered, leaving 10 active cases.

“The Bremer County Health Department did investigate seven new confirmed cases last week, which was an increase compared to what we had been seeing over the past month,” said Bremer County Health Department Administrator Lindley Sharp in an email to Waverly Newspapers. The statement did not account for the three from Tuesday and a single case reported from Sunday by the state.

She reported that eight of the 11 cases were two adults aged 18-40, three middle-age adults between 41-60 and three older adults between 61-80. Sharp said the other three cases are being followed up.

A few weeks ago, Bartels Lutheran Retirement Community was removed from the list of long-term care facilities experiencing an outbreak. Statewide, that number now stands at 30 facilities.

Meanwhile, some neighboring counties have seen a bit of a flatter epidemiological curve in recent weeks. Black Hawk County, especially, after a huge surge from an outbreak at Tyson Meats in Waterloo, has seen 137 new cases in June. As of this writing, there are 1,917 cases according to the state, though the county reports 2,152, according to the county’s public health department.

Meanwhile, health authorities are reporting spikes in infections among young people in Johnson and Story counties, especially in Iowa City and Ames, home to the University of Iowa and Iowa State University, respectively. Story County officials are asking the ISU athletic department not to allow fans into Jack Trice Stadium for Cyclone football games this fall. Meanwhile, the Iowa athletic department has suspended ticket sales for Hawkeye football.

Also, media reports state there are 26 states that are seeing sharp increases in the virus, mostly in the south and southwest including Florida, Texas and Arizona.

“It remains clear that COVID is still circulating throughout Bremer County and Iowa and that everyone needs to continue to make health and safety practices a priority: clean hands often; avoid touching your eyes, nose, and mouth; avoid close contact with others; keep 6 feet physical distance from others; wear a cloth face covering in public; cover coughs and sneezes; and stay home when sick,” Sharp added.