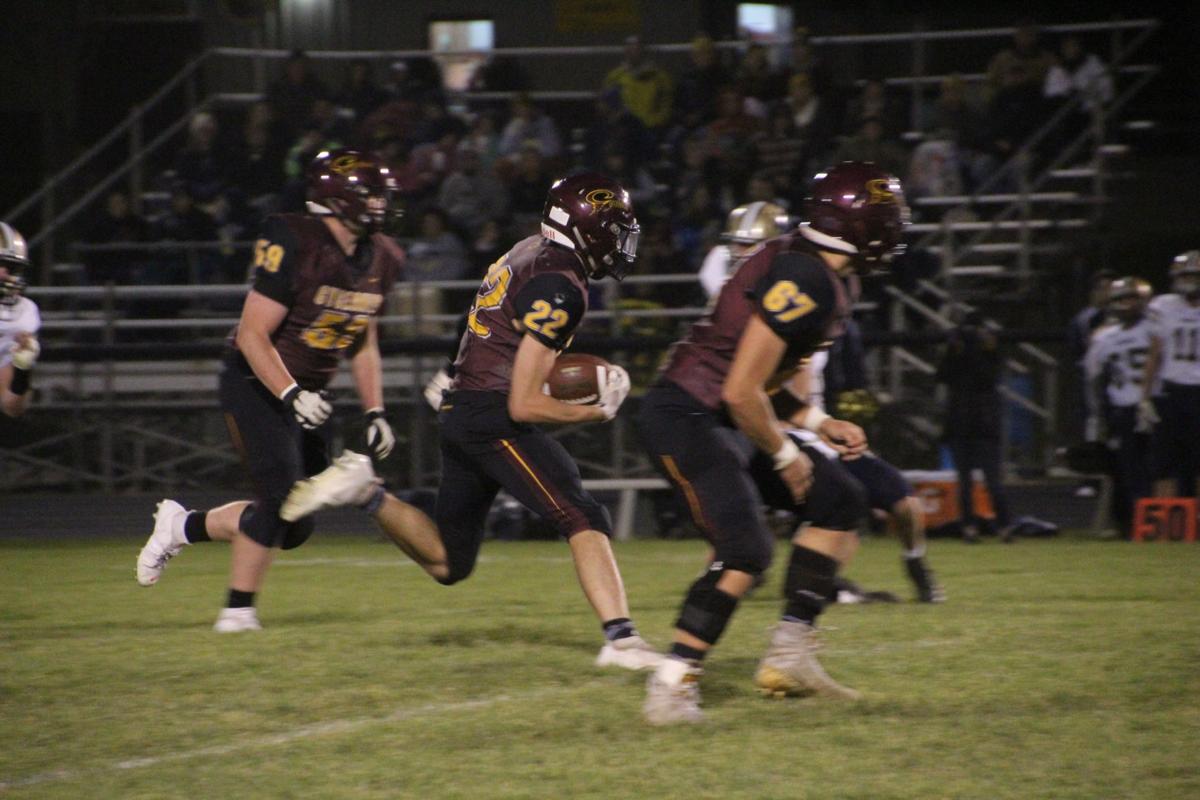 Denver sophomore running back Ethan Schoville (22) had a cutback run for a 42-yard touchdown near halftime in Denver's 53-7 victory over Sumner-Fredericksburg in a Class 1A first-round playoff game Friday, Oct. 16, 2020 at Sharp Field. Schoville also had an 86-yard kickoff return and a 48-yard reception for scores. 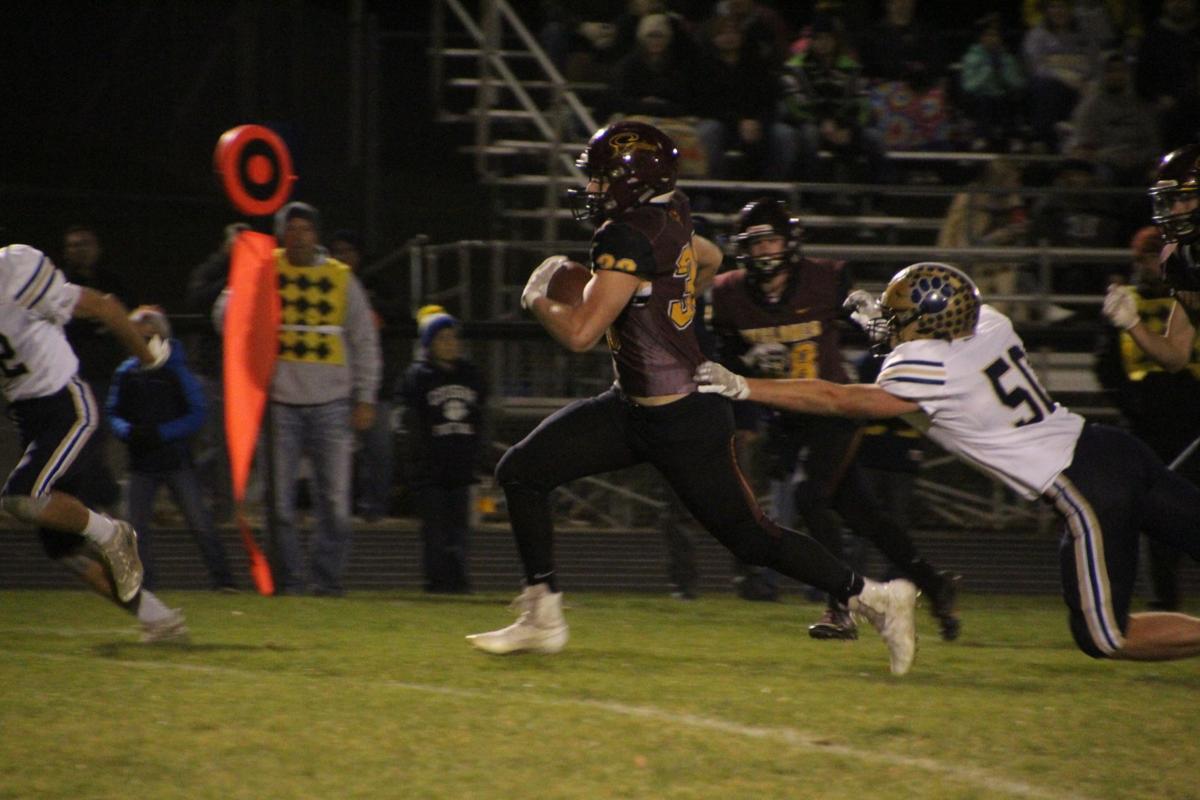 Denver’s Braydon Powers (33) pulls away from Sumner-Fredericksburg’s Nathan Zupke (50) for a 72-yard touchdown pass in the second quarter of the Cyclones’ 53-7 victory over the Cougars in a Class 1A first-round playoff game Friday at Sharp Field. 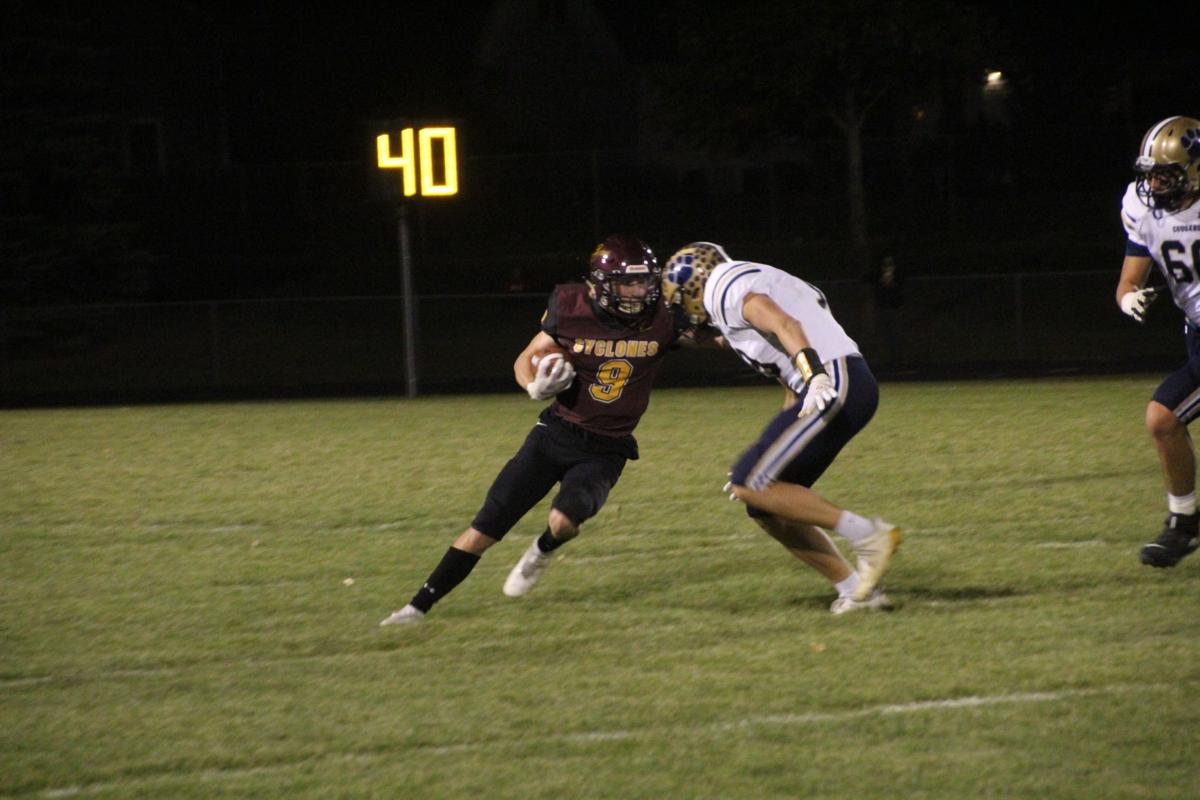 Denver's Tye Bradley (9) uses a stiff-arm to ward off Sumner-Fred's Kody VanEnglenberg (19) during a run in a Class 1A first-round playoff game Friday, Oct. 16, 2020 at Sharp Field. 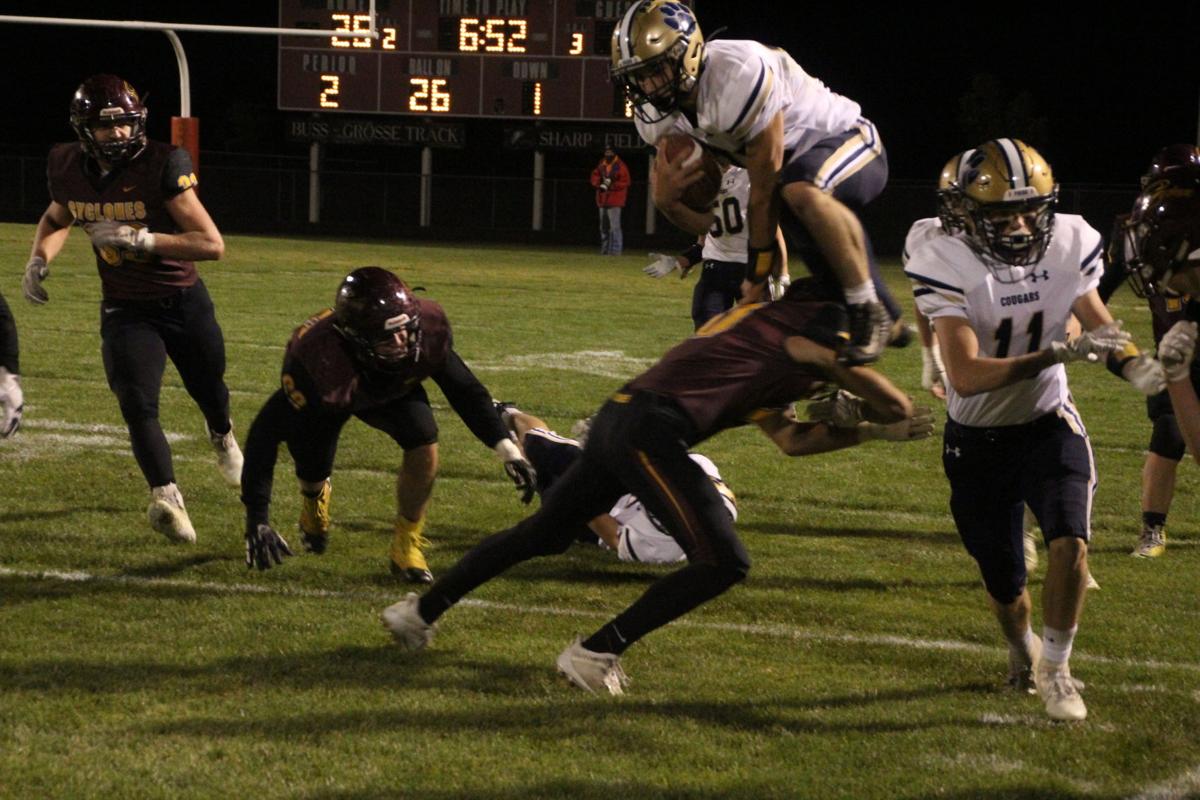 Sumner-Fred's Owen Kime (32) tries to hurdle Denver's Trevan Reiter (11, red) during a play that was called back due to penalties in a Class 1A first-round playoff game Friday, Oct. 16, 2020 at Sharp Field.

Denver sophomore running back Ethan Schoville (22) had a cutback run for a 42-yard touchdown near halftime in Denver's 53-7 victory over Sumner-Fredericksburg in a Class 1A first-round playoff game Friday, Oct. 16, 2020 at Sharp Field. Schoville also had an 86-yard kickoff return and a 48-yard reception for scores.

Denver’s Braydon Powers (33) pulls away from Sumner-Fredericksburg’s Nathan Zupke (50) for a 72-yard touchdown pass in the second quarter of the Cyclones’ 53-7 victory over the Cougars in a Class 1A first-round playoff game Friday at Sharp Field.

Denver's Tye Bradley (9) uses a stiff-arm to ward off Sumner-Fred's Kody VanEnglenberg (19) during a run in a Class 1A first-round playoff game Friday, Oct. 16, 2020 at Sharp Field.

Sumner-Fred's Owen Kime (32) tries to hurdle Denver's Trevan Reiter (11, red) during a play that was called back due to penalties in a Class 1A first-round playoff game Friday, Oct. 16, 2020 at Sharp Field.

DENVER – What did you do to mark your 16th birthday? Did you have a big party or go to the DOT office to complete your rite of passage of getting your driver’s license?

Denver sophomore Ethan Schoville marked his milestone year Friday night at Sharp Field with a big performance in the first round of the Class 1A football playoffs.

Schoville had an 86-yard kickoff return to start the contest against Sumner-Fredericksburg for a touchdown, closed the opening half with a 42-yard scoring run, and added a catch on a screen pass that he took to the house from 48 yards in the third quarter to help the Cyclones take a 53-7 victory over the Cougars. Isaac Besh also found Caylor Hoffer for two scores and Braydon Powers for another, and Hoffer and Tye Bradley each found paydirt rushing to round out the scoring.

However, Schoville wasn’t completely satisfied with his performance after the win. He knows the Cyclones will need to be better in the second round, when they head to Cascade, who defeated Wilton, 55-0, in the other game in Pod 9.

“We’ve still got some things to work on,” Schoville said. “But it was a good team win tonight. It was pretty sweet.”

He added there was only one thing that would have made the game better in his mind.

“If we could have kept that 7 off the board,” he said, “but some things happen.”

“We had some things put together I thought we would be able to accomplish on the field, and we just couldn’t limit the big play,” Coyle said. “Credit to Denver, they just do a phenomenal job of being prepared and being ready to go.

“The last time we played them (Sept. 11 in Sumner, a 27-0 loss), we just could not secure the ball on special teams, on offense or on defense. We couldn’t piece it back together. The rain just kept pouring, I guess.”

Denver’s (5-3) dominance began right after Kody VanEnglenburg put his toe to the football to get the game underway. After a few bounces, Schoville picked up the ball on the Cyclone 14-yard line and outran the entire Cougar (3-5) coverage team for the first six points of the game. After Sumner-Fred was offside on the PAT, an errant snap prevented the Cyclones from scoring two points for the 6-0 score with just 13 seconds into the game.

Schoville said kick returns have been a point of emphasis during the week’s practices.

“We’re one guy away, and the whole of my blockers, they did a good job on that,” he said.

“We really practiced it,” Barrett said. “We set it right up the middle, and that’s where we wanted it, so we worked it all week.”

After a three-and-out by the visitors, VanEnglenburg shanked a punt that went out of bounds 4 yards shy of midfield. Denver only needed four plays to cover the 46 yards to increase the lead. After Isaac Larson rumbled 32 yards to the Cougar 1, Hoffer finished the drive on a sweep with 8:35 to go in the opening quarter for the 13-0 margin.

On Sumner-Fred’s next possession, Peyton Schmitz’s pass intended for Jaymison Howard was picked off by Trevan Reiter. On the very next play, Besh connected with Hoffer for a 56-yard pass play with 7:40 left in the first stanza to make the score 20-0.

The Cougars gave up the ball again on a fumble on the second play of the ensuing possession on their own 36. The Cyclones needed just one play again, as Besh and Hoffer came together again for a score with 7:03 before the change of ends with a 26-0 score.

Sumner-Fred had their first break after punting the ball away. Schmitz was able to undercut the route on Denver’s first play of their next drive, intercepting Besh’s pass intended for Hoffer on the Cougar 43-yard line.

Barrett said the sequence was planned for how Sumner-Fred played their defense.

“We said if they (S-F) were going to go one-on-one, we’re going to do it,” Barrett said. “If (Besh) hadn’t underthrown the next one, it would’ve been another touchdown on that pick, where (Schmitz) got it. We just kind of went away from it and did some other things. That’s what we want from Caylor outside.”

Schmitz then was able to orchestrate a drive to the Cyclone 25, but Owen Kime was dropped for a 3-yard loss to turn it over on downs. Three plays later, Besh found Braydon Powers on a swing pass that resulted in a 72-yard touchdown play with 3:49 left in the half to make the score 33-0.

After another S-F punt, Schoville took an option pitch from Besh and cut back against the grain. After getting several key blocks, he was able to scamper into the end zone for the second time of the night from 42 yards with 1:54 before intermission for the 40-0 margin.

“I saw a big cut-back lane,” Schoville recalled. “Everybody was blocking, and Caylor made a big block on me on the back side, and I just got into the end zone.”

The third quarter was back-and-forth as the running clock was in effect, but Denver added to the lead toward the end of the period. The Cyclones had a five-play, 65-yard drive capped by a 48-yard screen pass from Besh to Schoville with 1:27 left. He split a pair of Cougar defenders before crossing the goal line.

“Caylor made a great block again,” the Cyclone fullback said of his backfield mate. “I just ran where I saw grass and found my way into the end zone.”

Besh showed off his acumen on defense as well. Working as a defensive back, he lunged at a Schmitz pass attempt toward Howard and picked it off at the Cougar 28 with 45 seconds left before the final frame. Bradley then ran 25 yards to the S-F 3 to end the quarter, and Besh gave the sophomore the ball again to finish off the drive with 11:51 to play to stretch the score to 53-0.

Barrett said the Cyclones flies to the ball when they have opportunities.

“We’re not the fastest, but we get where we’re supposed to be,” he said. “They do a good job.”

The Cougars were able to amass a long drive to finally dent the scoreboard. They had a possession that went 14 plays and 61 yards, covering 7:29 before Schmitz and VanEnglenburg hooked up for a 7-yard pass to cap the scoring.

Barrett said his squad wanted to keep that shutout.

“That happens,” he said, “and we’ve got to — it didn’t define us by any means, but we’ve got to keep getting better every week.”

Schoville had nine runs for 83 yards with a touchdown while grabbing two passes for 52 yards and a score to go with his opening-kick return to the house. Hoffer had four catches for 98 yards and two scores and one carry for the 1-yard score. Bradley added four totes for 23 yards and a TD, and Powers had his one scoring catch. Besh was 7-for-13 passing for 222 yards, four TDs and an interception and added had five carries for 8 yards.

Defensively, Brennen Graber led the way with 13.5 tackles, including seven solo stops, a sack and two tackles for loss. Jeremy Browning added 8.5 tackles with four by himself, 1.5 sacks and three TFLs.

Barrett said his squad made too many little mistakes, specifically some 5-yard penalties that provided speed bumps for their drives.

“I didn’t like how we didn’t finish when we were up 26-nothing,” he said. “We’ve got to keep going on that. We kind of stalemated a little bit, but sometimes, that’s just a head thing, because we haven’t been in a lot of those scenarios all year, either.

“Our kids are getting it. We’re growing every week.”

For Sumner-Fred, Schmitz was 3-for-9 passing for 24 yards with three interceptions and a touchdown, and also ran 18 times for 32 yards. VanEnglenburg had two catches for 20 yards with a score, while Beau Nederhoff had a 4-yard grab. Nathan Zupke led the rushing attack with 58 yards on 10 carries, while Owen Kime had 14 totes for 43 yards, and Kade Mitchell had eight rushes for 18 yards.

Kime also led the defense with 4.5 tackles, three solos, and one for loss. Schmitz and Klay Seehase each had 3.5 tackles, while Bennett Christensen had 2.5 stops, all for loss.

The Cyclones will have to do much studying of Cascade prior to their second-round matchup.

Barrett also didn’t know much about the next team with the moniker Cougars.

“I know they’ve got some young kids like we do, and they play hard, and they were (in a) three-way tie in their district with West Branch and (Dyersville) Beckman,” he said. “Once we get film, I’ll be watching it.”

Considerable cloudiness. Much colder. High near 40F. Winds NNW at 15 to 25 mph.