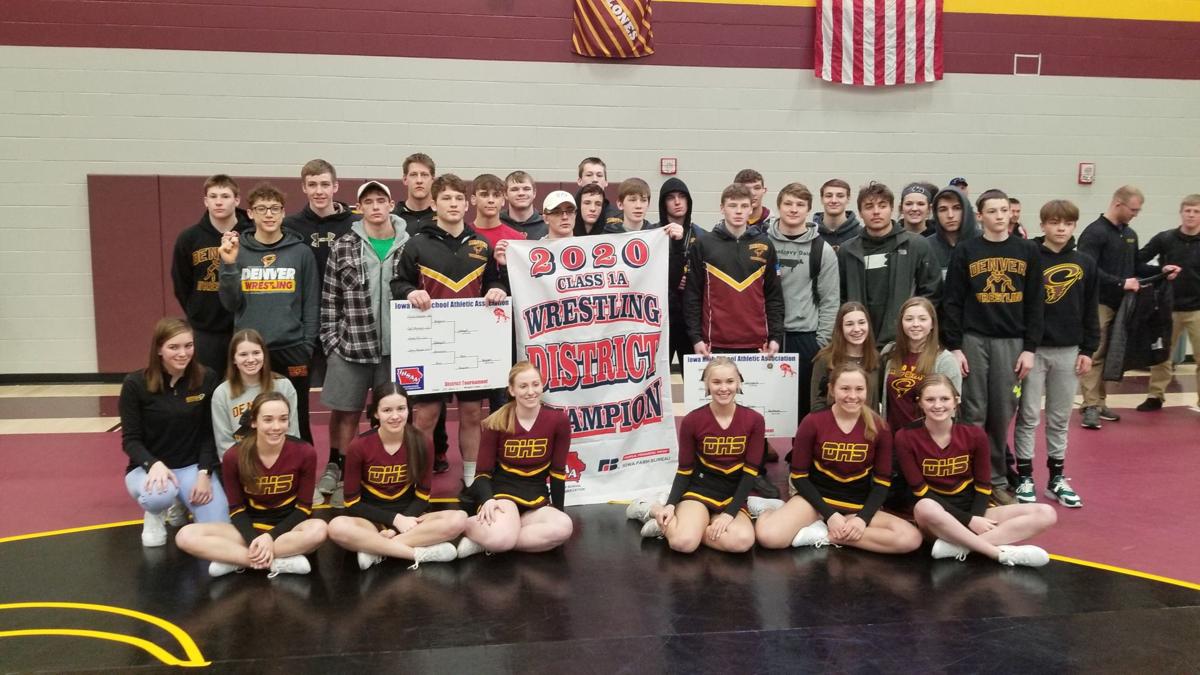 Above: The Denver wrestling team won the Class 1A District 1 championship and will have four wrestlers qualify for the traditional state tournament. 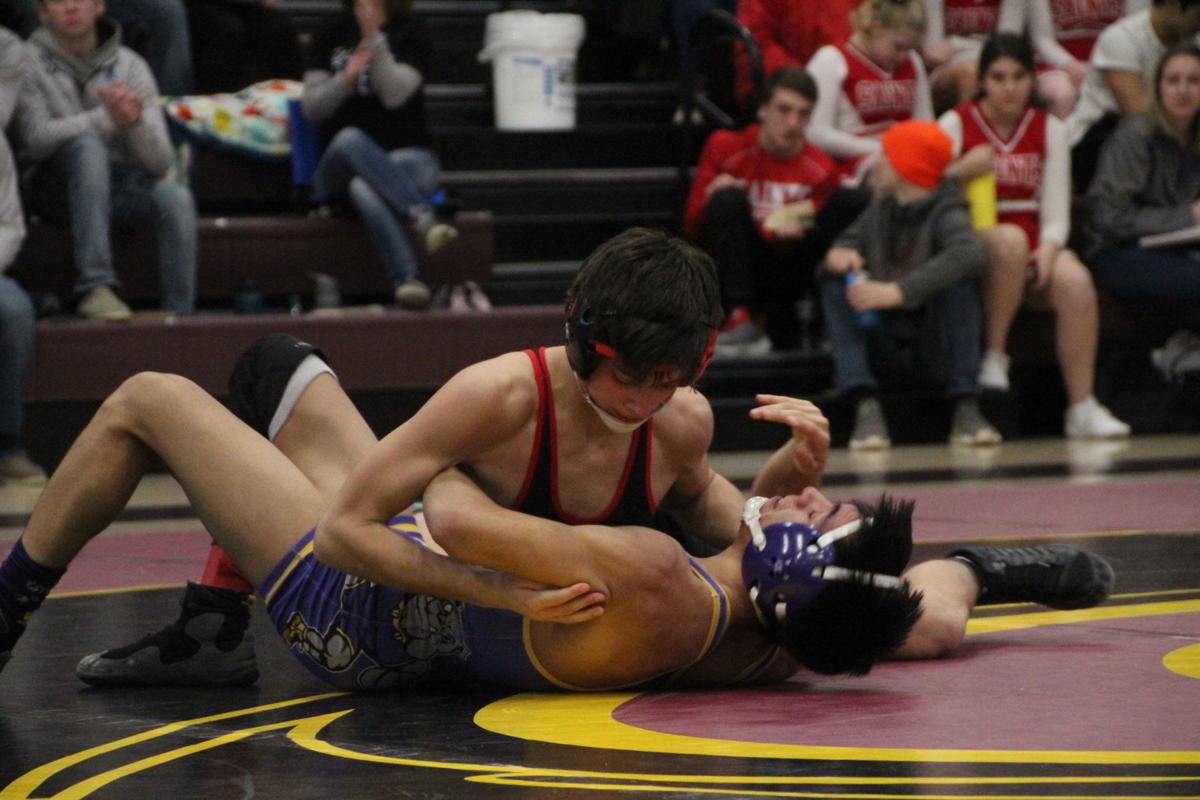 Right: Nashua-Plainfield’s Trey Nelson exposes Lake Mills’ Jimmy Gallardo’s back to the mat for near-fall points during Nelson’s 9-3 semifinal decision win in the Class 1A District 1 wrestling tournament in Denver. Nelson won the 126-pound championship and qualified for state. 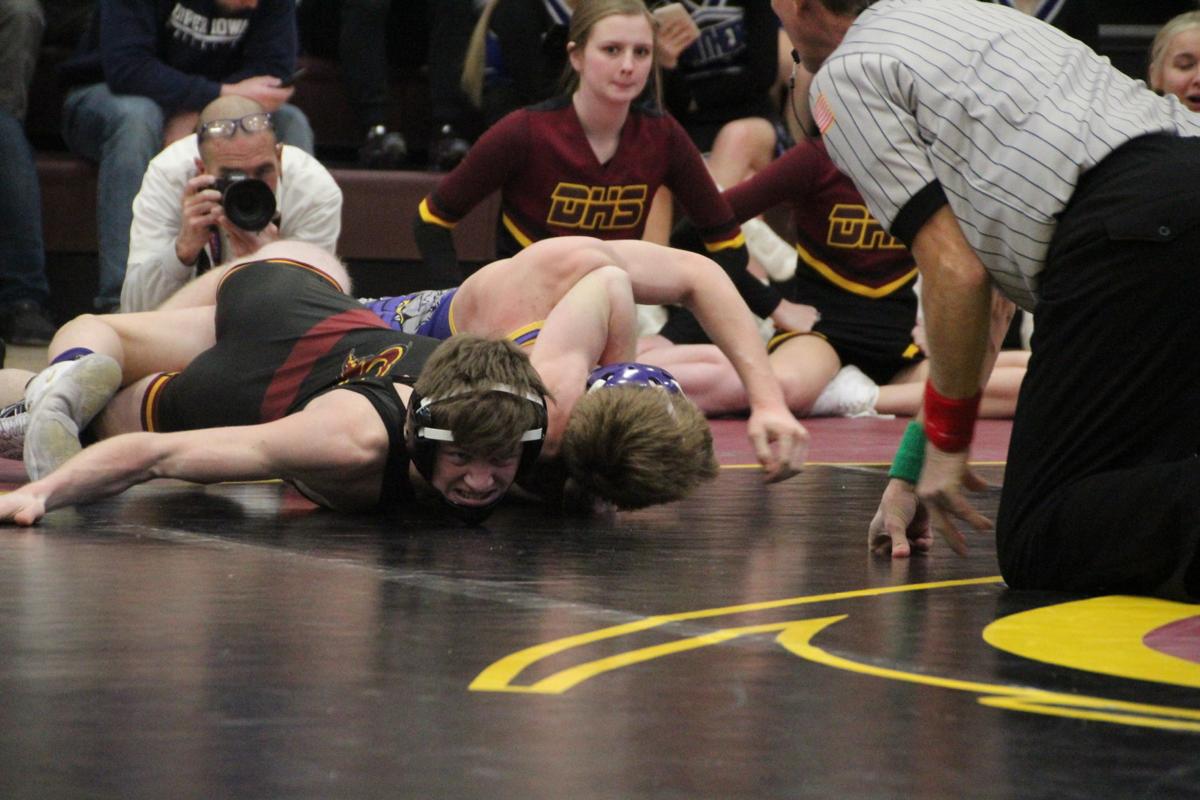 Denver’s Issac Schimmels turns over Lake Mills’ Alex Beaty in their 132-pound match Saturday in the Class 1A District 1 wrestling tournament. Schimmels would win the match by technical fall, 16-0, and eventually won the championship for the weight class to go to state. 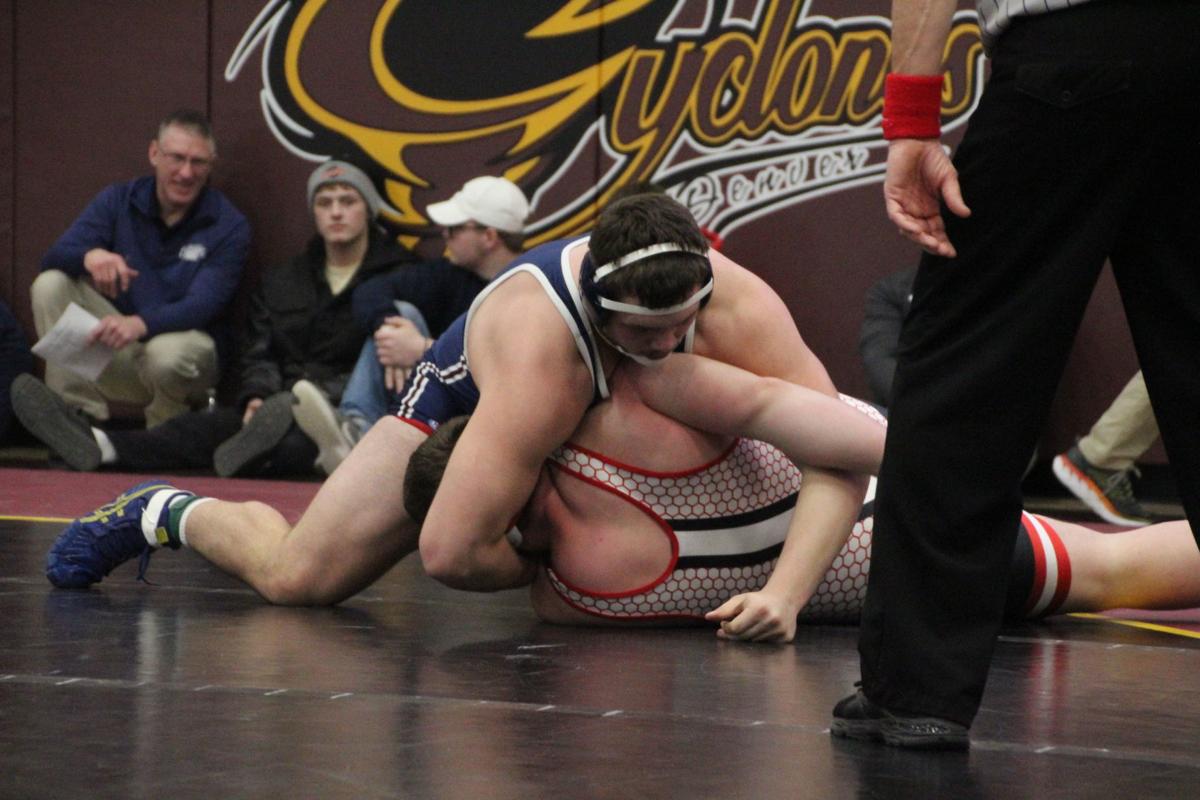 Right: Chet Buss, the North Butler-Clarksville heavyweight, tries to turn over Riceville’s Chris Eastman before pinning him in 3 minutes, 15 seconds on Saturday. Buss would later win the Class 1A District 1 championship and qualify for state.

Above: The Denver wrestling team won the Class 1A District 1 championship and will have four wrestlers qualify for the traditional state tournament.

Right: Nashua-Plainfield’s Trey Nelson exposes Lake Mills’ Jimmy Gallardo’s back to the mat for near-fall points during Nelson’s 9-3 semifinal decision win in the Class 1A District 1 wrestling tournament in Denver. Nelson won the 126-pound championship and qualified for state.

Denver’s Issac Schimmels turns over Lake Mills’ Alex Beaty in their 132-pound match Saturday in the Class 1A District 1 wrestling tournament. Schimmels would win the match by technical fall, 16-0, and eventually won the championship for the weight class to go to state.

Right: Chet Buss, the North Butler-Clarksville heavyweight, tries to turn over Riceville’s Chris Eastman before pinning him in 3 minutes, 15 seconds on Saturday. Buss would later win the Class 1A District 1 championship and qualify for state.

DENVER — Going into Saturday’s Class 1A District 1 wrestling tournament, sixth-ranked (IAWrestle.com) Denver was poised to have a good day despite a bit of a set-back.

On Tuesday, the Cyclones won their regional dual tournament in the same Marv and Helen Schumacher Gymnasium at Cyclone Center to qualify for Wednesday’s state duals. However, Gabe Lewis, the No. 3-ranked 138-pound senior suffered an injury that kept him out of the district meet, prematurely ending his high school career and reducing the number of qualifiers for the hosts to 10.

But as the action on the mat went along Saturday, Denver’s sheer numbers proved just enough to take the team championship. The Cyclones scored 98.5 points to outlast West Hancock of Britt by 1.5 points. However, only four of the 10 who stepped on the mat will compete individually starting on Thursday.

Earning individual championships for the Cyclones were Isaac Schimmels at 132 pounds and John Ebaugh at 160. Also qualifying by taking second were Joe Ebaugh at 113 and Jacob More at 126.

“We had three who settled it before we got to the wrestlebacks. We started it off with a bang. Joe Ebaugh goes out and beats a kid who, frankly, had his number all season. We don’t practice spladles all that often.”

Meanwhile, Nashua-Plainfield brought eight into the district meet and managed to bring five through the fire to get to state en route to a third-place finish with 88 points. The Huskies also had two district champions, with Garret Rieken winning at 106 and Trey Nelson taking 126, with Kyler Hackman (132), McKade Munn (138) and Evan Kalainoff (182) advancing as runners-up.

Huskies coach Al Frost said the events N-P had been to of late have been roller-coaster rides.

“We had some duals Tuesday night and stuff, and we took some emotional losses there,” Frost said. “Every tournament, there’s a good day and a bad day. We’ve got five state qualifiers today, and that’s a very positive thing for the Huskies.

“Obviously, we’re leaving a few fine gentlemen and good athletes at home. It just didn’t quite work out, didn’t take care of business, but it was still a day of stuff overall for the Huskies to get five down there (to Des Moines).”

Buss said winning his title was an awesome feeling and wants a chance to extend his stay in Des Moines this year.

“I lost in the first round last year,” Buss said. “I’m looking forward to showing people what I’ve got.”

Sumner-Fredericksburg had two wrestlers in Saturday’s proceedings, and both Owen Kime (145) and Treyten Steffen (195) advanced to Wells Fargo Arena as second-place winners.

At 106, Rinken opened his day with a pin against Northwood-Kensett’s Treycen Rollene, when he made the Viking count the lights in 1 minute, 35 seconds. He followed that up with another stick of WH’s Kale Petersen, dispatching the Eagle in 3:02.

Initially, it seemed that N-P’s Jakob Whitinger had the upper hand to head to state, as Joe Ebaugh had to go through the backside of the 113 bracket. Whitinger quickly took out Nathan Brumm, of St. Ansgar, in 34 seconds, but Ebaugh dropped a 4-2 decision to Central Springs’ Clayton McDonough.

In the placement round, Ebaugh gave himself a glimmer of hope for a wrestleback by eliminating Brumm in 1:19, but had to hope McDonough could come back to take the championship over Whitinger. The Huskie senior led the Panther sophomore, 5-3, late in the match.

However, McDonough earned a late reversal to force sudden victory, and then earned a takedown on Whitinger early on in the 1-minute overtime to take the 7-5 decision, forcing the wrestleback for second. In the later match, Ebaugh dominated Whitinger to grab the berth with an 11-4 decision.

Frost said the match between Whitinger and McDonough could have gone either way.

“I think we probably should have won that match,” the N-P legendary coach said. “It was a pretty emotional loss, and we just probably didn’t have enough momentum coming back into the true-wrestle-second match and get it done.”

At 120, Chase Lyons went 0-2 for the Cyclones. He gave up a technical fall to Central Springs’ Bryce McDonough in the semifinal, and then dropped a 7-2 decision to Lake Mills’ Jack Ramaker in the consolation bout.

The next two weights had eventual sectional rematches in the championship bout involving Denver and N-P grapplers. In 126, Moore started with a 52-second throw of CS’ Brock Mathers, while Nelson took an 11-3 major decision against LM’s Jimmy Gallardo.

In the title match, Nelson took out Moore by putting his shoulders to the mat in 4:35. However, when Mathers pinned Gallardo in 53 seconds, Moore’s berth was assured.

Nelson said Moore was a tough opponent, taking an early lead in their bout.

“I just knew I had to keep the pressure on and hope he’d die out, and I can find something to catch him and pin him,” Nelson said.

A sophomore, it is Nelson’s first trip to state after losing at sectionals last year. He said the feeling of qualifying is awesome.

At 132, Schimmels dominated Lake Mills’ Alex Beaty in a 16-0 technical fall, while Hackman eked out an 8-6 decision against N-K’s Caden Schrage. In the final, the Cyclone junior earned the pin over the Husky junior in 3:50, but Schrage’s third-place victory allowed Hackman to move on to Des Moines.

Schimmels knew he had to be strong in his bout with Hackman, who he defeated a week prior, 9-0, in Nashua.

“I knew he wasn’t a bad kid,” Schimmels said. “I knew it was going to be a good match. I just had to go out there and wrestle tough and just stick to my stuff.

“I knew that he was going to be defending against my bar-arm, which is what I kind of like to do. The cradle was there, and I thought I’d try it. It was close to getting the pin, and I just had to bounce my hips and do whatever I can to do every little thing I can.”

At 138, Munn defeated the Vikings’ Drake Tiedemann, 9-2, to advance to the championship bout. There, he dropped a 4-3 decision to Lake Mills’ Dalton Thorson. The Bulldog got there by defeating NBC’s Isaac Backer with a pin right at the expiration of the first period. The Bearcat then lost to Tidemann in the third-place match in 5:46, giving Munn the state berth.

Going to 145, Kime opened his tournament with a 4-1 decision over Brett Peterson of LM, but Denver’s Brody Shover was pinned by Riceville’s Lawson Losee in 3:48. The Wildcat then took the district title with a 13-0 major over Kime, while Shover earned the wrestleback with a 4-0 decision over Peterson.

In the second-place match, Kime had to hold off a late surge by Shover, but he was able to hold on for the 7-5 win.

In the 152 class, both Denver’s Ben Foelske and N-P’s Shane Hillesheim were relegated to the rear, after they lost, respectively, to the Bulldogs’ Casey Hanson in 5:04 and the Eagles’ Bryer Subject, 3-1. In the third-place match, Foelske earned a 6-4 victory over Hillesheim, and got the wrestleback when Hason beat Subject in 1:16. However, Subject took a 5-1 decision for second.

At 160, John Ebaugh grabbed a 21-7 major decision over Riceville’s Drew Fox and followed that up with a 3-1 decision over LM’s Elijah Wagner. The Bulldog earned his spot by pinning N-P’s Cael Brunner in 1:53. Fox then took out Brunner for third in 1:59.

In 170, Miller had to work from the back of the bracket after falling to WH’s Mathew Francis in 5:17, while Denver’s Brennan Graber took a 12-6 decision against LM’s Ashten Love. However, Francis also pinned Graber in 1:29, allowing Miller to work his way to a wrestleback with a 13-5 major over Love. He then grabbed his ticket with a 6-3 decision for second.

Kalainoff started his 182 journey with a 4:15 pin of Drake Harnish, of Lake Mills, while Nate Eggena of Denver fell to the back to West Hancock’s Cole Kelly in 1:49. Kelly won the championship match, 10-3, and after Harnish dispatched Eggena in 51 seconds, Kalainoff was assured of his trip to state.

At 195, Steffen stuck Lake Mills’ Brayden Lindeman in 2:12, while Denver’s Trever Dorn got pushed to the consy by Tate Hagen of West Hancock in 5:07. Hagen then grabbed a 3-0 decision over Steffen for the title, and Dorn earned a wrestleback with a 26-second stick of Lindeman. However, Steffen was able to bounce back to take the 10-4 decision to earn the second spot.

NBC’s Jase Wiebke took third place in the 220 class. He lost to Tanner Hagen of WH in 38 seconds, but then took an 8-6 sudden-victory decision over Kole Menne, of Rockford. But because Rollene beat Hagen in the final, a wrestleback was denied.

Buss opened his 285 trek with a pin in 3:16 over Riceville’s Chris Eastman and followed that up by turning over West Hancock’s Chandler Rendinus in 5:48.

The Bearcat heavy said he was looking to score on his attacks against his Eagle competitor.

“It just so happened the pin was there,” Buss said. “I just ended up with the pin.”