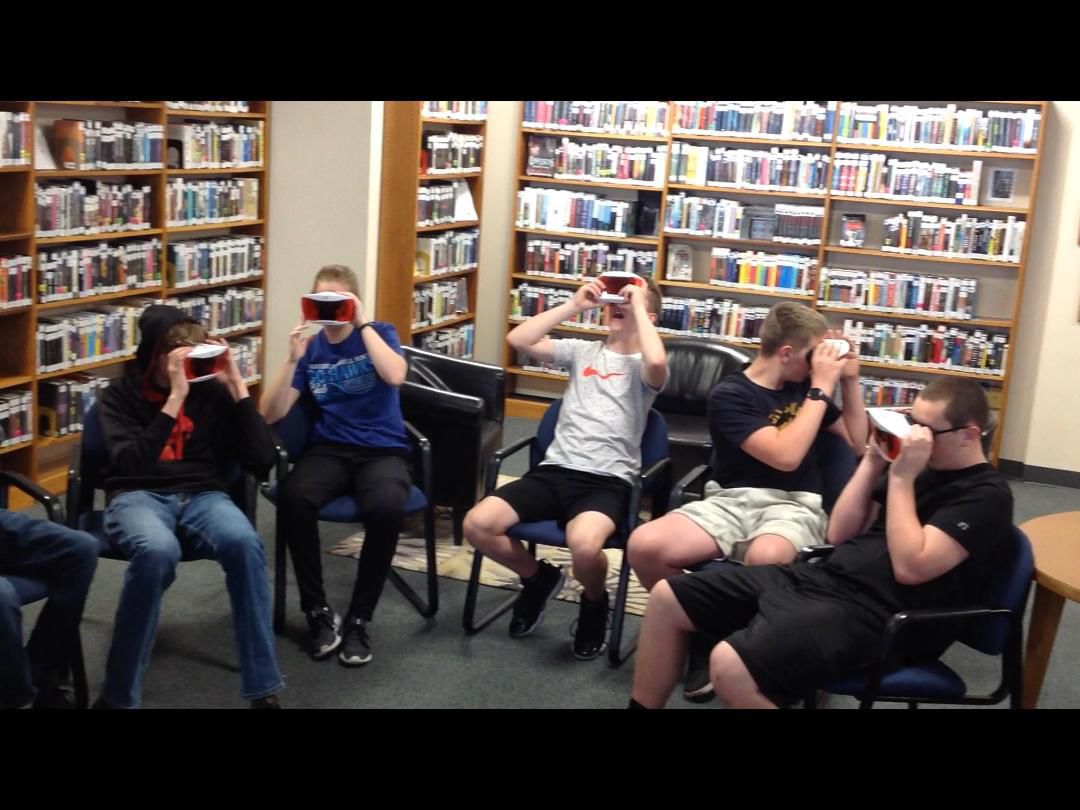 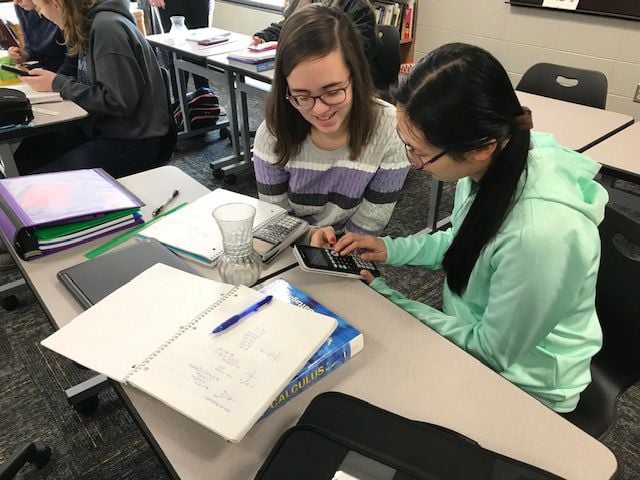 In Intro to Calculus, Sarah Olson and Jennifer Zeng work on a volume of a solid of revolution problem using a graphing calculator.

In Intro to Calculus, Sarah Olson and Jennifer Zeng work on a volume of a solid of revolution problem using a graphing calculator.

Smart Money Teacher Grants fill the gaps between educational needs and available State funds, according to W-SR Community Schools Foundation Director Amy Hunzelman. Donations made to the Foundation make a real difference in the day-to-day lives of students.

W-SR Foundation teacher grants have enhanced student experiences in math, science, and arts education programs as well as physical and music education. Twice yearly, a volunteer committee reads teacher-submitted applications and recommends awards to be approved by the W-SR Foundation Board.

Five awards totaling $2,099 were distributed in February 2019. A second set of $750 grants totaling $3,546.72 was distributed in October 2019. Awards are “based on the strength of the application, and serving K-12 students” according to Hunzelman.

The Thursday, Jan. 9 edition of the Waverly Democrat included photos of kindergarteners using flexible seating provided by Smart Money Teacher Grants. Here are a few other examples of how Foundation money has supported education an W-SR:

“Making Virtual Reality a Reality” was the title of a successful grant application made by technology instructor Jeff Orvis. “This project allowed us to get Virtual Reality (VR) goggles and devices into classrooms. The grant allowed us to purchase an additional 5 iPod Touch devices, as well as charging stations and a case. Thus far, students in grades 3, 5, 6, and 9 have used Virtual Reality to explore Germany, flight and space, Nelson Mandela, and Shakespeare.

Third graders are pen pals with students in Eisenach, Germany. Using virtual reality, W-SR students were able to “tour” Germany. “Wows” were audible as students toured a local mine and saw how fresh air was brought to miners deep underground.

“They are better able to understand Germany and their pen pals,” Orvis concluded.

Ninth graders in English classes had the ability to visit the Royal Shakespeare Company Theatre and walk Shakespeare’s local streets.

Sometimes, a change in State laws creates a special need for funds, as was the case in high school mathematics, where students use graphing calculators.

“In the past, if a student did not buy a calculator, they could rent one from the math department. Rental funds were used to replace calculators, but due to school law changes, W-SR is no longer allowed to charge rental fees. The Smart Money grant allowed for the purchase of four calculators,” explained instructor Dave Arns.

Art students in all district elementary buildings learn printing making techniques. Thanks to Smart Money Teacher Grants Instructor Amy Steuer purchased printing pads, rollers, and trays which can be reused each year with over 700 students.

“Their facial expressions say it all. They all just loved it, and it was a completely new experience for them all,” Steuer said.

Grant requests for the 2020 funding cycle are due January 31 and again in September 2020.

“Teachers pour so much heart and soul and personal finances into the classroom. It is great to be in a position to help make those connections to support education,” said

Erin Jones, a parent of four and member of the volunteer committee who reads teacher grant applications. That committee is composed of parents, alumni, and district employees.

The mission of the W-SR Foundation is to expand and enhance educational experiences and opportunities for students, staff, and residents of the Waverly-Shell Rock Community School District. Former West Cedar Principal Roger Wilcox serves on the grant committee and in his Letter to the Editor in the Jan 11 Waverly Democrat explained reasons to support the Foundation.

In 2017, under the leadership of superintendent Ed Klamfoth, the Foundation added teacher grants and an endowment to the existing work of providing scholarships. Governed by an 11-member volunteer board of directors, the Foundation operates as a separate 501©3 organization from the Waverly-Shell Rock Community School District.

Cloudy skies early, then partly cloudy this afternoon. A few flurries are possible. High 11F. Winds NNW at 5 to 10 mph.