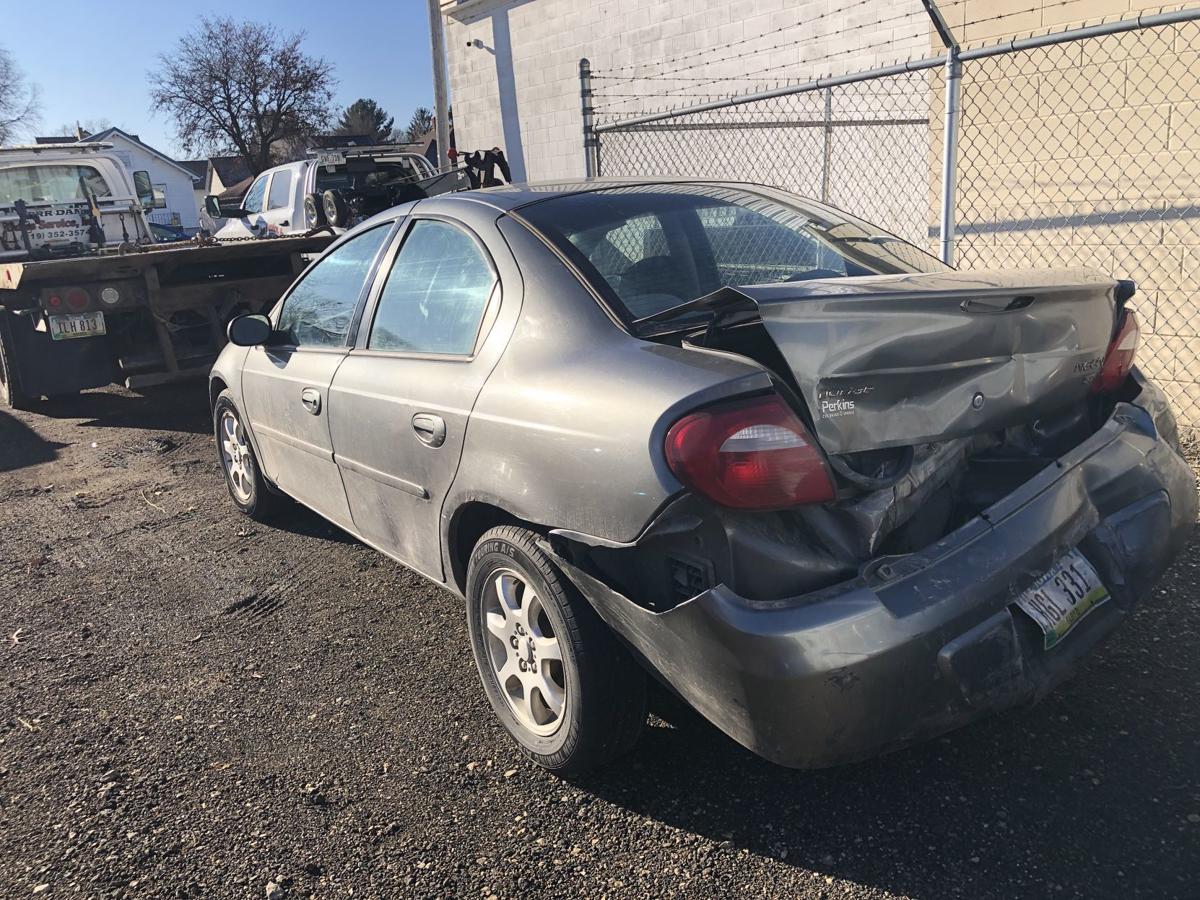 This Dodge Neon, seen in the holding yard at Dale’s Auto Service, was reportedly rear-ended while trying to avoid a broken refrigerator that fell out of a pickup at the Cedar River Bridge on U.S. Highway 218 in Janesville on Tuesday. 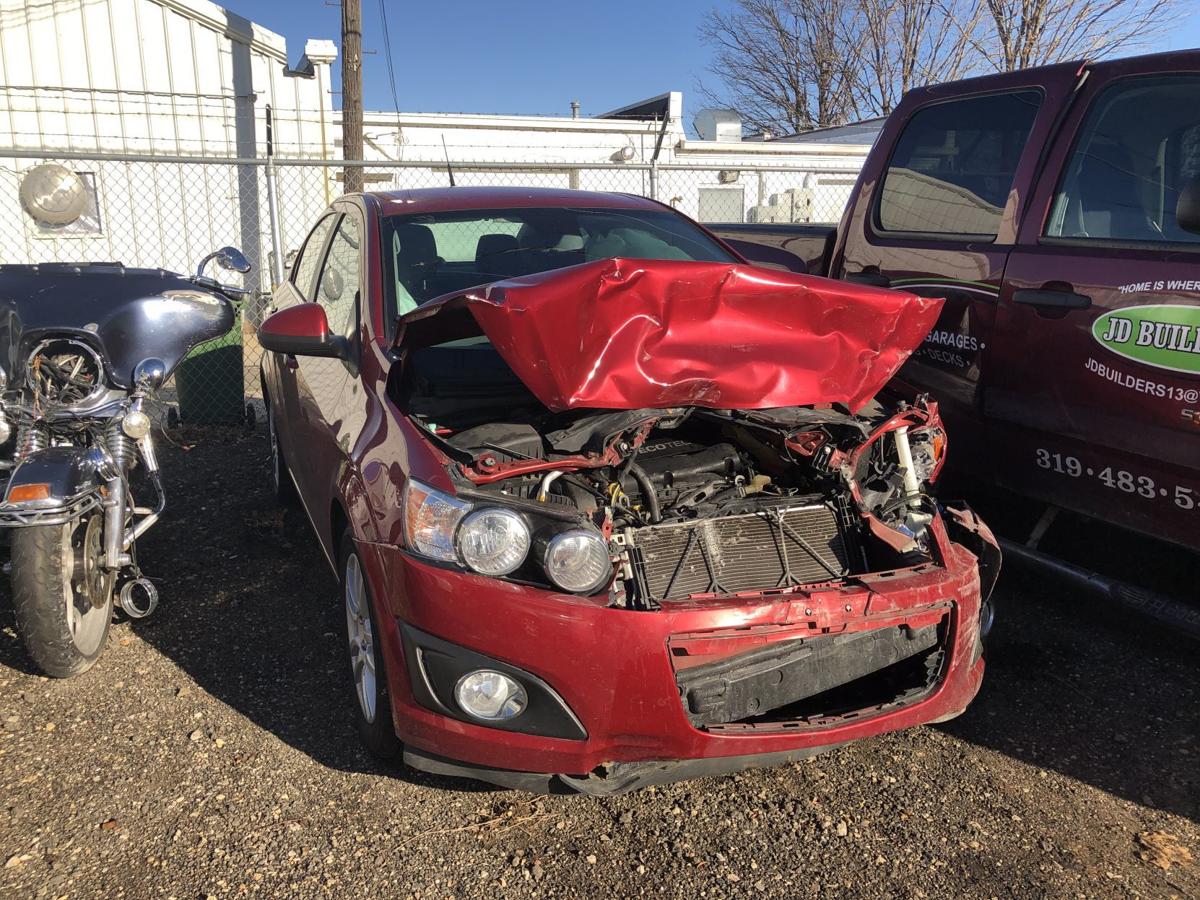 A Chevrolet Sonic, seen here in the holding yard of Dale’s Auto Service on Wednesday, was involved in an accident on U.S. Highway 218 in Janesville in the aftermath of a refrigerator falling out of a truck on the Cedar River bridge Tuesday night.

This Dodge Neon, seen in the holding yard at Dale’s Auto Service, was reportedly rear-ended while trying to avoid a broken refrigerator that fell out of a pickup at the Cedar River Bridge on U.S. Highway 218 in Janesville on Tuesday.

A Chevrolet Sonic, seen here in the holding yard of Dale’s Auto Service on Wednesday, was involved in an accident on U.S. Highway 218 in Janesville in the aftermath of a refrigerator falling out of a truck on the Cedar River bridge Tuesday night.

The transportation of Black Friday-week purchases wound up to be disastrous Tuesday night when a refrigerator fell from the back of a pickup truck and smashed on the Cedar River bridge on U.S. Highway 218 in Janesville, leading to two separate accidents.

At around 5:50 p.m., a witness called the Bremer-Waverly Law Enforcement Center to report the incident. Bremer County Sheriff Dan Pickett told Waverly Newspapers Wednesday morning the refrigerator was strapped unboxed between two other appliances in the back of a black pickup truck.

The truck was northbound on Highway 218 as it was about to cross the bridge when the appliance fell out.

“It’s unknown if maybe coming onto the bridge there … there may be an itty bitty dip there, but as (the driver) started to cross, and that’s how the refrigerator went out of the truck,” Pickett said. “It pretty much covered half to three-quarters of the bridge, pieces and parts.

“There were pieces all over. Once it fell out of the truck, I’m sure — who knows at what speed. It is 65 mph speed limit, and if you’re going 65, or there about, and it hits the road, it’s going to be a mess.”

Pickett said there was one report of a vehicle getting damage from running into the debris. There was no further information available in that accident.

The sheriff said the deputy who responded had reported that traffic was backed up around the bend toward Exit 195 that leads toward the town’s Kwik Star and Janesville Consolidated School.

According to the Iowa State Patrol, it was at that location that a 2012 Chevrolet Sonic LT, driven by Elizabeth Makayla Denniston, 23, of Waverly, rear-ended a 2006 Dodge Neon SXT, driven by Elias Mitchell Vernon King, 20, of Charles City, at around 6:16 p.m. Denniston was northbound and came upon the congested traffic, but failed to stop before she hit the Neon, causing both to be total losses.

Denniston was cited by the ISP for failure to maintain control. Pickett said he saw no citations for the refrigerator incident.

Along with Bremer County deputies, Janesville police and ISP troopers, the Janesville Fire Department and the Iowa Department of Transportation responded to the scene.

Pickett added that the driver of the truck had told law enforcement that they had purchased the appliances at a Menard’s location.

With the holiday shopping season in full force now, Pickett advised that whenever someone makes large item purchases that they are properly secured.

“Have more than one strap, strapped to something solid in the vehicle,” he said.

He recalled another incident several years ago on Iowa Highway 3 where something similar occurred on what is known as Thoms Bridge.

“They had just bought a new stove,” Pickett said. “This stove also came out of the back of the pickup. The stove … was demolished. Once it hits the road and spins around, it was all dented up.

“Usually, people strap them in, and you don’t hear of this happening often. It can happen if you don’t have it tied in right. You do see a lot of people (have these loads), because they have some tremendous sales at different places for appliances, and people are buying them. You see people at this time of the year having appliances being transported in vehicles or in pickups and in trailers.”