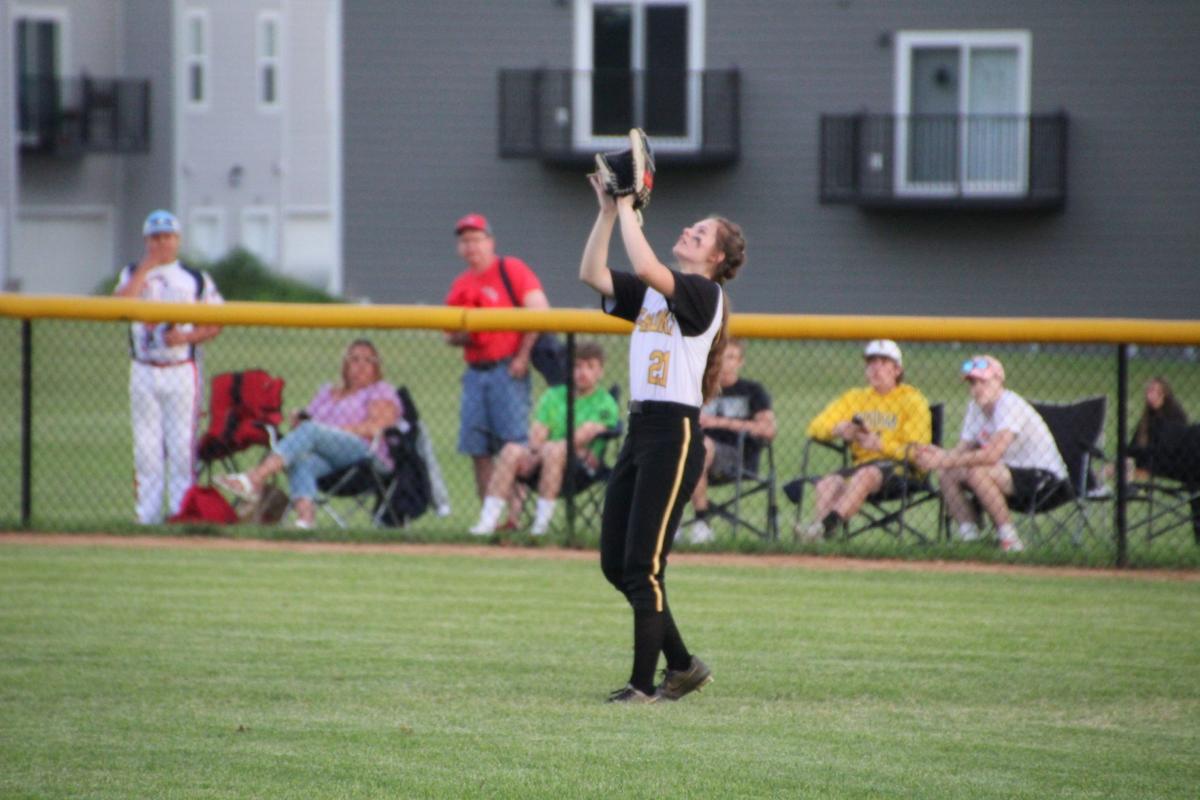 Waverly-Shell Rock center fielder Grace Mraz waits for a fly ball to settle in her glove during the Go-Hawks’ 11-0 loss to Cedar Falls on Wednesday, June 24 at W-SR High School. 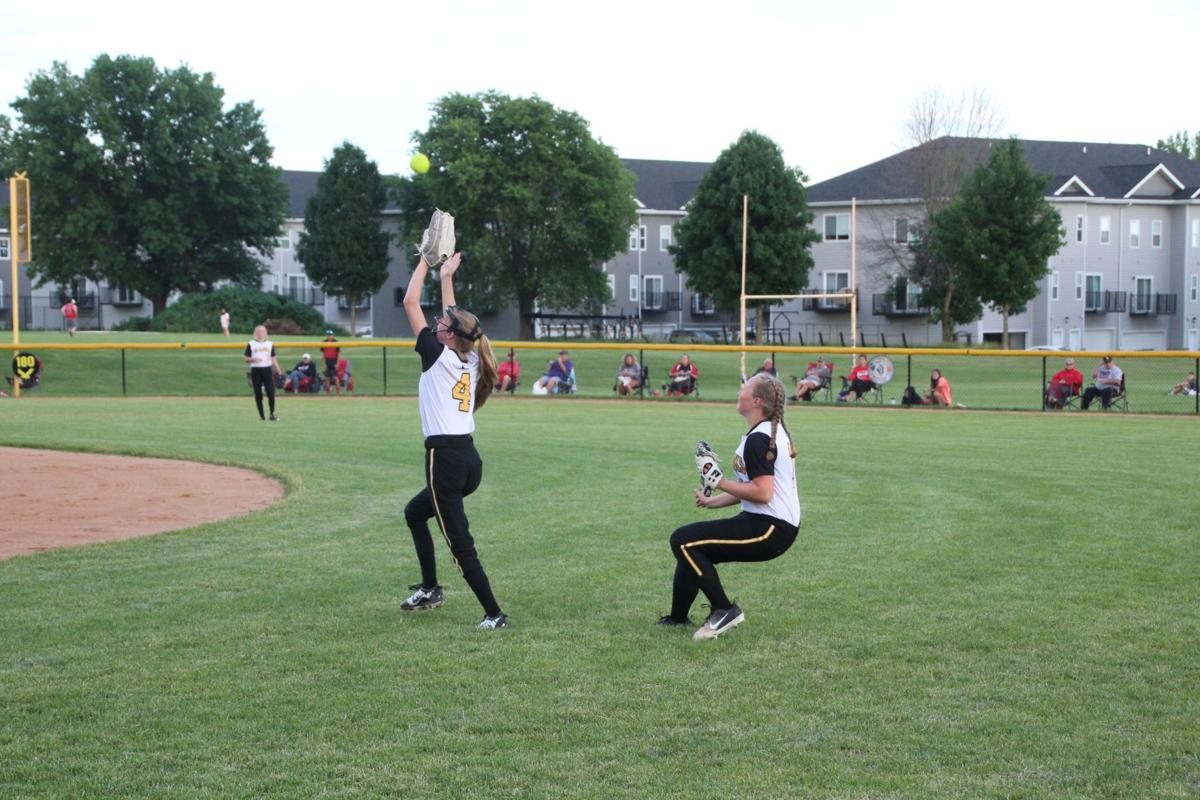 Waverly-Shell Rock second baseman Kasey Fox (4) prepares to catch a pop fly while backed up by right fielder Jenna Willey (14) during the Go-Hawks’ 11-0 loss to Cedar Falls on Wednesday, June 24.

Waverly-Shell Rock center fielder Grace Mraz waits for a fly ball to settle in her glove during the Go-Hawks’ 11-0 loss to Cedar Falls on Wednesday, June 24 at W-SR High School.

Waverly-Shell Rock second baseman Kasey Fox (4) prepares to catch a pop fly while backed up by right fielder Jenna Willey (14) during the Go-Hawks’ 11-0 loss to Cedar Falls on Wednesday, June 24.

The Waverly-Shell Rock softball team had an up-and-down week while losing a pair of games against nearby rivals.

On Tuesday, the Go-Hawks were able to bang out six hits against then-Class 4A No. 9 Charles City but dropped a 10-5 decision at Charles City High School in a game that was postponed from the night before. They then struggled to get just two hits against Class 5A foe Cedar Falls in an 11-0 defeat Wednesday at home.

Going into Wednesday’s contest, Go-Hawk head coach Heather Zajicek felt good about her team’s chances against the Tigers after the good showing against the Comets.

“We played a very competitive game (Tuesday) up at Charles City,” Zajicek said. “We just let too many things get to us, and then we just couldn’t bounce back from things.”

C.F. pitcher Cyrah Rasmussen stymied the W-SR hitters throughout the contest. The sophomore Tiger hurler fanned 14 Go-Hawks in the game while not allowing a single base on balls in the complete-game win. There was one other baserunner allowed off an error on a sacrifice bunt.

“(Rasmussen did a great job,” Zajicek said. “She was hitting corners, keeping us off balance. She moves the ball up and down, in and out, and we didn’t do a good enough job of adjusting to her, but we’re certainly going to take what we saw tonight, what we learned to move us toward future games.”

The Tigers (1-4 overall, 0-2 Mississippi Valley Conference, Mississippi Division after Wednesday) took a quick 2-0 lead on the Go-Hawks (1-4, 1-3 Northeast Iowa Conference) after just two batters. Gabby Townsend led off with a double that went over the glove of W-SR left fielder Jorie Lee, and then Maddie McFarland crushed a 3-1 offering from Go-Hawk starter Marley Hagarty over the right-field fence about 195 feet for a home run.

Hagarty then walked the next two before settling down. She struck out Tjaden Petersen, then first baseman Haley Eckerman cut down Rasmussen at the plate on a bunt attempt by Lex Hesse, and Hagarty got out of the inning with by issuing a K to Avery Canfield.

The two starters then went pitch-for-pitch over the next four half-innings before the Go-Hawks had their only rally of the game. Jenna Willey led off the bottom of the third with a bloop single to right, and then Alandria Trowbridge reached on a sacrifice bunt when Tiger first baseman Myah Brinker threw the ball away. However, Lee struck out, Eckerman popped into an infield fly to Rasmussen, and Hagarty was retired looking to squander the chance.

“We made some adjustments up at the plate,” Zajicek said. “We wanted to continue to do what we were doing and make adjustments. Unfortunately, we were unable to push across any runs.”

C.F. then scored a run in the fifth, on a triple by Rasmussen, who later scored on a groundout, followed by four in the sixth and seventh.

Hagarty struggled in the circle for the Go-Hawks. She allowed four hits, seven earned runs and 11 walks but struck out eight in 5 2/3 innings in the loss.

“She just needs to continue to work on hitting her spots and limiting her walks and getting first-pitch strikes,” Zajicek said. “Our philosophy isn’t changing, to get ahead in the count. It’s what we talk about all year, and we just need to get better at that.”

Haley Randolph came in for relief. She gave up five hits, four earned runs and one home run in 1 1/3 innings without a walk. She had one strikeout.

Zajicek said that the Go-Hawks needed a change of pace inside the circle.

“Haley did what we asked of her,” Zajicek said. “They put the ball in play, we made some outs. It’s all we can ask of her.”

Zajicek said that Tuesday’s game at Charles City was “back-and-forth,” although the Comets were able to prevail, 10-5. The Go-Hawks took a 4-0 lead in the top of the third before the Comets tied it with four in the bottom half and then took a 6-4 lead in the fourth with a pair of runs in that inning. W-SR pulled to within one with a single run in the top of the sixth, but Charles City extended the lead in the bottom of the frame with four additional runs.

Eckerman led at the plate with a 2-for-4 night, while Lindsey Miller, Kasey Fox and Grace Mraz each had an RBI. Hagarty allowed 10 earned runs on 12 hits with eight walks, a hit batter and six strikeouts on the night.

Zajicek said that the Comets have a lot of “slappers,” which in softball are hitters who run within the box while swinging the bat.

“They put a lot of pressure on us defensively,” she said. “We did a great job of answering back and put pressure on them and force them to commit some errors.

“Overall, we’re satisfied with how competitive through seven innings of ball, we certainly had more opportunities up there to push runs across.”

The Go-Hawks were to have hosted Waukon Friday night, but the game was postponed to a later date due to a threat of severe thunderstorms. They also were scheduled to plat at Oelwein on Monday. This week, they’ll go to New Hampton on Tuesday before hosting Decorah on Wednesday, and finally go to Class 3A No. 12 Crestwood on Friday.