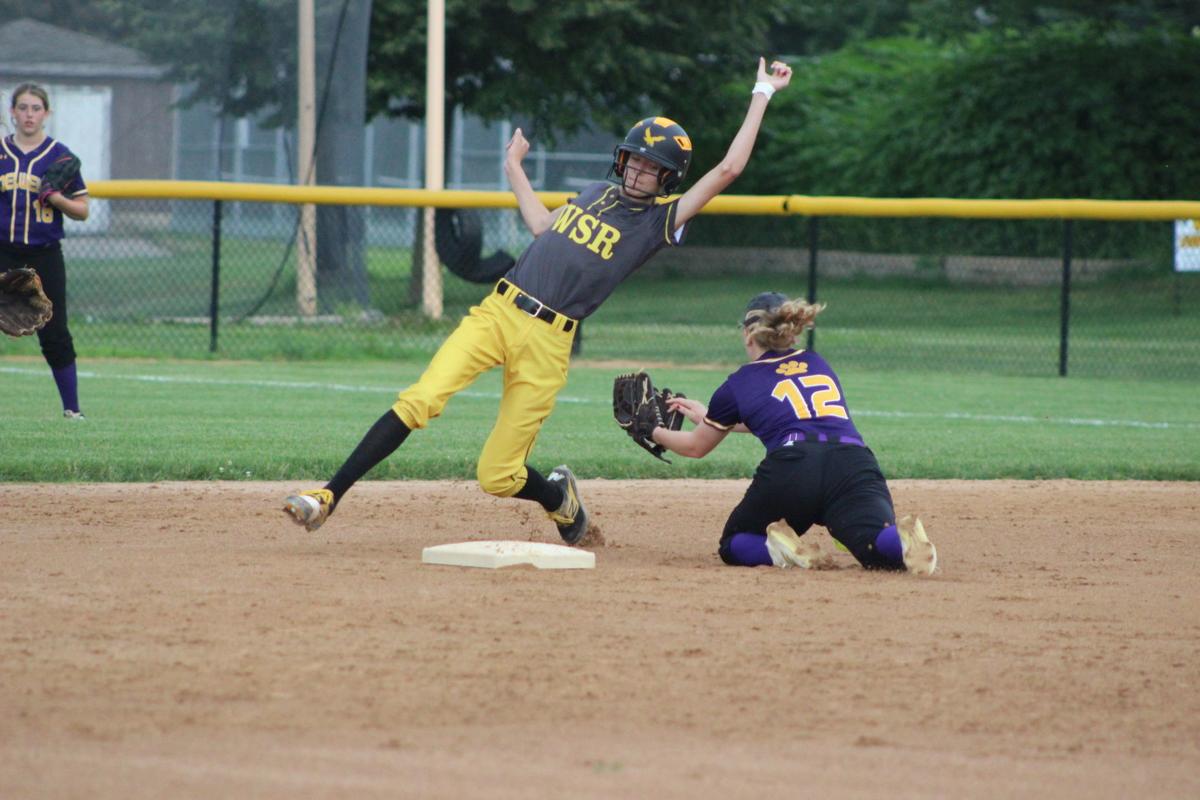 Waverly-Shell Rock’s Avery Beckett avoids the tag by Oelwein’s Emma Hefel during the first game of the doubleheader on Wednesday, July 3 in Waverly. In both games, Beckett went a combined 5-6 and recorded four RBIs. 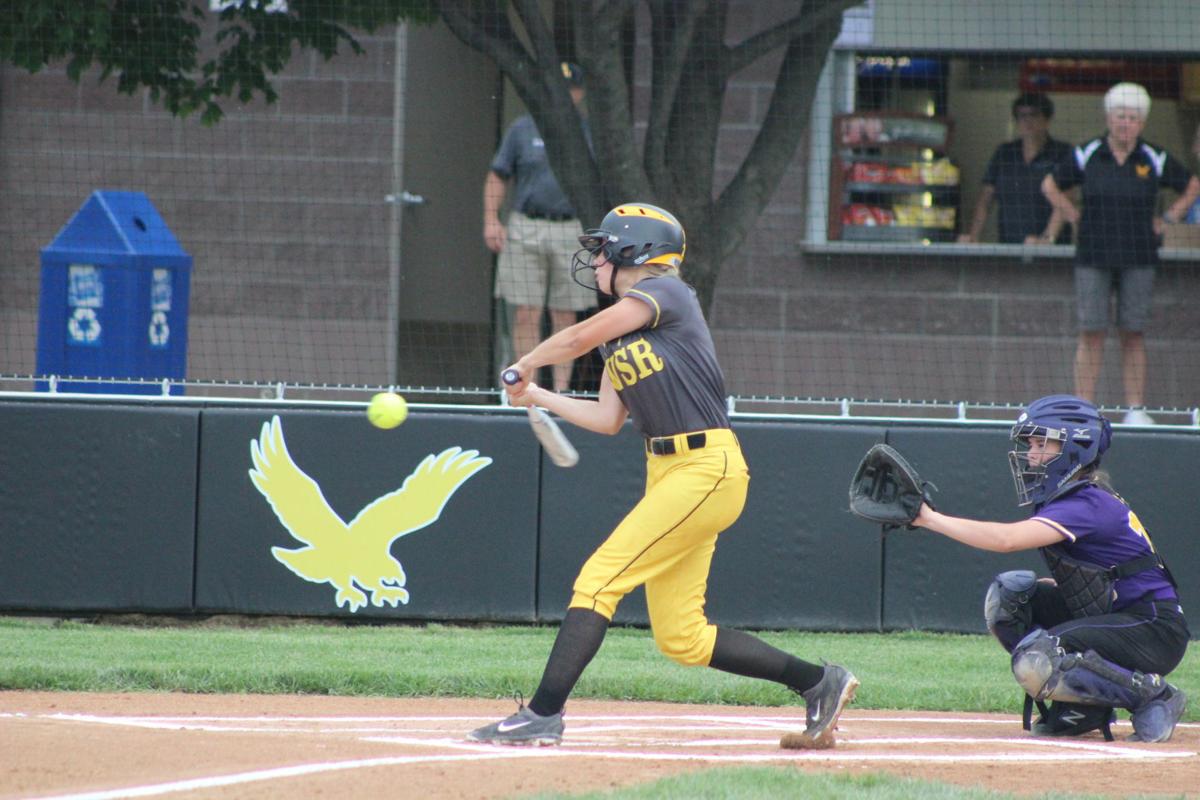 The Go-Hawks’ Avery Meier makes contact at the plate against Oelwein on Wednesday, July 3. Meier tallied three hits and three RBIs in the Go-Hawks’ 9-3, 12-0 sweep over the Huskies.

Waverly-Shell Rock’s Avery Beckett avoids the tag by Oelwein’s Emma Hefel during the first game of the doubleheader on Wednesday, July 3 in Waverly. In both games, Beckett went a combined 5-6 and recorded four RBIs.

The Go-Hawks’ Avery Meier makes contact at the plate against Oelwein on Wednesday, July 3. Meier tallied three hits and three RBIs in the Go-Hawks’ 9-3, 12-0 sweep over the Huskies.

Heather Zajicek has said it all season.

The Waverly-Shell Rock head softball coach has encouraged her team to “play for July.”

So, when the calendar flipped to the last month of the season, it seemed the Go-Hawks were ready, as they hosted Oelwein on Wednesday, July 3 for a doubleheader. The opening game of the twinbill was the continuation of the June 11 game that was suspended and the second game was originally scheduled to be played at Oelwein.

The Go-Hawks came out and took both games against the Huskies, 9-3 and 12-0 in four innings.

Zajicek said the Go-Hawks’ wins started with their approach at the plate.

“You always wonder when you pick up a game from June 11 how the kids are going to come out,” Zajicek said. “We were already down 3-1, but it didn’t seem to phase them. Tonight [July 3], we were hitting balls just as hard, but we were finding holes. That’s what’s crazy about this game. You can keep the same approach at the plate and just continue to put balls in play and hopefully good things will happen on the offensive side.”

Waverly-Shell Rock started the opening game down 3-1 in the bottom of the second. Avery Meier got on base with a double, advanced to third on Jorie Lee’s sacrifice bunt and scored on Molly McNally’s two-base hit. At the end of two, it was Oelwein 3, Waverly-Shell Rock 2.

Both teams were scoreless through the third and fourth innings, as it wasn’t until the bottom of the fifth when the Go-Hawks got their first lead of the game. Avery Beckett hit a single and scored on Jacey Meier’s double. Meier made it to third on Lindsey Miller’s double and scored on a wild pitch. Miller’s courtesy runner, Zoe Blanchette, made it to third on the wild pitch and was brought in with Lee’s single. Avery Meier drew a walk, stole second and later scored on McNally’s second double of the night. Lee was able to get to third on McNally’s double and also scored on a wild pitch, while McNally scored on a Husky fielding error. After five complete, the Go-Hawks led the Huskies, 8-3.

The Go-Hawks added on more run in the bottom of the sixth, as Alandria Trowbridge reached base on an Oelwein fielding error. Trowbridge made it to second on a wild pitch and later scored, after singles from Miller and Avery Meier.

By keeping Oelwein scoreless in the top of the seventh, Waverly-Shell Rock took the first game by a final 9-3 score.

Hagarty picked up the pitching in the first game and threw six innings, allowed three hits, gave up three runs, walked two and struck out eight. Beckett pitched one inning of relief, as she walked one and fanned one.

Offensively, Beckett and Avery Meier co-led the team, going 2-3 at the plate, while Hagarty and McNally each tallied two RBIs.

In the second game, the Go-Hawks played as the visitors, due to the game originally being slated as a home contest for the Huskies.

However, it appeared that Waverly-Shell Rock was still working the home field advantage, as it took them just four innings to get the 12-0 victory.

McNally led off the game by reaching base on a Husky error and made it to second on Miller’s sacrifice bunt. Beckett hit a single, which was followed by a Jacey Meier single, allowing McNally to score. Beckett scored on the following at-bat with a fielder’s choice, while Jacey Meier plated a run with the designated player Jenna Willey’s single, making it 3-0 after one, as the Huskies were scoreless in the bottom half of the inning.

During the second frame, the Go-Hawks exploded on a seven-run inning. Grace Mraz led off with a single, advanced to second on Lee’s single and both runners advanced on the fielder’s choice. It was Avery Beckett’s single that plated both Mraz and Lee, making it 5-0, Go-Hawks. Beckett made it to second on a wild pitch, while Jacey Meier drew a walk. Avery Meier’s hit scored Beckett and put Jacey Meier at third. Willey hit another single, scoring Jacey Meier and advancing Avery Meier to third base. It was Trowbridge’s single that scored Avery Meier and got Willey to third base. Batting for the second time in the inning, Mraz hit a double that scored Wiley and Trowbridge, making it 10-0 after two innings.

In the bottom of the third, the Huskies tried for a rally, as Nicole Lenz started the frame with a single and made it to second with a stolen base. Two batters later, the Huskies’ catcher Carley Jeanes was walked, leaving two Oelwein baserunners with just one out. However, a Marley Hagarty strikeout and a fly out to Go-Hawk right fielder, Mraz, would get the Go-Hawks out of the inning without damage.

Waverly-Shell Rock tacked on two more runs in the top of the fourth inning with two outs. McNally stepped up to the plate and hit a single, which was followed by Miller’s double that put McNally at third. Blanchette entered the game as Miller’s courtesy runner and both runners were scored on Beckett’s single, making it 12-0. The Go-Hawks were able to get bases loaded after plating those two runs, as Beckett advanced to third by a stolen base and wild pitch, while Jacey Meier drew another walk and Avery Meier was hit-by-pitch. However, the inning would come to a close with a pop up to Oelwein’s second baseman, Madison Kunkle by Willey.

Oelwein put four batters in the box during the bottom of the fourth, but Waverly-Shell Rock was able to make quick work of the Huskies, as they went on to take the game, 12-0.

Hagarty pitched again for the Go-Hawks in game No. 2, as she threw four innings, allowed two hits, walked one and struck out eight. Beckett went 3-3 at the plate with four RBIs, while Mraz also had two RBIs and went 2-3.

Throughout both games, Zajicek and her squad were impressed with their ability to score several runs with two outs.

“I didn’t even realize it, but the girls were talking about it,” Zajicek said. “We scored a lot of runs with two outs. That’s hard for some teams to do. It’s easy to get down, but the girls did a great job of continuing to score runs. That was awesome to see.”

The Go-Hawks have one final regular season and conference date on their calendar, as they traveled to Oelwein on Monday, July 8 for a single game.

After Monday’s game, the Go-Hawks will turn their focus to the postseason, where they will face Mason City again in Mohawk territory on Thursday, July 11 at 7 p.m.

Zajicek said the Go-Hawks have simply been getting better each time they take the field – all in an effort to be at their best come the regional tournament.

“We have literally talked since May that we are playing for July,” Zajicek said. “We knew it was going to take some time and that’s hard. The girls have remained positive with each other and encouraging, even if the scoreboard shows that we should be feeling something else. They are still looking to find ways that they can grow. We’ve always had the growth mindset that we can always get better and not settling for where we are at. We just have to keep progressing as far as we can until July 11.”