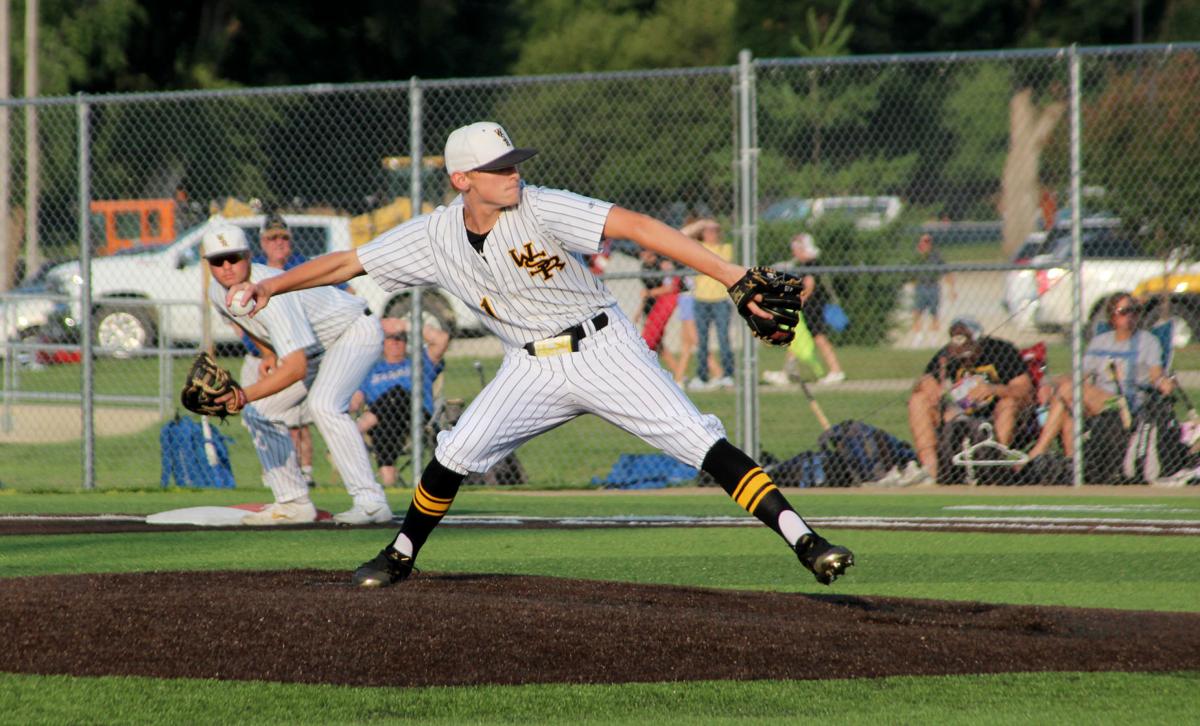 Waverly-Shell Rock junior Carson Graven delivers a pitch during a Class 3A, Substate 2 semifinal against Humboldt on Monday, July 19, 2021, at Harms Stadium at Hertel Field in Waverly. 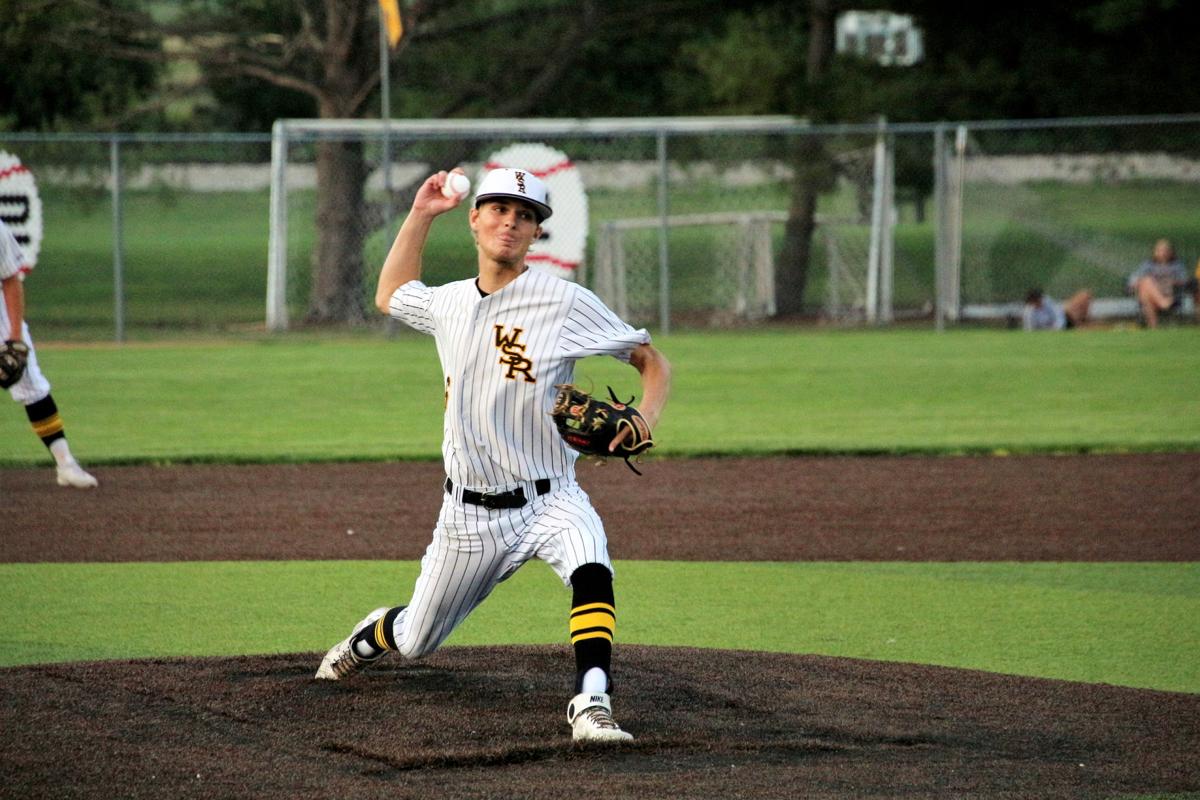 Waverly-Shell Rock senior Ben Buseman throws a pitch during a Class 3A, Substate 2 semifinal vs. Humboldt on Monday, July 19, 2021, at Harms Stadium at Hertel Field in Waverly. 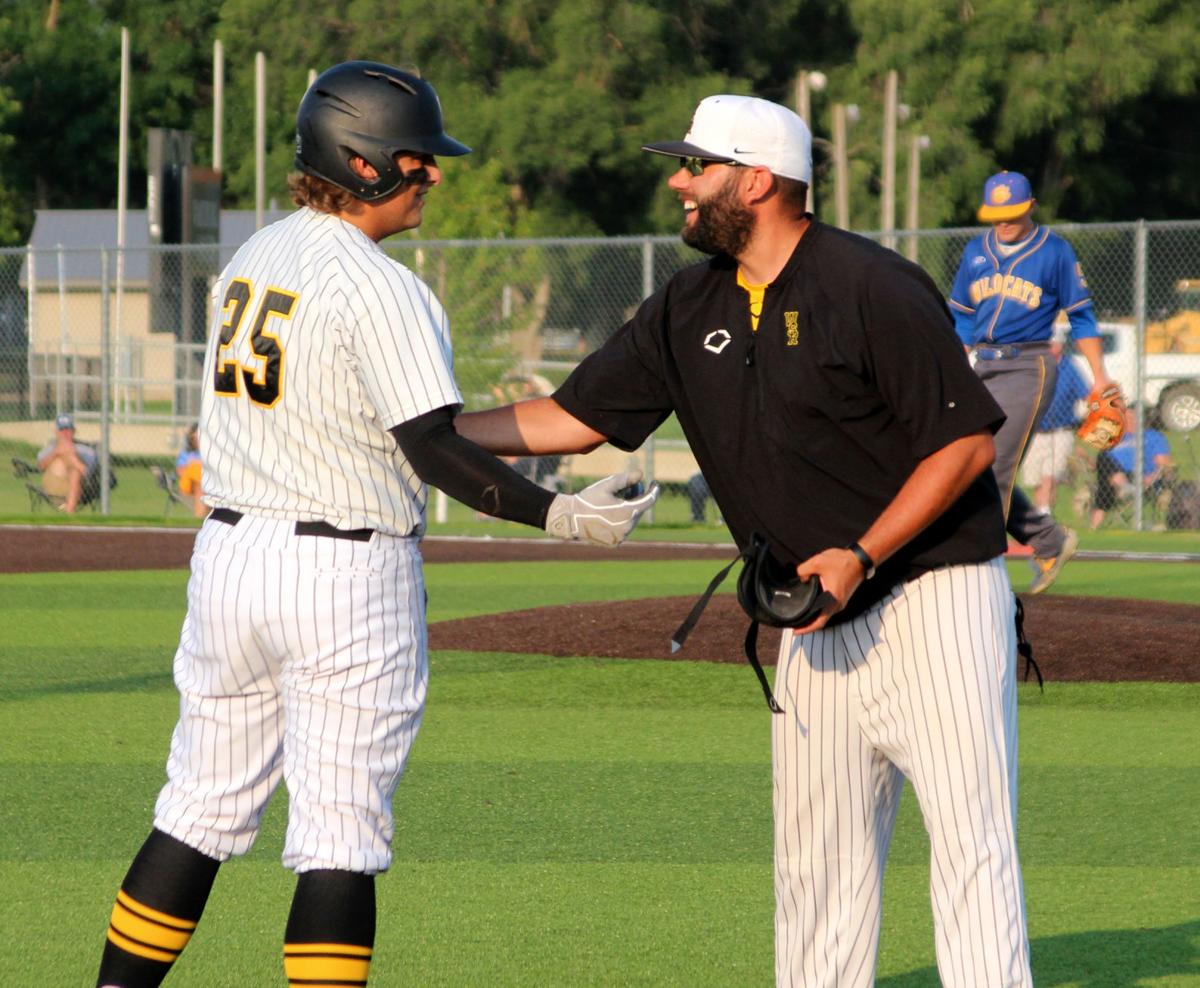 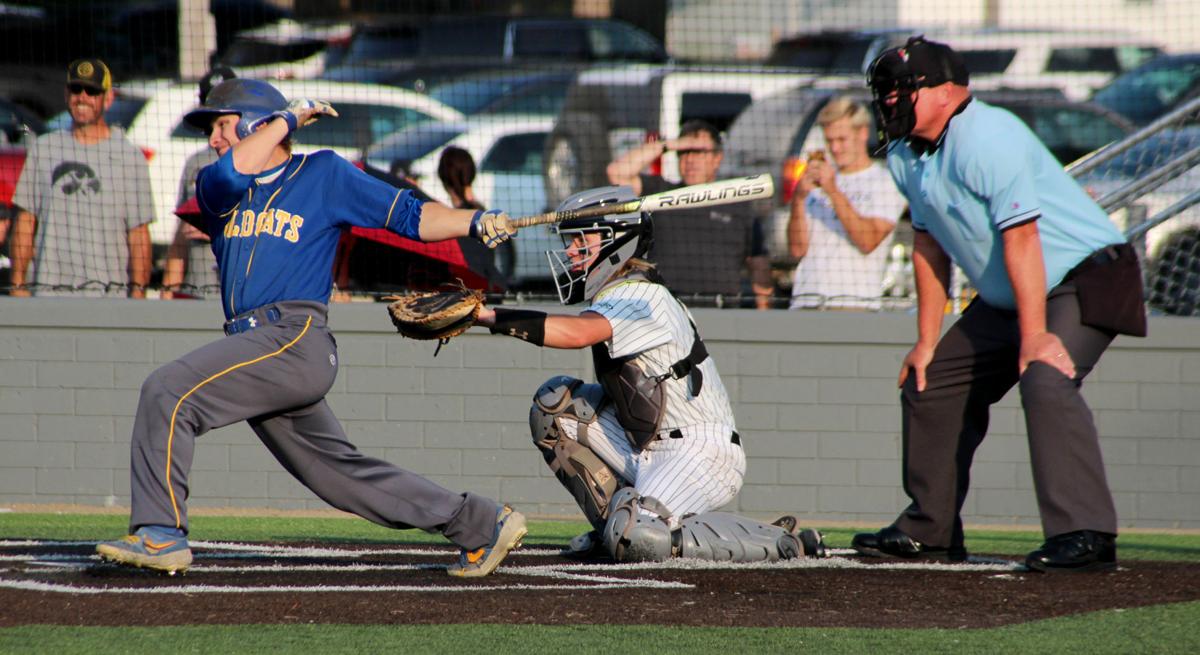 Waverly-Shell Rock senior catcher Luke Shover tracks a pitch during a Class 3A, Substate 2 semifinal against Humboldt on Monday, July 19, 2021, at Harms Stadium at Hertel Field in Waverly. 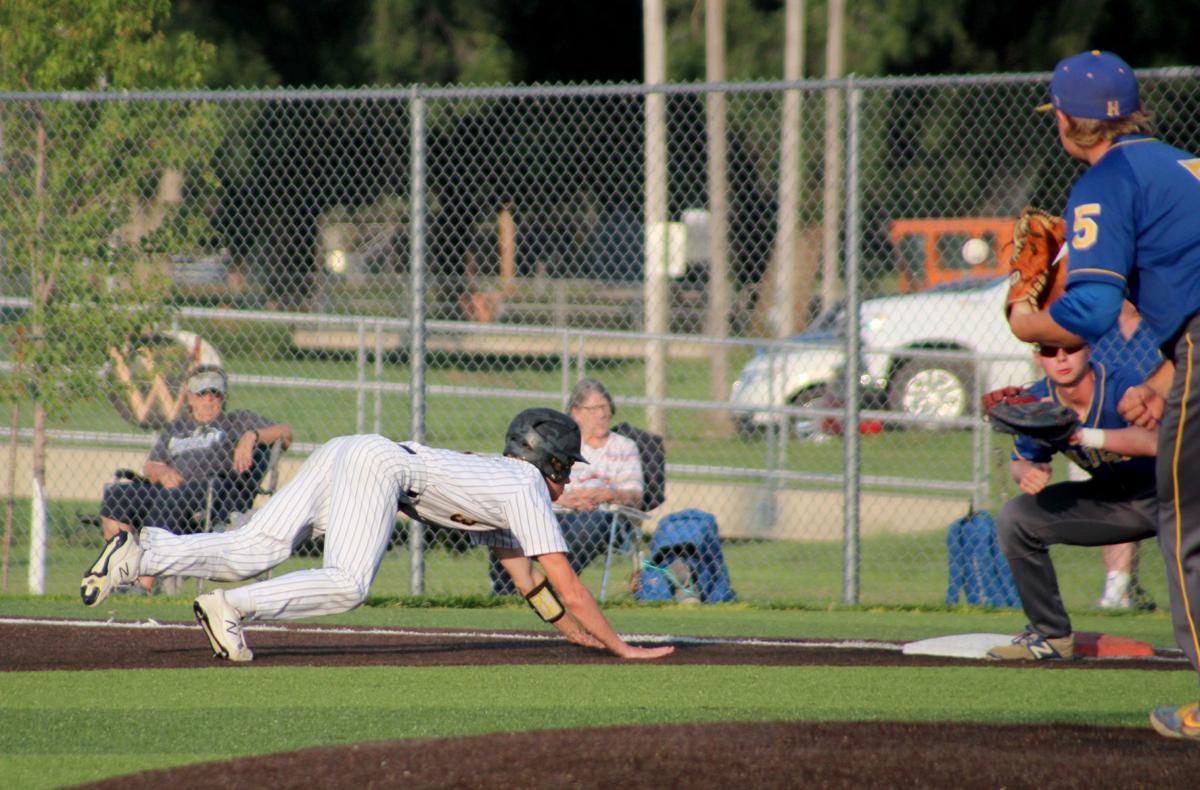 Waverly-Shell Rock sophomore Jack Wilson dives head-first toward first base after a pickoff attempt from Humboldt pitcher Cade Witzke during a Class 3A, Substate 2 semifinal Monday, July 19, 2021, at Harms Stadium at Hertel Field in Waverly.

Waverly-Shell Rock junior Carson Graven delivers a pitch during a Class 3A, Substate 2 semifinal against Humboldt on Monday, July 19, 2021, at Harms Stadium at Hertel Field in Waverly.

Waverly-Shell Rock senior Ben Buseman throws a pitch during a Class 3A, Substate 2 semifinal vs. Humboldt on Monday, July 19, 2021, at Harms Stadium at Hertel Field in Waverly.

Waverly-Shell Rock senior catcher Luke Shover tracks a pitch during a Class 3A, Substate 2 semifinal against Humboldt on Monday, July 19, 2021, at Harms Stadium at Hertel Field in Waverly.

Waverly-Shell Rock sophomore Jack Wilson dives head-first toward first base after a pickoff attempt from Humboldt pitcher Cade Witzke during a Class 3A, Substate 2 semifinal Monday, July 19, 2021, at Harms Stadium at Hertel Field in Waverly.

Carson Graven trotted out to the home bullpen, behind the third-base dugout, for his warm-up tosses. First pitch was 20 minutes away. His jersey was unbuttoned and untucked, his sunglasses pulled down, headphones tuned into whatever songs were up next on his playlist.

Graven was calm, collected and ready. His demeanor was loose, his focus sharp. Each of his throws to battery mate Luke Shover were in step with each beat buzzing through his earbuds.

When the Waverly-Shell Rock hurler took the field for the national anthem, he remained laid-back, unfazed to the chatter around him. He took a deep breath, then fired a first-pitch strike to open Monday’s Class 3A, Substate 2 semifinal against Humboldt.

The W-SR junior saved his best outing of the season for the biggest game to date, operating behind a foundation of trust between him and Shover, his catcher, while painting the zone with fastballs and spinning curveballs short of the plate. Graven fanned 10 over six innings, providing the type of start his team needed, and helped lead the Go-Hawks to a 4-1 win to advance to Wednesday’s Substate 2 final at Webster City.

“It started on the mound,” W-SR coach Casey Klunder said. “Graven was fantastic from pitch No. 1. He was throwing hard. He threw breaking balls for strikes. He threw a breaking ball when he wanted them to miss in the dirt. He really set the tone for us.”

The Go-Hawks’ tone-setter got an assist from Shover before many in the bleachers settled into their seats. After getting two quick strikes on Caden Matson, the Humboldt junior shortstop lined a single to left, and the Class 3A leader in stolen bases was now aboard. He didn’t hesitate. Matson broke for second with senior Cade Witzke at the plate. Shover fired a bullet to senior shortstop Ben Buseman, who swiped the foot of Matson, who was called out by at least a step.

Shover unleashed a deep bellow in excitement. He served up an early warning to those that attempted to steal on his watch. The run game – a staple of Humboldt’s offense – wouldn’t come easy, if at all.

“That play served us in a multitude of ways,” Klunder said. “Obviously the big out, getting the leadoff hitter out, but also a huge momentum swing, and I think it shut down their running game. They’re a team that likes to run, and they didn’t try again after that.”

Shover’s highlight-reel play sent a shockwave of energy through the home dugout. His teammates fed off the momentum during their first turn at bat.

Graven ignited a rally with an infield single. Junior slugger Chance Key followed with an RBI triple to deep right-center field, and the Go-Hawks (32-7) took a 1-0 lead. It was Key’s fourth triple of the season, tying him with classmate Korbyn Dewey for the team lead. Senior center fielder Andy Roose made it 2-0 with an RBI groundout before Shover drove in the third run of the frame with a fly out to right.

“It was huge,” Graven said of the first inning. “Can’t win without offense.”

Can’t win without solid pitching, especially at this point in the season, either.

Graven was solid, to say the least.

He retired the next eight hitters in row and struck out the side in the third. The ball did not leave the infield during that span.

In the meantime, W-SR added to its lead in the second. Looking for another big thump to bust open the game early, Key took a ball off his arm with the bases loaded, forcing in a run to make it 4-0. Key pumped up his teammates as he jogged toward first base.

Twice Humboldt hit the ball out of the infield during their first 10 at-bats. Matson had both hits, including a single to right to lead off the fourth. He moved to second on a wild pitch, but Graven recovered. Of the next three hitters he faced, only one made contact – a grounder to second by Witzke; the other two struck out.

“It was pretty big,” Graven said of his strikeout total. “My last time, I wasn’t quite as good out there on the mound as I could’ve been. So, (it) was a pretty big thing to get me going again.”

Graven began to fade in the sixth. He hit No. 7 hitter Ty Garano and walked Trevor Jacobson to begin the inning. Matson, who singled during both of his previous at-bats, went down swinging. Witzke helped himself out with an RBI single to left to get Humboldt on the board and cut W-SR’s lead to 4-1. Graven avoided further damage with a pair of fly outs to curb the rally.

“I just trusted my defense behind me,” he said. “They were the whole reason why I was up there and why I did so well. I struggled in the first inning and the last inning I pitched, but they helped me get through it.”

With a three-run lead and needing three outs to advance, Klunder turned to Buseman, W-SR’s closer and the state’s leader in saves.

Buseman threw his first pitch and got the first out, a fly out to right. An error and base hit put two on for Humboldt before Garano flew out to center. A walk to Jacobson loaded the bases, put the tying run at first and brought the go-ahead run to the plate in – who else? – Matson.

Buseman stepped off the rubber, scanned his defense and gathered himself. With the count 2-2, Buseman pumped a pitch toward the plate. Matson chopped a grounder to sophomore Will Soesbe at third, who stepped on the bag and sent the Go-Hawks to the Substate 2 final.

W-SR’s dugout emptied and the celebration was in full swing. The save was Buseman’s 11th of the season. It was also an historic one: His 11 saves are believed to be the most during a single season in the history of Iowa high school baseball.

“It’s nice that they rely on me for that, but it’s easier being able to go out there again when you know you have a great defense and you know that if I’m pitching multiple innings, I’m going to get the run support I need,” Buseman said. “We have a fantastic team, and there’s no other team I’d rather be on.

“It’s having trust in your guys and companionship. I know them, they know me. We’re both fighting for each other, and we all want to win.”