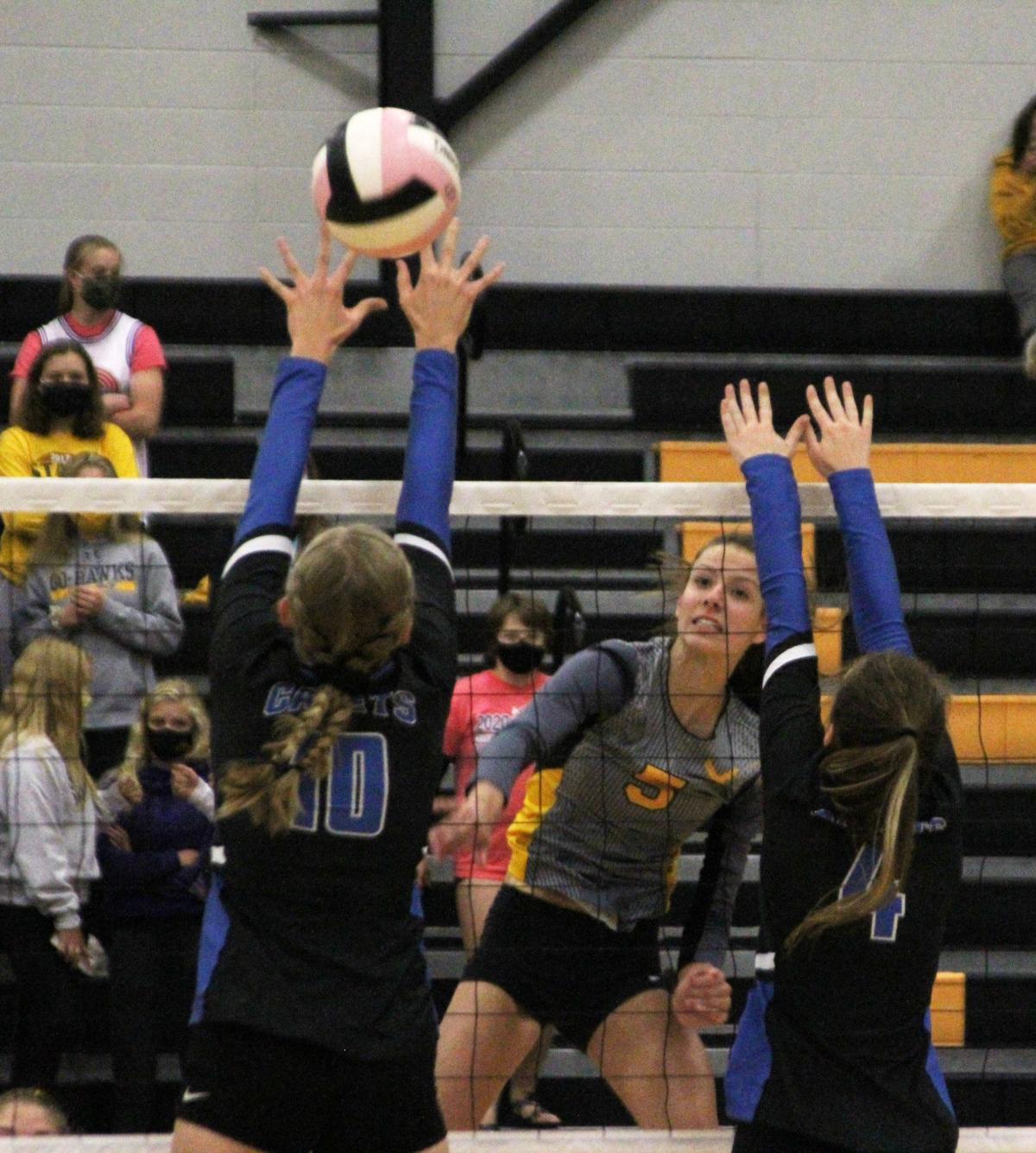 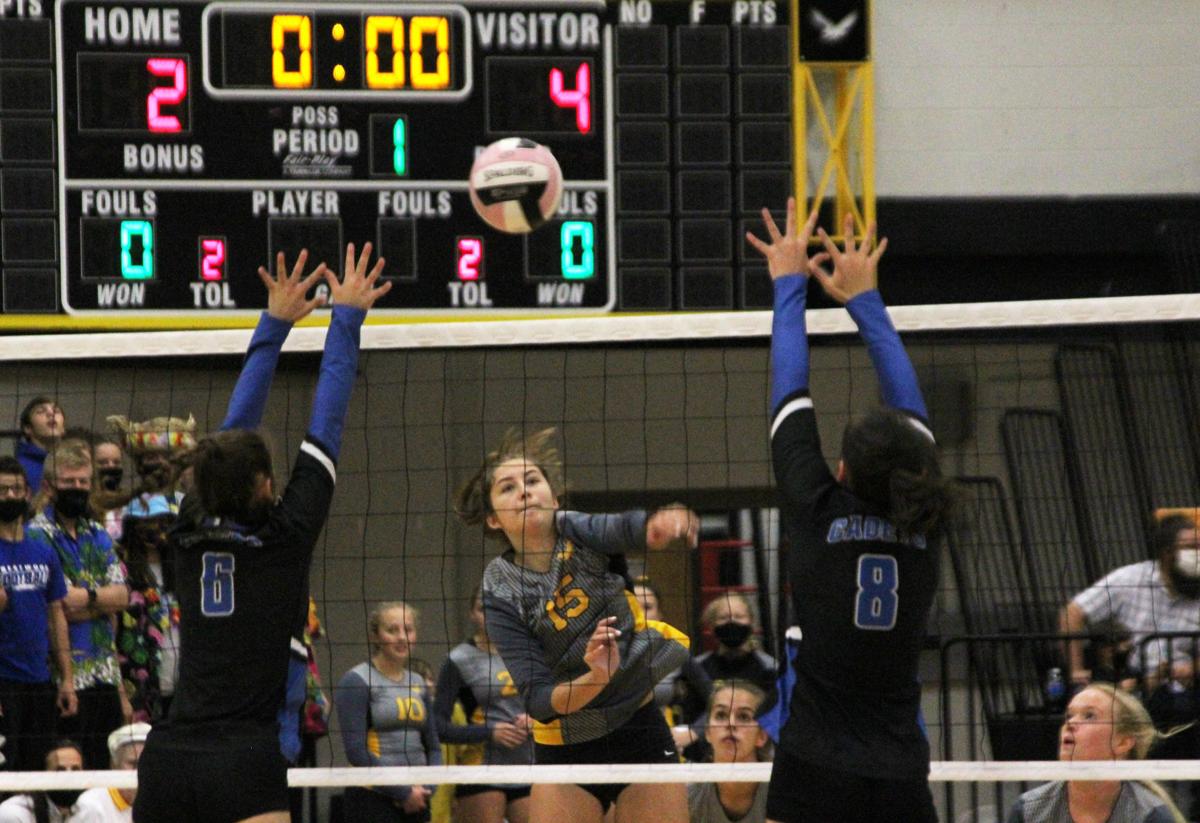 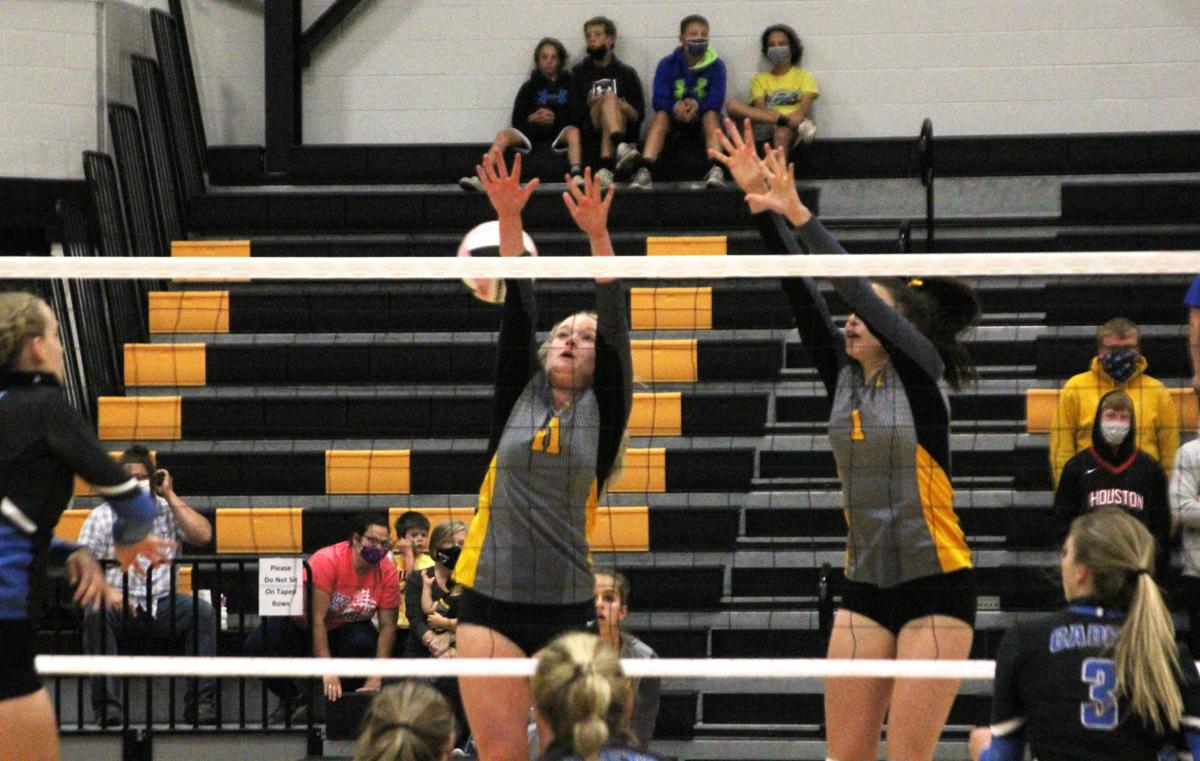 Waverly-Shell Rock sophomores Sophie Sedgwick (11) and Ellie Thompson (1) jump up for a block during a volleyball match against Crestwood on Tuesday, Sept. 8, 2020, at W-SR High School in Waverly. 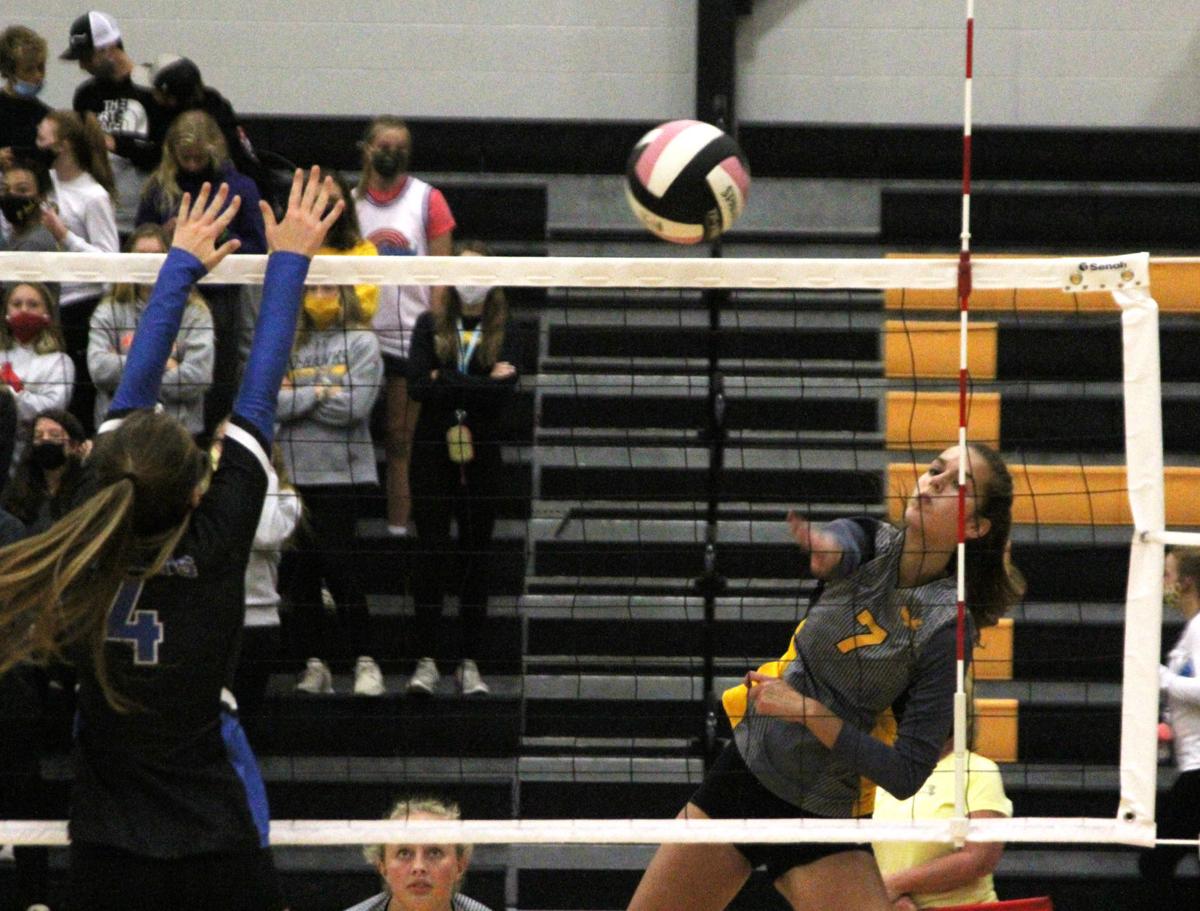 Waverly-Shell Rock sophomores Sophie Sedgwick (11) and Ellie Thompson (1) jump up for a block during a volleyball match against Crestwood on Tuesday, Sept. 8, 2020, at W-SR High School in Waverly.

The majority of the Go-Hawks’ starting lineup had limited varsity experience entering the season, and that showed in the first half of the opening set in their home opener against the Cadets.

W-SR struggled to connect on attacks, keep the ball in bounds and, in some cases, get the ball over the net successfully.

“We just didn’t have a lot of energy,” longtime W-SR coach EaVon Woodin said of her club.

Time was all the Go-Hawks needed.

Reagan Dahlquist squared up a kill to put the No. 8-ranked Class 4A Go-Hawks ahead 7-6. They never relinquished it.

Standout hitter Avery Beckett, a junior who committed to Division I University of South Dakota, slammed a successful hit to extend the Go-Hawks’ lead to 11-8 in the first set. The kill started a 5-2 W-SR run that separated the first set for good. Setter Sophie Sedgwick handed the Go-Hawks a 1-0 lead in the match with one of her three kills on the night.

“All of us getting on the court and getting those nerves out was really helpful,” Beckett said of the first set. “We were all ready for the next set. We just had to get that first one under our belt.”

Entering Tuesday’s contest, Thompson had yet to attempt a serve.

First time was a charm for the sophomore.

The Go-Hawks (11-3) played with more focus, and the energy they lacked in the first set was directed toward the Cadets in the second set. W-SR began on a 5-0 run to take control. Then, Thompson got her first crack at serving.

“That was a really big deal,” Beckett said of Thompson’s serving success. “Her being an underclassman, underclassmen understood they can help us out, and they can get points for us.”

A 6-0 W-SR lead to begin the third set was reduced to an 11-7 lead as Crestwood began showing signs of life. But ace serves from Jenna Willey and Ashli Harn helped secure the sweep for the home team and improve what has become an impressive run against Crestwood over the years. Since 2006, W-SR is 28-0 against the Cadets and has won 68 of 71 sets.

The Go-Hawks combined for 10 aces on 54 of 62 serving. Meanwhile, they hit .450 as a team – with the majority of their collective 36 kills coming in the second and third sets. Harn finished with eight kills, while Thompson, Dahlquist and Brooke Willis had three apiece. Annika Behrends scooped a team-high 14 digs.

Now that the first home match is behind them, they can exhale and, more importantly, regroup.

“They’ve just got to realize they’ve got to play hard, no matter what the other team plays like,” Woodin said. “They’ve still got to put their (best) out there, and sometimes that’s not always so easy to do.”