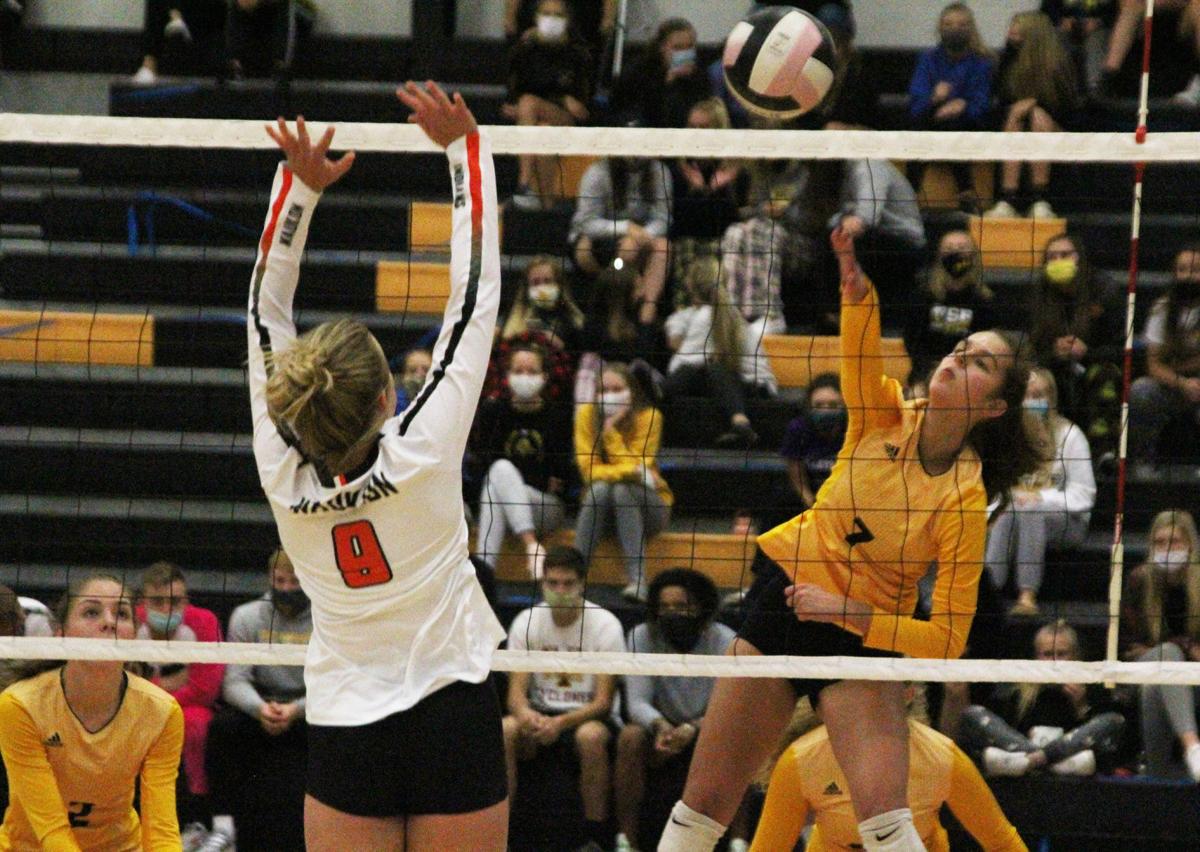 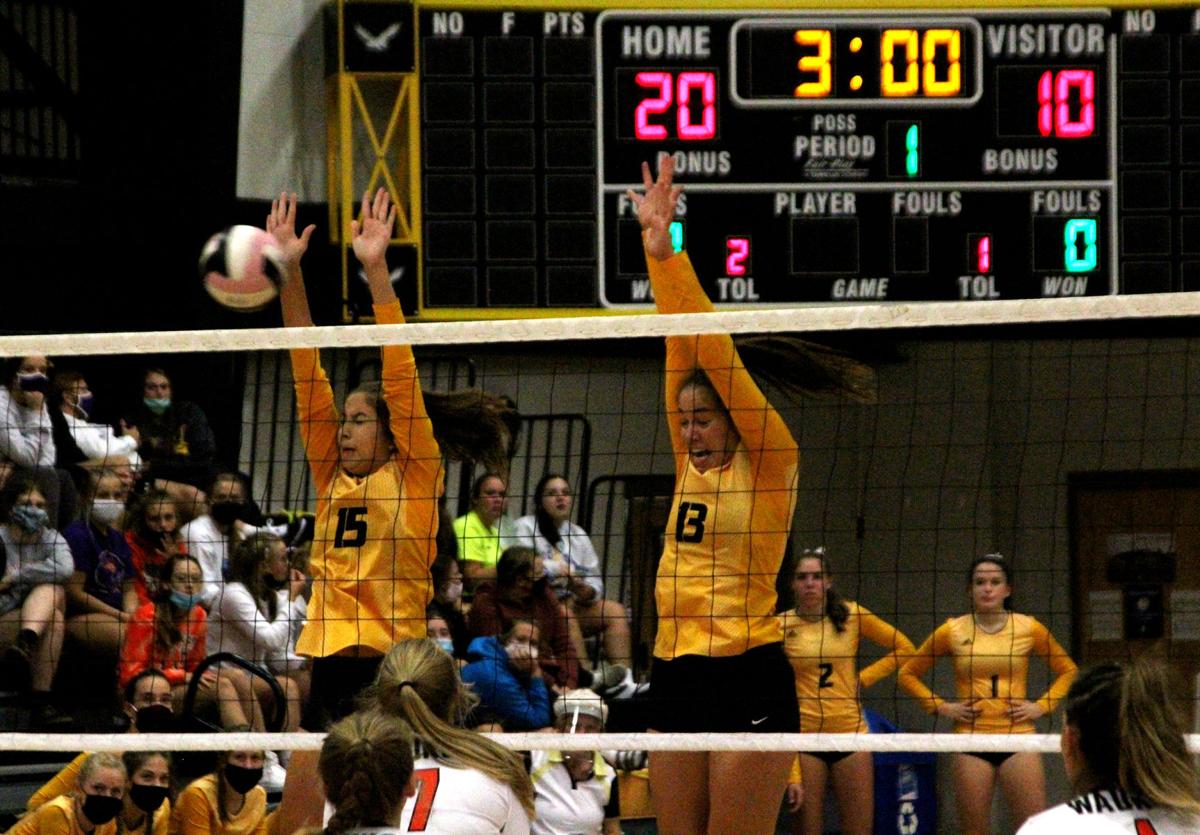 Waverly-Shell Rock junior Brooke Willis (15) and sophomore Elizabeth Frerichs (13) team up for a block during a match against Waukon on Tuesday, Sept. 29, 2020 at Go-Hawk Gymnasium. 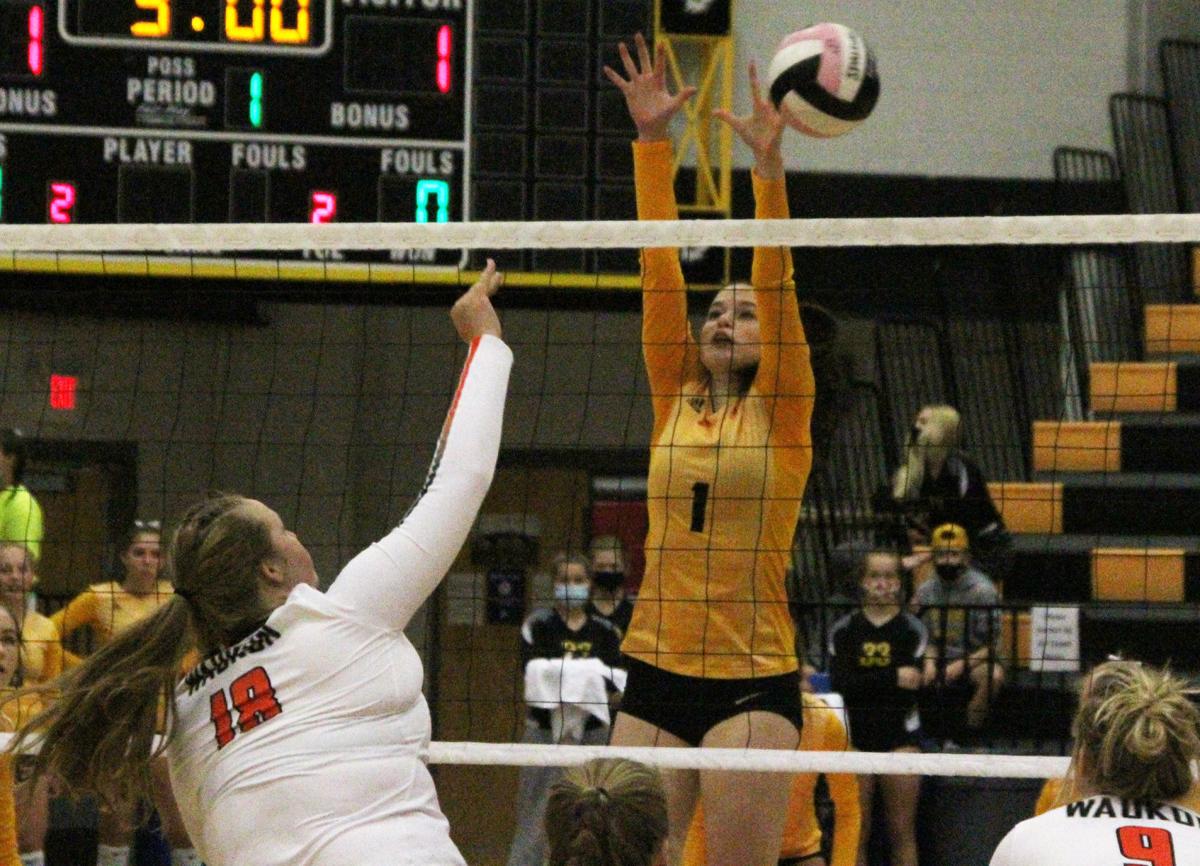 Waverly-Shell Rock junior Brooke Willis (15) and sophomore Elizabeth Frerichs (13) team up for a block during a match against Waukon on Tuesday, Sept. 29, 2020 at Go-Hawk Gymnasium.

WAVERLY – Waverly-Shell Rock had played two dozen matches entering the final week of September. Just one of those had been at home.

W-SR remained both perfect at home and in the Northeast Iowa Conference with a 25-12, 25-21, 25-14 sweep over Waukon at Go-Hawk Gymnasium. It was another dominant performance by the Go-Hawks, who are 26-0 against the Indians since 2008 and have won all 66 sets during that span.

Their last win on their home court was three weeks ago – a sweep over Crestwood. True, the Go-Hawks normally play just a few matches at home each season, not including its home tournament, but playing in front of their friends and families adds another dynamic to each match.

It showed in multiple ways Tuesday.

Much like their match against the Cadets, the No. 6-ranked Go-Hawks (19-6 overall, 3-0 NEIC) weren’t as sharp as they normally are from the opening serve against the Indians.

“With the students behind you, I think they’re not used to playing (in front of them) so much,” W-SR coach EaVon Woodin said. “They get distracted a little bit, but they came out of it.”

There were six lead changes and five ties during the first 15 points Tuesday night. Then W-SR junior hitter Ashli Harn, who practiced for the first time Monday after spending the last two weeks in quarantine, powered a pair of kills to give her club a 9-7 lead. A 10-2 W-SR run widened its lead to 15-9. Junior Annika Behrends scored two ace serves to push margin to 20-10 before the Go-Hawks wrapped up the first set and grabbed a 1-0 lead.

“We just have to push through,” Harn said. “… and then we have to get together as a team, and it just makes us better when we keep talking to each other.”

After graduating a good portion of their roster from last season, the Go-Hawks have had to learn on the fly. Or, in this case, by each serve. Many of them entered the 2020 season with little to no varsity experience.

One player has emerged as an offensive threat. Junior Avery Beckett has proven her ability to turn a match upside down at any time. Beckett, who posted a match-high 20 kills Tuesday, leads all classes with 298 kills this season – three more than Clarion-Goldfield-Dows senior outside hitter Morgan Middleton. It’s clear opposing teams key on Beckett.

Another Go-Hawk has also emerged: Harn.

Harn is becoming quite the complement to Beckett. Harn recorded 10 kills on 21 attempts with just two errors for a .381 hitting efficiency against the Indians (4-4, 0-4). She also was 7 of 10 from beyond the service line and scooped four digs. She helped turn the first set around for the home team and provided them momentum they never relinquished.

“She is steady,” Woodin said of Harn. “She’s not going to kill the ball as far as hitting as hard as Avery, but she’s going to hit her spots and keep the ball alive and do good things for us.”

Beckett, meanwhile, never slowed down offensively. She helped create some separation in the second set with a multitude of kills – she hit .485 for the match. Her teammates stepped up, too.

Sophomore Anna Stromberg served up one of her two aces to give the Go-Hawks a 10-8 advantage. Later on, Beckett gave W-SR a 2-0 lead in the match with another one of her kills.

“We work a lot on the middles and the right sides together with the setter,” Woodin said. “The left sides have to pretty much hit anything that anybody throws up there. We do that every day in practice, so it’s been good that we’ve have had some time in the past week that we’ve gotten to do that.

“We have eight, nine, 10 people that play every night, and we need everybody and everybody doing their jobs. Our back row did a very good job of passing, so that’s always a good way to start.”

Cloudy in the morning, then off and on rain showers during the afternoon hours. High near 45F. Winds ESE at 10 to 20 mph. Chance of rain 60%.