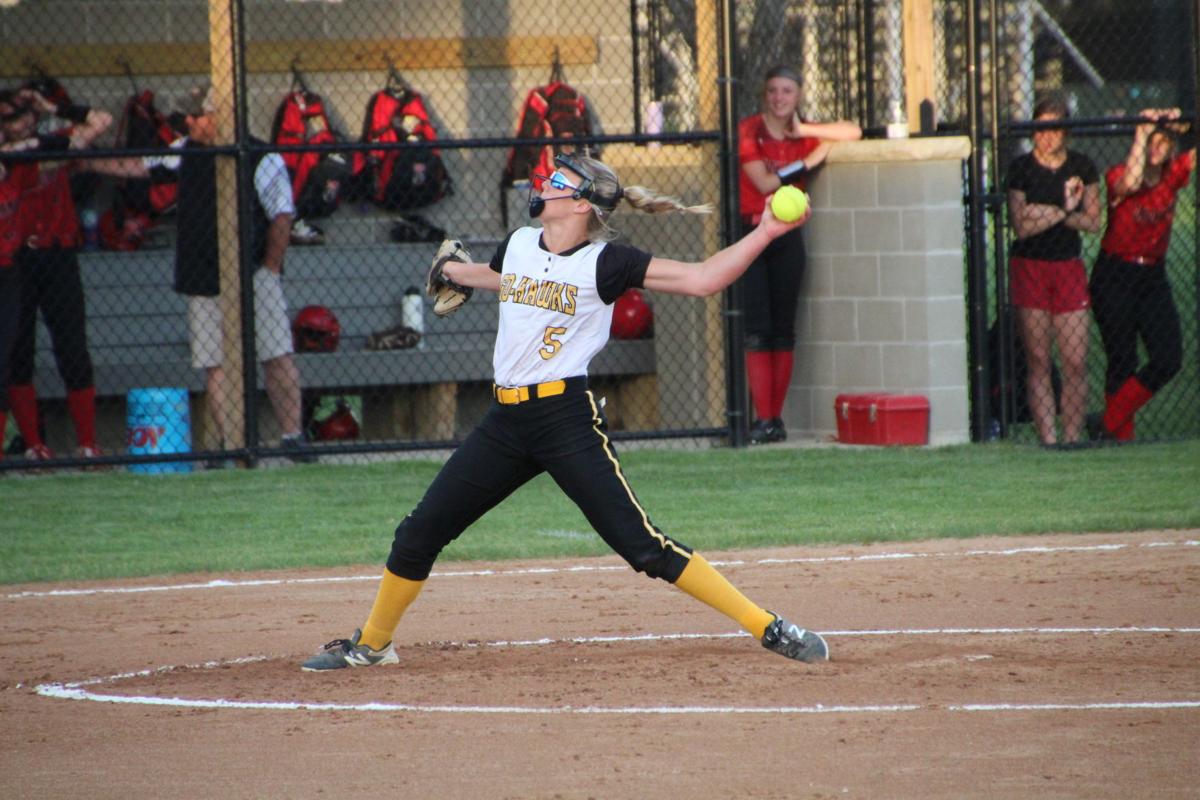 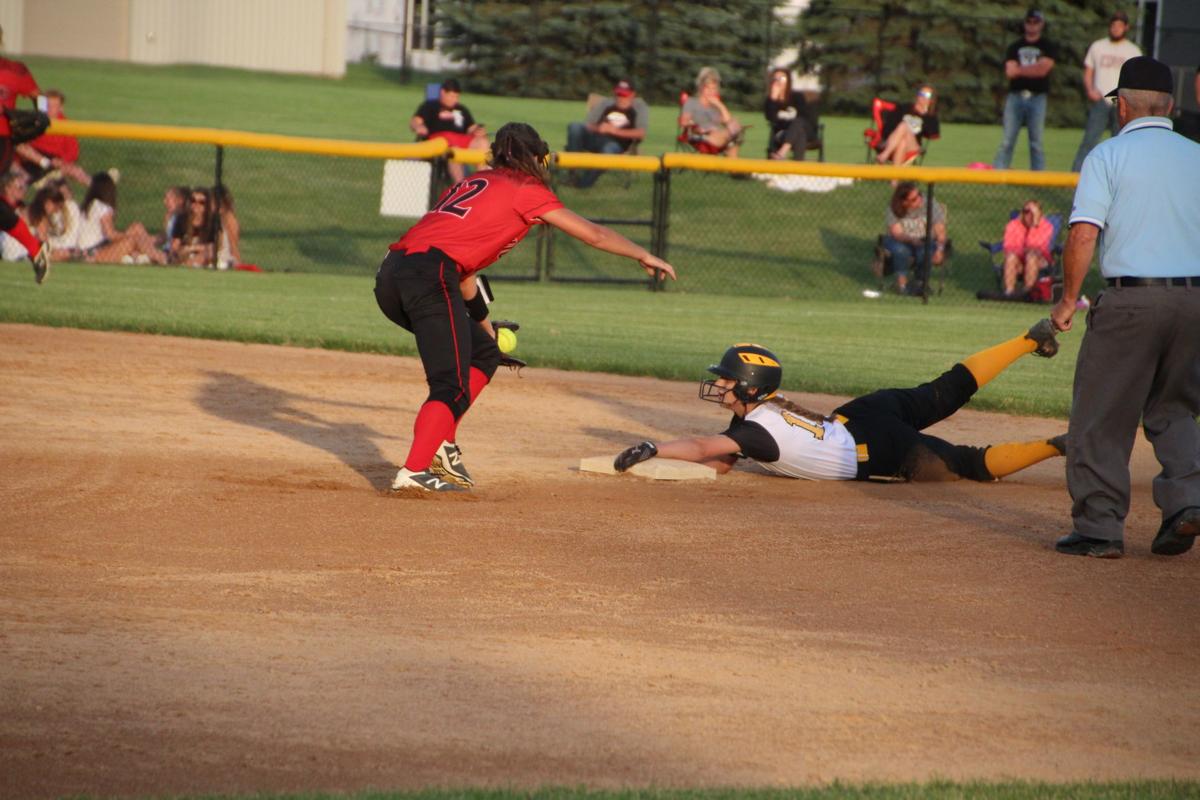 Waverly-Shell Rock's Haley Eckerman hangs on to second base after stealing it and getting around the tag of New Hampton's Hope McDonald in the first inning of the Go-Hawks' 1-0 victory over the Chickasaws Monday at W-SR High School. Eckerman would score the only run later in the inning. 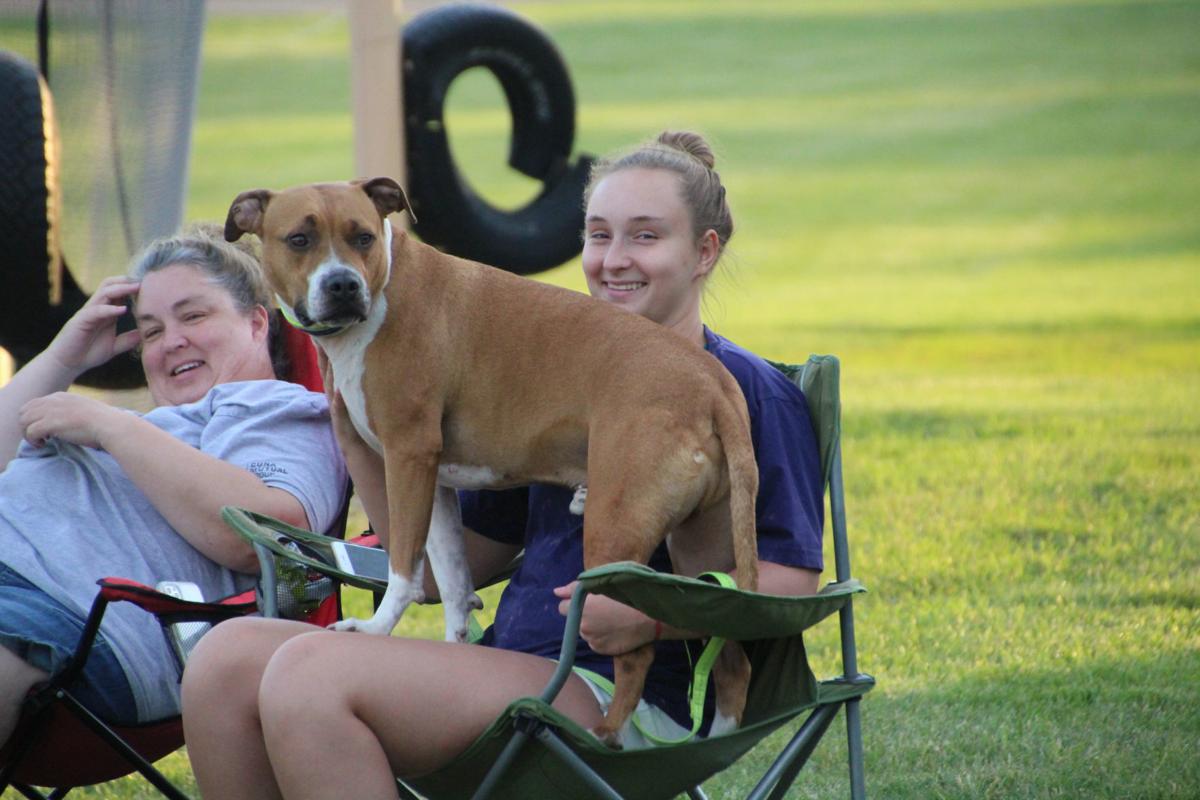 Rex, a 5-year-old pitbull-boxer mix, stands on the lap of Elizabeth Carolus while they watch the softball game between Waverly-Shell Rock and New Hampton at W-SR High School.

Waverly-Shell Rock's Haley Eckerman hangs on to second base after stealing it and getting around the tag of New Hampton's Hope McDonald in the first inning of the Go-Hawks' 1-0 victory over the Chickasaws Monday at W-SR High School. Eckerman would score the only run later in the inning.

Rex, a 5-year-old pitbull-boxer mix, stands on the lap of Elizabeth Carolus while they watch the softball game between Waverly-Shell Rock and New Hampton at W-SR High School.

It has been a long time coming.

Ever since the Waverly-Shell Rock girls’ basketball team lost in the Class 4A state quarterfinals to Center Point-Urbana on March 3 in Des Moines, the Go-Hawks hadn’t participated in a meaningful athletic competition due to the COVID-19 pandemic.

That was until Monday night. And, junior Marley Hagarty made it a memorable restart.

Hagarty struck out 18 New Hampton batters while giving up just one hit, walking seven and hitting a batter and made a first-inning unearned run stand up for the Go-Hawks in a 1-0 season-opening victory.

The left-hander didn’t expect that kind off a performance in in the circle on her first start of 2020.

“It was great for her to come out and pitch as well as she did,” Zajicek said. “Home opener, beautiful night, big crowd.”

Hagarty said it was a good thing to be able to play after the long layoff and the loss of the spring season.

“I think the team aspect, I mean everyone’s cheering, everyone’s talking,” she said. “It’s just so much fun to play.”

Zajicek agreed that the start of softball after a lost spring was good for morale.

“We tried to get in as much live pitching as we could, but two weeks, you can only get so much in,” she said. “It’s great to play another opponent other than ourselves. It’s a great night of softball.”

She added the ball felt good coming out of her hand. She had K’d six of the first nine batters she faced in the first two innings before giving up a lead-off bloop single to Michaela Fitzgerald in the third inning.

“It was really exciting (getting the strikeouts),” she said. “You set goals for yourself, and that’s a really big goal. One of my personal goals is to have more strikeouts than walks. I think that this year, I’m really going to achieve that.”

Hagarty sat down the side in order in the first inning, getting Fitzgerald and Maddie Usher swinging and Alexa Wemark looking.

In the bottom half, W-SR grabbed the advantage. Haley Eckerman led off with a base on balls, stole second and then took third on a passed ball. With one out, after Lindsey Miller walked, courtesy runner Alivia Bixby attempted to steal second, but the throw from catcher Wemark went to the right field side of second base and into the outfield, allowing Eckerman to score on the error.

In the second, Hagarty’s control started to show some waywardness, alternating walks with strikeouts. The Chickasaws were able to load the bases in both the second and the third, but the Go-Hawk southpaw was able to keep them off the scoreboard each time with K’s to end the innings.

In the fourth inning, Hagarty fanned Emma Reicherts before Ali Russler walked. After Kacey Olson went down swinging, Fitzgerald reached on a throwing error, and Russler took third on the play. But on the first pitch of the at bat to Usher, Russler went too far off third trying to get a jump on the play. Hagarty then smartly threw the ball to Eckerman, forcing Russler to try for the plate, but Eckerman got the ball to Miller for the put out and end the inning.

After that, Hagarty got back into the grove. She only allowed three more baserunners from the fifth inning onward while still racking up the punchouts. The game ended when Claire Quirk grounded out to Kasey Fox on a 1-2 count after a string of five strikeouts over the previous six batters.

That was only the fourth ball in play the entire night for the Chickasaws.

“I trust my infield around me,” Hagarty said. “I trust everyone behind me.”

She said her outside fastball was her key pitch on the night.

“Just as a lefty, it naturally goes over there, so it’s just easy,” she said.

Zajicek said the Chickasaws’ reaction to Hagarty’s pitching is possibly due to the fact it was the first game of the year and some uncertainty may have set in for them.

But both teams stranded 10 runners each, as neither team could get the clutch hit.

“We certainly had runners in scoring position down the stretch,” Zajicek said. “We have to do a better job of getting those runners scored that are on second and third, especially when we have no or one out. It’ll come.

“It was great to see that many baserunners get on base, but now we just really need to work to get them scoring.”

Hagarty said it’s unusual to be playing during a pandemic with the social distancing measures in place. Fans were advised to stay 6 feet apart, and the bleachers behind home plate were sparsely populated. As a result, most of the spectators were spread out all around the perimeter of the diamond.

“It’s weird not seeing my parents in the stands, so instead, they’re out in the outfield,” Hagarty said. “Either way, it’s really fun.”

Zajicek said her team showed some nerves even though several of them have returned from 2019.

“It’s the first game, it’s a new year,” she said. “Some of these kids haven’t competed in multiple months, so it was great to get this under their belt and get the season rolling.”

Hagarty said for the next few weeks of the coronavirus-shortened season, she hopes the team can work hard to make 2020 a successful one.