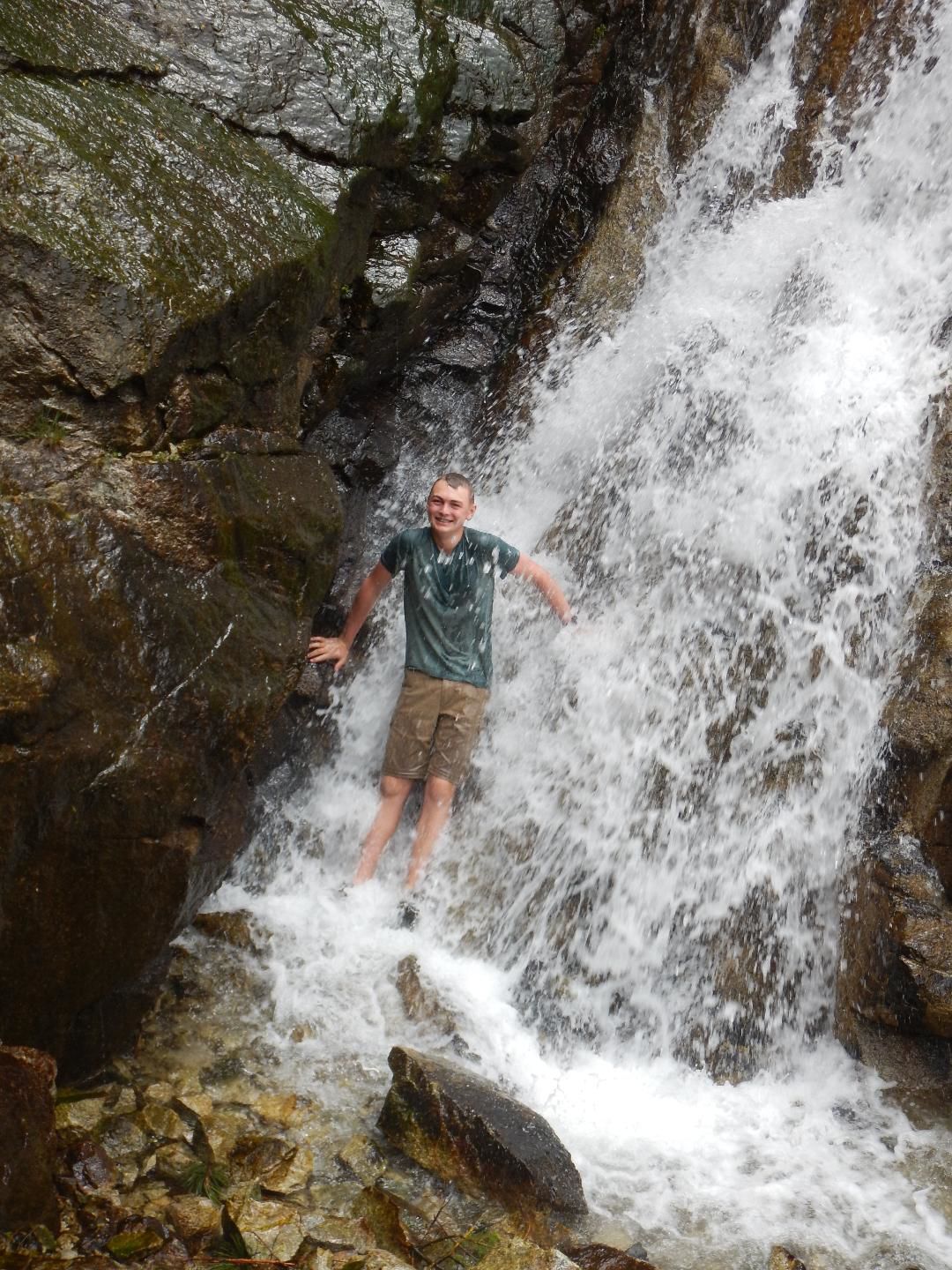 Bradley Sage stands in the falls. 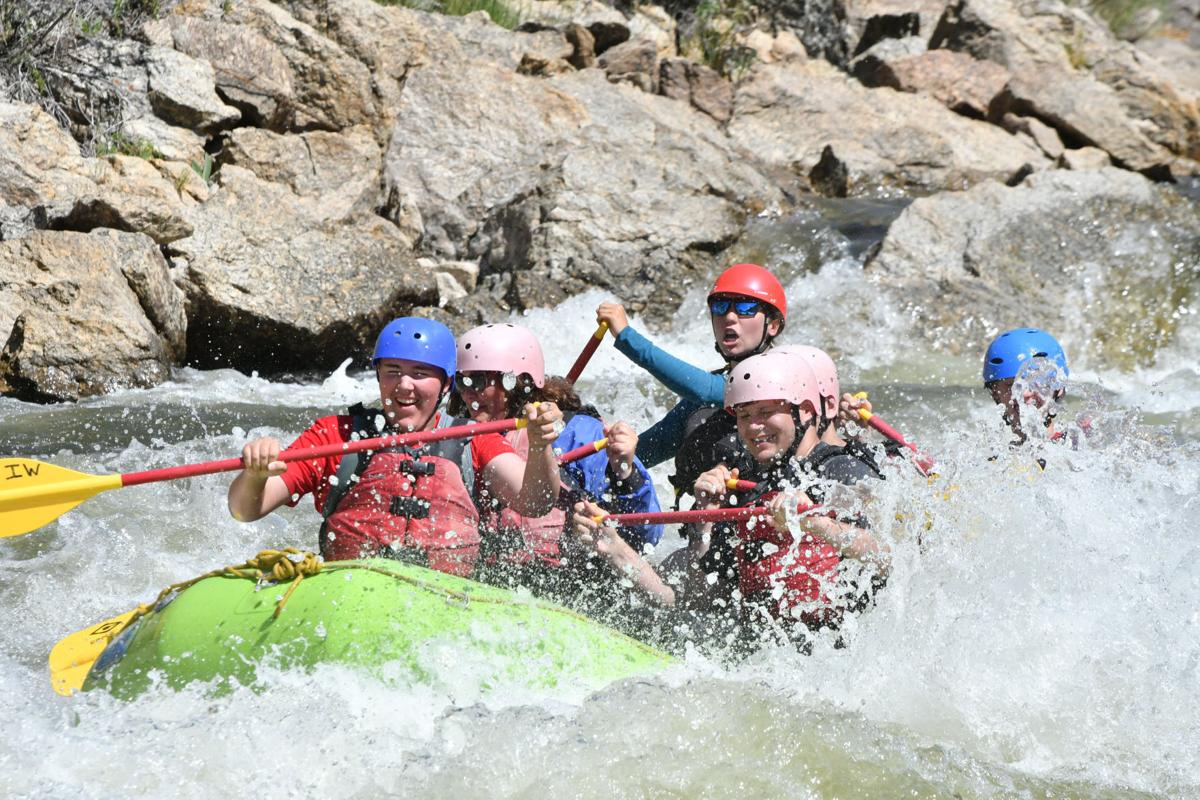 A group of W-SR rafters hits a wave and gets soak on while whitewater rafting on the Arkansas River. 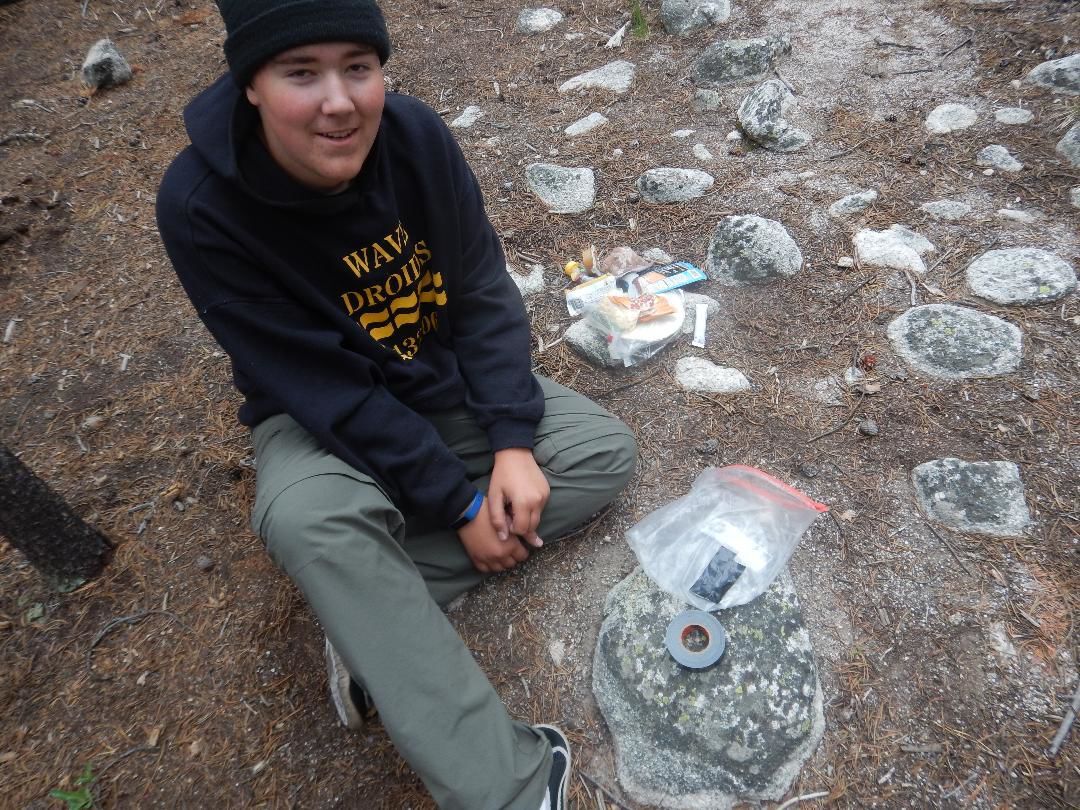 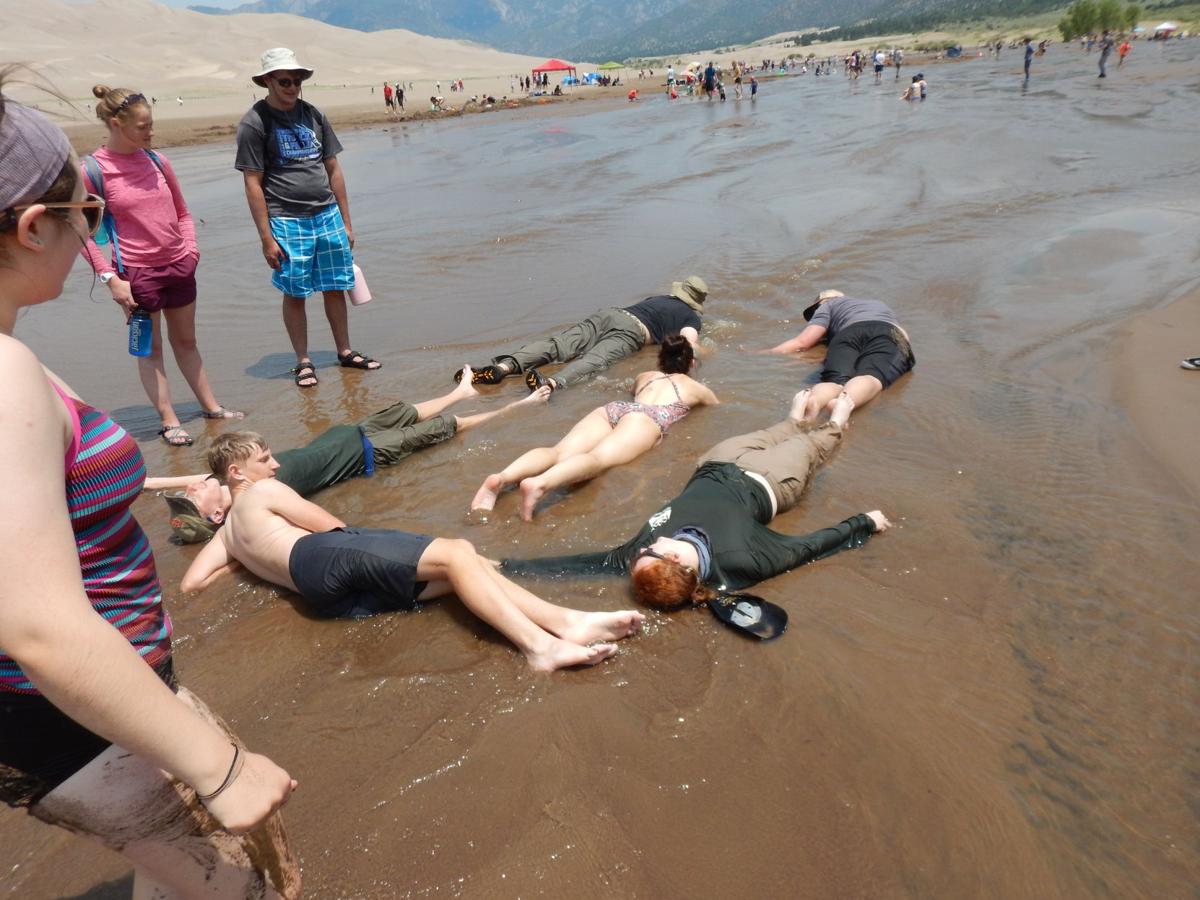 A refreshing creek is just the fix for a hike in the Great Sand Dunes National Park & Preserve. 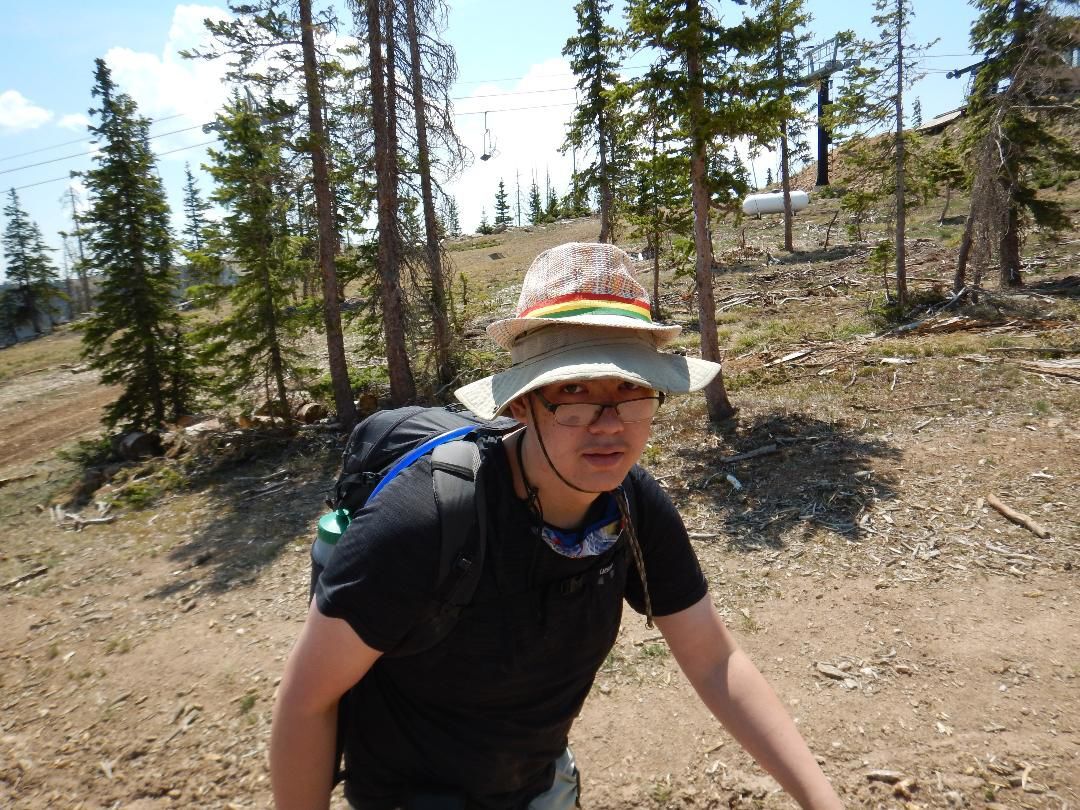 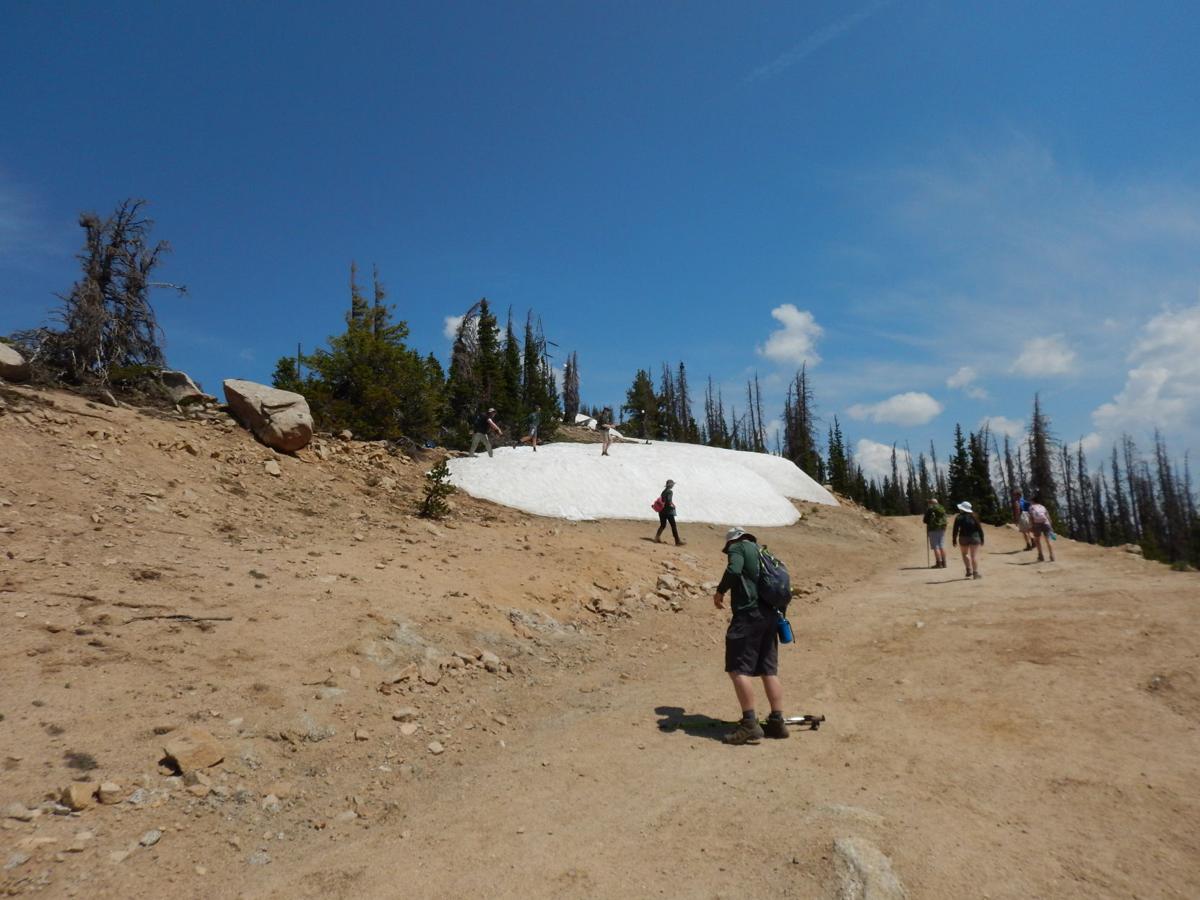 Acclimating to altitude brought the Waverly-Shell Rock students to a June snowball fight at 12,000 feet. Left: Bradley Sage stands in the falls. 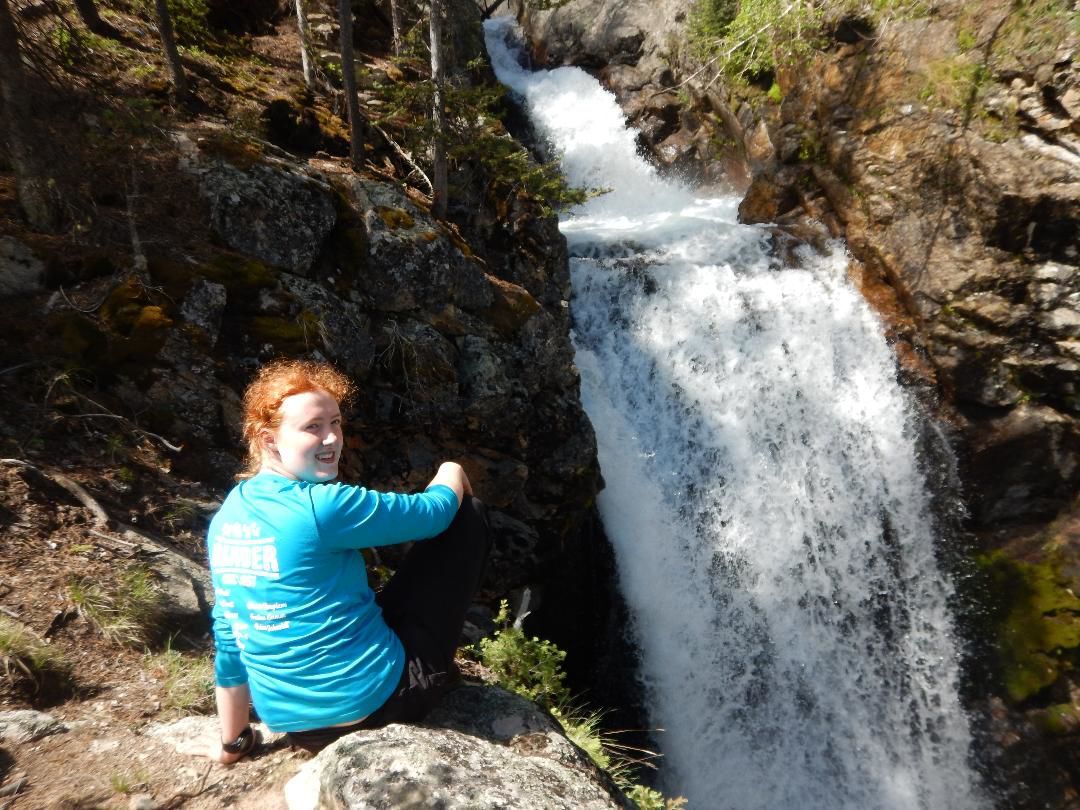 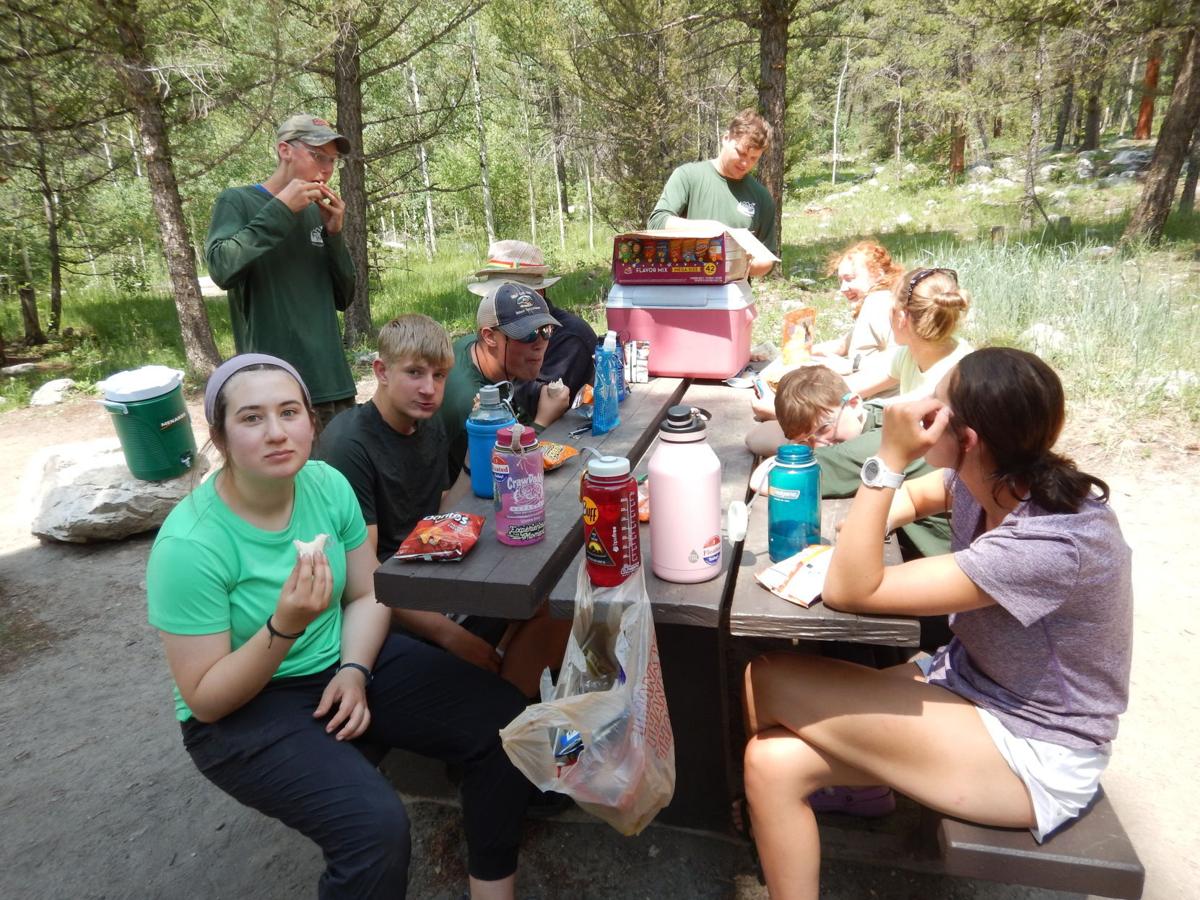 A mountain picnic lunch for the “Wilderness Family.” 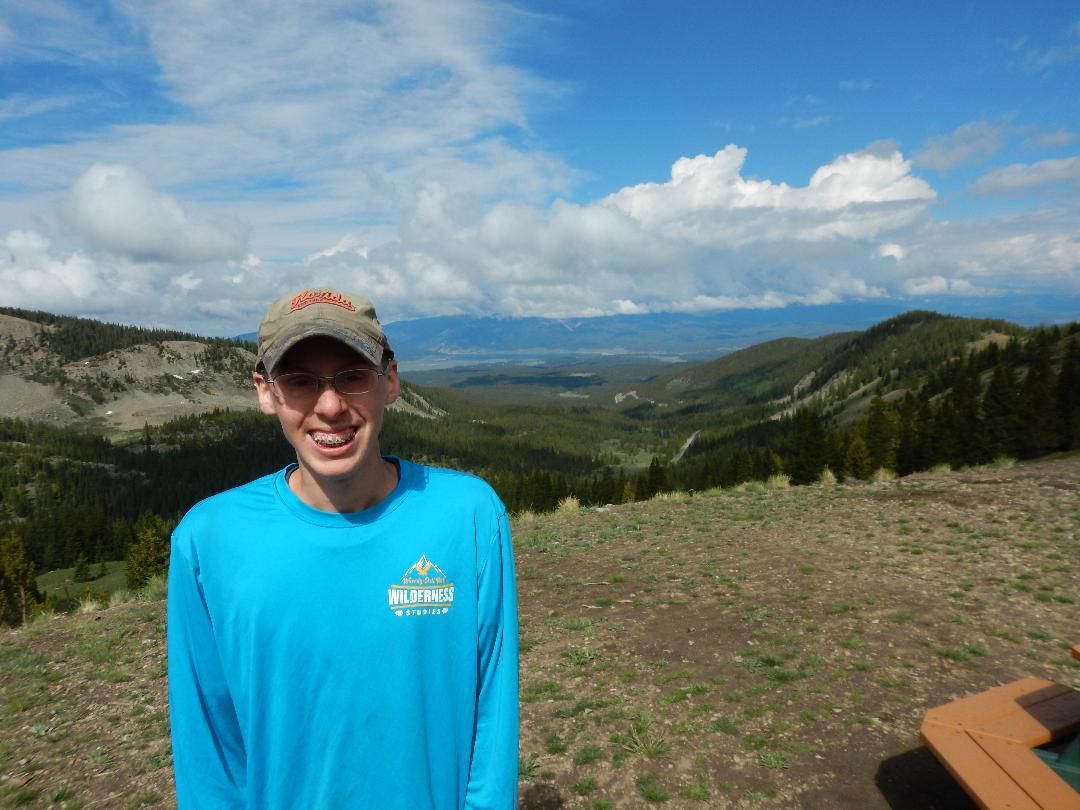 Joey Schmidt poses in the foothills 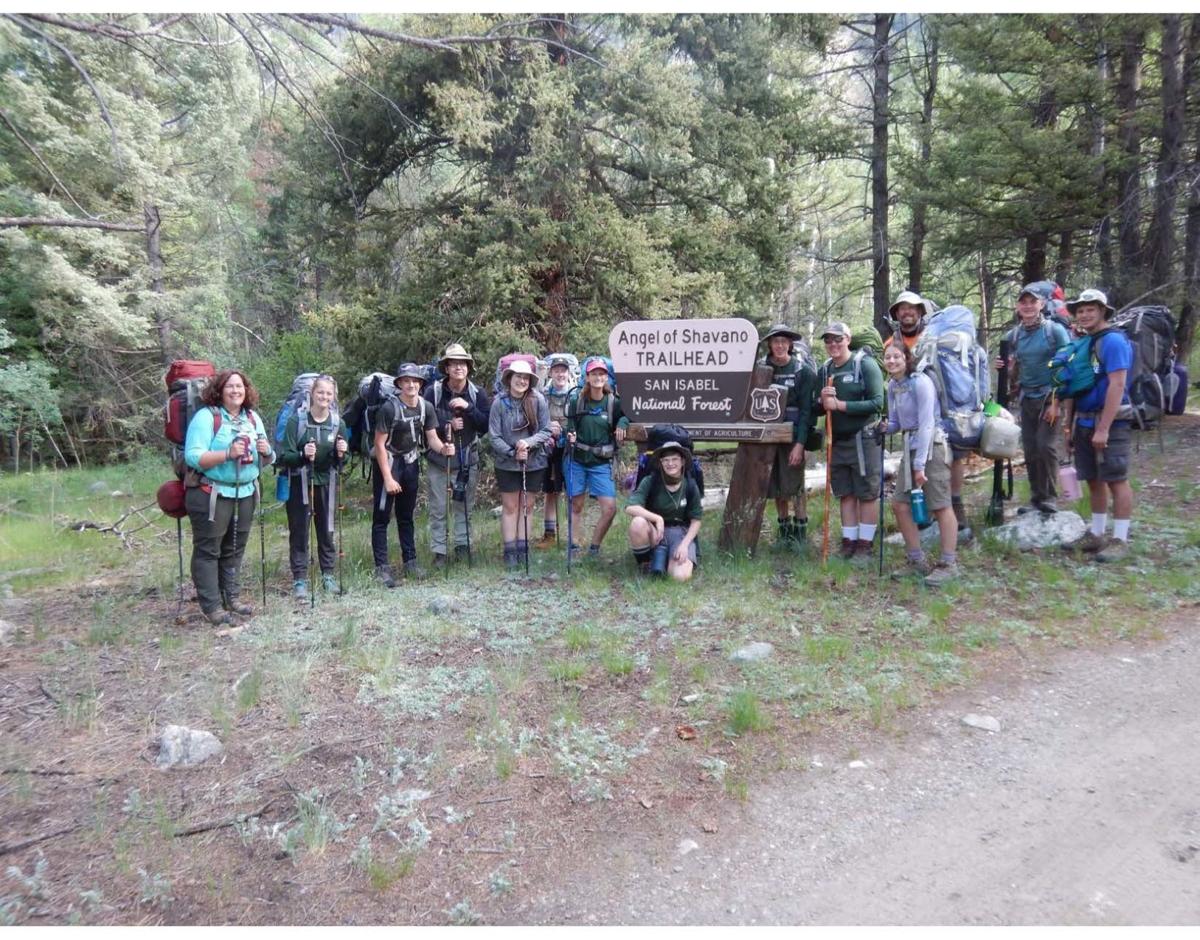 After adjusting to the altitude, the backpacking begins. The group sets off from the Angel of Shavano trailhead.

Bradley Sage stands in the falls.

A group of W-SR rafters hits a wave and gets soak on while whitewater rafting on the Arkansas River.

A refreshing creek is just the fix for a hike in the Great Sand Dunes National Park & Preserve.

Acclimating to altitude brought the Waverly-Shell Rock students to a June snowball fight at 12,000 feet. Left: Bradley Sage stands in the falls.

A mountain picnic lunch for the “Wilderness Family.”

Joey Schmidt poses in the foothills

After adjusting to the altitude, the backpacking begins. The group sets off from the Angel of Shavano trailhead.

 averly-Shell Rock High School students enrolled in Wilderness Studies returned from a 10-day school-sponsored adventure into the Rocky Mountain wilderness with memories, gratitude, new friends of many ages, and well-worn T-shirts reading, “Into the mountains I go to lose my mind and find my soul.”

Canceled last year due to COVID-19, the annual Wilderness Studies experience has been an elective staple of science education at W-SR for about 30 years. Participants begin second semester with group meetings, physical conditioning and instruction in mountain ecosystems, camping etiquette and cookstove operation.

A May weekend of camping and hiking trip in Iowa’s Yellow River State Forest prepared students for what junior Kallee Potratz called, “an unforgettable experience.” For Brody Kuhse, that local experience was essential. “I had only slept in a tent once before and had never hiked or backpacked.”

This is the first time Waverly Newspapers readers can share some their experiences through the eyes of a student each day. Determined and trained, readers can ascend with students to 12,000 feet, thrill to white-water rafting on the Arkansas River and spend quiet moments “unplugged” in contemplation.

Loading two W-SR Suburbans, the crew headed west. Acclimating to the change in elevation, students experienced the mountain’s majesty, The Great Sand Dunes, rafting on the Arkansas River, soaking in a hot springs and a Colorado mountain town before the backpacking began. You’ll notice how food is an important part of each teen’s daily entry!

Day 1 Whitewater Rafting, Marshall Pass, and O’Haver Lake: A day packed to the brim with fun.

We woke at 6 a.m., leaving camp for whitewater rafting. During the drive there, our anticipation grew as we really didn’t know what to expect. Arriving, we got suited up, listened to a safety seminar, and headed to the put-in destination. Amelio, our raft guide reviewed instructions of how to paddle. The first part of the Arkansas River is called the “milk run” since it is very easy and got us used to the paddle commands we’d use later. When Amelio gave us a ‘heads up’ that a set of rapids was coming, we locked our feet and got ready to paddle.

I could see the extreme waves up ahead, so I readjusted my paddle and got ready to hold on. When the second raft went through the rapids, Mr. Schmidt fell off. We crashed through the rapids and the people in the front of the raft pulled him in. We drifted into an eddy to rest and recover.

Exiting the eddy, my side of the raft hit an unexpected bump and the two people in front of me, Brady Abkes and Mr. Schlumbohm went into the water. When we got them into the raft, we held the raft against the rocks and waited to get everyone back into their own rafts. Meeting up with the rest of the group, we found out that Mr. Pogo also fell out. In total, we had four people overboard! We finished the rafting tour with a lot more splashes and fun.

After rafting, we went to Marshall Pass, a beautiful overlook of area mountains and a great view of the valley below. It was high enough in elevation that there was snow, so we couldn’t let that snow go to waste: We had some snowball fights and etched ‘W-SR’ into the snow. Afterwards, we went down to O’ Haver Lake, fished, played card games, and enjoyed the view. The day ended with a nice meal cooked in a foil packet placed in the hot coals. That day was packed to the brim with fun!

Day 2 The Great Sand Dunes and Pizza in Salida

After we were done dune climbing, we messed around in a shallow creek where we created a dam in the water because it sounded like a fun idea. We went back to the Suburbans and ate lunch before travelling to the Salida pool for a swim for and showers. We spent time in downtown Salida and went to Moonlight Pizza for five different kinds of pizza, and a soda made with real sugar cane. After supper, it was back to camp for relaxation and making a small camp fire.

Day 3 A snowball fight in June?

Iowa is only about 1,000 feet above sea level at its highest. Where we hiked on the third day was about 12,000 feet above sea level. The higher you go, the less air there is. This meant less oxygen to breathe. Trust me when I say that at that height you could definitely tell the difference. At the top of the mountain all of us were panting like dogs gasping for air on a hot summer day, except for a select few who are super-human.

On the way up, a group of us found snow. We took that snow and started chucking it at the rest of our group below. Who says you can’t have a snowball fight in June?

Once at the top of the mountain, some of our group went down again to wait. Others went ahead just to see what was there. Mr. “Pogo”and I remained. We just sat in silence and listened to nature. We were left with the quiet part of our wilderness family.

Later that day, Mrs. Borglum’s mom suggested a Mexican restaurant. Most of us ate there while three went to a burger place. The Mexican restaurant was a bit pricey, but the proportions suited the price. I enjoyed my food and an air vent that blew cold air on us the entire time.

This was our first time breaking camp and I think that all together we did really well and left camp by 0830. My amazing car group (Kyeton, Brady, Joey, Jordan, and Brian) said goodbye to several features: the road dropoff that scared Jordan, and the power line we knew as the “kids jungle gym.” This is also when we came up with the best April Fool’s prank: To rip off Barbie doll heads and put them in the ice dispenser.

When we got to the new camp, the girls were at one campsite and the boys and male leaders were in two sites. The sites were a lot closer than before, which was nice in some ways. We went to the Hot Springs which meant more crazy car conversations! We would say things like “When your house is on fire,” or “When you’re drowning,” then chant together, “Drink more water!”

When we got to the Hot Springs, we had to wait because of thunder. While waiting we did a group word search. The natural hot springs were cooler than I imagined. Not that it was cold, but I was expecting hot tub-type temperatures. The bigger one was warm, but the smaller, deeper one was hot. First, we played sharks and minnows. Then we had a splash war, then played chicken, and did finger jousting. We noticed that every time we switched pools the adults would switch to the opposite one. They thought we didn’t notice.

For the second time this trip, we got to shower! On the way back from the hot springs, Pogo drove our car, a new experience for him. We recapped on our earlier discussions about Barbie heads, which became more and more disturbing (We decided none of us should ever be parents). We talked about anti-Smokey (Smokey the Bear’s evil cousin), and bear sleeping bags. At one point Pogo told us to “stop talking about shooting things.”

After dinner we had s’mores! It sounds kind of basic by itself, but when you are with a Wilderness Family nothing is basic. Some kids earned extra s’mores with piggy back rides and singing loudly. An awesome day ended with a Pow-wow, talking about the next day’s hike.

Rising at 6:00 a.m. we cooked breakfast and broke camp. This was to be our first day of backpacking together. We began hiking at 8:00 a.m. Starting at 6,000 ft., it was cold at the start of the hike. The sun broke over the mountains and warmed us up.

Nicole lead us to the top of the first hard climb as we powered through the up-grades. We saw a lot of dog walkers and other day hikers. There was a lot to see, like the Long Mountain meadow, streams, and beautiful views while listening to different conversations along the way. The mountain bikers who passed us would say “Just another ½ mile left.” Either their calculations were a bit off, or they were just encouraging us to keep going.

We stopped at a stream for lunch and filtered water to drink. The heat of the day made us thirstier and we were working harder. As we filtered water we’d fill a bag called a dromedary bag. At its bottom there is a mesh screen that can catch sticks and large debris. There is a filter connected to the bag that runs through it. The water becomes drinkable after it removes harmful bacteria and viruses.

Even though one of my goals was to see a bear, I didn’t see any throughout our journey. Arriving at camp, the first thing we did was fill drinking water containers and set up our tents. For supper, we made freeze-dried meals. I had a freeze-dried breakfast skillet, and it was really good. Then as everyone finished eating, we prepared the bear canisters and bear bags to be stored 200 feet from camp to keep animals away from us overnight. We went to bed for the night knowing that we had to get up early and pack up.

During the night, it would cool down into the low 40s. To keep me warm, I had a sleeping bag rated at 20 degrees and a sleeping bag liner. I learned in Scouting to put my clothing at the bottom of my sleeping bag to keep it warm for the morning.

The journey continues in Tuesday’s edition with the last five days of the trip.

Partly cloudy. A stray shower or thunderstorm is possible. Low 73F. Winds S at 5 to 10 mph.