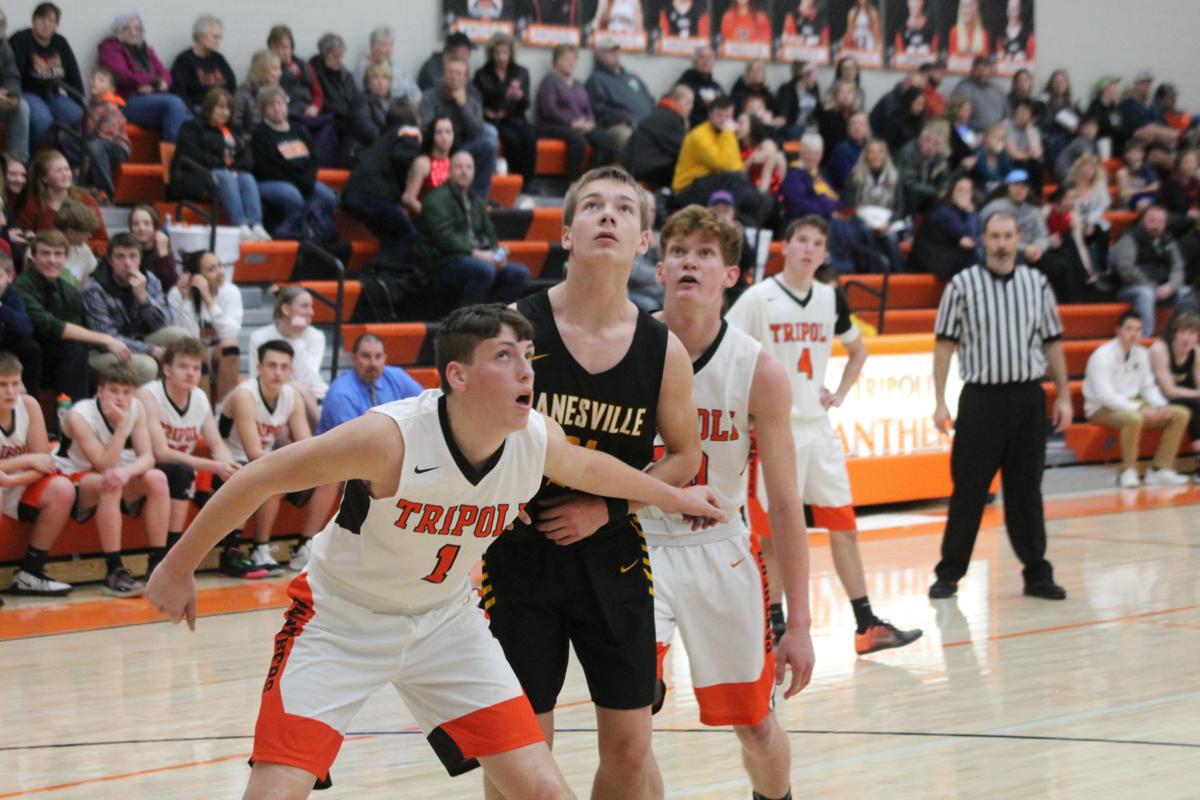 Senior Seth Boeckmann (1), sophomore Jared Hoodjer (in black) and junior Conner Piehl contend for a rebound during Janesville’s win over the Panthers on Tuesday in Tripoli. 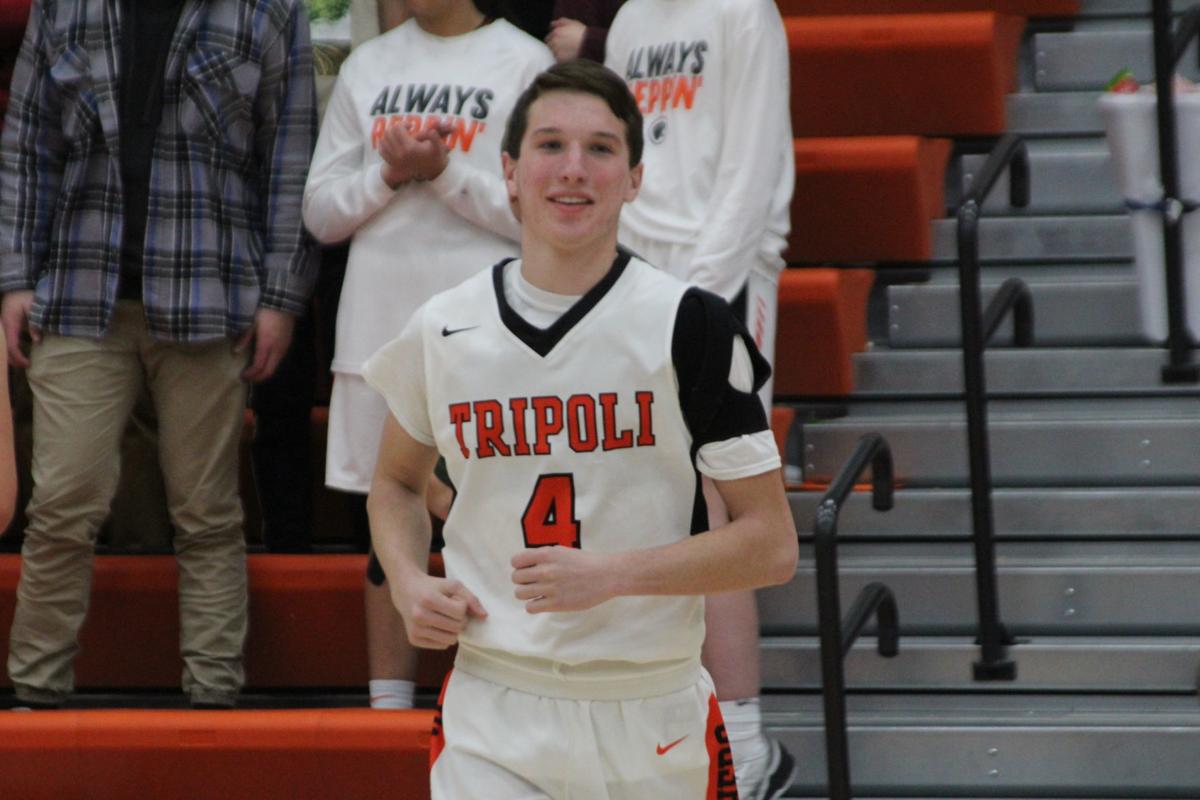 Senior Lincoln Drewis is introduced before Tripoli's loss to Janesville on Tuesday night in Tripoli. 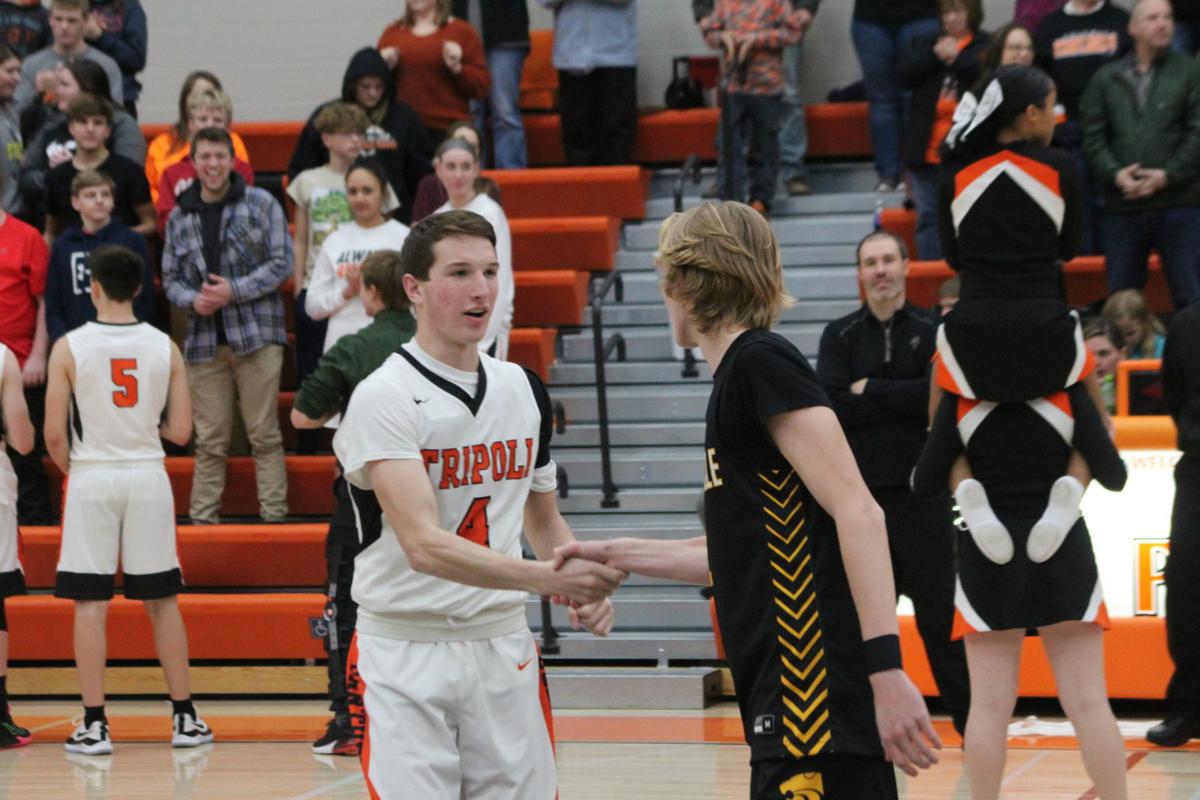 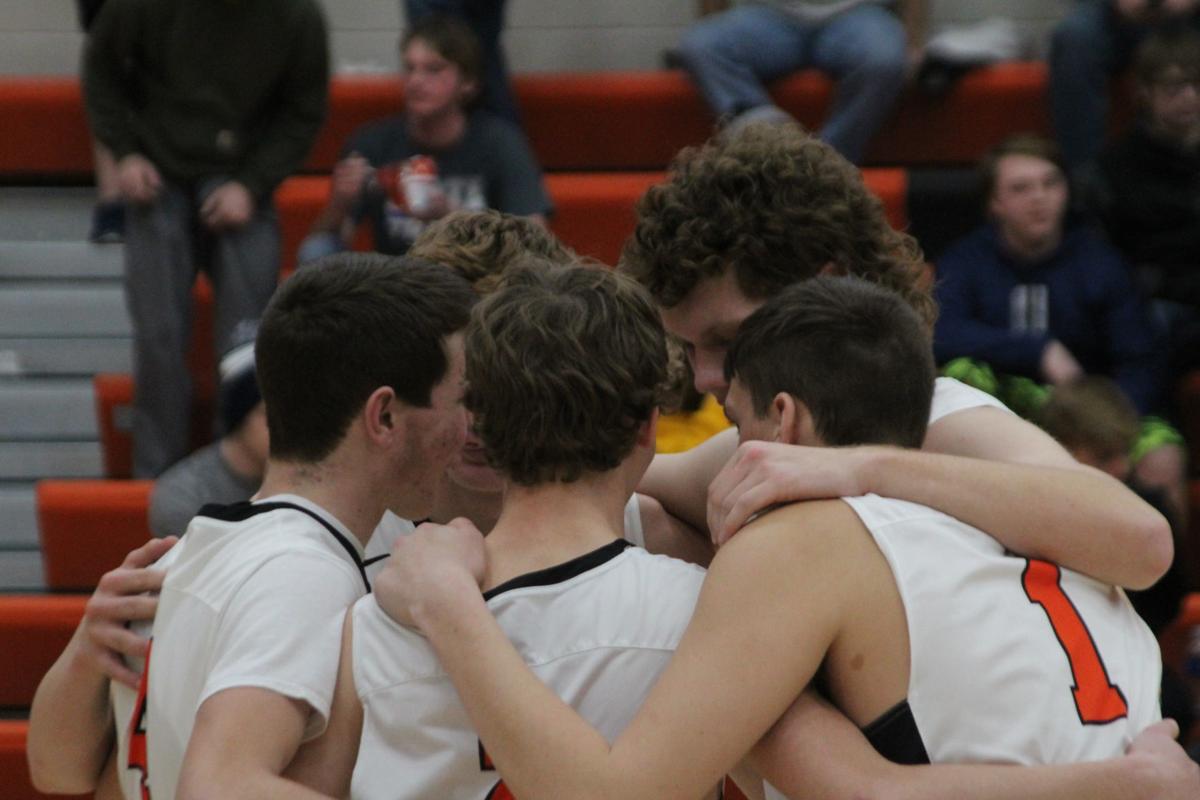 The Tripoli boys basketball team huddles before its loss to Janesville on Tuesday night in Tripoli. 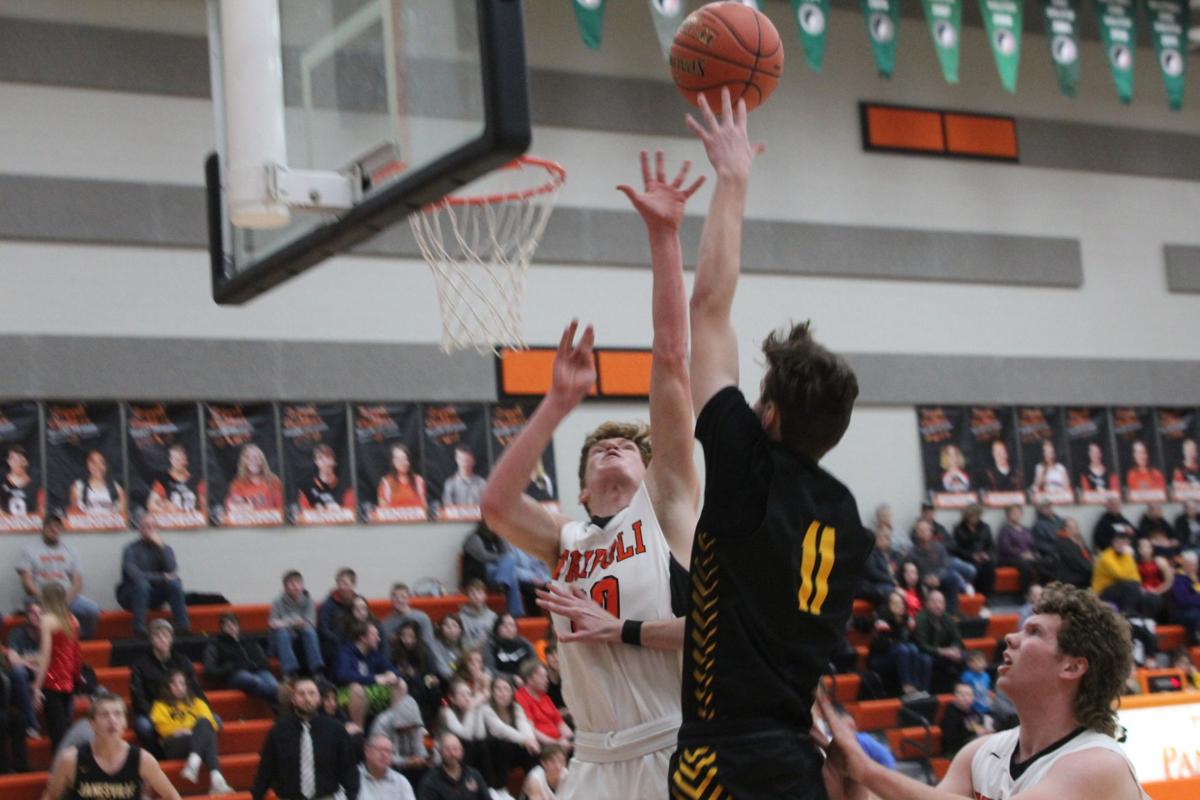 Freshman Rogan Gergen attempts a shot over Tripoli junior Conner Piehl during Janesville’s win over the Panthers on Tuesday night in Tripoli. 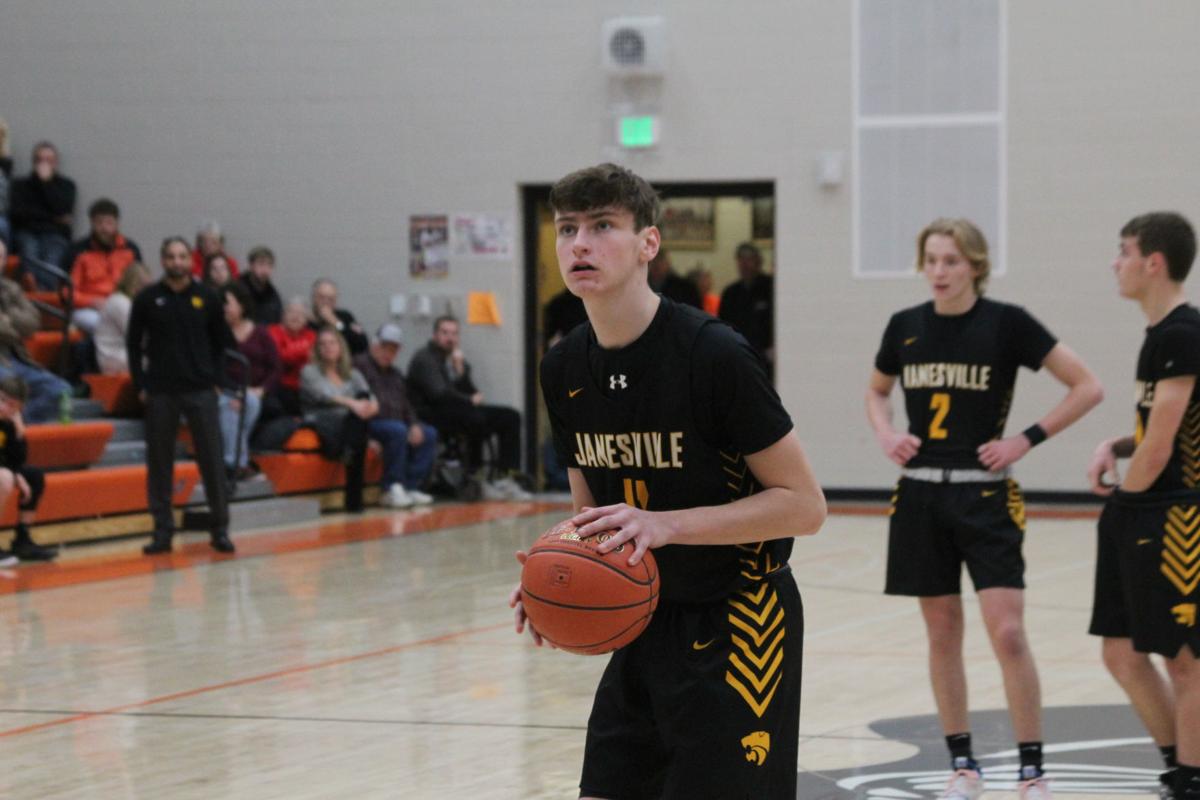 Freshman Rogan Gergen gets ready to shoot a free throw during Janesville's win over Tripoli on Tuesday in Tripoli.

Senior Seth Boeckmann (1), sophomore Jared Hoodjer (in black) and junior Conner Piehl contend for a rebound during Janesville’s win over the Panthers on Tuesday in Tripoli.

Senior Lincoln Drewis is introduced before Tripoli's loss to Janesville on Tuesday night in Tripoli.

The Tripoli boys basketball team huddles before its loss to Janesville on Tuesday night in Tripoli.

Freshman Rogan Gergen attempts a shot over Tripoli junior Conner Piehl during Janesville’s win over the Panthers on Tuesday night in Tripoli.

Freshman Rogan Gergen gets ready to shoot a free throw during Janesville's win over Tripoli on Tuesday in Tripoli.

Kobe Bryant famously once said he preferred winning NBA championships on the road, as opposed to at home. He loved beating teams on their own courts and seeing the disappointed faces of the home fans.

Janesville boys basketball coach Joseph McKenna has something in common with the Los Angeles Lakers legend, then.

After beating the rival Tripoli 58-50 in an Iowa Star Conference matchup on Tuesday night in Tripoli, McKenna had a big smile on his face and did nothing to hide his satisfaction.

"I love playing on the road. It’s my favorite," McKenna said after the win. "I like the black jerseys. I like coming into other people’s houses and not backing down. There’s something about getting that road win that’s sweeter than home victories, because it’s nice to get a win on someone else’s floor."

What makes Tuesday's win — which pushed the Wildcats to 4-0 on the year — even better for Janesville is that these two teams have a certain history.

Two seasons ago, the end of Janesville's season came at the hands of the Panthers. And back on Oct. 4, the Wildcats football team was throttled by Tripoli, 52-21.

So when sophomore Leo Dodd was asked after the game whether the win feels a little sweeter considering the context, his mouth curled up in smile and he didn't mince words:

The game was chippy throughout and, especially in the fourth quarter, the players frequently exchanged words and gesticulated at one another other after making shots.

It was clear both teams badly wanted to get the rivalry win and also sprinkle some salt in the wound.

"It kind of transfers over from football with how that game ended and how that game went," Dodd said. "We just wanted to get these guys."

The loss drops Tripoli to 1-2 on the year, and the Panthers have now lost two straight after losing 62-38 to Don Bosco last Friday.

Janesville's 58-point outing looks more impressive when you factor in the team was without its best player.

After starting in all three games to begin the season, Wiley Sherburne did not play Tuesday night due to an illness. So Janesville was without the 21 points per game and top-notch rebounding from the sophomore.

But it was hard to notice his absence with the way the other Wildcats picked up the slack, most notably Jared Hoodjer.

The sophomore Hoodjer nailed his first two 3-point attempts out of the gate to help the Wildcats to a 11-5 lead, and he hit four treys from deep in the evening.

"What we do pretty well that a lot of teams don’t know is we shoot the ball pretty well," McKenna said. "We have guys that can knock down some shots. Jared was definitely doing that. He had been struggling the first few games, but he’s somebody that in practice knocks them down."

Janesville used the "next man up" philosophy to a T on Tuesday night.

The Wildcats didn't change their offensive game plan with their best scorer sidelined.

"Nothing really changed offensively," McKenna said. "Wiley kind of just gets fed. Today it was more of a group effort. We hit some 3s. It’s really about getting better at this point."

McKenna and Co. are happy the team is 4-0 to begin the season, make no mistake.

But with the season not even 20% through, there are still squeaky wheels that need some grease. Namely, the defense.

"We were atrocious defensively in the first half, I thought," McKenna said. "We were letting smaller guys post us up. We didn’t close out well.

"We were allowing dribble penetration, and against a team as quick as Tripoli ... I mean (Conner) Piehl and (Lincoln) Drewis do an excellent job. We had trouble keeping them out of the lane in the first half."

"We didn’t play the best, but pulling it out was good," Dodd said. "Staying on top of the conference is a good feeling."

Next up, Janesville will host Waterloo Christian (2-0) on Friday night. Meanwhile, the Panthers will look to bounce back when it heads to Dunkerton (1-2) on Friday.