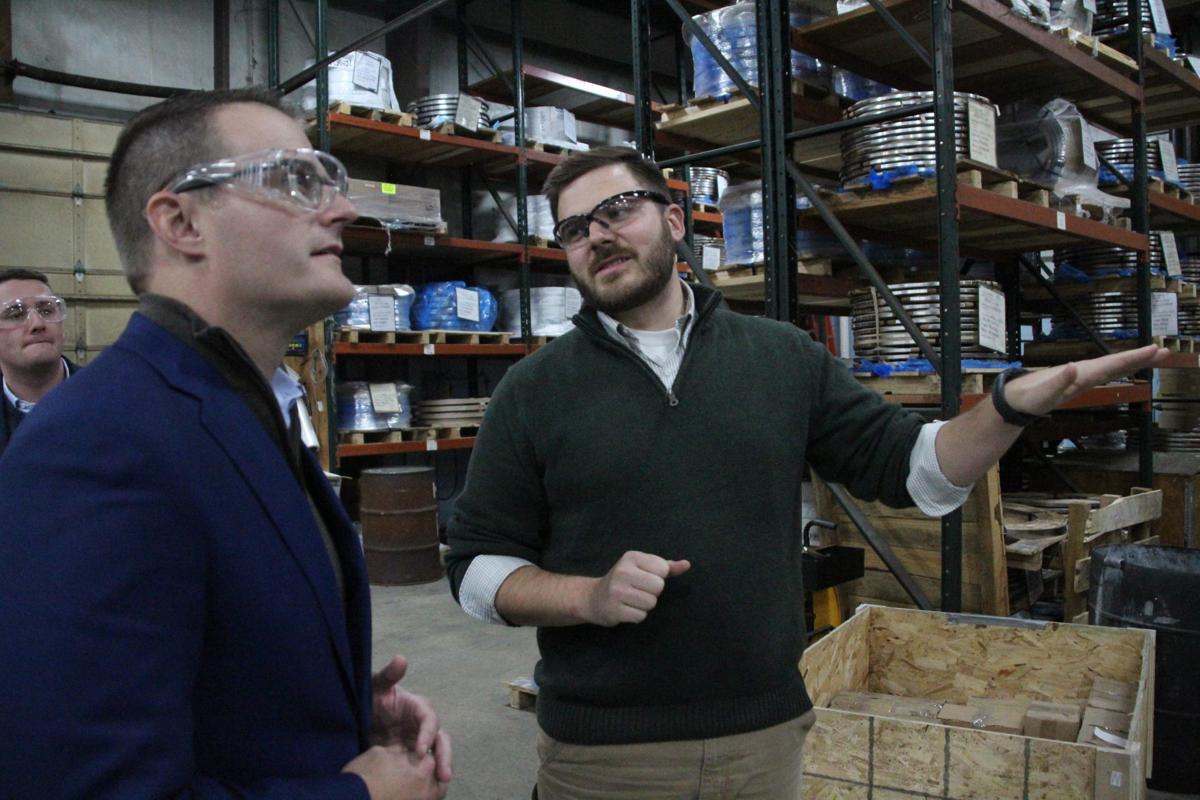 Phil Jones, then the Rada Manufacturing vice president and general manager, shows Lt. Gov. Adam Gregg around the plant on Nov. 12. Jones was recently promoted to president of the company.

A familiar face in the leadership of a local manufacturing company is now at the helm.

Phil Jones, who first made his mark on Waverly’s business climate, among other areas, during his three-year stint as the town’s city administrator, is the new president of Rada Manufacturing Company.

Gary Nelson, who served in that capacity before, will remain as the chairman and CEO.

“Phil, since joining our company, has had a growing understanding and appreciation of the Rada Mfg. mission as it relates to our customers, our staff and our community,” Nelson said in a statement making the announcement. “He continues to display the characteristics that we desire to help lead us as we navigate the challenges of this ever-changing environment that we live in, both as a manufacturer and a distributor of consumer goods.”

Jones said promoting him to the president’s chair had been in the company’s long-term plans, but the timing caught him off guard a bit.

“It came out of the blue,” he said, adding that he learned about it during a regular weekly briefing.

Nelson felt that the significant economic, business, cultural and public health challenges society is going through in 2020, including those imposed on the world by the coronavirus, demand Jones’ skills and leadership for the kitchen cutlery manufacturing company.

“The vision is to continue on with the successful nature of the company being rooted in Waverly, providing a place for stable employment with good jobs and making a product that people love, that helps fundraisers, independent business people who sell our product in their stores and people who love cooking at home or passing our knives to the next generation,” Jones said.

Jones returned to Iowa in 2012 from Westminster, Colorado, where he worked as the utility operations manager, to take the post of Waverly’s city administrator.

While working at Rada for the past couple of years, Jones has led the implementation of significant changes that build onto the company’s past success.

He said Rada’s commitment to American-made products is a long-standing, foundational principle, which was at odds with industry trends to outsource production and assembly of manufacturing products overseas.

“We have been so proud for 72 years to be American-sourced and American made — we see the benefits that it has not only for the customers, for the employees, the communities they live in, for the communities we give back to, and our owners are committed to having long-term strong jobs here and not chasing cheap labor around the globe,” he said.

Jones and his wife, Erin, have four kids.

“It is an honor to lead this home-grown company,” Jones said. “We will continue to build for today and for tomorrow.”