You are the owner of this article.
Edit Article Add New Article
You have permission to edit this article.
Edit
Welcome, Guest
Home
COVID-19
News
Sports
Opinion
Obits
Lifestyle
Multimedia
Classifieds
Marketplace
Share This
1 of 7 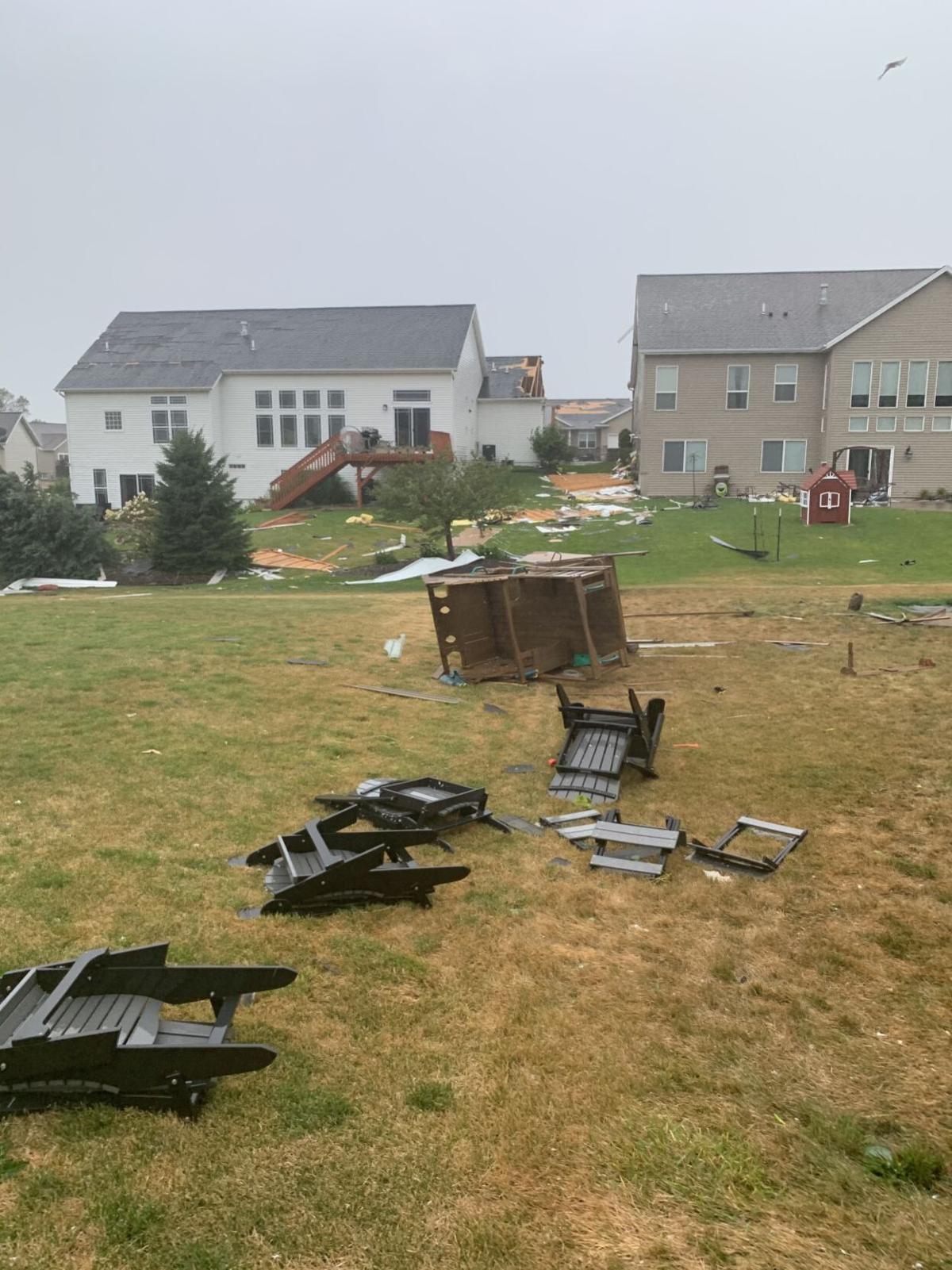 Chairs and a play set are strewn through the Daley back yard at their northwest Cedar Rapids home Monday. 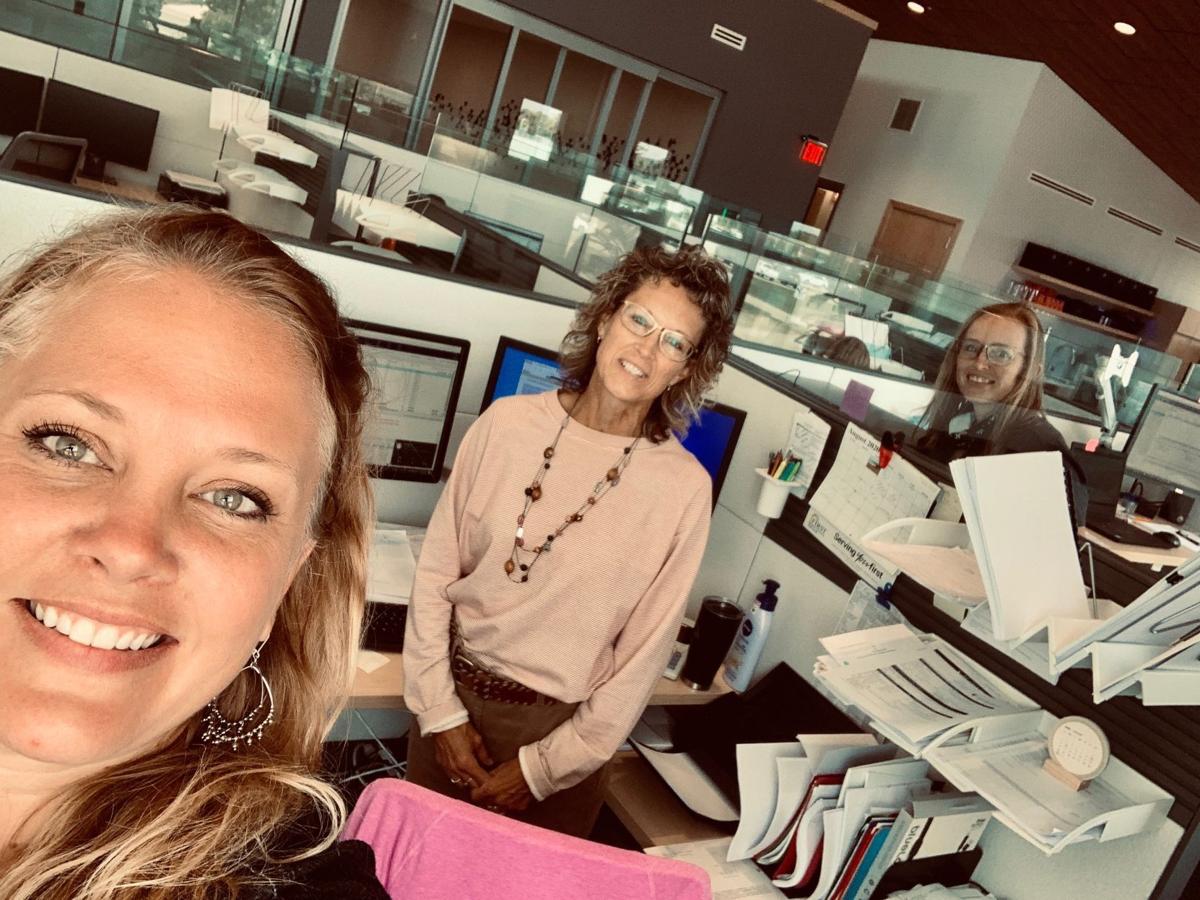 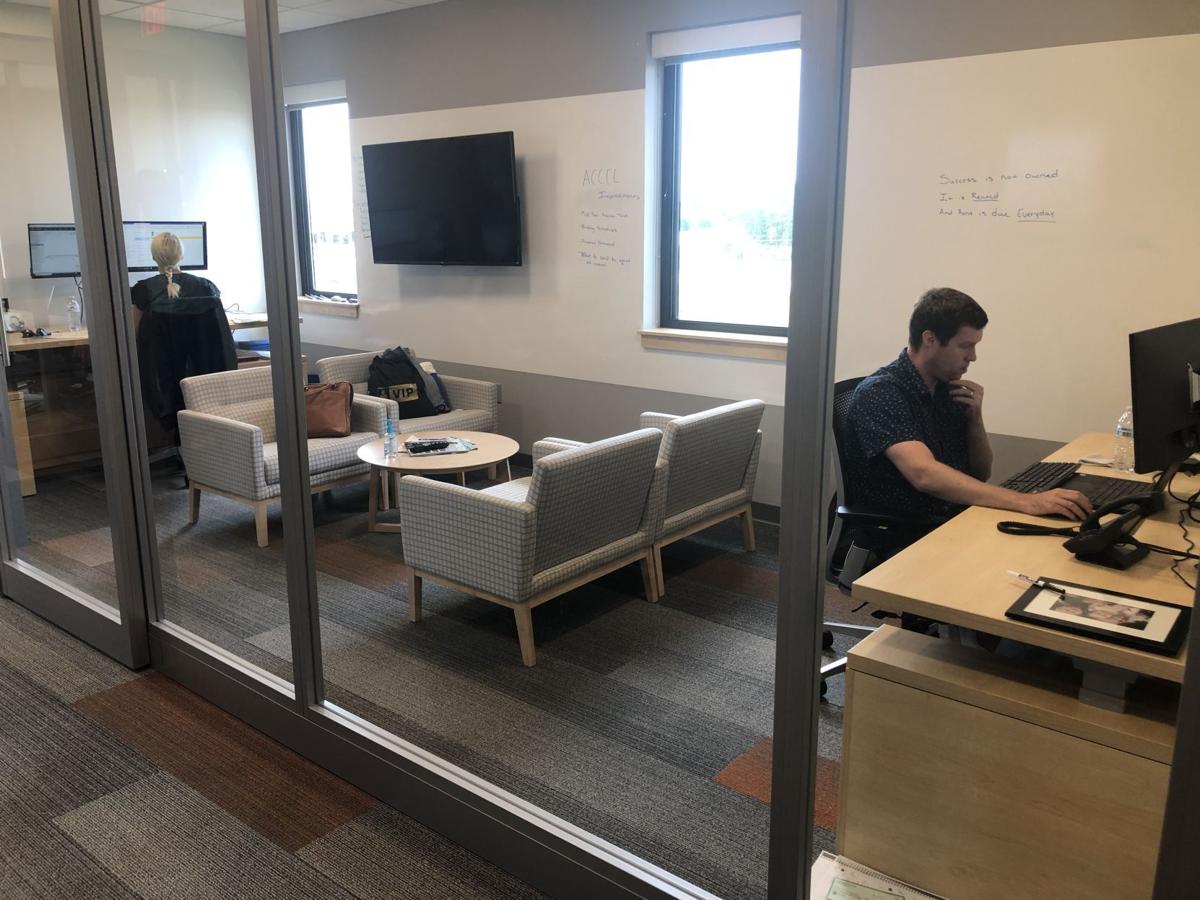 The “fish bowl” has become a command center for claims at The Accel Group following Monday’s derecho. 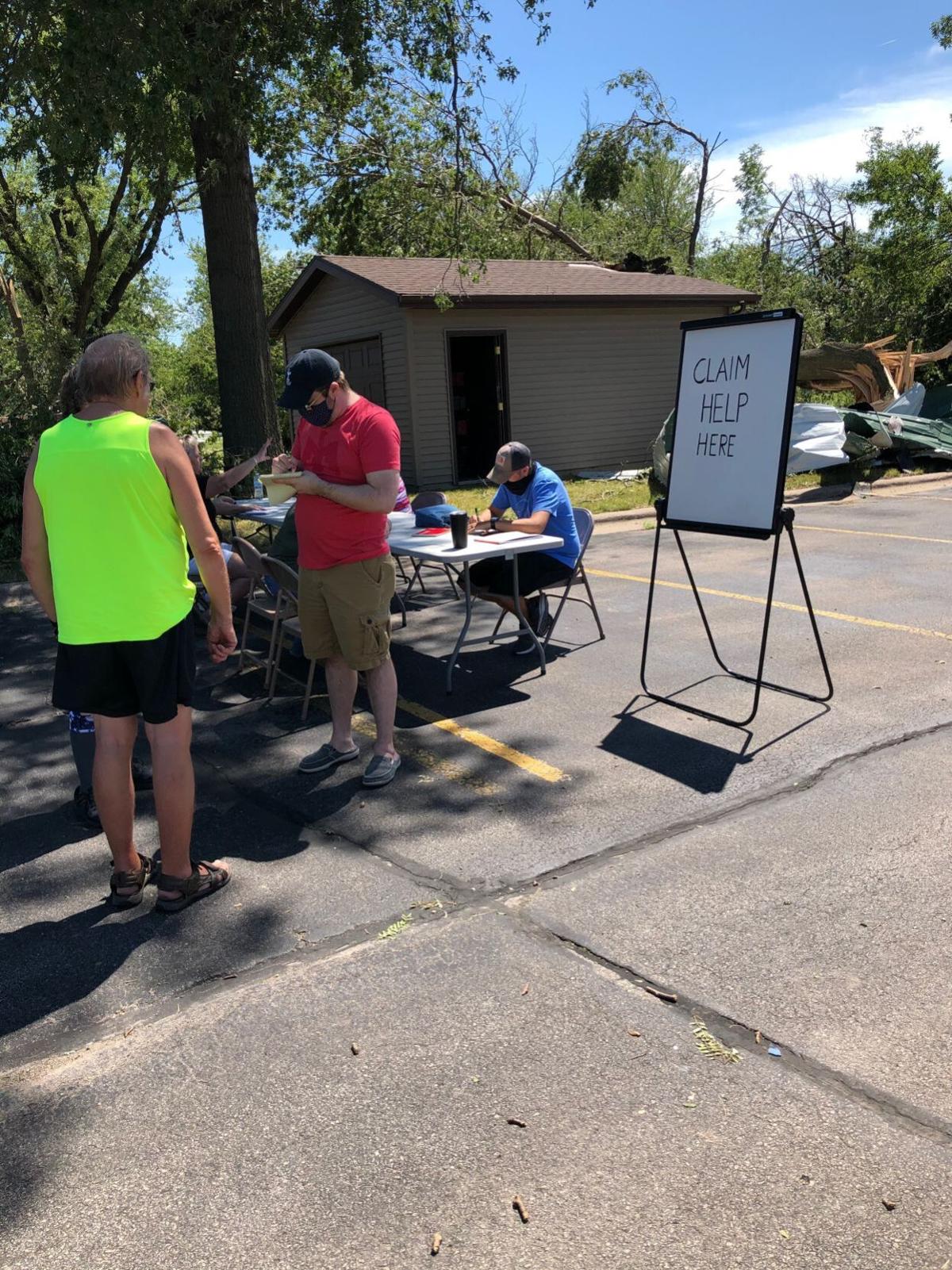 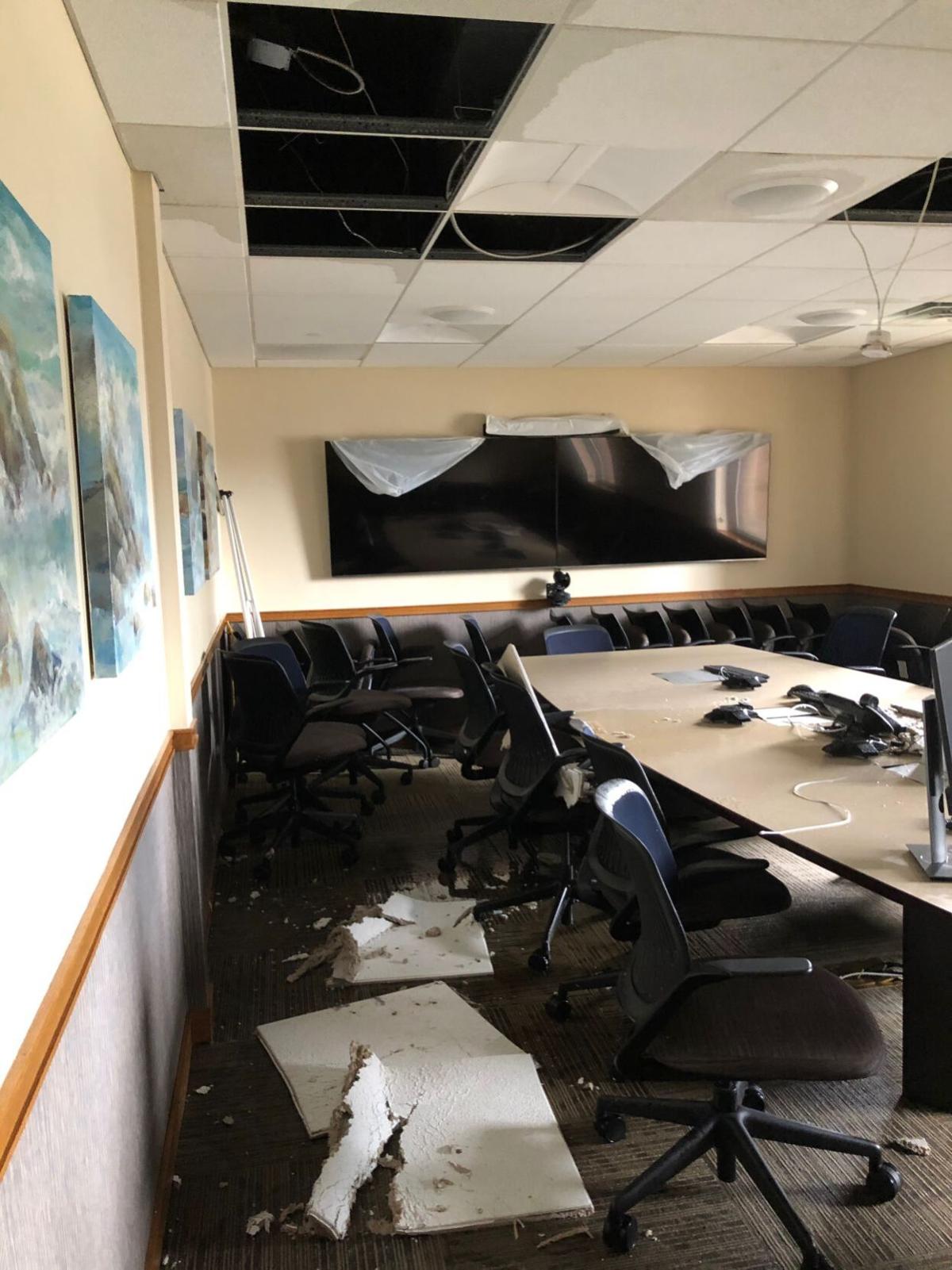 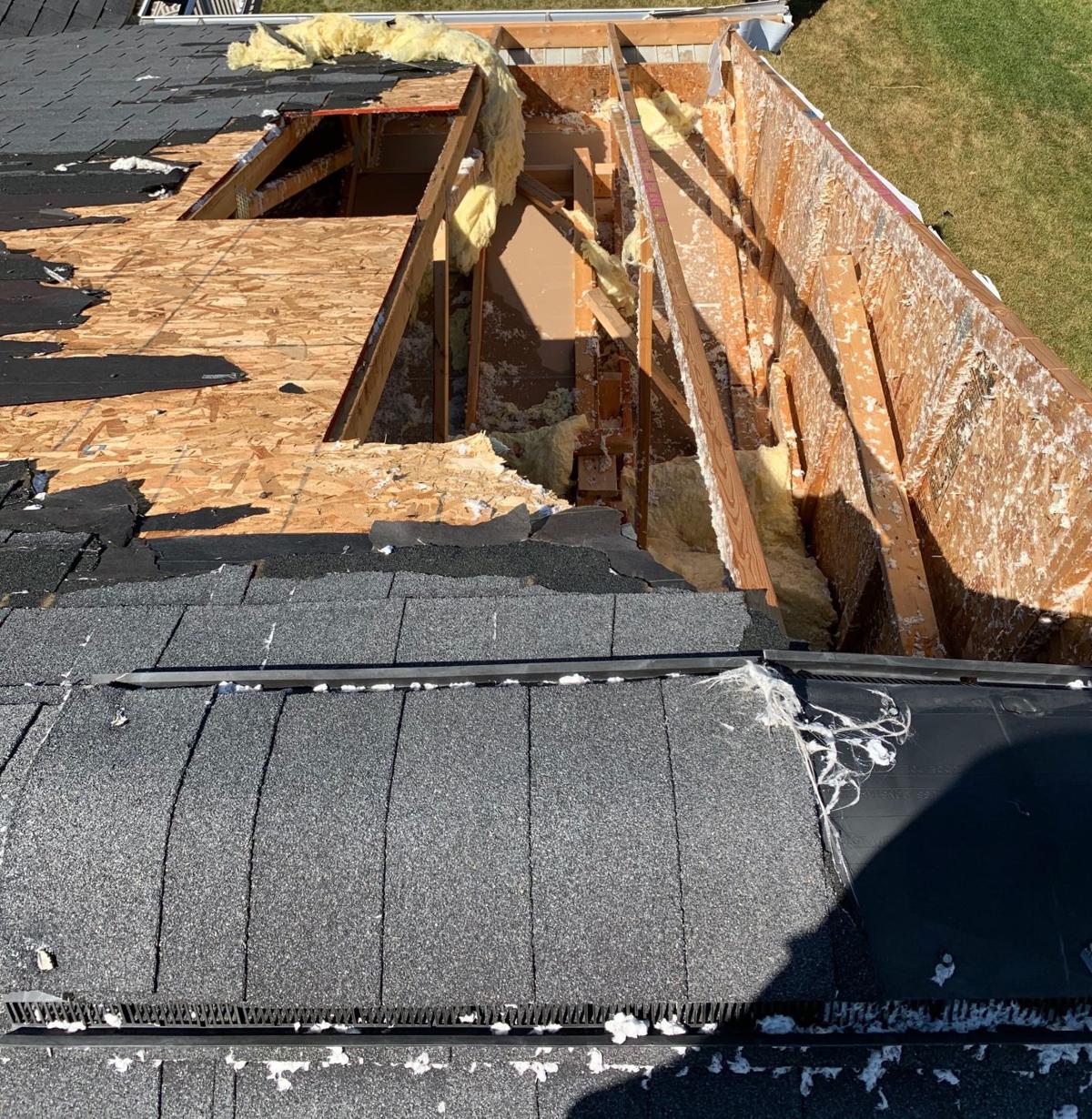 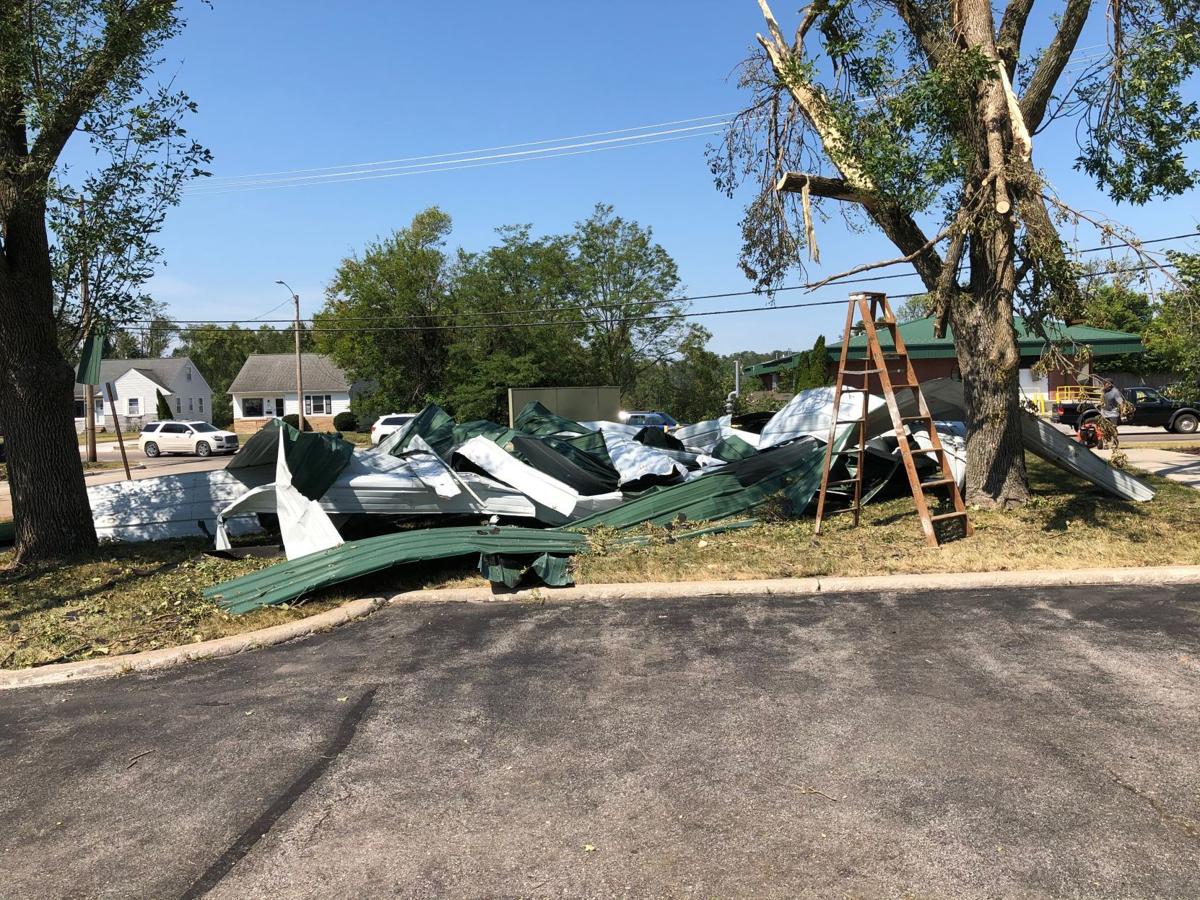 Chairs and a play set are strewn through the Daley back yard at their northwest Cedar Rapids home Monday.

The “fish bowl” has become a command center for claims at The Accel Group following Monday’s derecho.

Cassie Daley, an account manager for The Accel Group, had just made her lunch at the office on Monday when she and a co-worker heard the sirens go off.

The Waukon native, who had worked for the insurance company since 2007, knew it was not unusual to hear the sirens as bad weather approached in Cedar Rapids, so keeping an eye on the window, she sat down at her desk.

Cassie was among a handful of agents who worked in the office that day, as the coronavirus pandemic had restricted the number of staffers at one time.

But in fairly short order, as torrential rain started pounding the roof of the one-level office building, and colleagues wowed in disbelief when they saw the tin roof of the Family Dollar store across the street wrap itself, in sections, around the cars in the Accel parking lot, Cassie realized this was not just a another storm.

It was a derecho, she later found out.

But before she learned what the Spanish term means, she witnessed what a derecho can do — flatten homes, rip up deeply rooted trees, tear down buildings, damage cell phone towers, knock out power, and even take a life.

That’s what the 2020 derecho did on Aug. 10, wreaking havoc south of U.S. Highway 20 just after the noon hour, stretching from southeastern South Dakota to western Ohio, a territory of over 770 miles in which the storm unleashed its fury, with winds up to 112 mph, causing incalculable damage.

As Cassie and her co-workers watched the devastation outside, they turned to action to mitigate the damage as fast as they could while the storm raged. They pushed laptops and family photos out of harm’s way and huddled in the office until they started smelling gas coming from the lines in the parking lot.

At this point they ran to the parking lot, carpooled in vehicles that had been spared by the brunt of the storm, and headed out to the Hy-Vee parking lot nearby. They were grateful that by that time, the the rain had subsided.

Eventually, Cassie got home where another picture of destruction awaited her.

“It was a nightmare to pull into,” she said.

The house roof had been ripped off, especially over the master bedroom. Without further ado, she started helping her husband and kids, who had just emerged out of their safe space under the staircase. As a team, put in buckets and plastic containers to stem the damage from the water from permeating into the floors.

It was hectic, so Cassie lost her sense of time. Her three daughters, aged 8, 4, and 1, were understandably scared and distraught, especially after they saw the neighborhood. They had been in the safe space in the house in prior storms, but had never really seen anything like that.

“Everyone was safe so that was the best part,” she said with audible relief.

The houses around them looked in similar shape, so Cassie and her family offered whatever comfort and help they could to their neighbors.

Meanwhile, after sending her daughters to her parents’ house, Cassie shelved away her personal circumstances and started focusing on her job — to help her customers, who were all in similar situations, with their claims.

The storm had cut off the internet and cell phone services, so she could not do much to help right away.

But on Wednesday morning, she showed up at the Waverly headquarters, where she, along with other affected colleagues, could work using her laptop and a hot spot, and help her clients with their predicament.

Thankfully, the agency’s offices in Des Moines and Coralville were not damaged.

The last derecho that ripped through the state happened on July 11, 2011.

It started north of Des Moines, ripped through Vinton and Garrison, damaging the Iowa Braille and Sight Saving School, among many other buildings in the area, and leaving a permanent scar on the psyche of the town.

But the 2020 Midwest derecho came on top of the coronavirus pandemic, which had already taken a toll on the social fabric of the world.

Dealing with a natural disaster in pandemic times takes stamina, said Ty Burke, a partner with The Accel Group.

“This is the most significant storm we have seen,” he said.

But dealing with both and putting them aside in order to help others takes a special dedication, added his colleague, Tony Pollastrini.

Since the storm, and the partial restoration of services in the state, claims have started pouring into the insurance office at the speed of hundreds per hour.

Which brings us back to the origins of “derecho” in modern meteorology.

The term was coined in 1888 by University of Iowa professor Gustavus Hinrichs, who in 1875 became a charter member of the Iowa Academy of Science, and founded and directed the first weather service in the state that same year, according to his bio on the Storm Prediction Center, a research agency which is part of the National Weather Service (NWS) and the National Centers for Environmental Prediction.

Regardless of its strength, however, the 2020 derecho, like any natural disaster, can never crush the human spirit, which puts everyone back on their feet after nature strikes.

The storm only tests the spirit.

At The Accel Group now, the “fish bowl,” a joint office with glass walls shared by Pollastrini and Burke, has now become the command center for claims processing.

And Burke, a man of faith, says that answering the call to help others in their time of need is exactly the reason why The Accel Group exists.

“For a team like ours, this will give us the ability to deliver on our promise,” he said. “It is pretty cool to see the helpers who raise their hands and say let’s do this together.”

Some sun this morning with increasing clouds this afternoon. High around 85F. Winds SSW at 15 to 25 mph.

Cloudy skies. A stray shower or thunderstorm is possible. High 69F. Winds W at 10 to 15 mph.