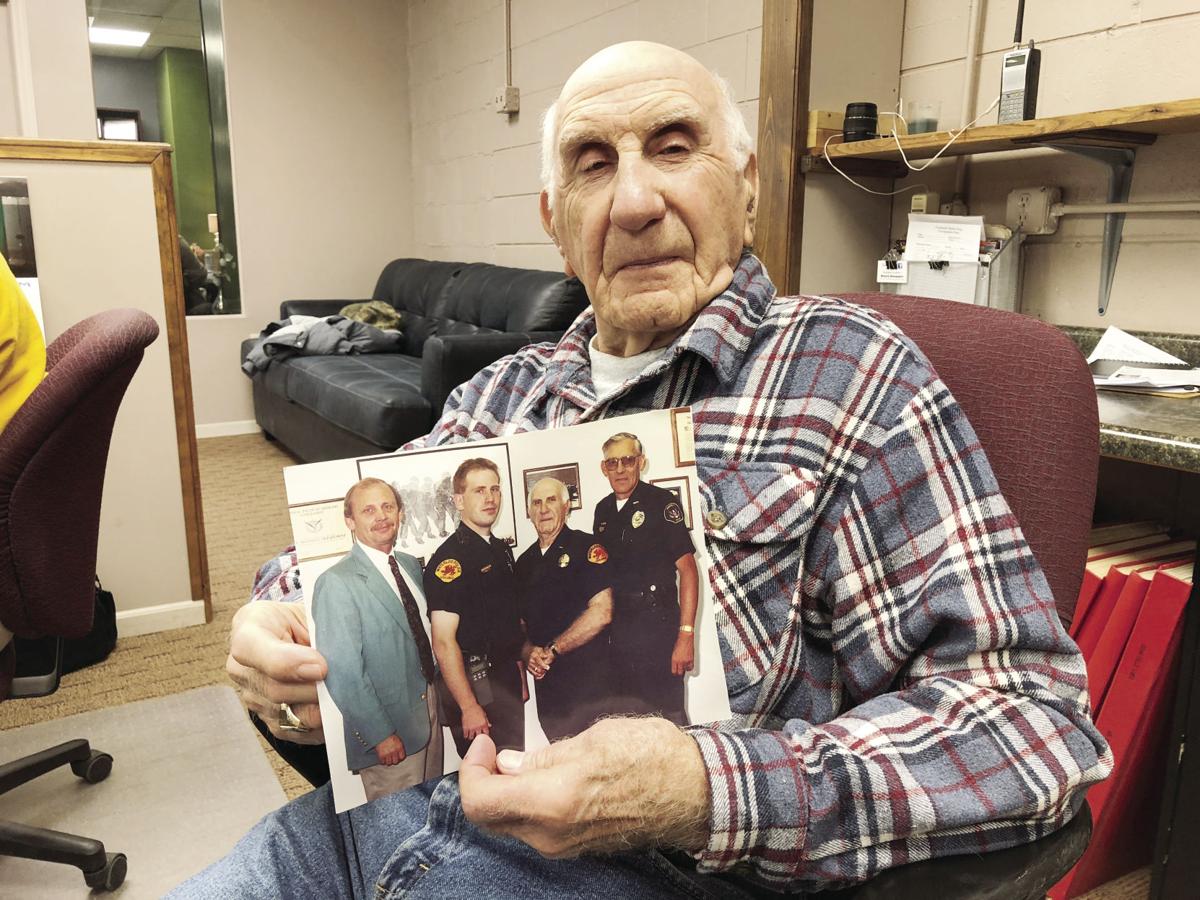 Robert Greenlee Jr. holds a photo taken of him, second from right, with his nephew, Richard, son, Robert III, and brother, Jerry Lee, when Robert III joined him on the Waterloo Police Department. Richard was a Bremer County chief deputy and the late Jerry Lee retired as the assistant police chief in Waverly. 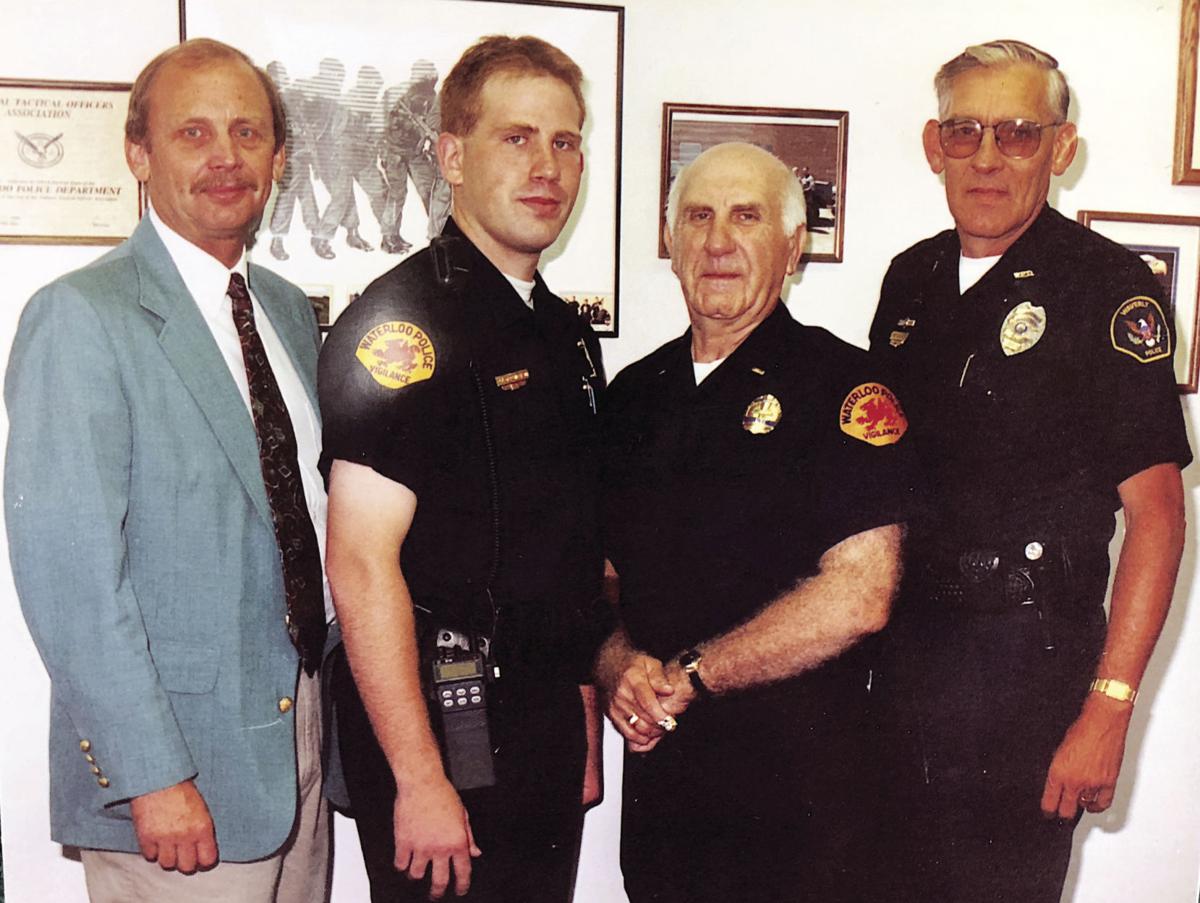 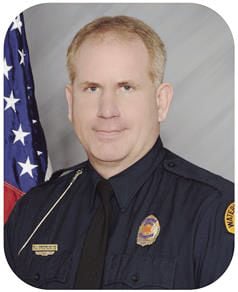 Robert Greenlee Jr. holds a photo taken of him, second from right, with his nephew, Richard, son, Robert III, and brother, Jerry Lee, when Robert III joined him on the Waterloo Police Department. Richard was a Bremer County chief deputy and the late Jerry Lee retired as the assistant police chief in Waverly.

He wanted to lead a life that made a difference.

Be a good son, a great father and a devoted husband.

Waterloo Police Sgt. Robert Jackson Greenlee III did all that and more in his 45 years on earth.

When he died unexpectedly in his home on Sunday, April 15, the shock of his untimely passing reverberated through the community, leaving family, friends and colleagues in deep mourning.

But what also became clear in short order as grief descended on those who knew and loved him, is that what Sgt. Greenlee III had left behind was exactly what he wanted his life to be about.

Above all, he lived the family legacy as a man of duty and dignity.

With so many of his role models and family members before him wearing the badge, it may have seemed obvious to some that the only son of Robert J. Jr. and Sharane Kelm Greenlee, of Shell Rock, would pick the path of public service as his career.

His uncle, the late Jerry Lee Greenlee, joined the Waverly Police Department in 1980, and retired as the assistant police chief after 27 years of service.

His cousin, Richard Greenlee, was the chief deputy of Bremer County Sheriff’s Office for many years.

But as a young man, Greenlee III seemed to plot a different path for himself. He had graduated from Cedar Falls High School in 1990, where he played baseball for the Tigers, who went to state two years in a row.

In his freshman year at the University of Northern Iowa, he appeared to favor accounting.

But it did not take him long to realize that he wanted more out of life than balancing ledgers and filling out spreadsheets.

“I want to be in law enforcement,” Greenlee III eventually told his dad.

His parents supported him in all his endeavors, but ultimately, it was his call.

After taking courses in criminology in college, he applied to several police departments in the area, and when the Waterloo Police Department invited him for an interview, the young man was delighted.

“I let him be what he wanted to be,” his father said. “I never would have believed that he would actually go in the police department in Waterloo because I was there.”

On June 18, 1994, the same year he graduated from the Police Academy in Des Moines, Greenlee III married Melanie (McIntyre) of Reinbeck, at the United Church of Christ in Cedar Falls. They have two sons, Robert IV, and Jerran.

For two years, the father-and-son duo of Greenlees served on the Waterloo Police Department — the veteran at the tail end of his career, and the newly minted police officer at the start of his, but never on the same shift.

Greenlee Jr. was especially fulfilled that his son had accomplished everything on his own merit.

“I was proud of him as could be that he wanted to follow in my footsteps,” he told Waverly Newspapers. “I was proud that he felt that I was doing what was right and he wanted to do the same.”

In his 24 years on the department, Greenlee III did many jobs, serving as a traffic enforcement officer, school liaison officer, teacher at the academy and in the department, and a public relations officer. In August of 2005, he was promoted to sergeant.

“He just loved his job,” his father said. “He dedicated his whole life to it.”

Outside of work, Sgt. Greenlee III loved to go to sports events with his sons, his wife and his parents. He also rode his Harley. His admiration for cars and his interest in engaging the community led him to play an integral part in organizing two staple area events — the Fourth Street Cruise in Waterloo and the University Avenue Cruise — which feature classic cars.

He coached baseball for Waterloo East High, and even continued to play the game with friends.

The weekend prior to his death, Sgt. Greenlee III spent time with his parents in Shell Rock, chatting about their summer plans.

“We talked about going to a ball game…” his dad said, tearing up.

Even though it is well known that a police officer’s job is stressful, Greenlee III somehow always found ways to handle it, his father added.

“It’s just the way life of a police officer goes,” he said.

By all accounts, the legacy Sgt. Greenlee III has left behind is well secured and enduring.

Capt. Jason Leonard, of the Waverly Police Department, said Sgt. Greenlee III impacted a lot of students in his role as a school resource officer.

“It takes the right kind of person to do that job for as long as he did,” he said.

“Rob was one of those officers that everybody enjoyed being around,” he said. “He had a lot of stories. He knew his topics.”

Both Eggleston and Leonard, who are in the same age bracket as Sgt. Greenlee III, said they were in disbelief when they learned of their colleague’s passing.

“It’s always a surprise when one of your peers goes down,” Leonard said. “It’s a reminder to make you take a hard look at what you do and how long you do it for.”

“It’s an absolute loss for the community and for the department. I can’t imagine what his family is going through. Everyone’s going to feel that loss.”

Greenlee Jr. said his family is overwhelmed by the love and support they have received from the law enforcement community and the general public.

“The support is just great, it makes you feel that he was appreciated,” he said. “I hope that he was a fair, honest and energetic and respected policeman and by the grace of God, there go I.”

Some clouds. A stray shower or thunderstorm is possible. Low around 55F. Winds NNW at 10 to 15 mph.

Some clouds. A stray shower or thunderstorm is possible. Low around 55F. Winds NNW at 10 to 15 mph.