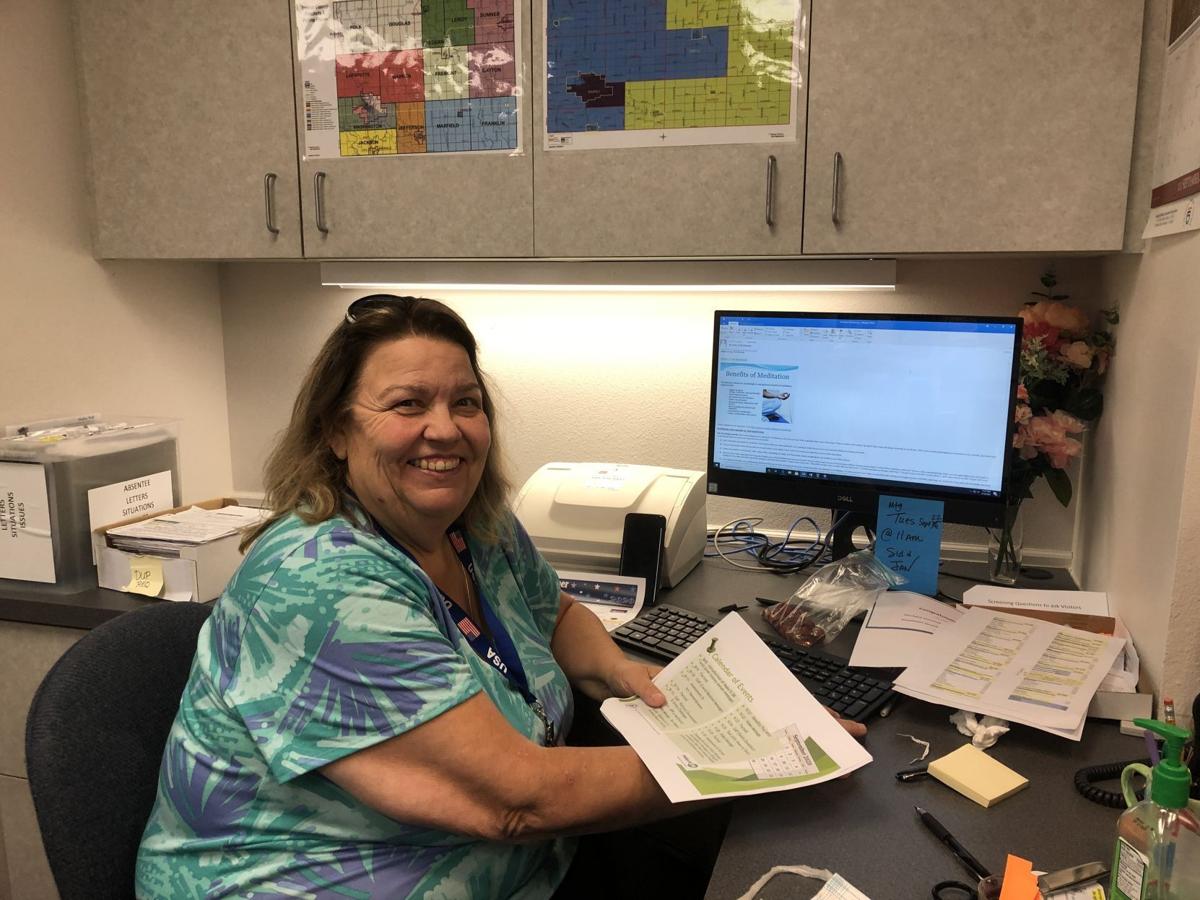 Jackie Hoggins helped facilitate the Make It OK program for Bremer County at the suggestion of Jan Heidemann, the county’s mental health and disabilities coordinator. 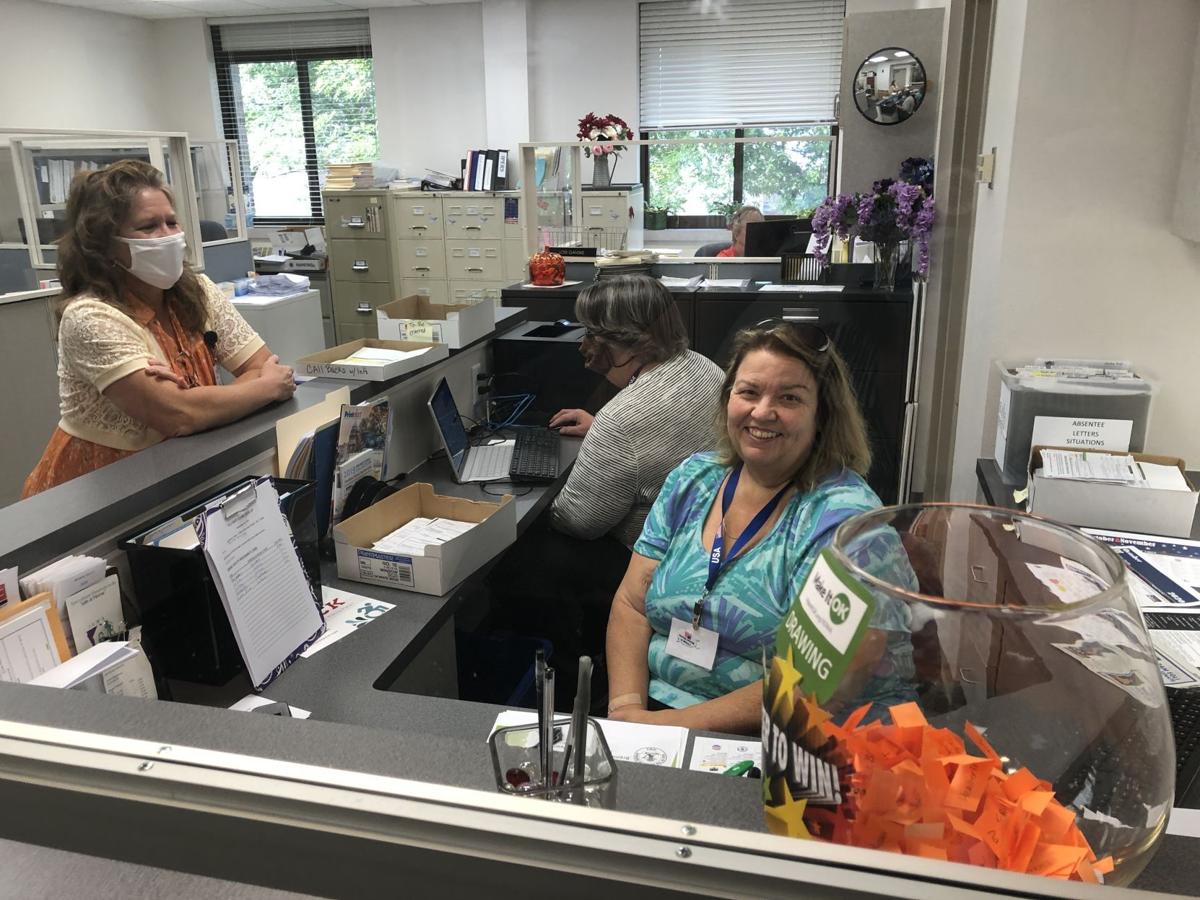 Sitting near the Make It OK bowl, Jackie Hoggins greets visitors to the Bremer County Auditor’s Office with her colleagues.

Jackie Hoggins helped facilitate the Make It OK program for Bremer County at the suggestion of Jan Heidemann, the county’s mental health and disabilities coordinator.

Sitting near the Make It OK bowl, Jackie Hoggins greets visitors to the Bremer County Auditor’s Office with her colleagues.

Experts are quick say they understand the value of good mental health in theory.

But few know it in practice as well as Jackie Hoggins, an election clerk at the Bremer County Auditor’s Office.

In 1997, as a Campus Life Director at Westminster College in Salt Lake City, she was helping the children of divorced couples cope with the stress of the family breakup.

But then her effort took on a life of its own and became a personal mission for Hoggins, culminating in a consultancy she founded called Haus of Coaching and Mediation.

Hoggins’ passion for helping others led her next to a public affairs position with the U.S. Army, which she held for six years, and eventually led to the creation of Healing Heroes in the Heartland, a non-profit offering holistic treatment for PTSD survivors, which she now runs with her husband, John, out of the Quad Cities.

So when Jan Heidemann, the Bremer County Mental Health Disabilities coordinator, suggested recently that the county participate in a nationwide initiative aimed at destigmatizing mental and brain health called “Make It OK,” Hoggins, who had been just recently hired at the auditor’s office, jumped at the chance to make it work.

“It’s just an extension of our non-profit, it’s just what we do every day,” Hoggins said.

This is the first time the county has participated in this program, said Auditor Shelley Wolf.

Since Sept. 8, the 184 county employees have received daily uplifting messages from Hoggins, who works on the content along with Wolf and Heidemann.

“The first day the response was overwhelming from the employees thanking us and sharing some of their issues,” Hoggins said.

A jar by the plexiglass partition — placed in front of her desk for safety after the coronavirus pandemic demanded distance between people — attests to the popularity of the program. It holds the names of employees who have opted to enter a drawing for prizes after the program ends.

The daily messages have ranged from tips for meditation to positive quotes about self care and well being.

Meanwhile, Heidemann enlisted the help of a social work intern from Minnesota State University-Mankato, who is doing her practicum at the county’s Community Based Services. The intern will work on creating motivational stones as tokens of appreciation for program participants.

Announcing the voluntary program to the employees, Bremer County Supervisor Tim Neil, the board chair, said the global pandemic had added extra pressure to everyone’s lives.

“Our level of stress and the people we serve is elevated,” Neil wrote. “You never know what challenges a co-worker or customer is facing each day. Whether it’s at the counter helping a customer or a road you might be grading, take a minute to consider whose lives you are impacting and the difference you make in your daily interactions. Sometimes, it is a needed smile or gesture of compassion that makes the greatest contribution.”

The program has been so successful that Wolf is considering expanding it past the Nov. 3 election. In fact, she said her staff would especially benefit from it in the weeks leading up to the vote.

Hoggins said the program is expected to make a real difference.

“The Winston Churchill quote — ‘We make a living by what we get. We make a life by what we give’ — it really is my mantra,” she said. “I know the value of good mental health and support.”