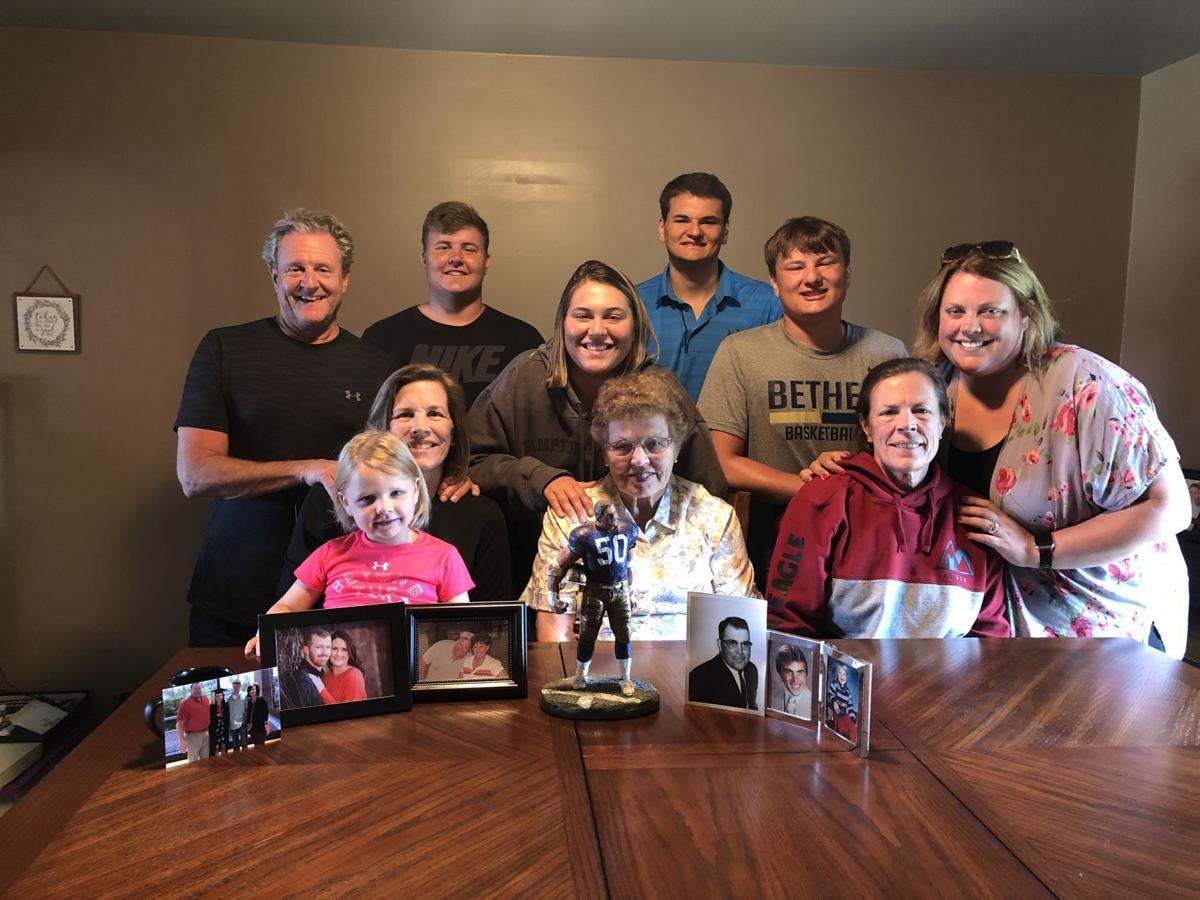 On the family farm on Tuesday morning, the family of Kevin Barz posed with pictures of those who were gone before them. In front are: Kendyl Petersen, Janelle McCloskey, Marlys Jass and Cyndee Roskens. Back row consists of Kevin McCloskey, Colin McCloskey, Taryn Barz, Coleton Barz, Trey Barz and Chelsea Petersen 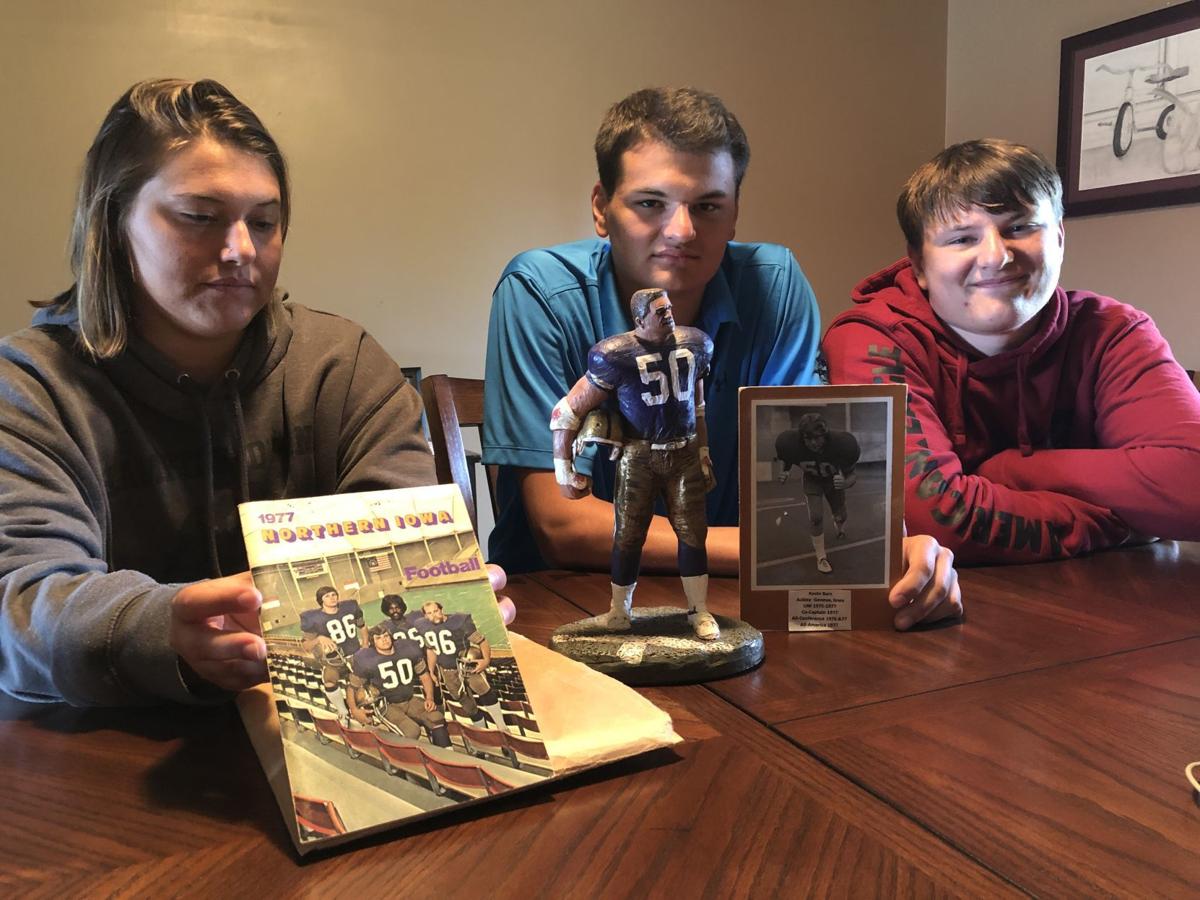 Taryn, Coleton and Trey Barz display some of their late father’s memorabilia from the 1977 UNI football season. Kevin Barz was a co-captain of the Panthers along with being named to the all-North Central Conference and Division II All-America teams. 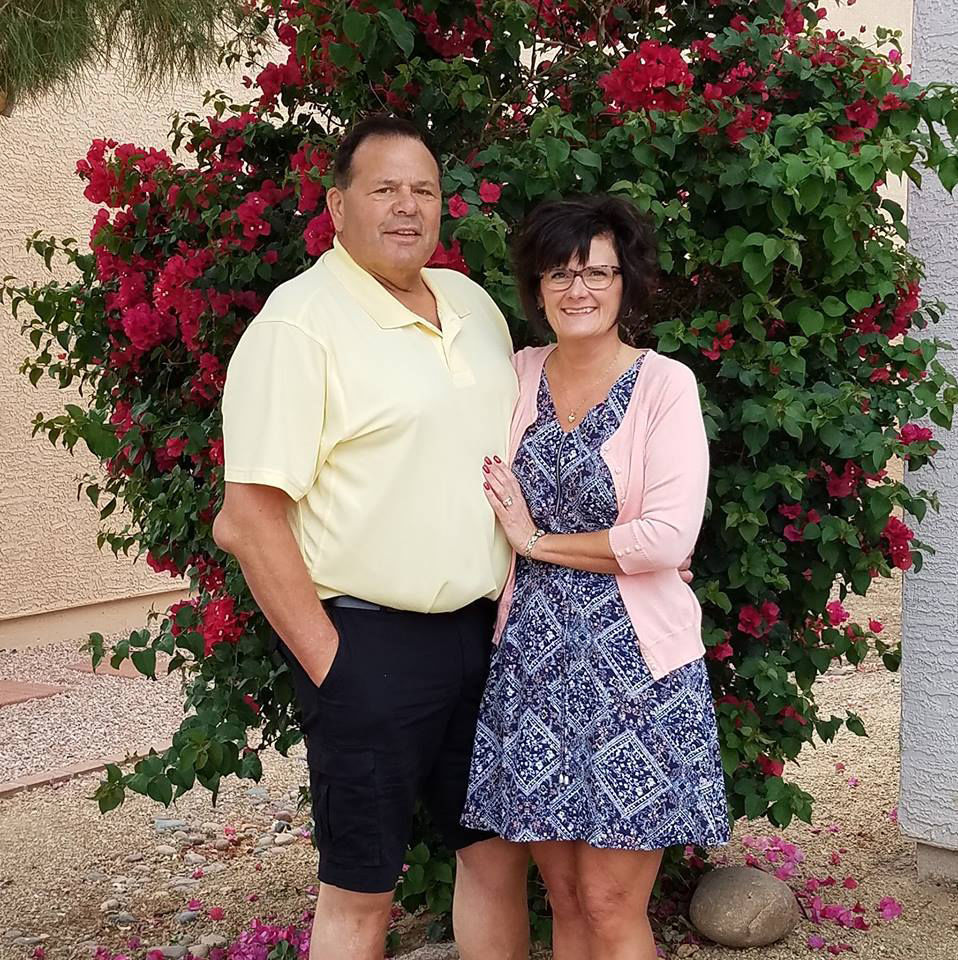 On the family farm on Tuesday morning, the family of Kevin Barz posed with pictures of those who were gone before them. In front are: Kendyl Petersen, Janelle McCloskey, Marlys Jass and Cyndee Roskens. Back row consists of Kevin McCloskey, Colin McCloskey, Taryn Barz, Coleton Barz, Trey Barz and Chelsea Petersen

Taryn, Coleton and Trey Barz display some of their late father’s memorabilia from the 1977 UNI football season. Kevin Barz was a co-captain of the Panthers along with being named to the all-North Central Conference and Division II All-America teams.

He prepped for a career as a professional athlete and coach.

But fate would call him to a much bigger stage and serve him a much higher honor than a Hall of Fame spot.

As life would have it, Kevin Barz was destined to become a coach and a captain of his own dream team — his family.

Co-captain, all-conference and All-American offensive tackle of the 1977 University of Northern Iowa Panthers, as a son, a big brother, and later on, as a father, he did what great coaches do with seeming ease — motivate, mold and model behavior.

In this role, he helped lead the Barz family team through wins and losses, the summits and abysses of life’s journey.

But it wasn’t until his life — and that of his wife, Julia — ended in a fatal accident on July 5, that the impact of Kevin’s coaching could truly be put in perspective.

It is the bitterest of the sweet ironies of human existence that a person is refracted in the shards that make up their life only when the eternal absence presents itself.

For Kevin and Julia, who were inseparable since they met, death came unexpectedly and tragically.

It happened at the end of a day full of family fun at Saylorville Lake, where they had gone with the kids to celebrate Julia’s 49th birthday.

On their way back, around 9 p.m., they were returning home to the family farm near Bradford, when a 2014 Chevrolet Silverado, driven by 16-year-old Dawson Kitzman, of Beaman, struck their northbound 2017 GMC Acadia.

The Silverado, which was eastbound on County Road D-25, had failed to stop and yield at the intersection with U.S. Highway 65, colliding with the Acadia, according to a corrected report by the Iowa State Patrol. (The original report stated that the Acadia had failed to stop).

The impact sent both vehicles into the northeast ditch of the intersection.

Julia Barz, 49, and Kevin Barz, 63, were pronounced dead at the scene.

Kitzman, the driver of the Silverado, as well as his passengers — Kade Manship, 16, of Eldora, and Justin Mesch, 17, of New Providence — were transported to Hansen Family Hospital in Iowa Falls, according to the report.

This was not the first fatal crash that the Barz family had lived through, says Marlys Jass, Kevin’s mother.

Thirty-one years ago, Kevin was the sole survivor in a crash that killed his 4-year-old son, Andrew, and his 25-year-old younger brother, Kendal.

The three were on their way to a town celebration in nearby Geneva when the accident happened. The driver of the other vehicle also died.

It was Aug. 13, 1988, a day Marlys will never forget. She lost her youngest son and her first grandson that day.

But mercifully, Kevin, her oldest, was spared. His shattered pelvis and his wired jaw were the physical injuries he had suffered, but his heart, too, was in pieces from losing his son and his brother.

Clenching his teeth through grief and recovery, on Sept. 4, 1988, just weeks after the crash, Kevin stood up, put his walker aside, and walked his sister, Janelle, down the aisle at her wedding at St. Paul’s Lutheran Church in Alden.

It would have been his father’s honor to do that, but it wasn’t to be.

In 1978, Kevin’s dad, Millard, died in a freak gun accident on the family farm.

Fate beckoned at Kevin to step forward and fill in his father’s shoes.

He was just 22, and had been attending UNI.

That first loss, with the weight of its traumatic scars, and at such a formative age, defined who Kevin became as a son, a sibling, a spouse and later, as a father.

Born on May 20, 1956, in Webster City, Kevin is the first of four siblings in the family of Marlys (Lehmann) and Millard Barz.

As a big brother to his sisters, Cyndee and Janelle, and his brother, Kendal, he was protective and giving.

A “pudgy” kid as a pre-teen, he eventually blossomed into a high school athlete, who made his family proud.

“All his growing up days, he was helping his dad and he loved sports,” his mom says. “He was very involved in everything.”

After graduating from Ackley-Geneva High School in 1974, where he wrestled and played football, his athletic and leadership skills took him to Ellsworth Community College in Iowa Falls. There, he played football.

A foot-high statuette with Kevin’s number 50 emblazoned on the jersey, is now a treasured gift for his children.

Eventually, Kevin landed at UNI, where he became a co-captain and earned all-North Central Conference and Division II All-America honors during his senior year in 1977 as an offensive tackle.

“He only played for purple and gold,” says his sister, Janelle, referring to the colors of Kevin’s high school and college alma maters.

His speed and his leadership on the field caught the eye of NFL scouts. The Oakland Raiders, the Tampa Bay Buccaneers, the New York Giants and others tapped him with offers to continue his career as a professional football player. He tried out for the New York Jets.

All that changed when his father passed away.

Parting with his dreams to play professionally may have been an unfulfilled aspiration for Kevin, but never really a regret he harbored.

“I felt badly for him,” his mom says, speaking of Kevin’s lost opportunities.

But Kevin did not view his predicament with bitterness.

To him, it was a challenge he had been preparing himself for his entire life.

He took the skills he had learned from his coaches and applied himself on the farm, helping his widowed mother and his siblings pull through.

To the rest of his family, he became the Barz team coach and captain.

“He helped me through everything,” his mom says. “He was kind of a ‘yes’ guy. He was always thinking of the other guy. I don’t think he lost his cool very often.”

That’s how his kids, daughter Taryn, and sons Coleton and Trey, will remember their dad.

He was there for them at every softball and basketball game Taryn and Coleton played and at every wrestling match Trey competed in.

On or off the field, Kevin rooted the loudest for his kids.

“I could always hear his voice,” Taryn says.

Cognizant of the preciousness of every moment — an awareness driven home by the losses he had survived — Kevin made sure he and his kids lived life to the fullest.

He would drive through snow storms to attend Coleton’s games in Minneapolis, where he is now a student at Bethel University.

In May, putting on a 48-hour hold planting corn and beans, his main livelihood as a farmer, he made sure he traveled to Nashville, Tennessee, to see Taryn earn her master’s diploma in sports administration.

In the fall, when his youngest, Trey, goes to UNI to pursue a degree in computer science, Kevin, who was so proud to see his son choose his alma mater, will be there only in spirit.

“He was our glue,” said Chelsea Petersen, of Waverly, his niece.

What was most unique in Kevin’s coaching method, his family members say, is how he managed to bring their diverse personalities together when it mattered.

“We were his team and he wanted to make sure we were working toward the same goal,” Taryn says.

Outside of family obligations, Kevin was a dedicated member of the Geneva-Grain Fast Pitch, and along with life-long friends, traveled the country in a converted RV bus to play softball and make memories.

He was also the neighbor who would plant the field for the family next door dealt with their daughter’s cancer.

In the search for a life partner, it took Kevin some time to hit his stride, but he didn’t give up.

His first two marriages, to Tracy Roegner and Cinda Berghoefer, ended up in divorce, but of those unions, his greatest blessings — his kids — came.

In 2007, thanks to the help of a couple of friends, he went on a blind date with Julia Anderson, then a hairdresser in Williams.

Born on July 5, 1970, to Dallas and Linda Anderson, Julia had graduated from Dows High School in 1988, and later from a cosmetology school where she eventually became an instructor.

She was the mother of two kids, Kelanie and Kolton.

It turned out Kevin and Julia were a great fit. They started going to each other’s children’s sports games and events, and found that the kids, too, got along well.

True to his coaching principle of inclusion, Kevin made the kids part of his engagement proposal in 2010.

It was a Christmas Eve surprise for Julia and the two sets of kids.

On Aug. 4, 2011, the couple tied the knot on the beach in Charleston, South Carolina, in the presence of their children.

A framed collage of pictures on the wall in their farm house tells the story of that happy day.

In a group photo, with everyone smiling widely, they celebrate the new union.

Their joy captured in the pictures then stands in stark contrast with the family’s grief on this recent Tuesday afternoon, as they make final preparations for the visitation and the funeral.

The couple will be resting together at Pleasant Hill Cemetery in rural Iowa Falls.

As they cope with the double loss of their dad and their step mom, and as Marlys grieves the loss of her oldest son, they all agree that there is some comfort in the fact that Kevin and Julia went together, just like the way they lived.

On July 20, the family will gather again to celebrate the wedding of Julia’s daughter, Kelanie, to Brady Roland, a union long in the planning.

Julia and Kevin will not be there to stand by her.

However, their love for each other and their blended family will sustain the ceremony, perhaps with some tears.

In facing adversity and in joy, the Barz team will have to show what their coach has taught them so viscerally — show their home spirit no matter what the challenge.

“He was our rock,” Marlys says.

Some clouds this evening will give way to mainly clear skies overnight. Low 52F. Winds NNW at 10 to 15 mph.