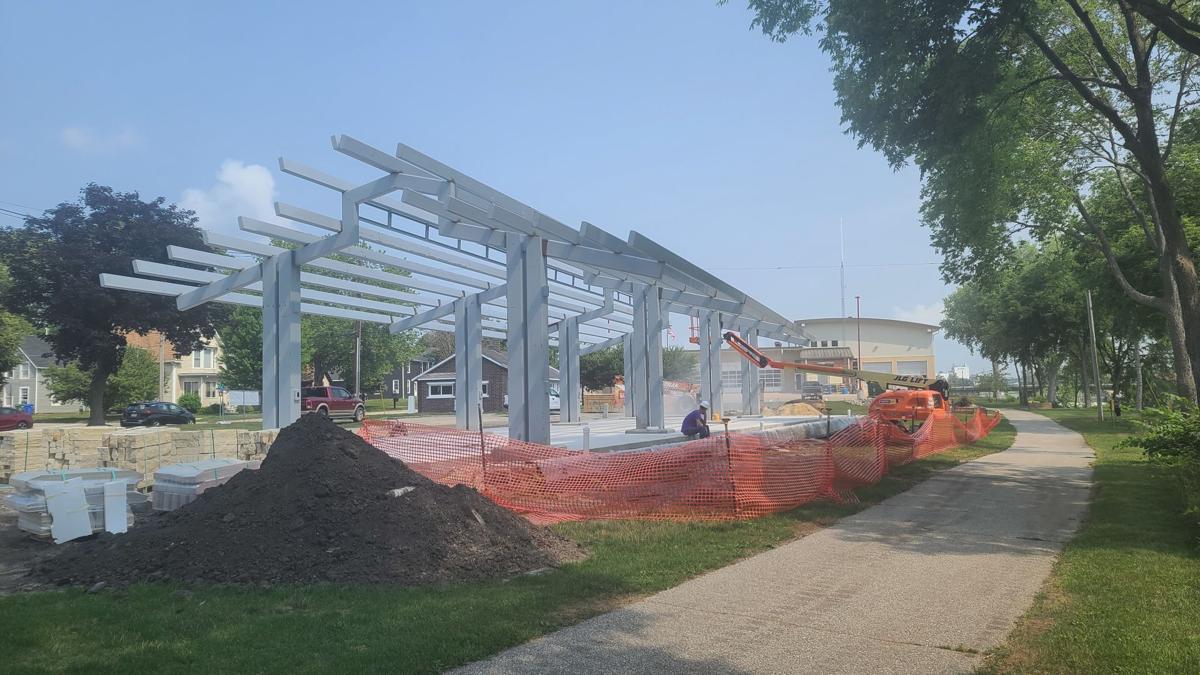 Cardinal Construction crews place roof beams on the shelter at South Riverside Park. This project is nearly complete, according to Waverly Leisure Services Director Garret Riordan, and a plaza between it and the Farmers Exchange Building is scheduled to begin soon after. 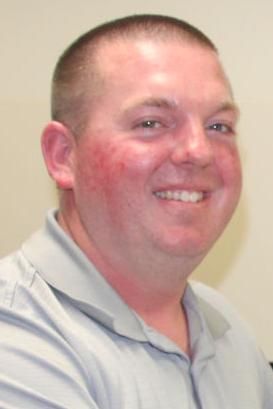 The Waverly City Council on Monday night a pair of resolutions that would allow for the construction of a plaza between the recently renovated Farmers Exchange Building and an under-construction open-air pavilion/shelter at South Riverside Park.

The measures – one to OK the plans and specifications for the plaza and the other to award the contract to Building & Grounds LLC, of Ossian, for $185,590 – were each passed on 4-3 votes. Ward 4 Councilwoman Heather Beaufore, Ward 5 Councilman Tim Kangas and At-large City Councilman Matthew Schneider all voted against the action.

The plaza was originally going to be taken up July 12, but questions over costs, as well as what materials were in the plans led to the council postponing the resolution until Monday.

Leisure Services Director Garret Riordan relayed the information from the architect with Align Architecture and Planning of Waterloo on several of the elements of the plaza. One of the central features of the area is a stamped-concrete pathway running through the center that would resemble railroad tracks.

Riordan said the walkway follows where a railroad was located when the park was the Farmers’ Cooperative at that location.

“We’re trying to keep as much of the railroad there that we can,” Riordan said. “This is a way to actually show here’s where the railroad tracks were.”

He added the path is compliant with the Americans with Disabilities Act, which should allay concerns about the stamped concrete would be “unlevel” or “slick.” There would only be a 1-inch crown at the center of the slab, and that type of walkway is used in many different places.

At both ends of the path are what are called “railroad stops,” which use recycled railroad ties to place signage along the way. Quoting the architect, an original, unused stop was discovered near the Nestlé plant, and former mayor Bob Brunkhorst inquired about acquiring it.

“We’re very thankful that Nestlé’s happily donated the stop, and Magee Construction donated its removal and relocation to our site,” Riordan read from the architect’s note.

Riordan said the contractors will duplicate the stop at the opposite end of the walkway.

Many of the queries from the previous meeting were for a circular area originally slated for a splash pad, but instead was redesigned as a space for gatherings like outdoor wedding receptions or stage performances.

The area is surrounded by a retaining wall with 22-inch-high limestones for seating, as well as a circular walkway.

“They mimic what we have at the (Shades of Rhythm) Amphitheater (in Kohlmann Park),” Riordan said.

The blueprint also depicts several tables and benches in different areas of the park. The layout also included a parking lot near the Exchange Building, but the council denied an alternate bid as part of the resolution for that element.

Additionally, Riordan said contractors will use old pavers from the Bremer Avenue reconstruction project to depict where the scale used to be on the south side of the Exchange Building.

The shelter, which would primarily be used for the twice-weekly Waverly Farmer’s Markets, is expected to be completed in the next few weeks, and the construction of the plaza is to commence soon afterwards.

When taking up the contract with Building & Grounds, Kangas said his biggest concern was the Ossian company had the only submission.

“I would have like to have seen some competitive bids just to see where the price might have gone,” Kangas said.