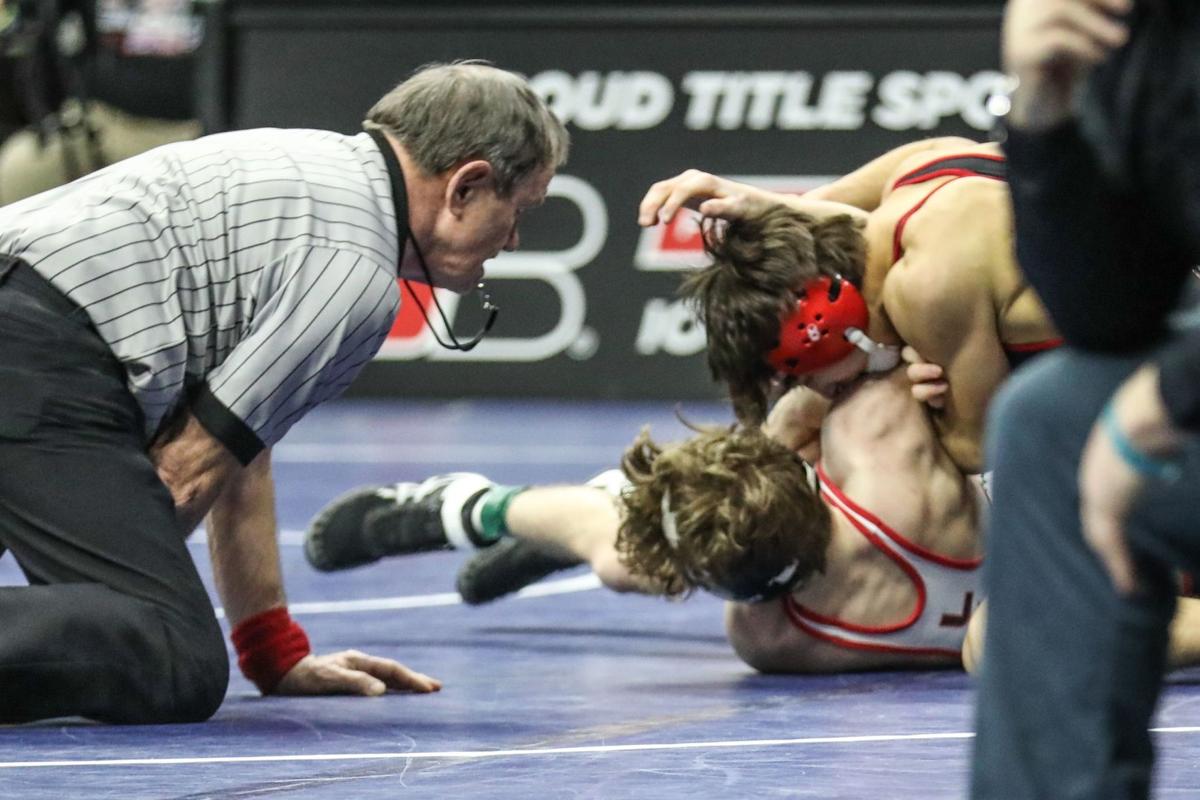 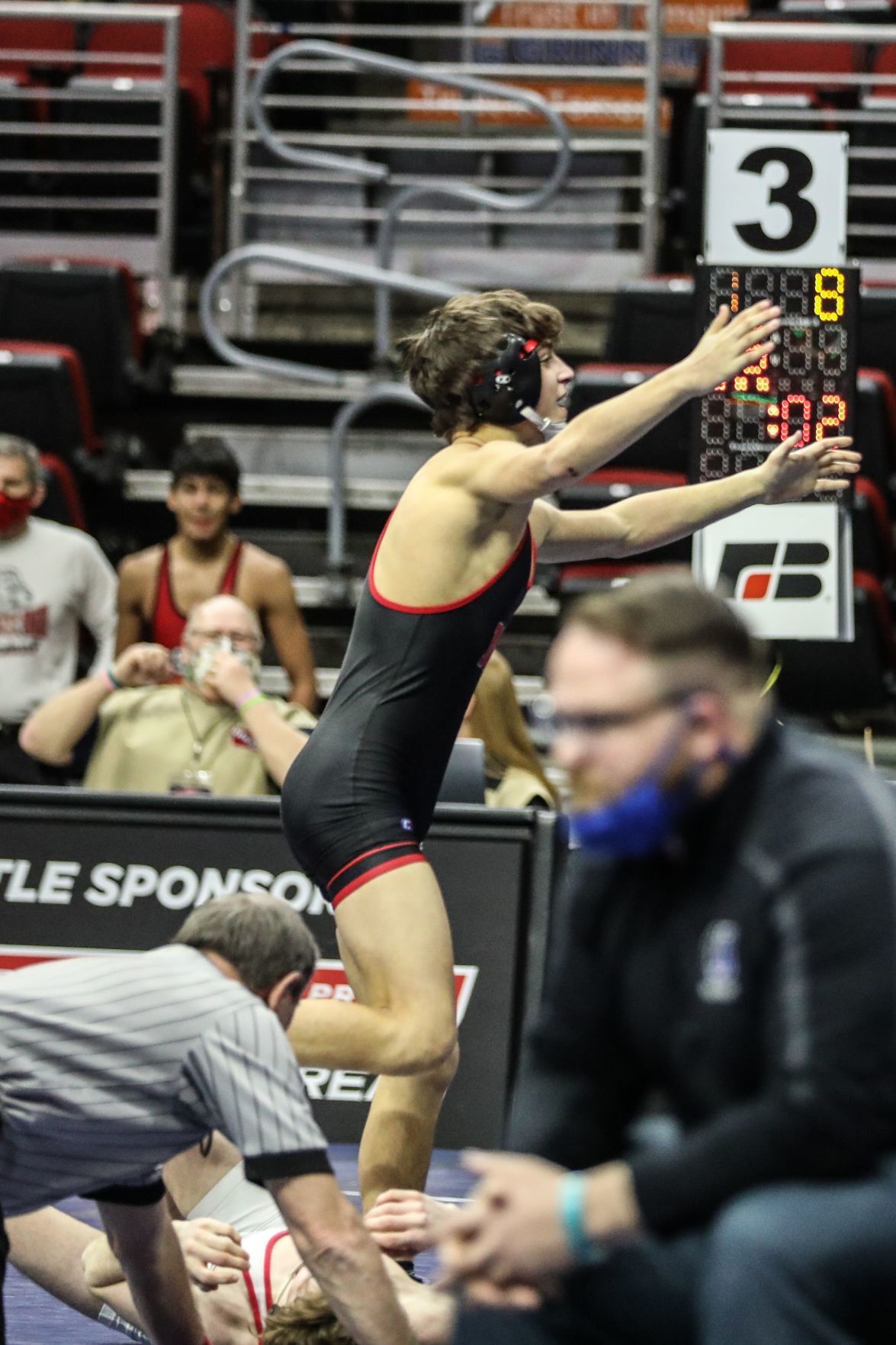 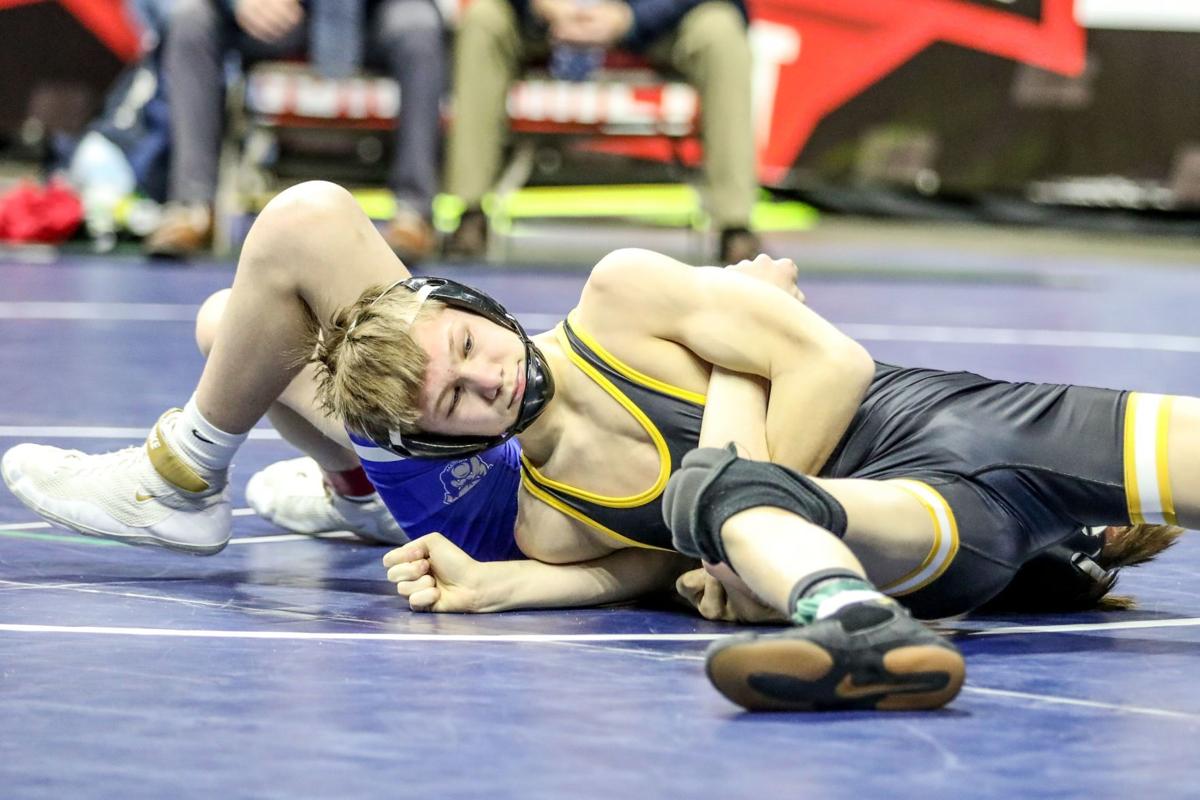 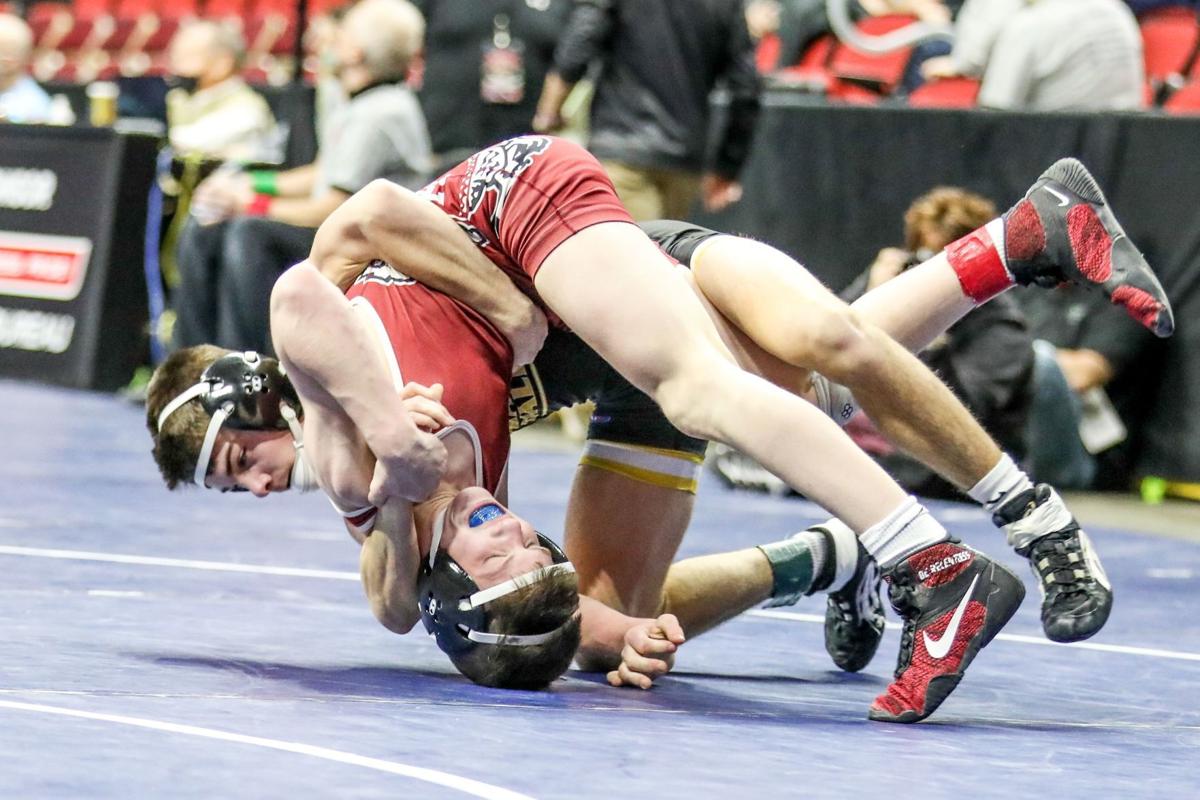 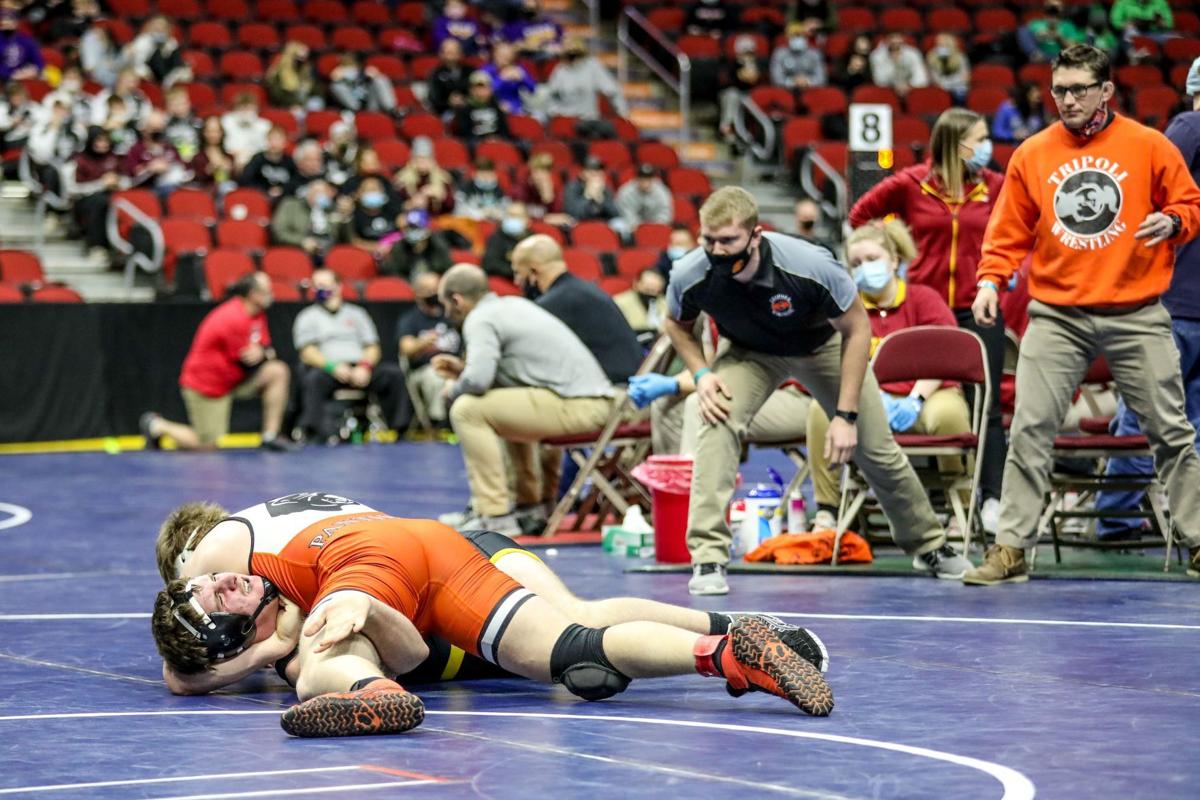 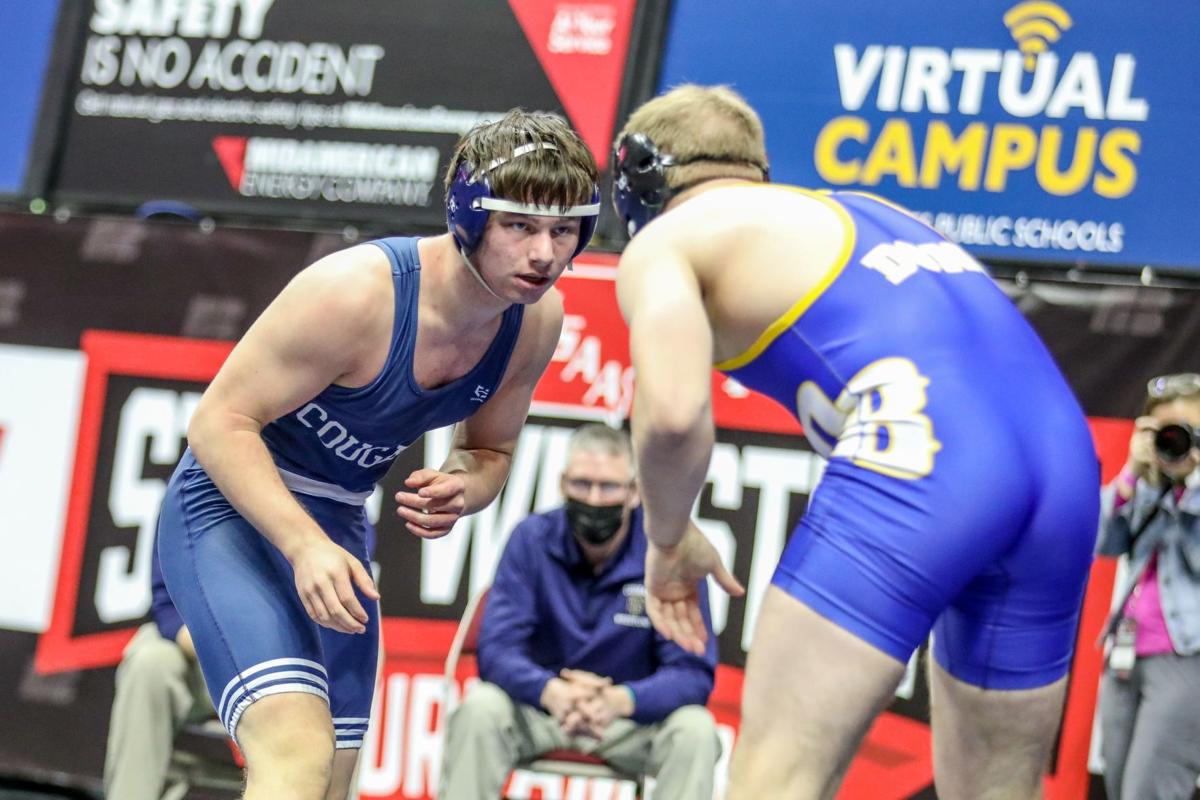 DES MOINES – Trey Nelson knew he had to wrestle his way and not let his opponent dictate the match.

The Nashua-Plainfield junior learned the hard way earlier in the season. Nelson and Lisbon’s Quincy Happel squared off in the 132-pound first-place match at the 54th Tripoli Invitational on Jan. 9. Nelson never established much of a rhythm, and Happel earned a 7-2 decision.

More than a month later, and with the stakes much higher, the two met in a Class 1A Iowa High School Athletic Association state quarterfinal Thursday morning at Wells Fargo Arena. For a while, Happel, who is ranked No. 6, was in control and, at one point, it looked like he was going to come away with his second win over Nelson of the season.

Nelson reminded himself to keep fighting, keep pressing, keep waiting for his shot. When it was there, he took it. Nelson spun around for a quick reversal and pinned Happel in 4 minutes, 59 seconds to advance to Friday’s quarterfinals.

“I wanted to keep going, and it’s really important to get a win,” said Nelson, who improved to 44-5 on the season. “I found some way to get him.”

Nelson admitted he doesn’t let his emotions get the best of him, but he let out a bellow of excitement following Thursday’s victory.

“It’s super exciting because before, my family, obviously they want me to win, but I felt a lot of pressure coming in because I knew it was a big match and it’s important I win in the first round because I lost earlier,” he said. “It was a big match, so winning it, I had to show my emotion.”

Nelson will face No. 3-ranked Hagen Heistand of Logan Magnolia. Heistand improved to 41-0 after pinning Central Springs’ Brock Mathers in the first round.

“I’ll have a tough match in the quarters,” said Nelson, “but I’ll have to let it fly.”

Nashua-Plainfield is tied for seventh in the Class 1A team standings with 14 points. Waterloo Columbus Catholic also has 14 points. Don Bosco is in first with 41, followed by Lisbon (31) and Logan-Magnolia (23).

Wapsie Valley qualified two wrestlers to this week’s traditional state tournament, and both of them advanced into the quarterfinals.

Freshman 106-pounder Easton Krall was the first Warrior to punch his ticket to the next round with a 13-1 major decision over Ogden’s Kolton Munson.

“I’m excited, ready to go,” said Krall, who earned his 30th win of the season Wednesday. “Throughout preparation, practicing and getting ready to be here and do my best, and show people what I can do.”

Easton’s older brother, Kaleb, was a state champion for Wapsie Valley at 138 in 2017 and wrestled at Wartburg College. Kaleb shared some words of encouragement with Easton prior to Easton’s first match at state.

“Good luck, do your best and do what you can do,” Easton said of what his brother told him.

Dawson Schmit also advanced to the quarterfinals after pinning South Hamilton’s Keyton Remsburg in 4:38. Dawson is no stranger to Wells Fargo Arena. He first appeared at state as a freshman last winter. And, like Krall, has an older brother who once donned the Wapsie Valley singlet. Donny Schmit won the 106-pound state title as a sophomore in 2017 – at the time, the program’s first state champion since 1995.

“There was a little (bit of) nerves,” Dawson Schmit said of his first-round match. “There’s always nerves before every match. Big match, first round, you just want to win that match. Just keep moving on.

“I just had to take things a little slower, get things more tight so that way I could turn him and make sure (I could) get the fall.”

Blake Brocka is just the second wrestler Tripoli has qualified for the Class 1A state tournament since forming its own team four years ago.

And the Panthers’ 195-pound senior is making the most of his final season in an orange singlet. Brocka pinned Sigourney-Keota’s Cade Streigle in 2:47 to advance to Friday’s quarterfinals, but the win was anything but easy.

In fact, Streigle had Brocka locked up and nearly pinned a couple of times. Brocka’s back was square on the mat as time expired in the first period, which gave him an extra jolt of energy.

“I haven’t been on my back that much this year,” Brocka said. “It kind of gives me a little bit of new life every time I do and puts a few things in perspective when it happens and just gives me a little extra burst to finish out the match the way I want to.

“Obviously, you don’t want to be on your back. Down here, you’re going to be wrestling a good kid wherever you go, so you’ve always got that chance. You’ve always got to have that prime mentality of once you’re there, (you’ve) got to go and just try to give everything you’ve got the rest of the match.”

Brocka will match up with Iowa City Regina’s Ronan Poynton for a trip to the semifinals Friday.

The first day of the traditional state tournament was anything but kind to Denver. None of its four qualifiers won their opening matches, but three of the four are still alive.

Brooks Meyer (126 pounds), Isaac Schimmels (138) and Ben Foelske (152) each won their consolation matches Thursday to advance to Friday. Brennen Graber (182) lost both of his matches, and his season came to a close.

Both North Butler/Clarksville wrestlers are still in hunt for state titles.

Freshman Tanner Arjes, a 120-pound freshman who is ranked No. 8 in Class 1A, edged Cascade’s Trever Freiburger by a 4-3 decision to advance into Friday’s quarterfinal rounds.

Arjes faces No. 2-ranked Brandon Paez of Lisbon on Friday for a shot at getting into the semifinals, while Buss takes on Underwood’s Easton Eledge.

Sumner-Fredericksburg bowed out of the state tournament early Thursday afternoon. Both S-F’s qualifiers – Trace Meyer (106) and Kyle Kuhlmann (195) – went 0-2 on the day.

Meyer lost 6-1 to Mount Ayr’s Drew Ehlen in the first round and then dropped a 13-0 major decision to Akron-Westfield’s Cael Morrow in the consolation round. Kyle Kuhlmann received a tough draw in Don Bosco’s Cedric Yoder to begin the day, and Yoder earned a 24-9 tech fall. South Hamilton’s Trevor Thompson knocked Kuhlmann out of the tournament with an 8-1 decision later on.

Former Clarksville coach Ron Peterson will be inducted into the Iowa High School Athletic Association and the Iowa Wrestling Coaches Association’s Hall of Fame on Saturday night before the finals of the traditional state tournament at Wells Fargo Arena. Peterson was a five-time state champion as a coach. He began his coaching career at Clarksville in 1980, where he won three state titles, including the Class 1A state duals in 1989-90 and the traditional team title in ’91. Peterson then left for Cedar Rapids Prairie, where led the program to a 3A state duals title in ’94 and a traditional team title in ’95. During his tenure at Prairie, Peterson was 51-3-1 in a dual setting. He then became the head coach at Simpson College from ’95-2008. Under Peterson’s leadership, Simpson placed in the top 10 of the NCAA Division III national tournament five times. He also coached 19 All-Americans, including 2001 national champion and Hodge Award winner Nick Ackerman.

Of the near 100 three-time state champions in IHSAA history, Bremer County has four to its name. Former Waver-Shell Rock standouts Jake Ballweg (2008-10), Cody Caldwell (2009-11) and Cody Krumwiede (2009-11) accomplished the feat, as did former University of Northern Iowa starter Dylan Peters (2010-12), who wrestled for Denver-Tripoli during his prep career.

Waverly-Shell Rock is one of three teams overall, including one of two in Class 3A, to qualify 12 wrestlers to the traditional state tournament. Waukee also qualified 12 in Class 3A. Don Bosco advanced 12 in Class 1A. Southeast Polk and Ankeny qualified 10 in Class 3A, while fellow 3A schools Bettendorf and Fort Dodge qualified nine. Independence pushed nine through in Class 2A.

Partly cloudy skies in the morning will give way to cloudy skies during the afternoon. Slight chance of a rain shower. High 38F. Winds SSE at 10 to 20 mph.