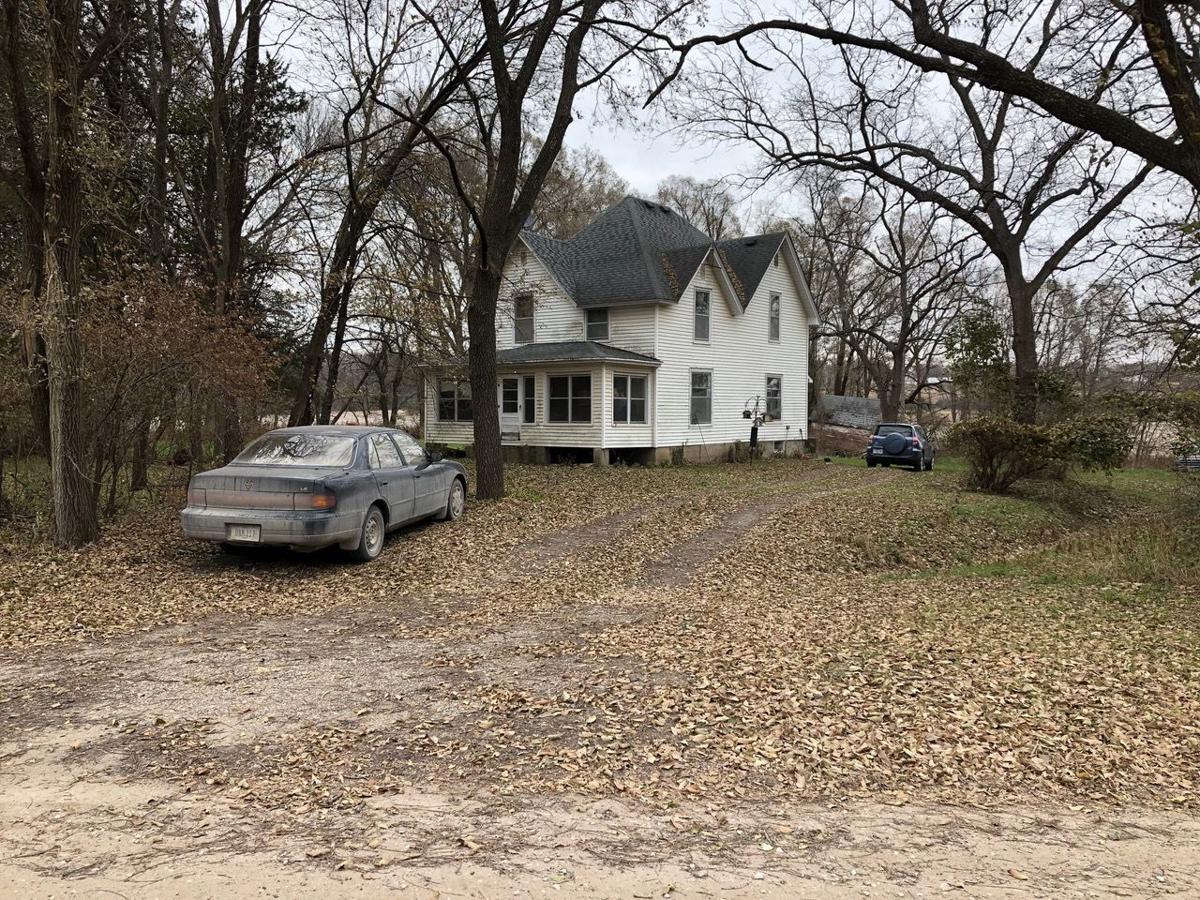 This house was built in 1909 by John Floyd Ballard Sr., Patricia Coffie’s grandfather. This is how it stands today.

Two years ago, I began to ask if Story City Historical Society could help me find the house my grandfather built in Howard Township, Story County. I offered to pay $50 to $100 for someone to take me to the still standing house. No interest.

I talked to another storyteller in Story County and he invited me to an event presented by Roland/Story Historical Society. There I gave the photograph of the house and the old home place to someone who thought he might know the house.

As a kid, I went every summer to the old home place for a picnic in the pasture, some wading in the Skunk River with my Dad (complete with pulling the leeches off after the wading), visits to various sites from his childhood and a stop at the Sheffield Cemetery.

Last weekend, I was again in Story City to tell stories and the gentleman with the photograph said he knew where the house was and would take me there the next morning. When we met, I asked if I should follow him in my car and he said to ride with him so we could talk. What a lovely hour and a half tour beginning with that house—still standing and in use.

This is the house that Grandpa built as it stands today Nov. 10, 2019. Remarkable to last so long, still inhabited, and located off 150th Street and Pleasant Valley Road (a dead end). Just before the one lane bridge. A wonderful local resident whose wife’s parents had owned the farm that abutted my grandfather’s land took me for that lovely tour. He and his wife had owned the farm her parents had owned, had sold it and then in retirement returned to buy back part of it.

I had driven near but not up that dead end road to the house. I had found the place just on the other side of the one lane bridge where there is broken up concrete. My tour guide said that is the location of the 40 and eight cabin. The term comes from the time when a railroad car could hold 40 servicemen or eight horses. That was a great description of the size of the cabin and one I had not heard before.

We saw the restored wetlands on his and his wife’s current place. Herds of 40 to 50 deer might show up in these beautiful wild river lands. The place where the “H” tree once stood is now the beginning of a trail back into the woods and along Skunk River. My Grandmother used to sit in that tree.

He identified Long Dick Creek as we crossed it. That is where my great great grandfather first settled near Fairview by 1855, renamed Story City in 1881. I tend to leave out the creek name when I tell — Skunk River near Story City in Story County creates enough disbelief among storytellers. I take a paper map to prove that is a real place.

He pointed out the stop along Interstate 35, where big rigs or other vehicles can pull in to rest (not a full rest stop, just a stop) and how that place on the other side of the river looks out over fields that once were Ballard’s.

He spoke of when the road became a dead end and how once there was a plan to block the river and flood those rich bottomlands — and those homes and woodlands.

He identified where the stagecoach trail ran. He said people did not settle on the open prairie but in the woodlands near waterways. The prairie fires were terrifying, people needed water and wood and could go out to plant and harvest but needed to live in safer areas near water and wood.

He told how one farm had a tombstone for a Ballard that they used to hold up a grain bin. Later on he and his wife found that Ballard’s grave and it had a stone. Seems the first had a mis-spelling so became again only a useful block of stone.

We spoke of Sheffield Cemetery where many of my family rest. We spoke of the memorial there for the Schweringen Family, remembered for their death in the prairie fire of 1860.

My guide would not accept pay so I made a gift to Story City’s Bertha Bartlett Public Library building fund in his honor.

People loved the stories of the Ballards at the Story Festival.

I think we all need to know and tell more about how ordinary people meet life’s challenges successfully and leave memories for their families.

Patricia Coffie is a storyteller and retired librarian living in Waverly. She can be reached at maemaude@me.com.