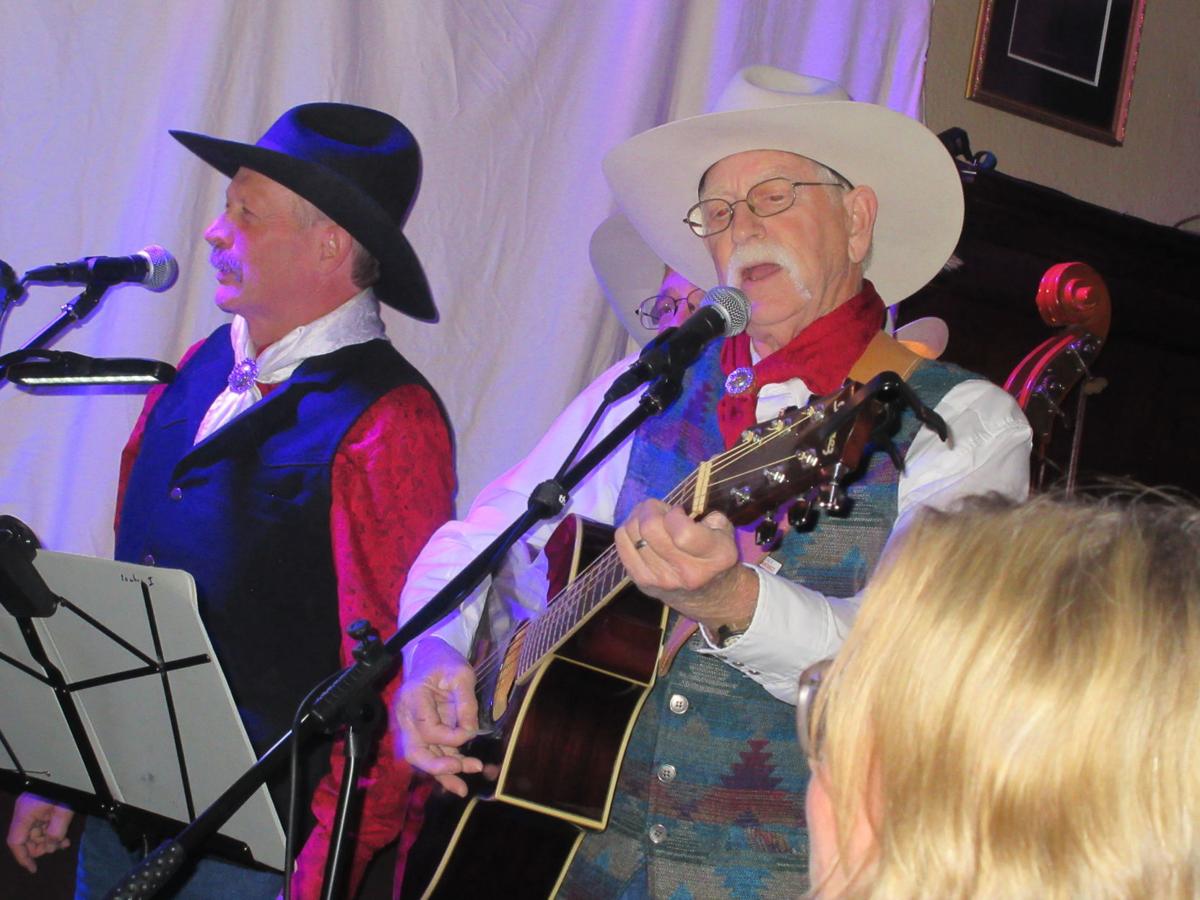 Jim Meyer and Jim Gates play during a pub crawl in Eisenach, Germany. 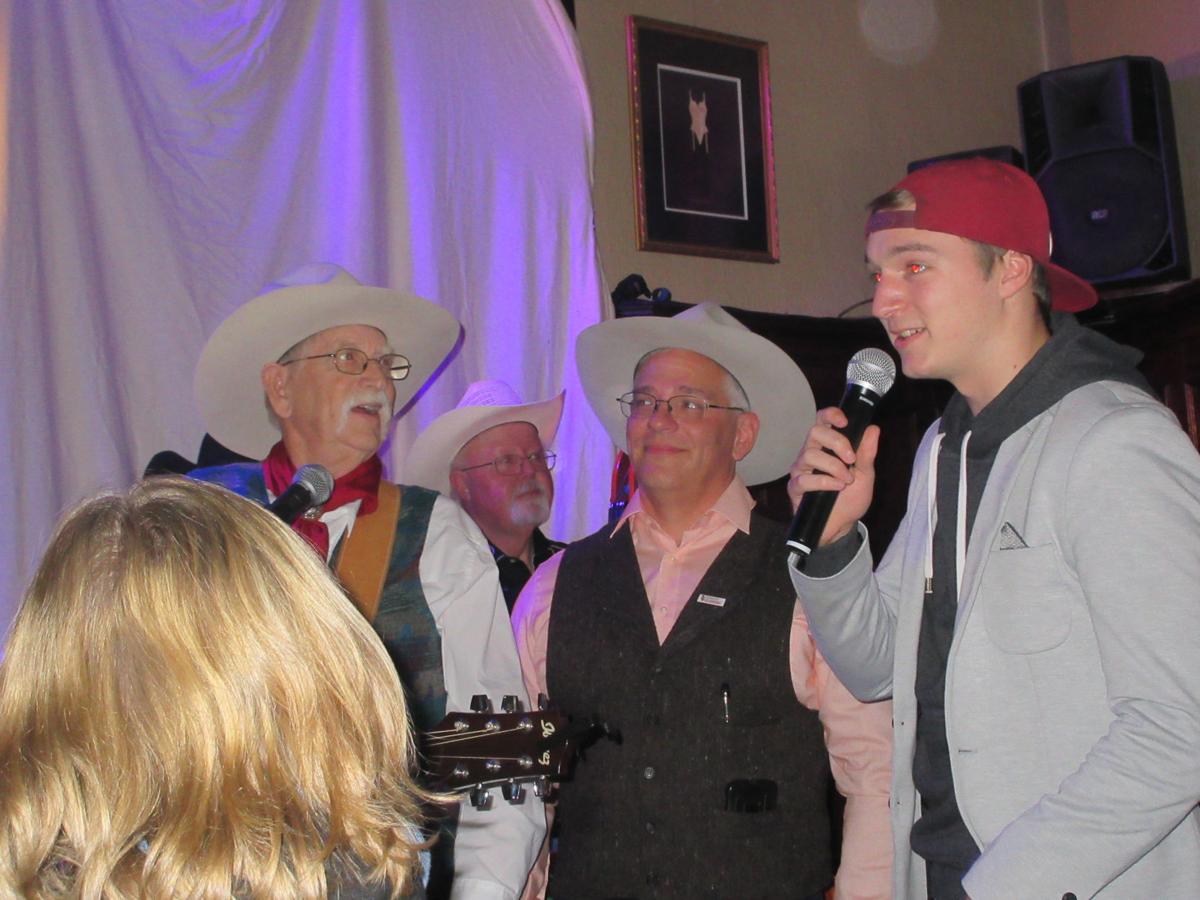 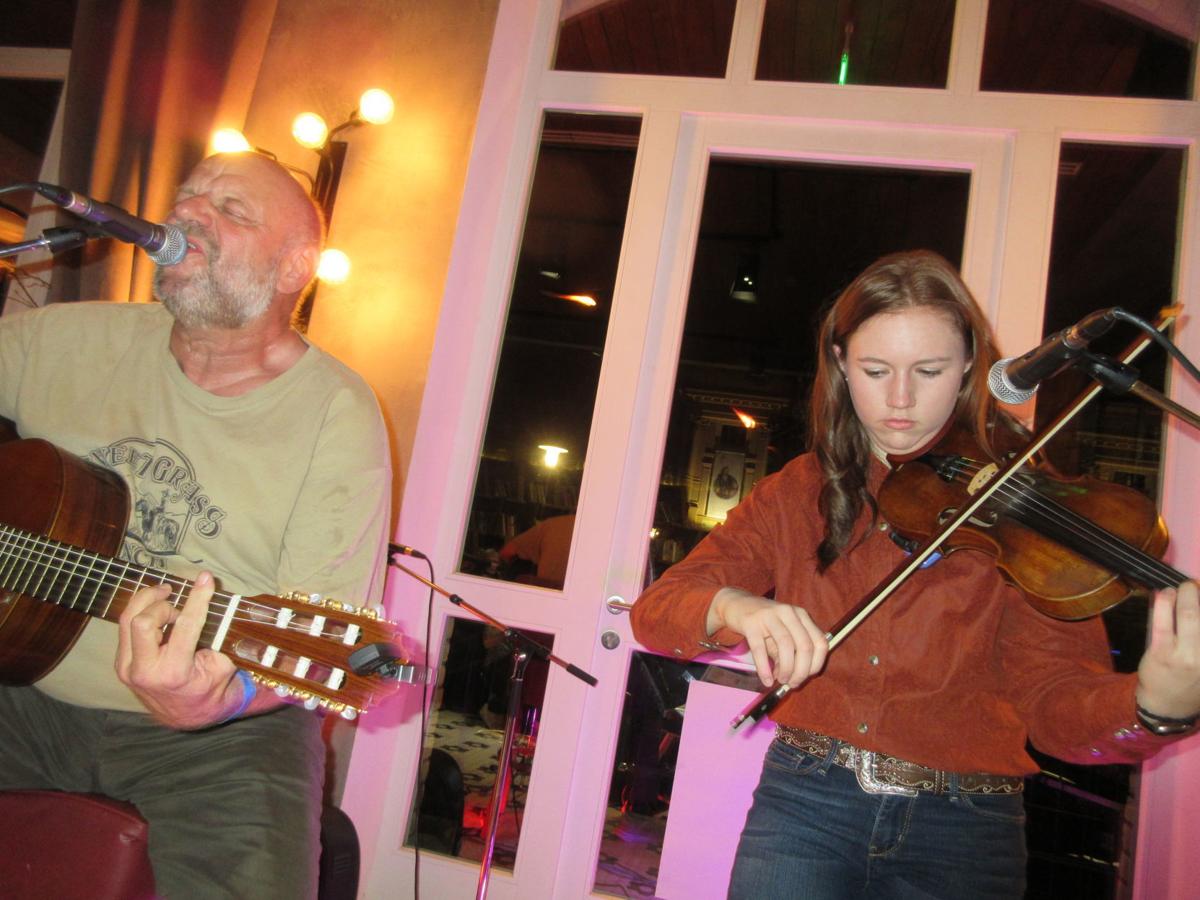 Claire Emerson plays with a folk singer from Denmark. 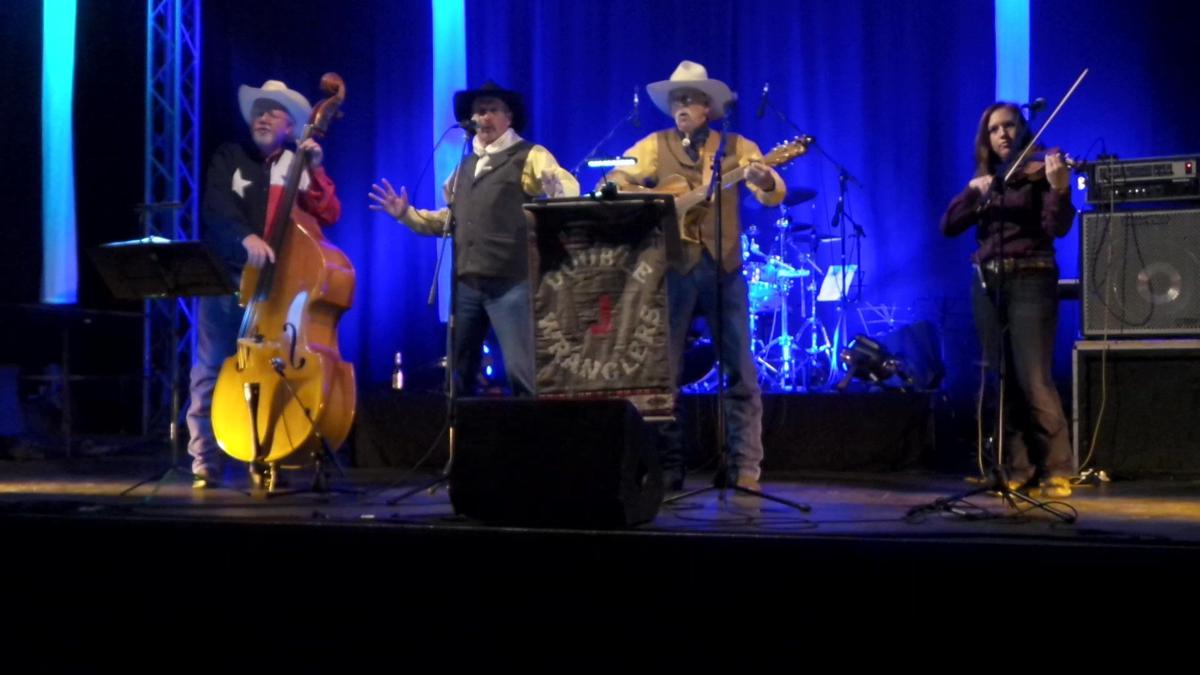 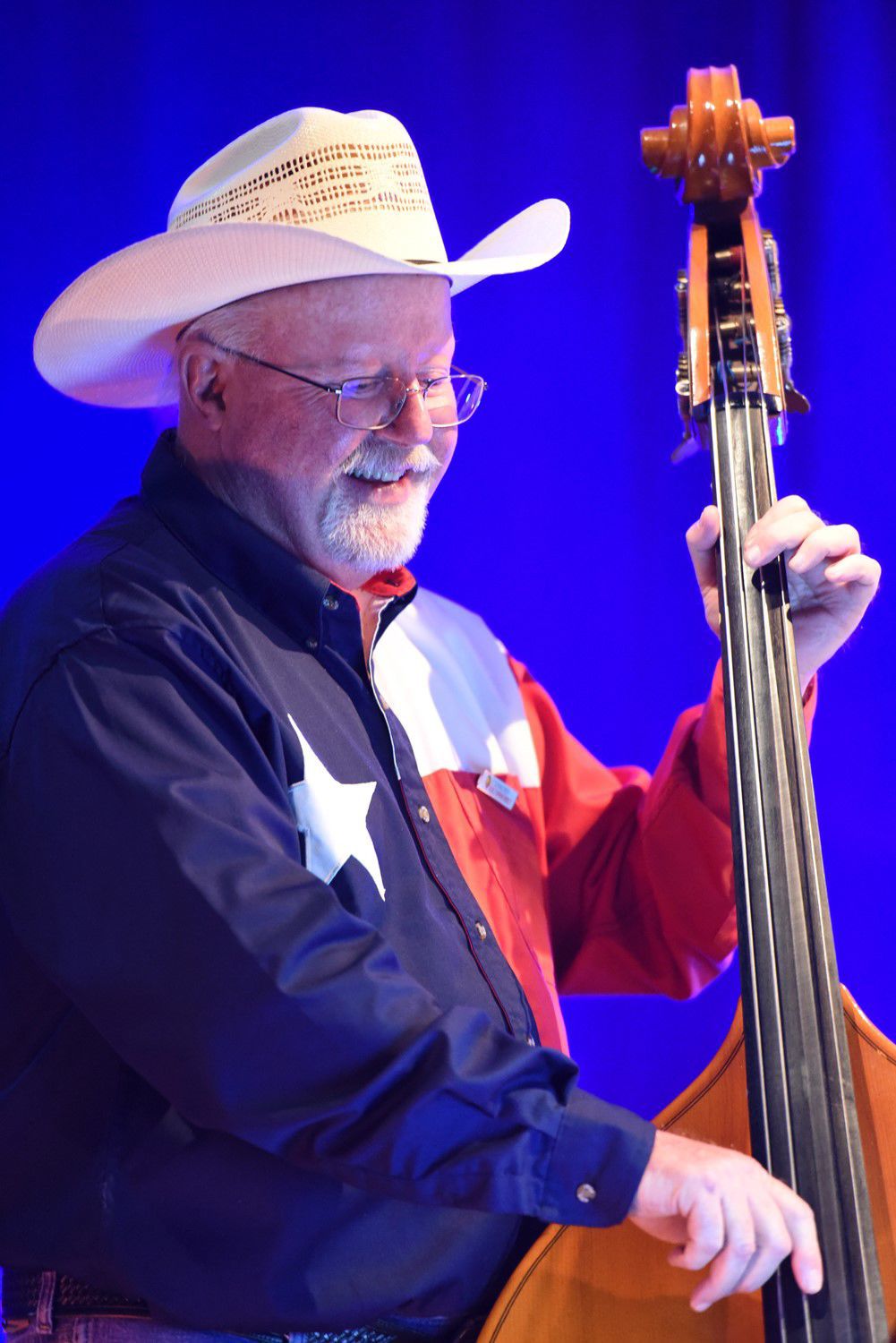 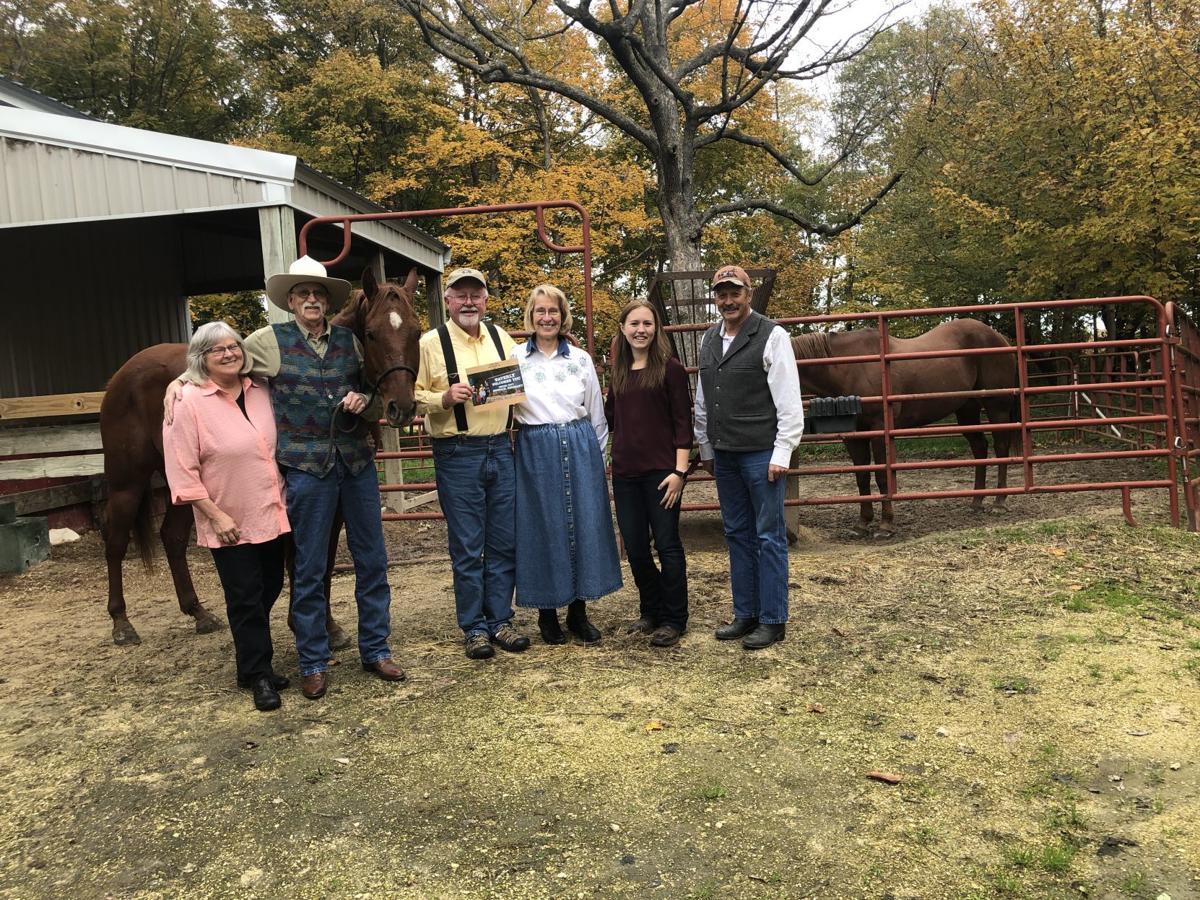 The Double J Wranglers pose for a photo prior to their trip to Eisenach, Germany.

Jim Meyer and Jim Gates play during a pub crawl in Eisenach, Germany.

Claire Emerson plays with a folk singer from Denmark.

The Double J Wranglers pose for a photo prior to their trip to Eisenach, Germany.

This is one way to describe the recent trip of the Double J Wranglers, the area cowboy music band, to Eisenach, Germany.

Put into the host country’s native tongue, it was “unglaublich.”

From the moment they stepped off the train at the Eisenach train station, on Nov. 7, a cloudy Thursday afternoon, until they left five days later, the Waverly group of unassuming performers had, let’s say it full-throatedly, a blast.

It was the 30th anniversary of the fall of the Berlin Wall, which marked the fall of communism and the reunification of Germany, and the Double J Wranglers were invited to participate in the Cultural Exchange Festival in Eisenach, Waverly’s Sister City, to sing their hearts out as part of the celebration.

The group — Jim Meyer, Jim Gates, Larry Wildeboer and Claire Emerson — were the only American band at the fest, which included 100 performers at 16 venues.

With their adrenaline pumping the jetlag out of the way — the flight from Minneapolis to Frankfurt can take off kilter even seasoned travelers — the band hit the ground running. Their first performance was within 24 hours of touching Eisenach soil, on Friday afternoon, at a large department store.

That performance led them to believe — mistakenly, as it turns out — that the rest of their concerts will mirror their American audiences, mostly a 50-plus group, with a scattering of grandchildren.

Boy, were they in for a surprise.

In fact, their first gig was just a warmup of sorts.

That Friday night, they performed in an abandoned warehouse, where other rock concerts typically take place.

When the Double J Wranglers came on stage at 9 p.m., the crowd erupted in a thunderous applause. Since 7 that evening, they had been entertained, every 25 minutes, by musicians and dancers from Eisenach’s four other Sister Cities and local talent. The Waverly group was a culminating moment.

“It was disorienting, the crowd was so loud, the music was so loud, we couldn’t hear each other,” Meyer said. “We had never performed where we had four sound technicians, a light technician and our sound set at such a high level.”

Their first song, “Riding,” about the love of riding horses — the two Jims’ passion and bond — set the tone for the performance. When they got to “Cattle Call,” a traditional cowboy song about the joys of herding cattle, the audience — made up of 25 to 50-year-olds — yodelled at the top of their lungs, along with Gates.

When they got to “Ghost Riders in the Sky,” another hit whose list of performers include Johnny Cash and Frank Sinatra, Brian Pfaltzgraff, the Wartburg professor and current department chair, who accompanied the group, could no longer just stand in the audience.

Pfaltzgraff jumped on stage, sending the crowd into an exhilarating crescendo, singing along the chorus, “Yippie-aye-oh, yippie-aye-ay, ghost riders in, in the sky.”

In the ensuing commotion, Meyer, who plays the guitar, lost his place in the song, and Gates, who uses his God-given pipes to make music, tried to help his buddy catch up by pointing to notes on the music stand, knocking it off the stage by mistake.

“The crowd went wild,” Meyer said. “We sorta stopped, while they picked everything up, and put it back on the stage, and away we went.”

While this memorable moment was unfolding, Wildeboer, who plays a standup bass, was dancing, almost deliriously, with his instrument and beaming from ear to ear.

Emerson, a nursing student with exceptional composure, showed stoic patience, continuing to play her fiddle with her usual cool as if the grandfatherly members of the group were just going about their usual business of performing on stage rather than being immersed — and perhaps swept away — by the moment.

What the group didn’t realize, though, was that the highlight of the night was still to come.

It happened during their last song, “Orange Blossom Special,” which tells the story of a train with the same name. Also popularly known as the “fiddler’s anthem,” the song picks up speed with each turn of the tune. Fittingly, Emerson took her fiddling to a new level with it, amidst clapping and cheering.

“She set the crowd on fire,” Meyer said.

Their newfound German fans would not let them leave the stage, shouting, repeatedly, in English, “One more song.”

And all this excitement in just half an hour.

While the current iteration of the band has been in existence for just nine years — Emerson started playing with them as a seventh-grader — the two Jims have ridden horses and played music for over 30 years.

Growing up in Waverly, they knew each other, but started hanging out after a campout at Southeast Elementary, where Gates and Judy Meyer taught.

Playing around the campfire for the kids and the families, Gates and Jim Meyer musicians realized they shared a love for the wild West, and a lifelong friendship was forged.

Nine years ago, Wildeboer, a self-taught bass player and a retired helicopter pilot and instructor, pitched the idea of adding a bass to the duo, winning them over in an audition. With Emerson’s arrival, about the same time, the band was complete.

Since then, the Double J Wranglers have become staples at fairs and churches in northeast Iowa, developing a loyal following not just for their concerts, but also for cowboy church, a religious service, blending faith and music, which has won them popularity and praise.

In Eisenach, they also performed on Saturday night, at a packed bar.

“You could not have shoved another person it,” Meyer said.

After the gig, Emerson was whisked away in a car, to another venue, to play with a Danish folk singer, whose music she had just heard for the first time.

The rest of the band went to that performance, and they were not surprised by how flawless Emerson and the singer performed. Audience could never have guessed that Emerson had had only a few minutes to learn the music.

Afterwards, the Double J Wranglers went to an after-party gathering at the warehouse where they had played on Friday.

“We have never signed so many autographs, people wanted to have their pictures taken with the Double Js, and we let them wear our cowboy hats,” Meyer said.

The party, which started at midnight, went until 4 a.m.

“It was late for old cowboys, but not for Claire, and the old cowboys can still stay up until the cows come home,” Meyer said.

The experience was an eye opener for the group in terms of travel. Meyer had lived in the Netherlands as a young Army man in the late 1960s, Gates had traveled to Scotland years ago, but it was the first overseas trip for the Wildeboers, Diane and Judy, not to mention Emerson, who had never been on an airplane before.

In Eisenach, the band and their loved ones were surrounded with great hospitality. Each morning at the guest house, where several of the members were staying, the landlord’s mother brought coffee, pastries and sausages for breakfast.

Language was no barrier for the Wildeboers, who stayed at a woman’s home, and neither was it for the hostess, even though none spoke the other’s language.

“They formed a very strong bond in a very short time,” Meyer said.

Gates and Diane also felt right at home with their hosts.

The trip was made possible by the City of Eisenach in conjunction with the Sister City group in Waverly.

“We are eternally grateful for everyone who helped make this trip possible,” Meyer said. “We can’t wait for some Eisenach citizens to come to Waverly so we could return the tremendous hospitality that we experienced.”

“It was such a humbling experience,” she said. “Nothing short of a trip of a lifetime. I never expected to across an ocean, let alone with a person from a different country. You can’t put a price on something like that. I am extremely thankful to everyone who support us on making the trip possible. The memories will be with us for the rest of our lives.”

Summing up the experience, Meyer said: “I like to reckon it like this: We went to Germany a cowboy band. In Germany, we were a humble cowboy rock band. And now, we are back in Waverly-Shell Rock, a cowboy band again.”