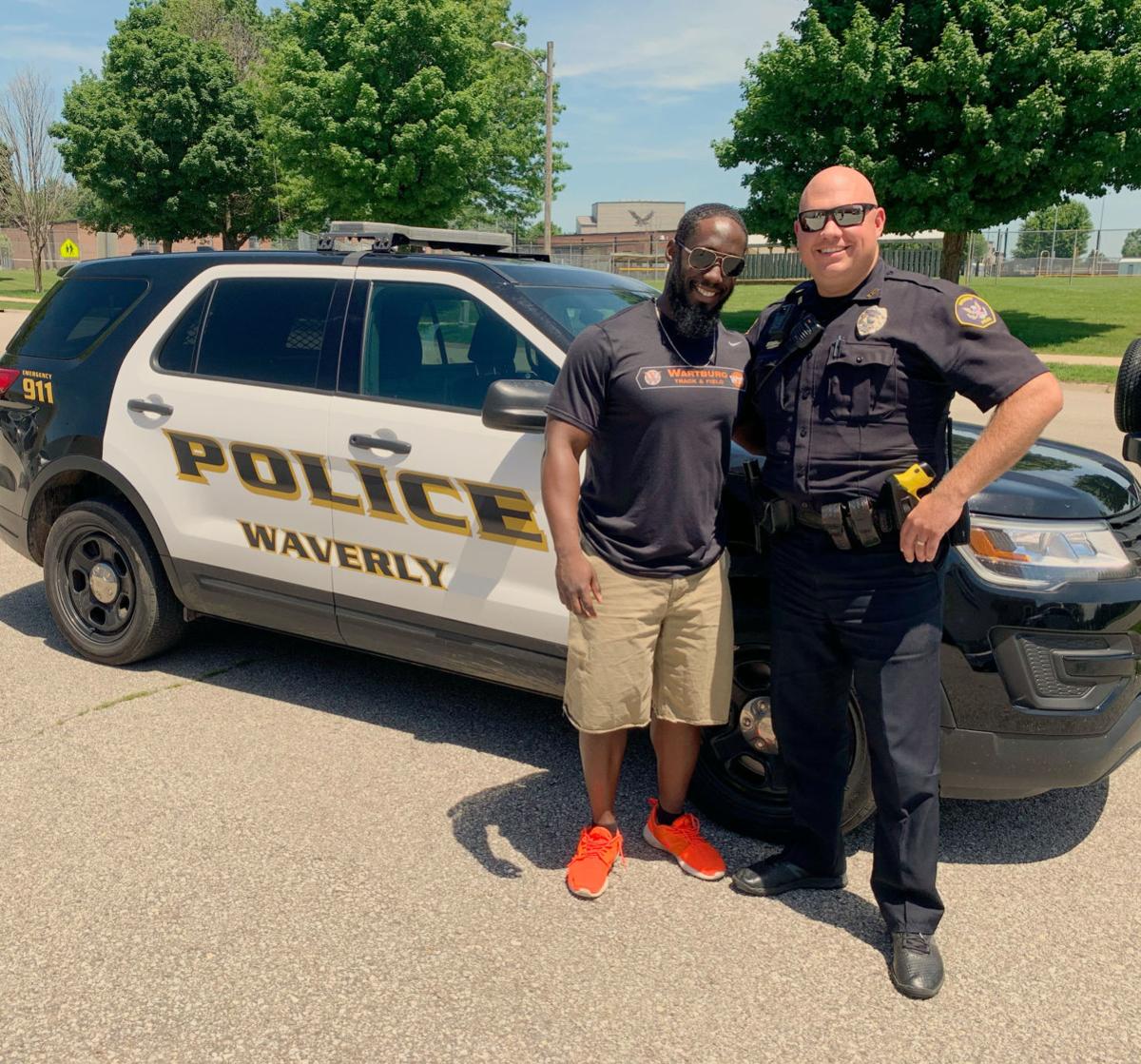 Marquis Stephens and Waverly Police Officer Cory Stephens pose in front of Officer Stephens’ squad car before their ride along. 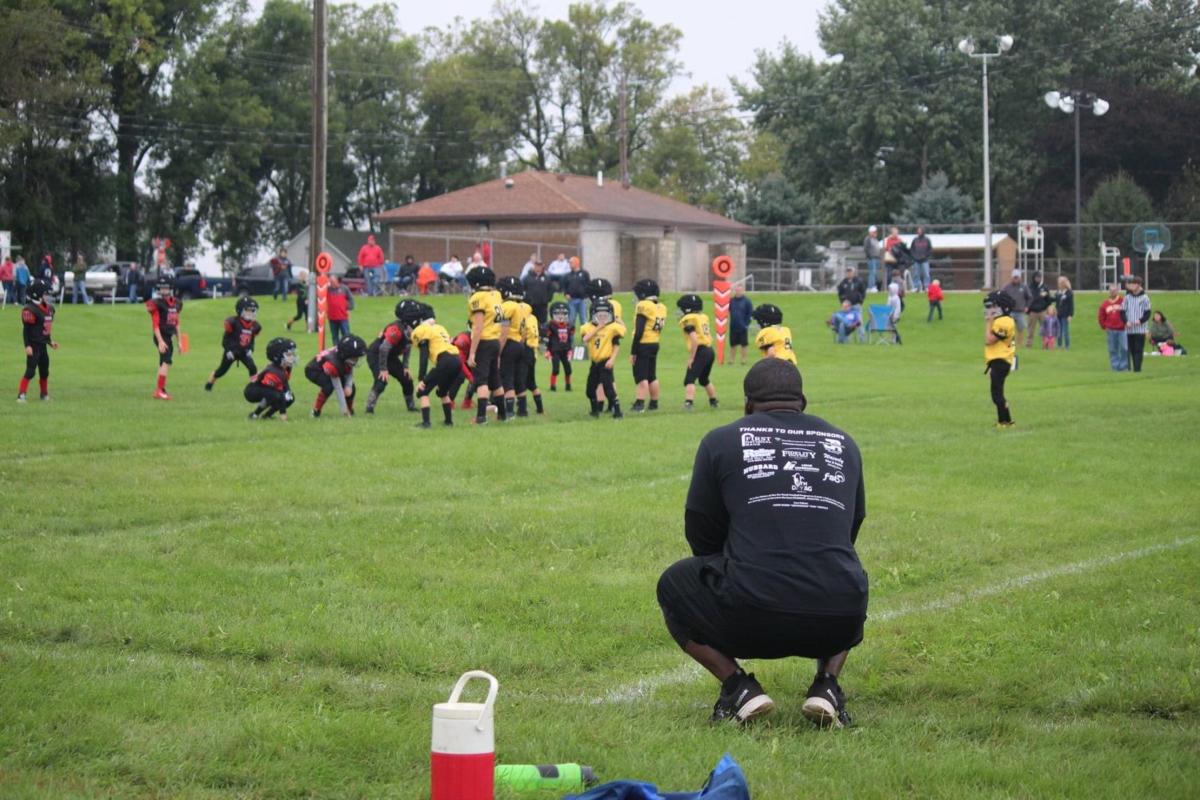 Marquis Stephens calls out a play to his football team during a youth game. 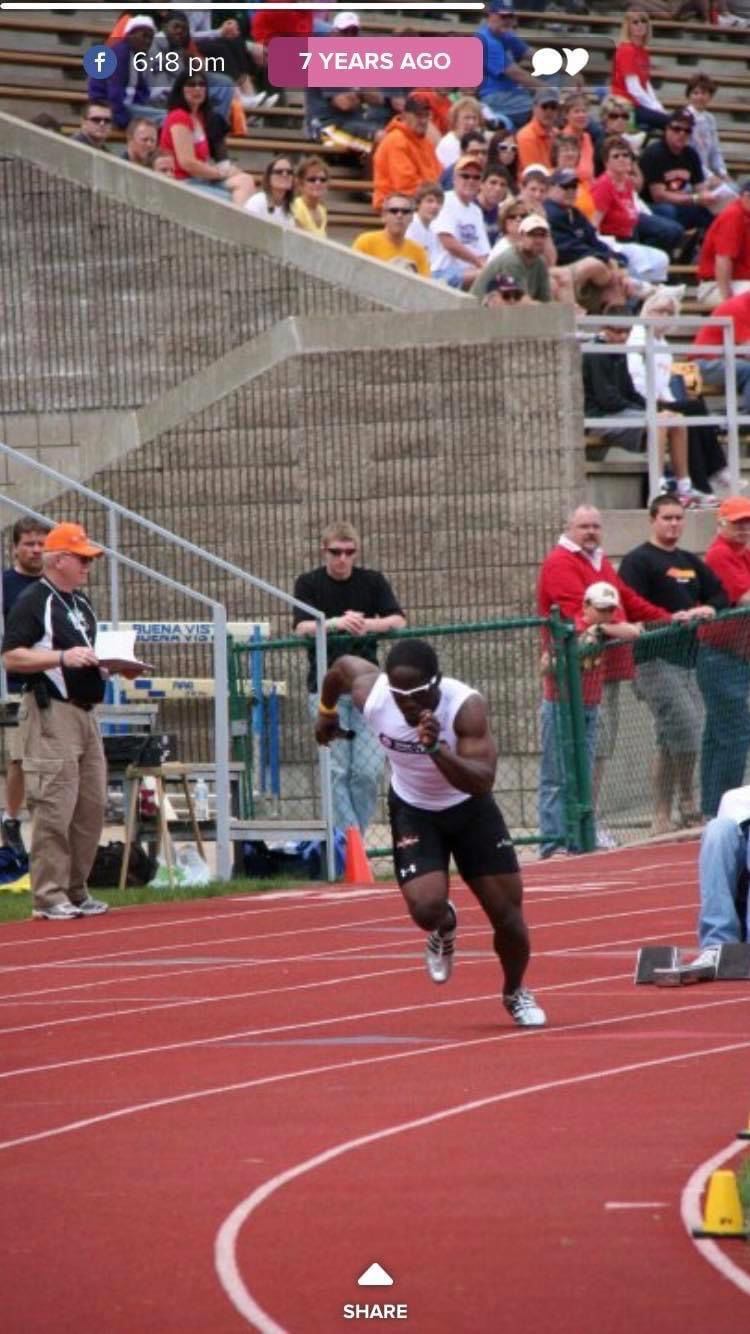 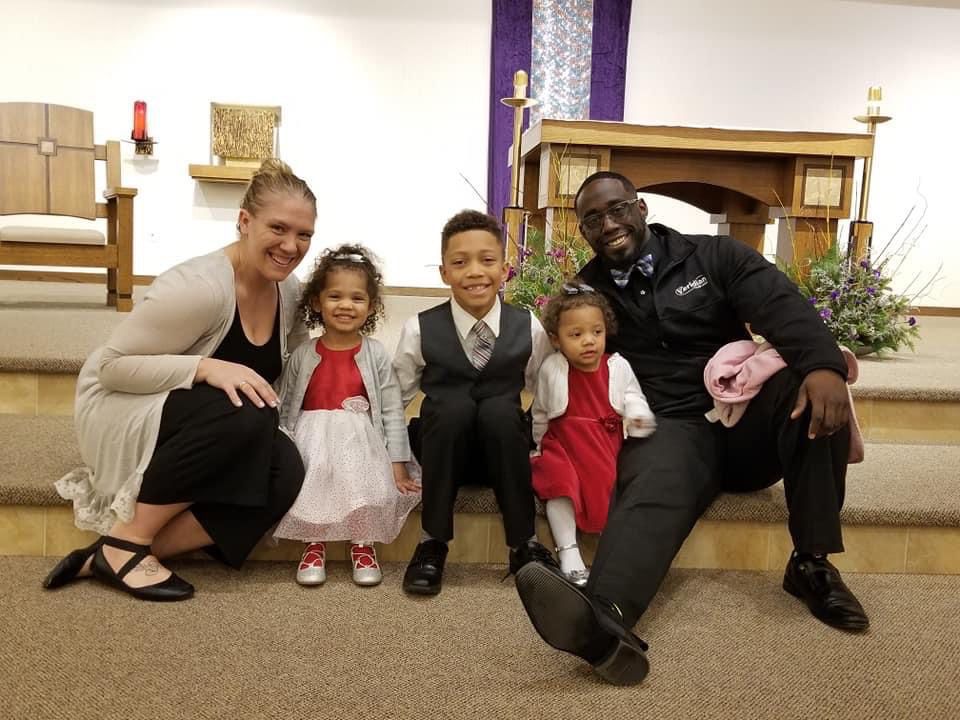 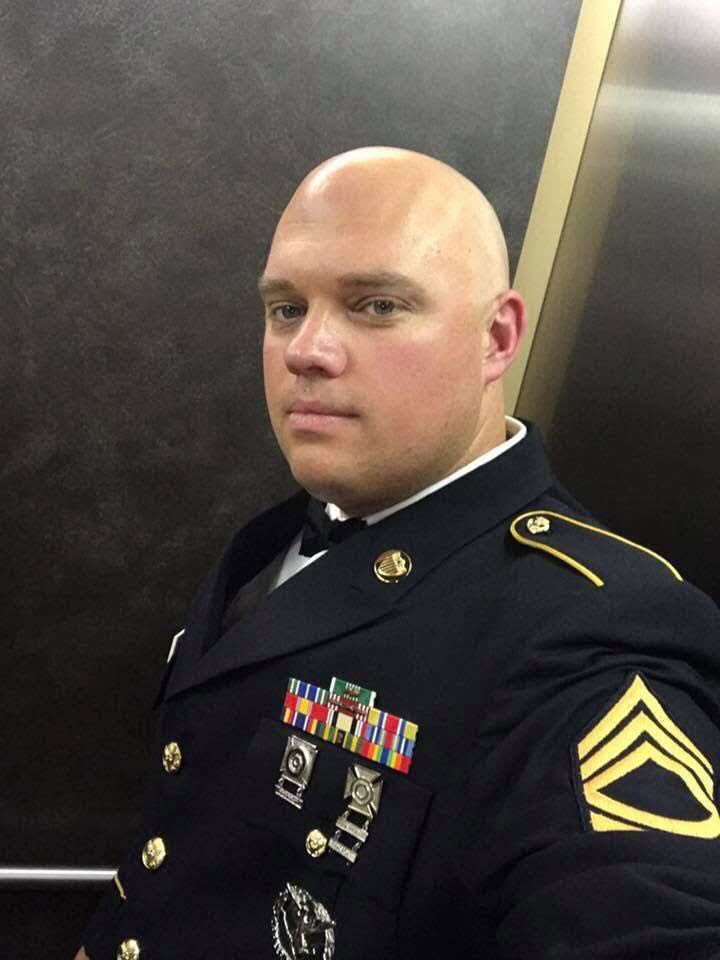 Cory Stephens served in the U.S. Army, including a stint in Iraq. 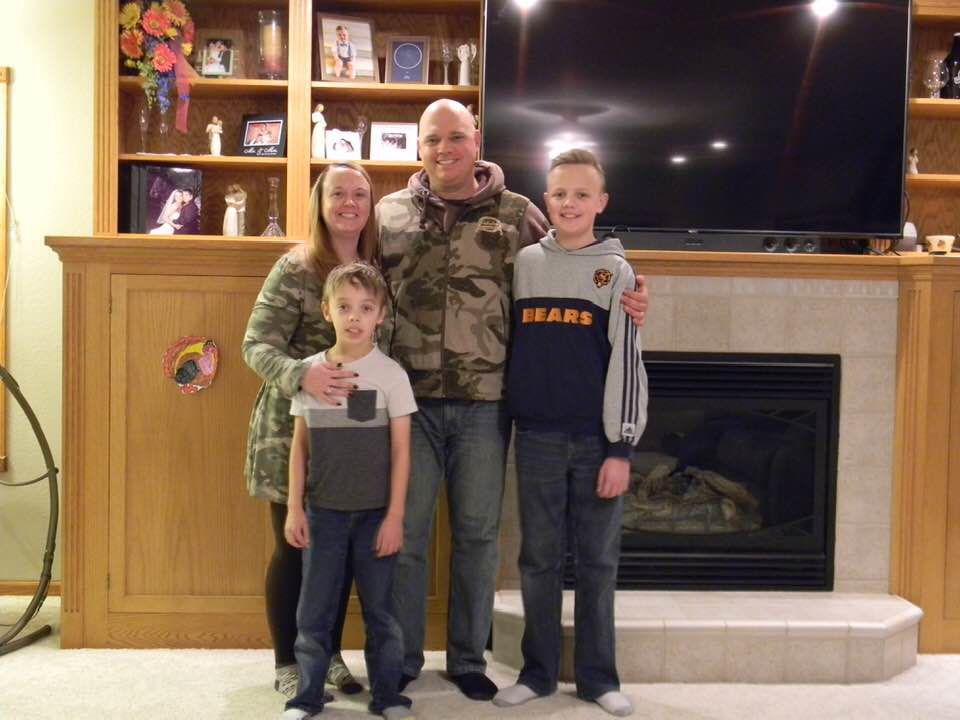 Above left: Marquis Stephens exits the starting blocks during his Wartburg College athletic career. Above: Cory Stephens, back left, poses with his family, wife Sara and sons Wyatt and Colton. Left: Cory Stephens served in the U.S. Army, including a stint in Iraq. 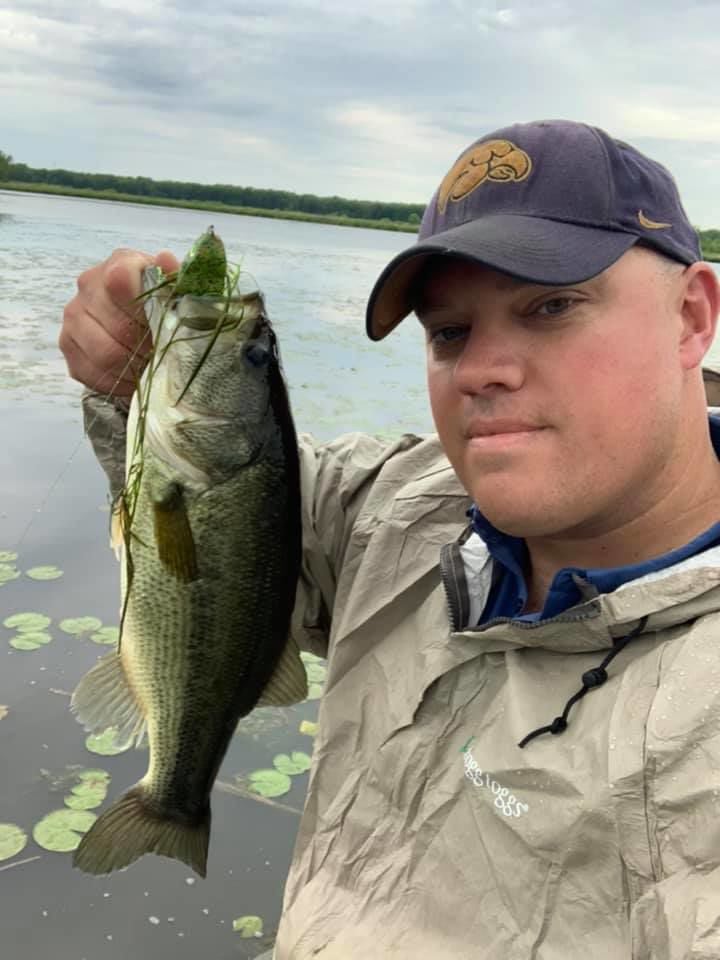 Marquis Stephens and Waverly Police Officer Cory Stephens pose in front of Officer Stephens’ squad car before their ride along.

Marquis Stephens calls out a play to his football team during a youth game.

Cory Stephens served in the U.S. Army, including a stint in Iraq.

Above left: Marquis Stephens exits the starting blocks during his Wartburg College athletic career. Above: Cory Stephens, back left, poses with his family, wife Sara and sons Wyatt and Colton. Left: Cory Stephens served in the U.S. Army, including a stint in Iraq.

They happen to have the same last name.

They are both dads to fifth-grade boys who played on the same baseball team.

They happen to like the same Mexican restaurant in town and even the same item on the menu — the fajita quesadilla.

But if it wasn’t for a five-hour ride along that Officer Cory Stephens, of the Waverly Police Department, and Marquis Stephens, a business professional at Veridian Credit Union, shared this Saturday, they wouldn’t have known that they have a lot more in common than just last names, fatherhood and gastronomy.

In the aftermath of the death of George Floyd, who died on May 25 while in the custody of Minneapolis police, and the ensuing global demonstrations for racial justice, Marquis decided to reach out to Cory because he trusted the officer and wanted to make sure he does not feel targeted at a time when a lot of narratives, especially on social media, frame police officers as the enemy of the Black community.

“That’s not the way it should be,” Marquis said. “One of the reasons I reached out to Cory is because I value Cory, I respect Cory.”

That respect is mutual and the gesture paid off for both men, they agree.

Cory, a veteran who served in Iraq in 2003, and joined the police department in Waverly in 2008, said he was touched by the outreach.

He, too, trusted Marquis, as he was his loan officer when the policeman applied for a boat loan.

When two men finally met for the ride along on Saturday, Cory skipped the typical walk through the police department headquarters that such ride alongs entail, and they got right into the squad car.

They had important things to discuss.

In his 12 years on the department, Cory estimates he had given about two dozen rides, mostly to friends, family, some Wartburg students and most notably, to Rod Blum, the former Congressman who represented Iowa’s 1st District, a post now held by Abby Finkenauer.

Cory said before the ride along, he prayed to figure out how to make the conversation productive.

Marquis grew up in Lisbon, Iowa, a town of about 2,100, mostly white residents. His big brother, Derek, two years his senior, was his role model. Wartburg track and field coach Marcus Newsom heavily recruited Derek to the program at the college, and now he is the head track coach at Mount Mercy University in Cedar Rapids. When it was time for Marquis to consider college, Coach Newsom was just as interested in him. That’s how he landed in Waverly in 2006.

Cory, on the other hand, grew up in Evansdale, but his high school experiences at East High in Waterloo exposed him to more diversity than was available in his hometown. The military, too, deepened his perspective on working with different ethnicities and backgrounds.

Some years ago their paths crossed and not in the most comfortable of ways. It so happened that Cory was the responding officer to a residence where Marquis was present, and the way the officer handled the situation, earned him Marquis’ respect.

“He treated me like a human being,” he said.

Cory’s professionalism took him somewhat aback, as Marquis said he had come to distrust the police.

“I felt being racially profiled in a small town, I have felt like this for years, so I stay at home,” he said.

Growing up, he does not specifically recall having “the talk” with his mother, a conversation many Black parents have with their children about how to stay safe in interactions with law enforcement, but many of his friends had shared unsettling stories, which amplified his fears and suspicions.

So as the Black Lives Matter movement picked up speed, Marquis decided to reach out to Cory and take an active part in bridging the divide.

On the surface, the ride along went uneventfully. The officer was called to only one incident, which in itself is telling of the kinds of calls officers respond to in Waverly in most cases.

In this case, someone spotted a woman in a wheelchair on the Bremer Avenue Bridge who appeared to be crying, so they called the police.

By the time Cory and Marquis got there, Officer Tony Krull, with whom they had chatted over lunch at El Sol, had already responded to the call, so he waved them away.

Turns out the concerned citizen may have misconstrued the tears they saw, as the woman who was shedding them told Officer Krull these were tears of joy, as she had just found out she was going to be a grandmother.

But the outside uneventfulness of the ride was in deep contrast with the candid conversation going on inside.

The two men hope their first talk about race, diversity and the workings of the police department would lead to positive developments.

Among the ideas they discussed is meeting with the incoming college students at Wartburg and Coach Newsom, and explaining the workings of the department so that young people’s first interaction with the police is not at a traffic stop at 3 on Saturday morning.

They also talked about diversity on the police force, and how having officers who themselves come from diverse backgrounds would strengthen the community, as those who work in the department, also live in town.

“One of the things I took away from it, is that they can bring experiences that they have had in their childhood and family interactions,” Cory said of the listening to Marquis’ story.

“Regardless of how I do my job, there’s still going to be an uneasiness that they are going to have around police officers, but it doesn’t have to be something that divides us.”

Cory added being more empathetic as a police officer can pay off in terms of building trust, especially in a town where community policing is practiced.

“There is a time to listen and a time to act,” he said. “If I can show compassion, look what that created, it gave us a talk at the baseball field, it gave us a chance to shake hands at the Veridian Credit Union office.”

Both men said they were glad they had the opportunity to speak candidly. Cory especially appreciated the fact that Marquis had a full slate of family obligations that weekend, including his daughter’s dance recital, but still kept the date of the ride along.

They say action is their next step, as even the best ideas shrivel in the lack of action.

And having initiatives emerge from the ground up, like this ride along yielded, is quite possibly the only way to implement real, meaningful change, they agree.

“We share something as simple as a last name but that can be very powerful,” Marquis said. “A white cop and a Black citizen, viewing each other equally, no differences between us, just like there’s no difference in our last names.

“I don’t want to hold a grudge any more,” Marquis continued. “I want to grow and I want to change and the only way to do this is to step out of the comfort zone and seek out that change, that’s when real change happens.”

Except for a few afternoon clouds, mainly sunny. High 91F. Winds SSW at 5 to 10 mph.