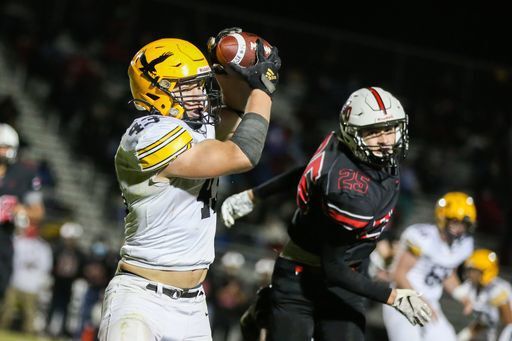 Waverly-Shell Rock sophomore McCrae Hagarty catches a pass during a Class 3A first-round playoff game at Western Dubuque on Friday, Oct. 16, 2020 in Epworth. 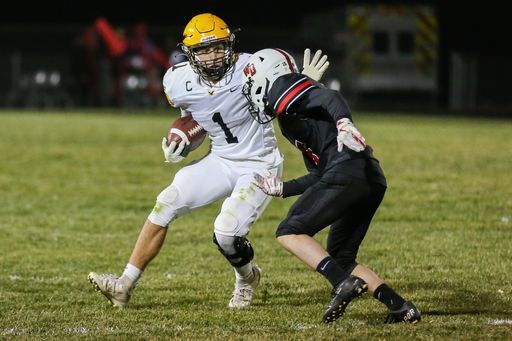 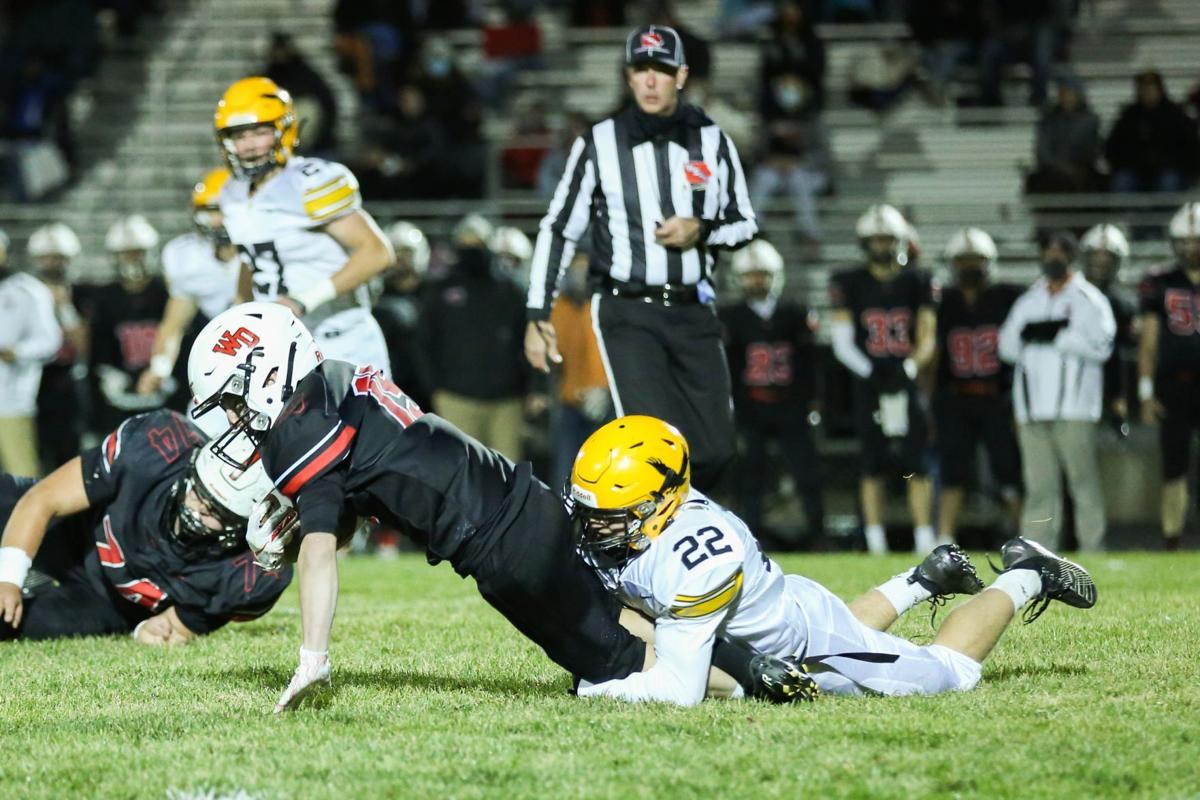 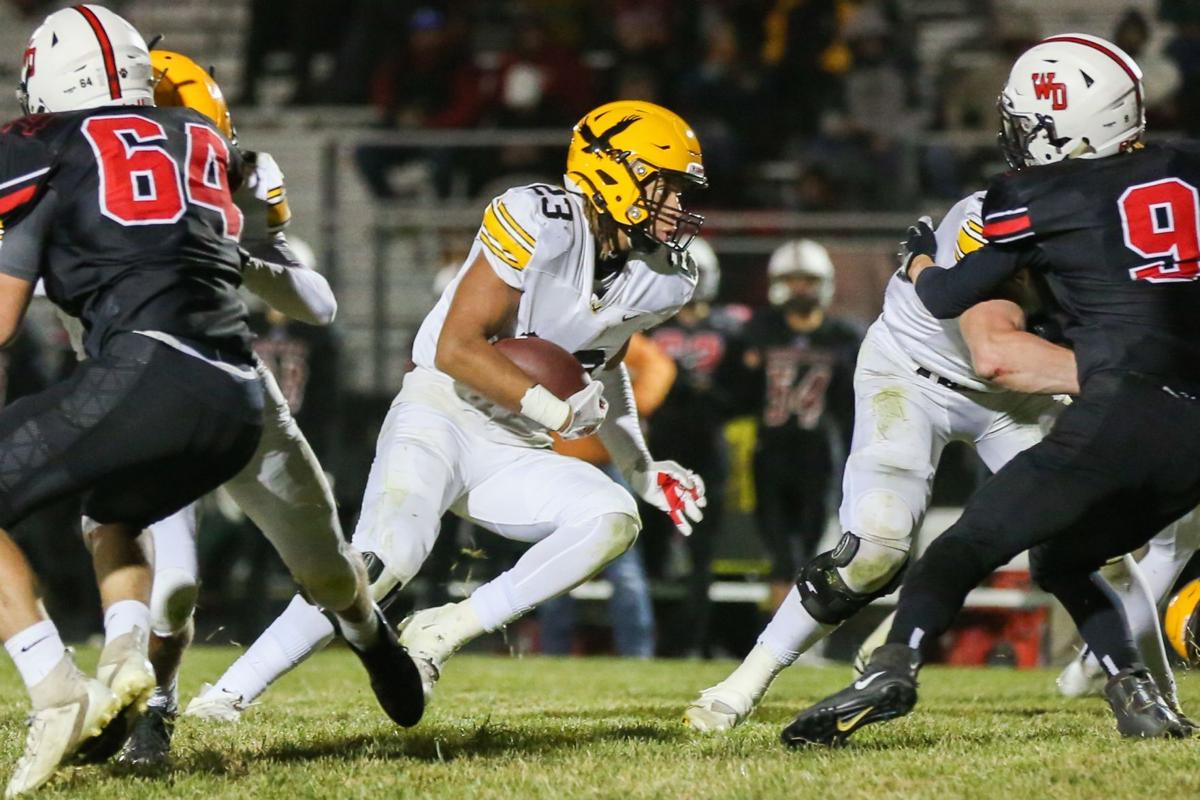 Waverly-Shell Rock sophomore Asa Newsom runs up the middle during a Class 3A first-round playoff game against Western Dubuque on Friday, Oct. 16, 2020 in Epworth.

Waverly-Shell Rock sophomore McCrae Hagarty catches a pass during a Class 3A first-round playoff game at Western Dubuque on Friday, Oct. 16, 2020 in Epworth.

Waverly-Shell Rock sophomore Asa Newsom runs up the middle during a Class 3A first-round playoff game against Western Dubuque on Friday, Oct. 16, 2020 in Epworth.

EPWORTH – Waverly-Shell Rock believed the outcome would be different.

After battling against defending Class 3A state champion Western Dubuque in Week 2, W-SR was confident it had more to give.

After learning so many lessons during this roller-coaster season – one which logged more travel miles than in recent memory – W-SR knew it had the ability to fit all the pieces together.

After stunning Decorah, W-SR spoke about how it wanted to use that win as a springboard into the postseason, not for it be it's mountaintop.

Nothing went right the second time around against the reigning champs. Garrett Baumhover threw for four touchdowns, Spencer Zinn ran at will and Western Dubuque rolled to a 47-21 win in the first round of the Iowa High School Athletic Association Class 3A playoffs at Buchman Field on a frigid mid-October Friday night.

W-SR finished 4-4 overall, including 3-2 in District 3, which proved to be one of, if not the toughest, districts in Class 3A.

Western Dubuque racked up 516 yards of total offense and averaged more than 11 yards per play.

“We played our hearts out and we tried our best, and sometimes things just don’t go your way,” W-SR senior Donovan Wessel said. “That’s what happens. That’s the game of football.”

The game was brutal to the Go-Hawks on Friday.

After going through the gauntlet of district play – one that featured the likes of the Western Dubuque, West Delaware and Decorah, who went a combined 17-5 in the regular season – W-SR’s drew Western Dubuque in the first round of the Class 3A playoffs.

For the second time in exactly one month, the Go-Hawks made the trek to Epworth.

The result was much the same.

After studying the film from the first matchup against the Baumhover and the quick-striking Bobcats’ offense, the Go-Hawks spent much of the week preparing against the pass. They emphasized getting in the backfield and pressuring Baumhover, who is quick to release the ball whenever he throws it.

W-SR was able to pressure the Western Dubuque standout quarterback. But not enough.

The visitors’ second possession of the game spelled trouble. Brady Ramker was hit in the backfield before he could hand the ball off to McCrae Hagarty, the ball bounced to the turf and the Bobcats recovered at the Go-Hawks’ 36-yard line.

A false start penalty pushed Western Dubuque back five yards, but Baumhover hit a wide-open Dakota Lau for a 41-yard touchdown with 4 minutes, 48 seconds left in the first quarter to give the defending champs a 7-0 lead.

Baumhover completed three passes of 41 or more yards, including a second 41-yard touchdown toss to Lau in the third quarter to ice the game.

“A lot of them were broken plays,” said Go-Hawks senior Jack Kramer, who finished with seven tackles and recovered a fumble. “Our DBs did a good job. There was just a little bit of miscommunication on some of them.”

Realizing W-SR was guarding against the pass, Western Dubuque turned to Zinn.

Two holding penalties threatened to stymie the Bobcats’ following drive, but Baumhover hooked with go-to receiver Tommy DeSollar for a 19-yard touchdown for a 20-0 lead with 8:21 remaining in the first half.

Already staring at a big deficit, the Go-Hawks went for it on fourth-and-8 from the Bobcats’ 45 midway through the second quarter. But Ramker’s pass intended for tight end Layne McDonald was intercepted by DeSollar. Minutes later, Zinn found the end zone for the third time, this one from 7 yards out to push it to 27-0 Bobcats with 3:29 left before the break.

“They’re a great football team,” W-SR head coach Mark Hubbard said. “We didn’t get off to the best start, and credit to our opponent. We battled a little bit here and there, but ultimately they just made some huge plays.”

Desperate for points, the Go-Hawks finally got on the board in the waning minutes of the half. Ramker hit Ryan Folkerts for a 10-yard touchdown to cut it to 27-7.

The late touchdown handed the Go-Hawks the momentum they sought from the opening kickoff.

W-SR used it to its advantage to open the second half.

When it looked like Western Dubuque’s offense couldn’t be stopped, W-SR made a defensive stand. It forced a three-and-out and Western Dubuque lost 4 yards on three plays.

Hagarty made the Bobcats pay. The Go-Hawks’ sophomore running back ran it three straight times, his third attempt a 3-yard run into the end zone to make it 27-14.

Until late in the second quarter, the Go-Hawks didn’t appear to have much life or energy. That changed in a hurry.

That energy was zapped with one flick of the wrist.

Five plays later, Baumhover lofted a 41-yard bomb to Lau for a 34-14 lead with 4:59 remaining in the third quarter. Lau snagged three catches for 93 yards and two touchdowns.

“He’s a good receiver,” Hubbard said. “We had some miscommunication in the secondary a few times that he was able to get free.

Baumhover struck again later in the third, this time he threw a 76-yard touchdown pass to DeSollar for a 40-14 lead.

W-SR recorded 428 yards of total offense, but it couldn’t match up with Western Dubuque.

The Go-Hawks graduate around a dozen seniors, including Ramker, as well as starting offensive lineman Cade Carpenter and Cade Williams, all-around talents Jonathan and Donovan Wessel, along with a handful of others. Yet they return a solid core of starters ripe with talent.

As grim as Friday night turned out to be, the horizon is bright.

“For our underclassmen, now we’ve got to turn all that potential into performance,” Hubbard said.

Cloudy early with peeks of sunshine expected late. High near 50F. Winds NNE at 5 to 10 mph.

Rain early with thunderstorms developing in the afternoon. High 59F. Winds ESE at 10 to 20 mph. Chance of rain 100%.