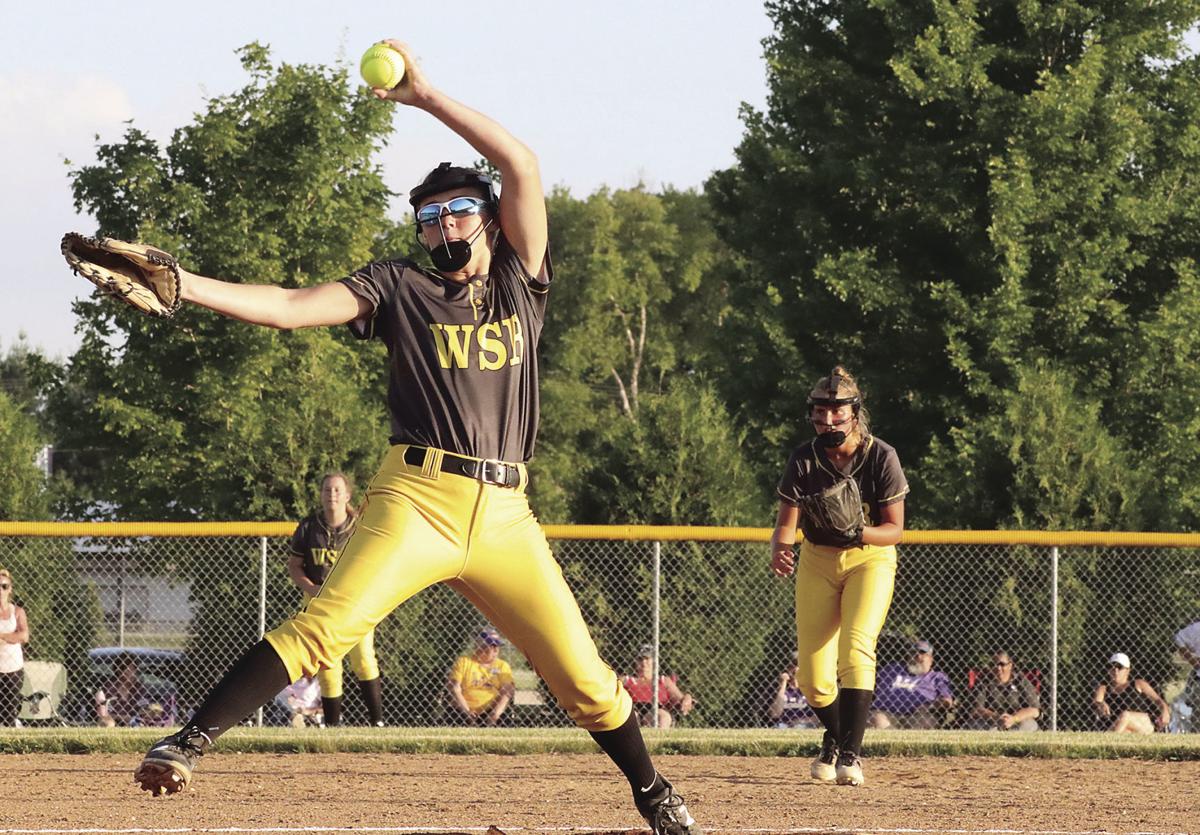 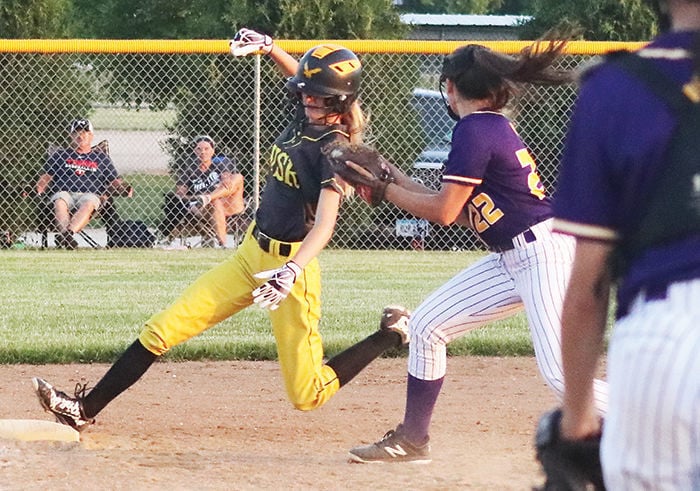 OELWEIN — It has been a long time coming, but on Monday night the Oelwein Huskies softball team defeated Waverly-Shell Rock, 4-3, with patience and an overpowering pitcher.

Pitchers Kennedy Lape for the Huskies and Marley Hagarty for the Go-Hawks, both juniors, traded strikeouts throughout the game, with the edge going to Hagarty in the end with 14 to Lape’s 13. However, Lape walked no one. Hagarty gave up 15 walks, according to Oelwein statistics. Waverly-Shell Rock’s score sheet shows 14.

The Go-Hawks scored three runs on four hits against Lape, although only one was earned. The Huskies defense committed three errors. The one earned run was off a single by junior shortstop Alandria Trowbridge.

“Defensively, we could have played a little better,” said Oelwein head coach Bob Lape. “We made some errors that hurt us, but, you know, we hung in there, we stuck with it.

Oelwein loaded the bases in the bottom of the first, third and sixth innings.

In the bottom of the first, Wegner, Lape, and freshman Emma Smock each walked. With two outs, Kunkle drew a fourth walk, scoring the game’s first run.

Waverly-Shell Rock tied the game up in the top of the second inning. Eighth-grader Maya Willey led off by getting on base on the Oelwein left fielder’s error on a fly ball. With two outs, she scored on Jenna Willey’s double.

The Go-Hawks took the lead in the top of the third when a pair of errors by Oelwein’s left side of the infield scored Hagarty. She had gained first on an error at short, stole second base and scored when junior Lindsey Miller made it to first because of an error by the third baseman.

Oelwein tied the game in the bottom of the third after Lape walked, Smock hit a single, and Kunkle walked. Prouty drew a one-out walk to score Melchert, running for Lape.

The G-Hawks took the lead one more time in the fourth. Junior Kelsey Wheeler led off with a double and scored on a sacrifice fly to center field by Alandria Trowbridge.

In the bottom of the sixth, junior Naomi Goede led off with a walk and stole second. Then Lape and Smock walked to load the bases. Kunkle and Prouty each pushed across a run by getting walks.

“We just hung in there and kept playing solid ball,” Lape said. “We didn’t do anything real poorly. We can fix some of the mistakes – the physical mistakes that we can fix.

“We had a long week last week,” he added. Oelwein played four games Tuesday through Friday, losing them all, before taking the weekend off. “It was kind of nice for the girls to get a couple days off, get refreshed a little bit. It’s just a nice overall win for the program.”

Waverly-Shell Rock head coach Heather Zajicek said her team came out and put the ball in play against a great pitcher.

“It was a back-and-forth affair,” said Zajicek. “The strike zone, both ways for us defensively and offensively, was challenging for us to figure out — what was a strike and what was a ball — but nonetheless, I mean, that’s part of the game. And certainly, you know, there are things we knew we needed to control and at times we did put pressure on them.”

“We’ve seen great pitching thus far and she’s definitely a great addition to the Oelwein squad. I don’t want to take anything away from her, she’s a great pitcher. She works hard works hard has a really nice change up.”

The Huskies improved their overall season record to 3-4, while the Go-Hawks dropped to 1-5.

The last time Oelwein defeated Waverly-Shell Rock was Thursday, July 4, 2008, taking the second game of a doubleheader. The winning pitcher was sophomore Alex Jipson who went all seven inning giving up six hits, two runs — only one earned — walking one and striking out three.

The win also was Oelwein head coach Bob Lape’s 650th. He is in his first year with Oelwein, but was the long-time coach of North Fayette prior to joining the Huskies as the varsity football and softball coach.

The Go-Hawks continued their slate Tuesday with a trip to New Hampton, falling to the Chickasaws, 5-2.

According to stats provided to Varsity Bound by the Chickasaws’ coaching staff, Keirsten Tenge got the win in the circle for New Hampton, allowing six hits and two earned runs in the complete-game effort with two walks and three strikeouts. Meanwhile, Kacey Olson had a home run and three RBIs in her 2-for-3 effort.

Statistics for the Go-Hawks were not yet available by Wednesday morning. They next faced Decorah at home on Wednesday night, followed by a trip to Cresco to face Crestwood on Friday.