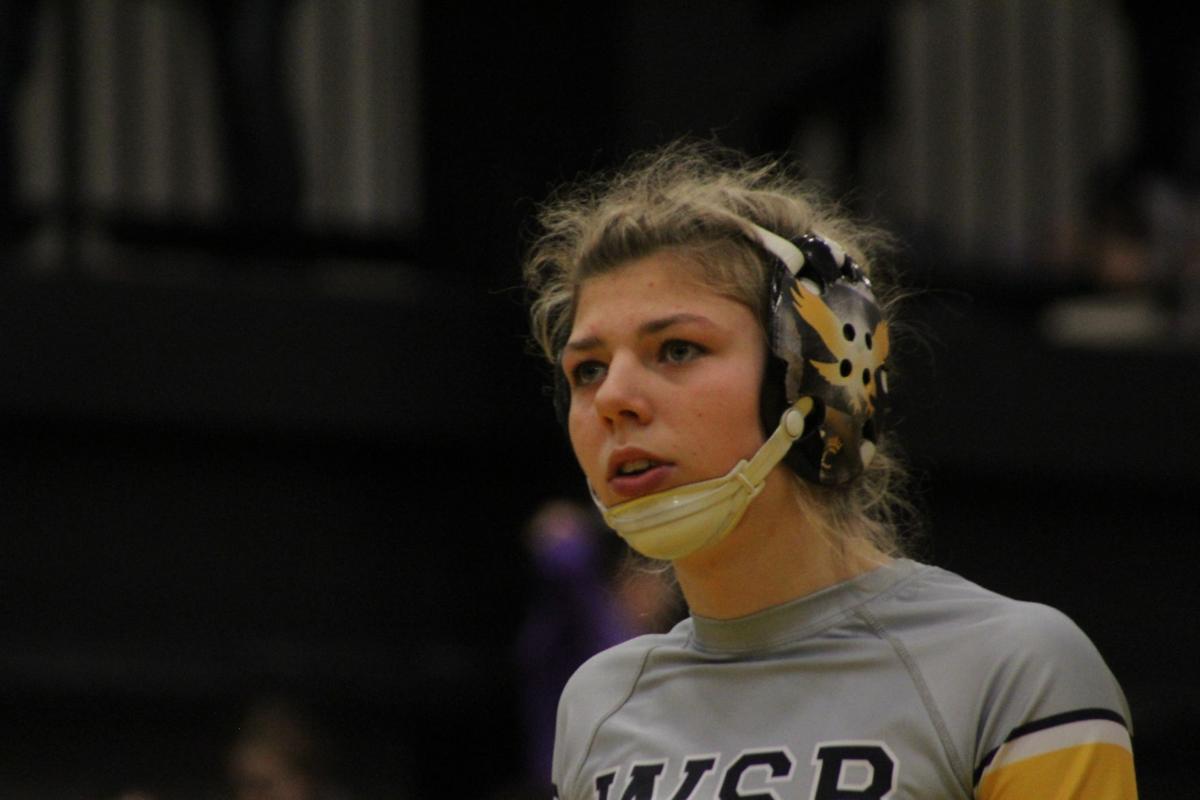 Above left: W-SR sophomore Annika Behrends prepares for her 132-pound state title bout with Glenwood’s Abby McIntyre on Saturday in Waverly. Above right: Waverly-Shell Rock junior Macy Smith, middle, battles for a loose ball during a basketball game against Decorah on Friday, Jan. 15, 2021 at Go-Hawk Gymnasium in Waverly. The Go-Hawks won the game 48-36. 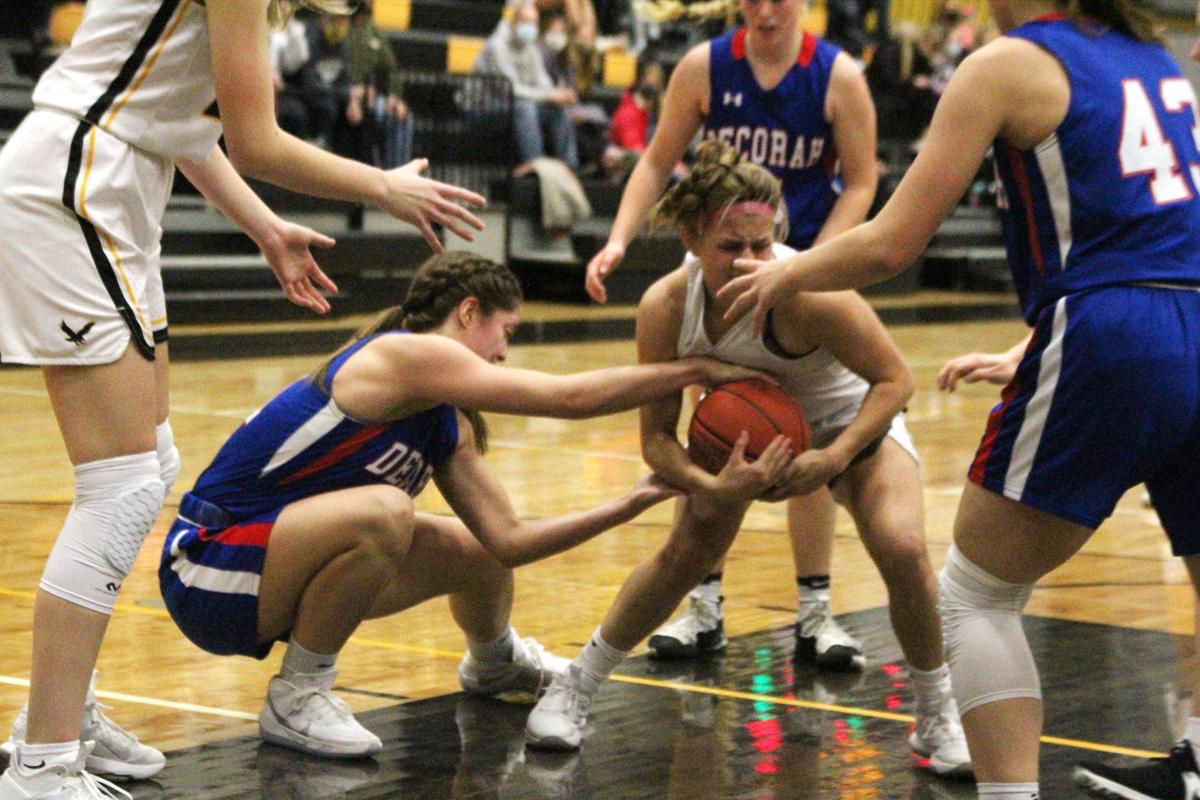 Waverly-Shell Rock junior Macy Smith, middle, battles for a loose ball during a basketball game against Decorah on Friday, Jan. 15, 2021 at Go-Hawk Gymnasium in Waverly. The Go-Hawks won the game 48-36. 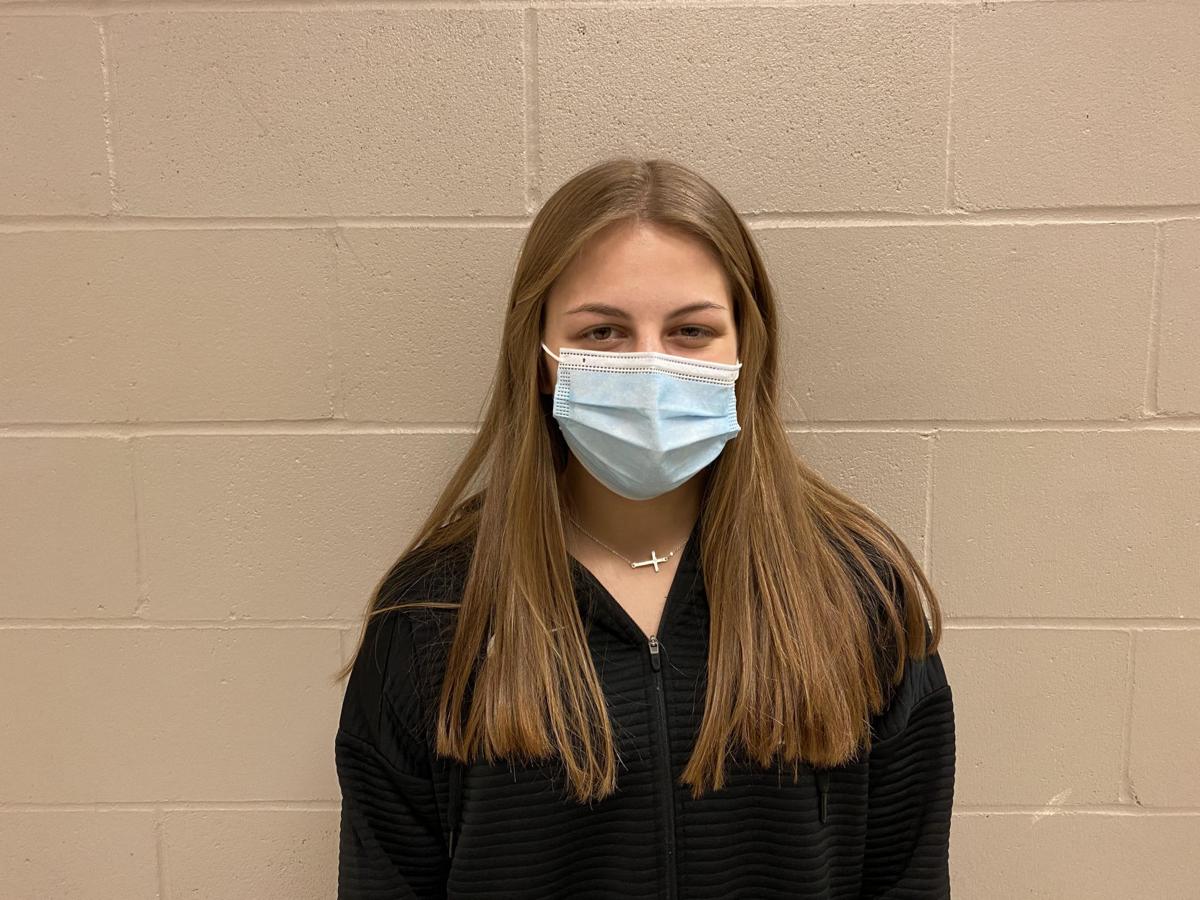 Above left: W-SR sophomore Annika Behrends prepares for her 132-pound state title bout with Glenwood’s Abby McIntyre on Saturday in Waverly. Above right: Waverly-Shell Rock junior Macy Smith, middle, battles for a loose ball during a basketball game against Decorah on Friday, Jan. 15, 2021 at Go-Hawk Gymnasium in Waverly. The Go-Hawks won the game 48-36.

Waverly-Shell Rock junior Macy Smith, middle, battles for a loose ball during a basketball game against Decorah on Friday, Jan. 15, 2021 at Go-Hawk Gymnasium in Waverly. The Go-Hawks won the game 48-36.

Annika Behrends and Macy Smith not only have shared a friendship that was forged in childhood, but one that continues to blossom through athletics.

Behrends and Smith aren’t ordinary student-athletes representing Waverly-Shell Rock in their respective sports. They are a different breed, built on a rare brand of mental and physical fortitude that shines bright.

Competing on the basketball court and the wrestling mat, Behrends and Smith have been stalwarts for W-SR in both sports, despite the many challenges each day brings – from rigorous practice schedules and the physical toll their bodies endure, to dividing up their hectic daily routines and having enough time to attend to their studies.

It’s a tall task that requires an abundance of strength, both mentally and physically. To endure such a grind is far from easy.

Yet Behrends and Smith have found a way to excel in both.

Wrestling is like religion for the Behrends family. Annika’s uncle, Brett, is an assistant coach for the W-SR boys team. Her father, Zach, helps coach the younger wrestlers in the W-SR program.

When Annika Behrends was 3 or 4 years old, she developed an interest in the sport. And her family has always been in her corner – whether it be her dad watching with a close eye from the balcony inside Go-Hawk Gymnasium or her uncle coaching her from the mat during each of the first two state tournaments.

“It’s a great experience,” Annika said of her father. “I know the lingo that he talks, and so I know exactly what he’s saying. He knows a lot about it, so then it also helps me connect.”

When girls high school wrestling held its inaugural season in 2019, Annika was the only freshman to go out for W-SR’s team. She set out on a journey to help grow the sport. Back then, there were less than 100 girls who registered. Last season, that number exploded to more than 300. When Annika competes at the state tournament, which begins Friday at Xtreme Arena in Coralville, there will be close to 500 participants.

“I was totally there for it,” Annika said. “I wanted to be a part of it. It was something brand new, and it was going to make history. I knew that that’s something I’d want to do.”

Annika, who has wrestled at 132 pounds throughout her high school career, was one of the first to win a state championship in 2019. She celebrated that monumental, historic moment in Go-Hawk Gymnasium, where the tournament was held the last two years, in front of her family and friends. It was a moment she will carry with her for the rest of her life.

She remembers that exact day quite well. She was as nervous as she has ever been, but she did her best to soak up the moment.

“My emotions, they were taking over my body,” Annika said. “… you had to take one step at a time. My dad and my uncle, they kept reminding me don’t have big goals; you have to take small goals and you have to complete those before you can jump to your big goal. Once I got my championship (match) and won that, I just remember running over and giving my dad a huge hug.

Annika placed second at state as a sophomore last season. She is looking for her second state title this weekend and carries a 6-0 record entering the tournament.

As much as Annika shines on the wrestling mat, she equally dazzles on the basketball court. W-SR is ranked No. 7 in Class 4A in the Iowa Girls High School Athletic Union’s Jan. 14 rankings. Behrends is averaging 7.3 points and 6.4 rebounds per game for W-SR, which is 11-2 on the season.

All of the success Annika has enjoyed in both wrestling and basketball has not come without hardship. She has experienced a fair share of tough times.

“It’s very, very challenging,” she said. “You have to be really strong. I’ve actually wanted to give up a lot of times, but I know if I keep going it’s going to help me, and I’m going to be in the better spot in the long run.”

Having Macy as not only a good friend, but someone who is going through the same thing on a daily basis, has been a comforting feeling for Annika. Monday’s wrestling practice, Annika said, was taxing. Annika and Macy left wrestling practice a few minutes early and then joined their basketball teammates for practice, which ended around 6 p.m.

“We were both tired and we knew we had to push through it,” Annika said. “You can’t complain because you choose to do both. You put yourself in that position, and you just have to know that you have to push through it.”

Macy Smith wanted to wrestle as a freshman in 2018, but she tore her meniscus in her right knee while playing club soccer and was not able to.

Like Annika, Macy has been around wrestling her entire life. Her father, Chris, is an assistant coach at Wartburg College. Her brother, Jace, wrestled in junior high.

When Jace passed away in April 2016 following a courageous battle with a rare form of mitochondrial disease, Macy made it her goal to do everything she could to serve her loving brother’s memory.

“I wanted to continue his legacy and continue it on in our family,” she said.

Macy went out for wrestling as a sophomore last season and placed third at the state tournament at 138 pounds. Every time she laces up her wrestling shoes and snaps on her headgear, Macy’s heart is full.

“I wrestle for him,” she said of her late brother. “I do everything for him.”

Macy carries an 8-0 record into this weekend’s state tournament and as she tries to capture a state championship, she knows her brother will be there watching over her with a bright smile, rooting her on.

“He would just tell me to do my best, and it doesn’t matter where I end up as long as I go out and wrestle and give everything I can in my ability,” Macy said of what her brother would have told her. “And I think he’d be proud.”

On the basketball court, Macy also has played a big part in the Go-Hawks’ success. She is averaging 5.2 points per game and leads the team with 36 assists and 28 steals. Having Annika by her side has provided an added boost as well.

“It helps that we both are very competitive, and we push each other every day to be the best that we can,” Macy said. “I think that just helps, especially in our friend relationship, too.”

Macy said the hardest part of competing in two sports during the same season is the physical toll she’s taken.

“After a while, your body starts to break down, but Destry (Sperfslage) does an amazing job and we have a lot of support to keep us going.”

As Macy gears up for the state tournament, taking a short break from basketball to do so, she will carry the memory of her brother with her.

“He’s my ‘why’ and why I participate in things,” she said.