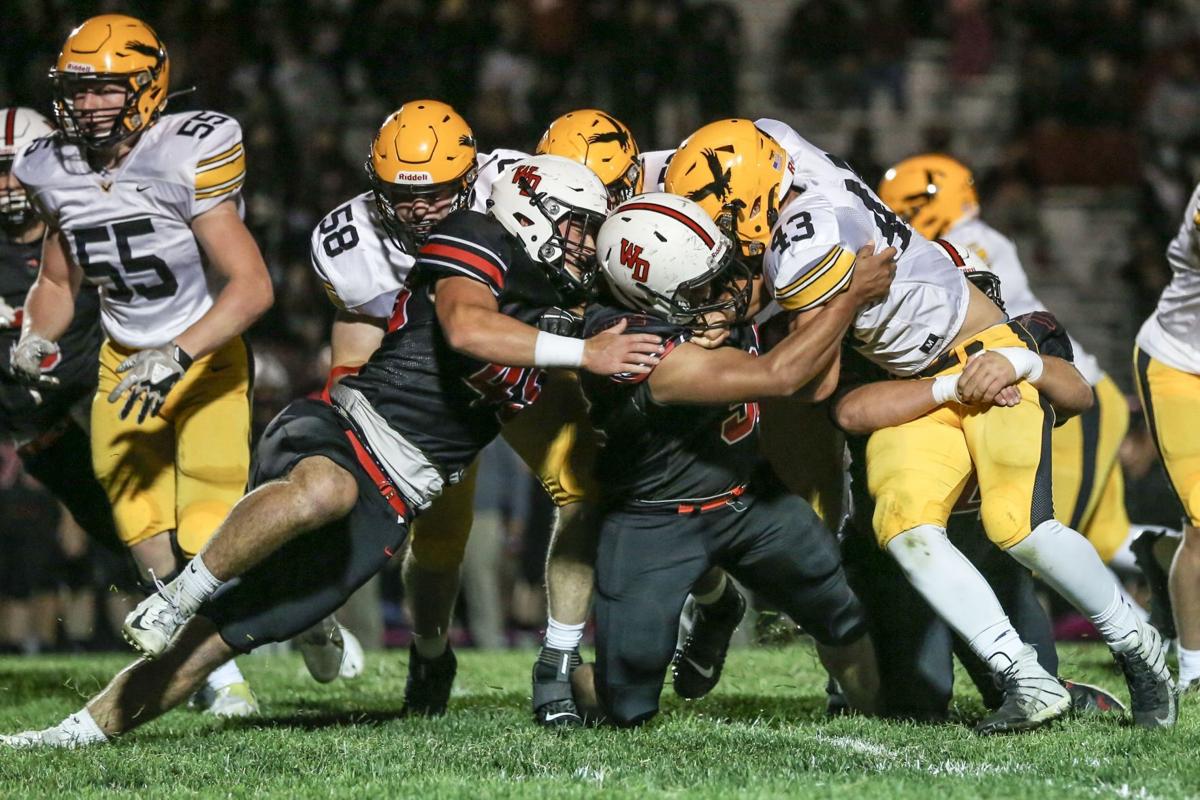 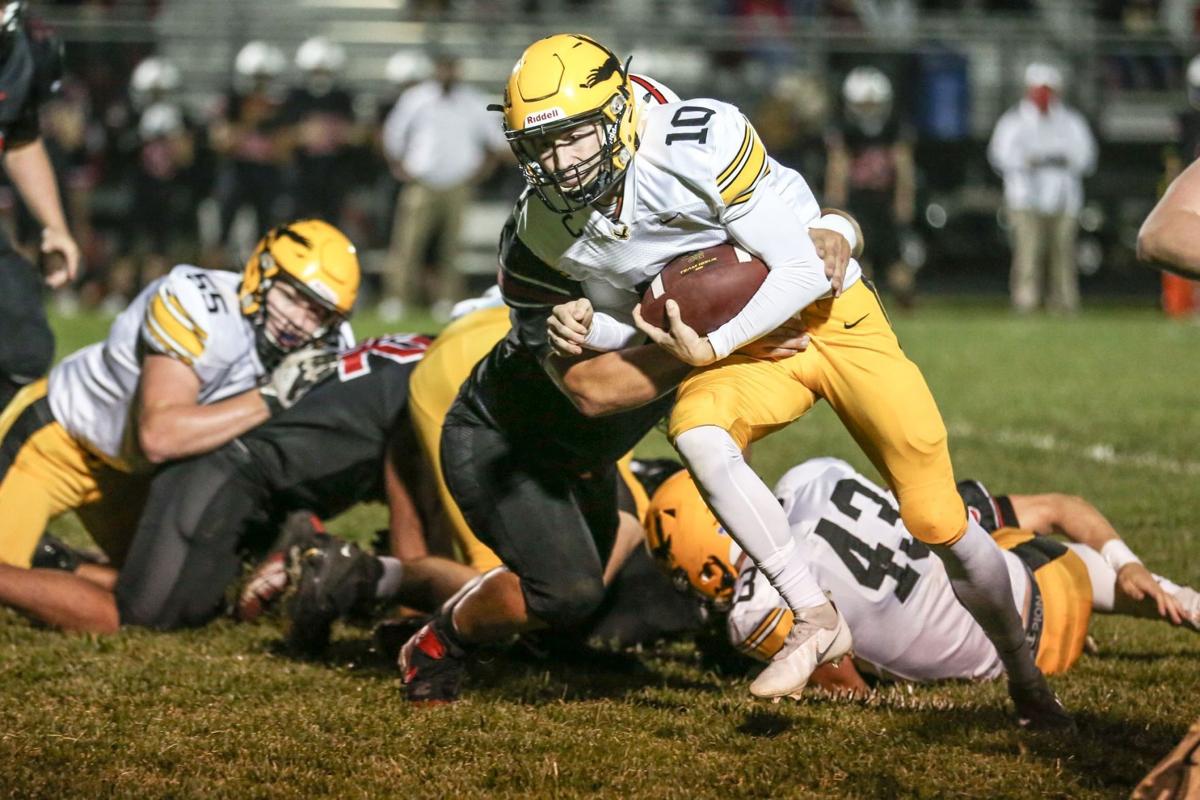 EPWORTH – One thing Waverly-Shell Rock has quickly had to learn in this truncated season is to play fast.

The Go-Hawks, with a handful of sophomores in the starting lineup, also have had to mature on the fly.

They have done both. They learned another valuable lesson Friday night: to fight back.

W-SR did its best to limit Garrett Baumhover and defending Class 3A state champion Western Dubuque. The Go-Hawks blanketed Baumhover’s receivers and contained the run game for most of the night. But Western Dubuque executed when W-SR did not and came away with a 28-9 win to create some separation in the District 3 standings.

“Our kids swung back tonight,” W-SR head coach Mark Hubbard said. “Up at Waukon, we took it on the chin and we just took it and took it and took it. Here we are a couple weeks later, and I feel like our kids grew up and they made a fight out of it, and they battled and they competed.”

Baumhover entered Friday’s contest as one of the premier quarterbacks in the state. He added to what is turning into a highlight-reel senior campaign. Baumhover bombed the Go-Hawks for 291 yards and three touchdowns, often leaning on the run-pass-option to keep the Go-Hawks guessing.

Execution was a strength for the Bobcats (3-1). It was a struggle for the Go-Hawks (2-2), who had trouble generating consistent momentum and finishing drives.

“We have to execute better, and until we execute better, we’re going to come out on the short end of these things,” Hubbard added. “Our level of intensity was where it needed to be against a quality opponent.”

A steady, uninterrupted rhythm is something the Go-Hawks are still searching for. Glimpses of what they could be – a robust offense with four capable running backs, and a stingy, hard-nosed defense filled with talent.

That potential has yet to come to fruition.

The immediate results are in the process of being developed. The pain of waiting for a young roster to mature was felt.

W-SR appeared to have Baumhover figured out from the opening snap. The Go-Hawks were a step ahead of the Western Dubuque standout, keying on his top receivers Tommy DeSollar and Logan Brosius. Baumhover completed just three of his first 12 passes, resulting in a three-and-out on the Bobcats’ opening drive and another punt on their second possession.

The visitors couldn’t cash in.

Donovan Wessel returned the game’s first punt 27 yards to the Western Dubque 41-yard line. W-SR gained 19 yards on its first two plays from scrimmage, but its initial drive stalled inside the 25. Simon Ott’s 38-yard field goal was two feet short. W-SR ran three plays and gained zero yards on its second drive, before Jordan Bieneman pinned the Bobcats inside their own 25 with one of his booming punts.

As much as the Go-Hawks keyed on the Bobcats’ lethal receivers, eventually there would be opportunities to strike for the home team. Dakota Lau made sure of it. Lau, a 5-foot-8 speedster, snagged a 23-yard pass near midfield to ignite the drive. Big runs from Jacob Butcher and Sawyer Nauman marched the Bobcats inside the Go-Hawks’ 12. Then, Baumhover threw an 11-yard dart to DeSollar for a 7-0 lead with 16 seconds left in the first quarter.

DeSollar proved as dangerous as his stats indicated. He finished with a game-high 116 yards receiving on 10 catches – many going for 10 yards a pop, which created frustration for the Go-Hawks, who were on the field for nearly 28 minutes of regulation.

“A lot of those out-routes that they had (were big),” said Go-Hawks junior linebacker Kaden Bibler, who posted seven total tackles, including one for a 3-yard loss. “We got through that and then made adjustments from there.”

W-SR tightened up its secondary to take away the short passes, and the strategy seemed to work. For a while.

But the deficit doubled by halftime.

With 59 seconds remaining before intermission, Baumhover danced his way into the end zone from 2 yards out to give Western Dubuque a 14-0 edge.

Baumhover was 11 of 22 at halftime, and the Go-Hawks held him to just two completions of 20 or more yards.

Following an impressive lightshow performance by the Western Dubuque dance team at halftime, W-SR finally got on the scoreboard. McCrae Hagarty opened the third quarter with runs of 27 and 21 yards to push the Go-Hawks inside the Bobcats’ 20-yard line. Ott eventually connected on a 26-yard field goal to make it 14-3 with 7 minutes, 48 seconds left in the quarter.

The Bobcats then opened up the playbook and went deep – something the Go-Hawks knew was coming, but were caught off guard with defending the run-pass-option for most of the first half.

Bieneman’s 55-yard punt pinned the Bobcats inside their own 10. The Bobcats’ ensuing drive hurt the most. Baumhover threw a strike to Spencer Zinn, who was open in the flats, and Zinn raced out near midfield. Later on, Baumhover capped the 10-play drive with a 26-yard touchdown pass to Lau to extend the lead to 21-3 with 51 seconds left in the third quarter.

“They’re fantastic at the RPOs – the run-pass-options,” said Hubbard, “and he’ll hold it in there until the very last minute until something comes up, and he’s able to whip it out, and that’s something you’re able to do for a veteran like that. He’s a great quarterback.”

Hagarty needed one play to spark some buzz and build up hope for a late rally.

The latter new came, but the former was a big one.

W-SR called an inside trap, and Hagarty took the handoff from quarterback Brady Ramker. Seconds later, Hagarty emerged from the line of scrimmage, with nothing but grass between him and the end zone. The W-SR sophomore sprinted 98 yards for a touchdown – the longest run of his career.

“Cade Williams (said), ‘I don’t even know what happened,’” Hagarty said with a laugh, refering to his offensive lineman. “(Cade) said he bounced off his block and he took on a linebacker. He said he thought he messed up.

“I went through that hole wide open. It was so nice.”

On a night full of struggles, the Go-Hawks found the end zone. They ran a season-low 39 plays to the Bobcats’ whopping 79. Third downs hurt the Go-Hawks, who were just 1 of 9.

Baumhover tossed his third touchdown pass of the night, this time a 26-yard heave to Lau on third down to push it to 28-3. Baumhover was responsible for 317 of the Bobcats’ 476 yards of total offense.

Within those 118 total plays Friday night, a lesson emerged: The Go-Hawks, as young as they are, believe they are on the cusp of turning the corner and restoring their program. They hung with a championship-caliber team. Now, they aim to be one.

“Before we become a championship team, we have to be able to fight and compete and answer the bell, and they did that,” Hubbard said.

“Some of our younger players grew up tonight. They decided they were going to be varsity football players. Collectively, as a group, they took a big step forward.”

Variable clouds with snow showers or flurries. Temps nearly steady in the low to mid 30s. Winds NNE at 10 to 15 mph. Chance of snow 60%. About one inch of snow expected.

Partly cloudy skies in the morning will give way to cloudy skies during the afternoon. High 31F. Winds NNW at 10 to 15 mph.