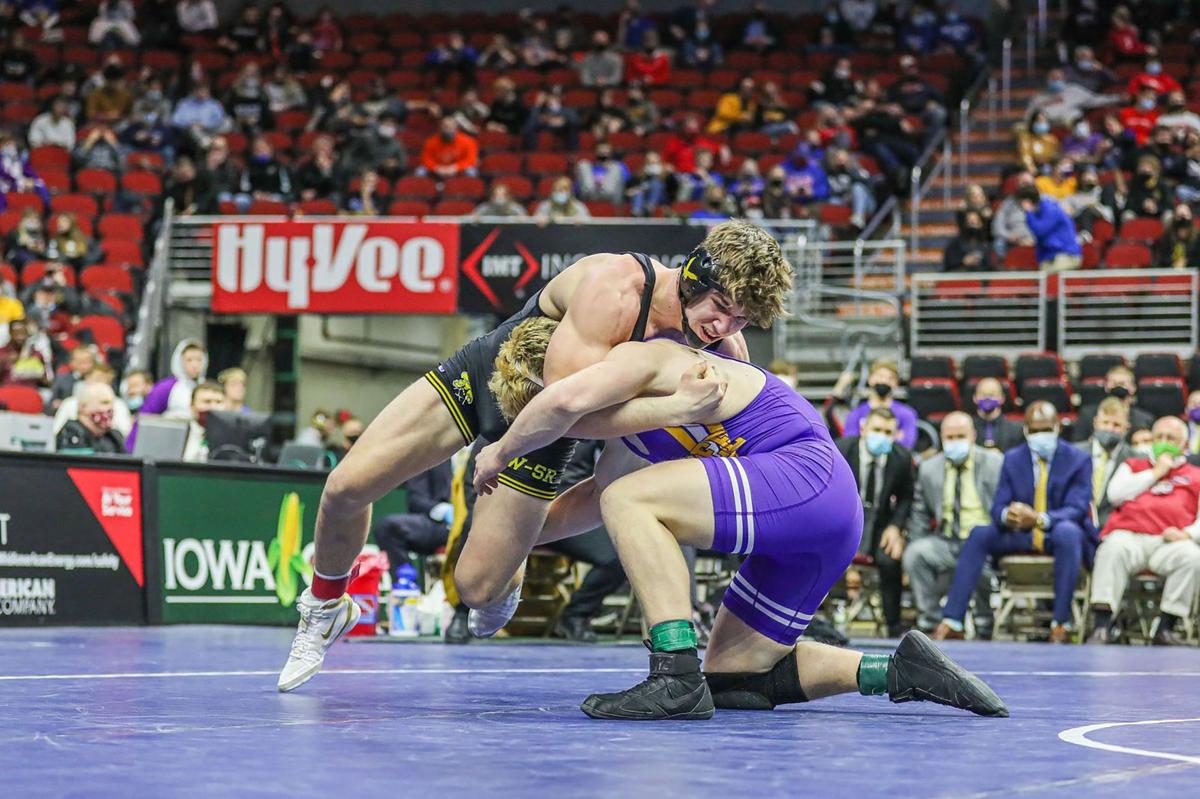 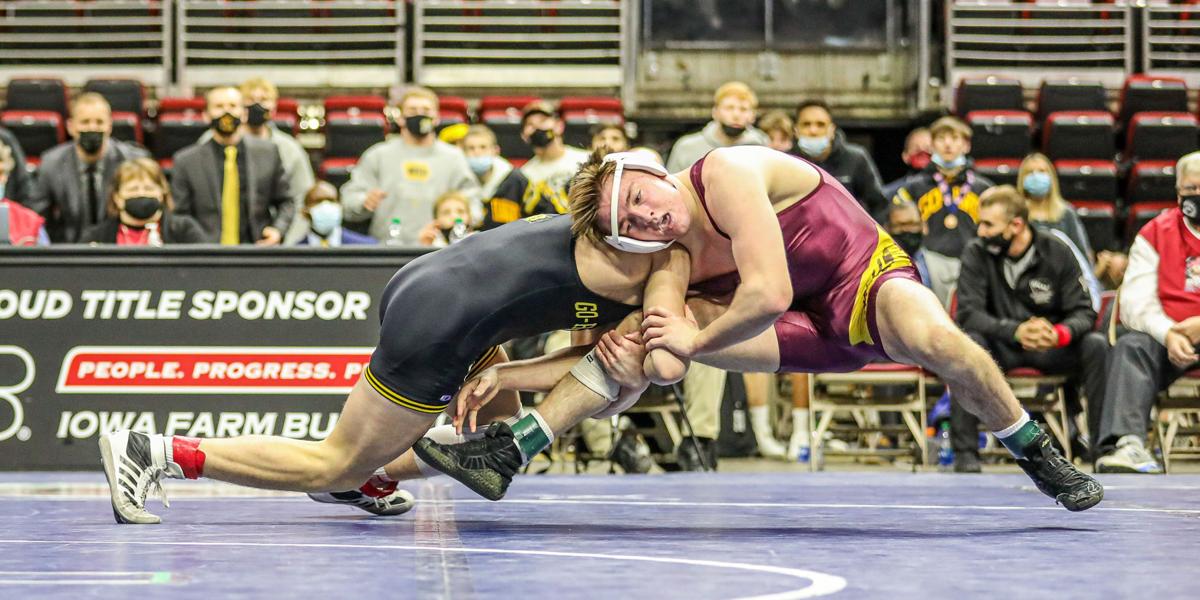 Call it a sweep.

Along with their 3A state duals title, the Go-Hawks made a clean sweep.

“These guys wanted a shot to win both, and they did it. They’re Go-Hawk legends for that.”

W-SR had five in the finals, while Waukee was close behind with four. Southeast Polk pushed two into Saturday’s finals. But it was W-SR with the final say, punctuated by action.

Junior Aiden Riggins, who overcame a number of knee injuries, won the 152-pound state title after not knowing what weight he was going to wrestle at before the season started. Sophomore McCrae Hagarty became W-SR’s second state champion of the night with a 3-2 decision over Waukee’s Griffin Gammell in the 182 final.

It was Hagarty’s late heroics that cinched the Class 3A team title for the Go-Hawks – a three-day journey full of dramatic twists that seemed to never end. Deadlocked 1-1 inside the final 10 seconds of the third period, Hagarty scored a takedown to move ahead 3-1 with 8 seconds remaining. He played defense from there, secured a 3-2 decision and the celebration was in full swing.

“Talk about a chance to knock it out of the park, and McCrae comes through with a head-to-head with a kid he had a close match with earlier in the year, too, that he won,” Whitcome said. “The mental growth that he’s shown in the last year is absolutely tremendous. And that’s why he’s a state champion this year, and that’s why last year he ended up fourth. But that goes to him and really buying into what his coaches were telling him and getting better mentally, and that’s just part of growing up as well.”

After misfiring on a few shots toward Gammell’s right leg, Hagarty switched it up in the final seconds and went for the left. The Go-Hawks had clinched each of their previous two team titles before the finals. It came down to the wire Saturday night.

“It was pretty stressful, I’d say,” Hagarty said. “I knew it was a lot more stressful for Waukee. I knew if I messed up, they could’ve gotten the lead. So, I knew I had to wrestle good, wrestle fundamentally and just wrestled my own match.

“I didn’t just win it for myself, I won it for the team. But he’s a good wrestler. I like wrestling him, so it was fun having a good, ‘ol match. Like people were saying, it was going to be a close (race), but at the same time, don’t worry about the team – worry about yourself, and the team points will come.”

Well before the first practice of the season took place on Nov. 16, 2020, Aiden Riggins wasn’t sure what weight he would compete at. Last season, as a sophomore, Riggins wrestled at 132 and placed second at the state tournament. As the regular season approached, Riggins met with Whitcome and the rest of the W-SR coaching staff. The thought, at the time, was for Riggins to be at 138 or 145. Another option emerged – one Riggins couldn’t pass up.

“I want to go 52,” Riggins recalled. “I want to take that challenge. I want to beat the best.”

Standing in Riggins’ way was Ankeny’s Caleb Rathjen, a two-time state champion and University of Iowa commit. The two met during a dual Jan. 9, and Riggins came away with a 9-8 decision.

The second matchup proved to be much like the first.

Rathjen grabbed a 1-0 lead early in the second period and held that advantage entering the third. Riggins broke free for an escape in the opening seconds of the final frame to tie it and scored a takedown with 40 seconds remaining. Rathjen managed a late escape, but Riggins held on for a 3-2 decision. Riggins flung his headgear off the mat, cocked his right arm behind his head and pointed his left toward the stands before shaking hands with Rathjen at the center of the mat.

“He’s one of the best in the country. We went out there and battled, and I just wanted it more and came out on top. Nowhere else to go but up from here, so just keep finding those toughest opponents and seeking them out and getting the best competition you can. That’s the only way you’re going to grow and become a better competitor.”

The win finally allowed Riggins to take a deep breath. It had been a long, grueling road to get back to Wells Fargo Arena. His career has been full of injury and heartbreak.

As a sophomore, he tore the meniscus in his right knee – the first injury he ever sustained. During the 132 final last season, Riggins tore his ACL. He spent the offseason recovering and, because of the ongoing COVID-19 pandemic, he wasn’t able to get much mat time in.

“Injuries are tough,” he said. “That (stunk). COVID over the year kept me from wrestling anyways and competing, but I missed all that mat time trying to get better. Being off the mat that long and missing the sport I love to do, it just built up inside me and reminded me how much I love the sport and miss it, and showed me how much I want to be out on the mat competing with the best, not cutting weight or trying to get the lowest competition I can to wrestle smaller kids. Why not go out there, be as healthy as you can, as strong as you can, wrestle with the best kids, there, too?”

Block, a sophomore and defending state champion, met Fort Dodge’s Drake Ayala in the 132 final. It was the rematch everyone gushed about when the tournament began. Block got the best of Ayala, an Iowa signee, with a 9-7 decision at the Rick Caldwell Invite on Jan. 23. Ayala drew even Saturday with an 11-3 major decision.

Jake Walker, also a sophomore and ranked No. 3 at 195 (The Predicament), met No. 1-ranked Ben Kueter of Iowa City, City High in the final. Jake Walker wasn’t able to get to his offense, and Kueter came away with a 5-0 decision.

A day after upending Southeast Polk’s Kalob Runyon in the semifinals, Luke Walker went up against Bettendorf’s Bradley Hill, the No. 1-ranked wrestler, in the 220 final. Luke Walker kept the match close throughout, trailing 2-1 after one period and 5-2 after two. But time ran out on the W-SR senior during a 5-3 loss.

“My heart goes out to all of our kids that didn’t get what they individually want,” Whitcome said. “I’ve got a lot of guys that are hurting right now, and they didn’t get to quite where they wanted to be. That’s why this thing’s so crazy. I’m so proud of how the guys had success, I’m so proud of our team success, at the same time, I really hurt for those guys that fell short of what they wanted.”

Roybal goes out on top

Bailey Roybal could have folded and given up. After losing in the Class 3A state semifinals Friday night at Wells Fargo Arena, Roybal’s dream of becoming a two-time state champion was shattered. Gone in the snap of a finger.

But the Waverly-Shell Rock senior didn’t give in, despite whatever negative thoughts tried to penetrate his mind. Instead, Roybal worked his way up the podium. First, he pinned Linn-Mar’s Kane Naaktgeboren in 3 minutes, 7 seconds. Roybal then donned the famous black singlet for the final time in his prep career and earned a 6-2 decision over Fort Dodge’s Lane Cowell to place third at 120 pounds.

“It stings a little bit from (Friday), but I just knew I couldn’t pout, I couldn’t mope, and I had to happy for my teammates,” Roybal said. “I got the chance to be here, and a kid in my class, Jace Smith, he isn’t here today, and he doesn’t get to enjoy and get this feeling. I wanted to come back and wrestle for him and make him proud. I couldn’t give up. I needed to bounce back for him.”

Smith died in 2016 from complications of a rare form of mitochondrial disease.

When the clock flashed all zeroes, and the official blew the final whistle to signal the end of the match, Roybal pointed toward his family in the arena’s upper-bowl and smiled.

“I just had to fight with as much as I can, give it everything and don’t hold anything back,” Roybal said. “Use whatever (Coach) Whitcome and all the coaches have given me over the past couple of years and everything I’ve bought into, put that to work. Whatever happens, happens, and the outcome is good. I’m happy to be here supporting the Go-Hawks and wrestling for them.”

Roybal, who will wrestle at Division I South Dakota State University this fall, compiled a record of 137-10 in three years at W-SR. Fighting back tears, Roybal thanked the community of Waverly for all of the support over the years.

“I love ‘em,” he said. “I love all my Waverly fans, all my coaches, all my friends and families, I love them.”