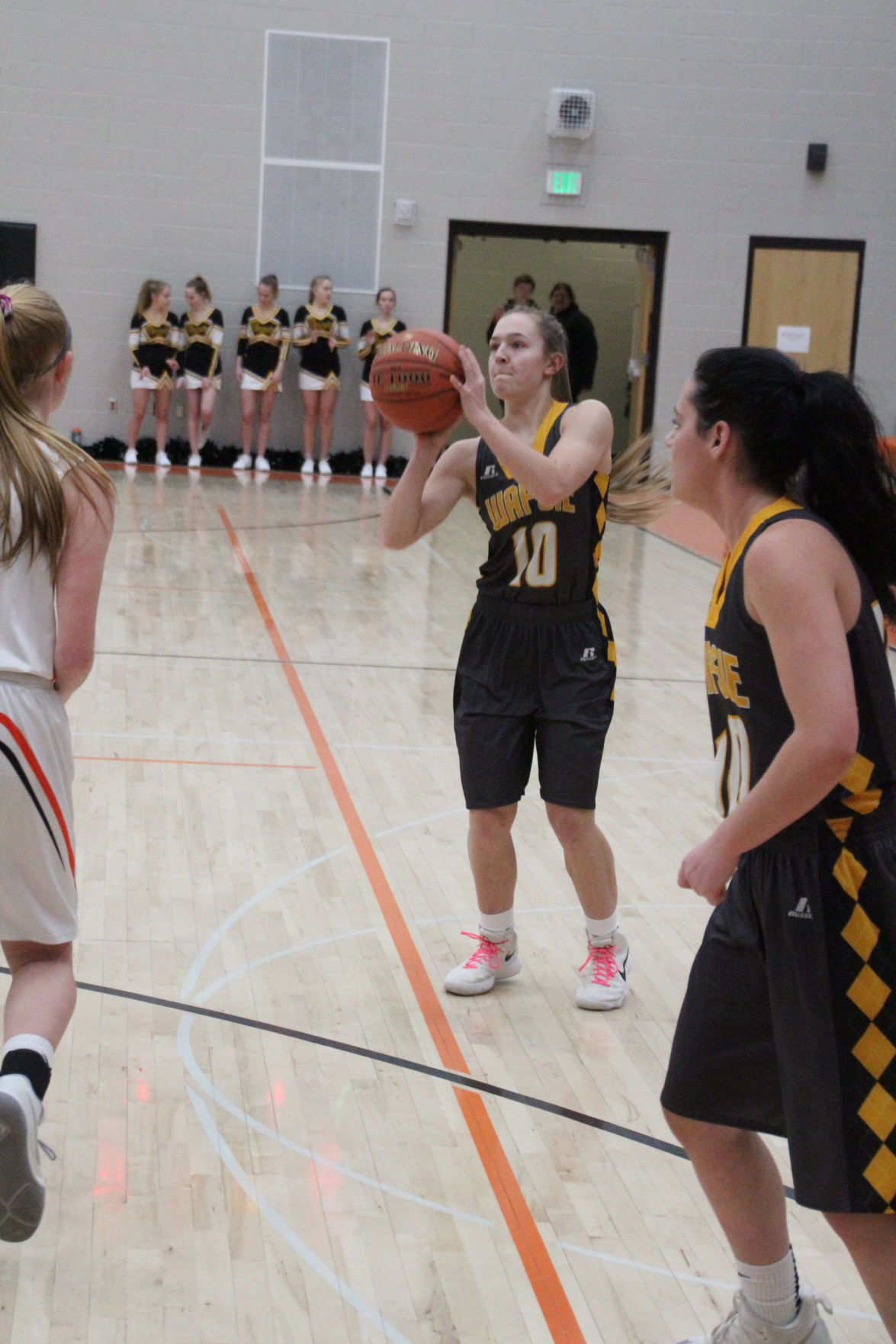 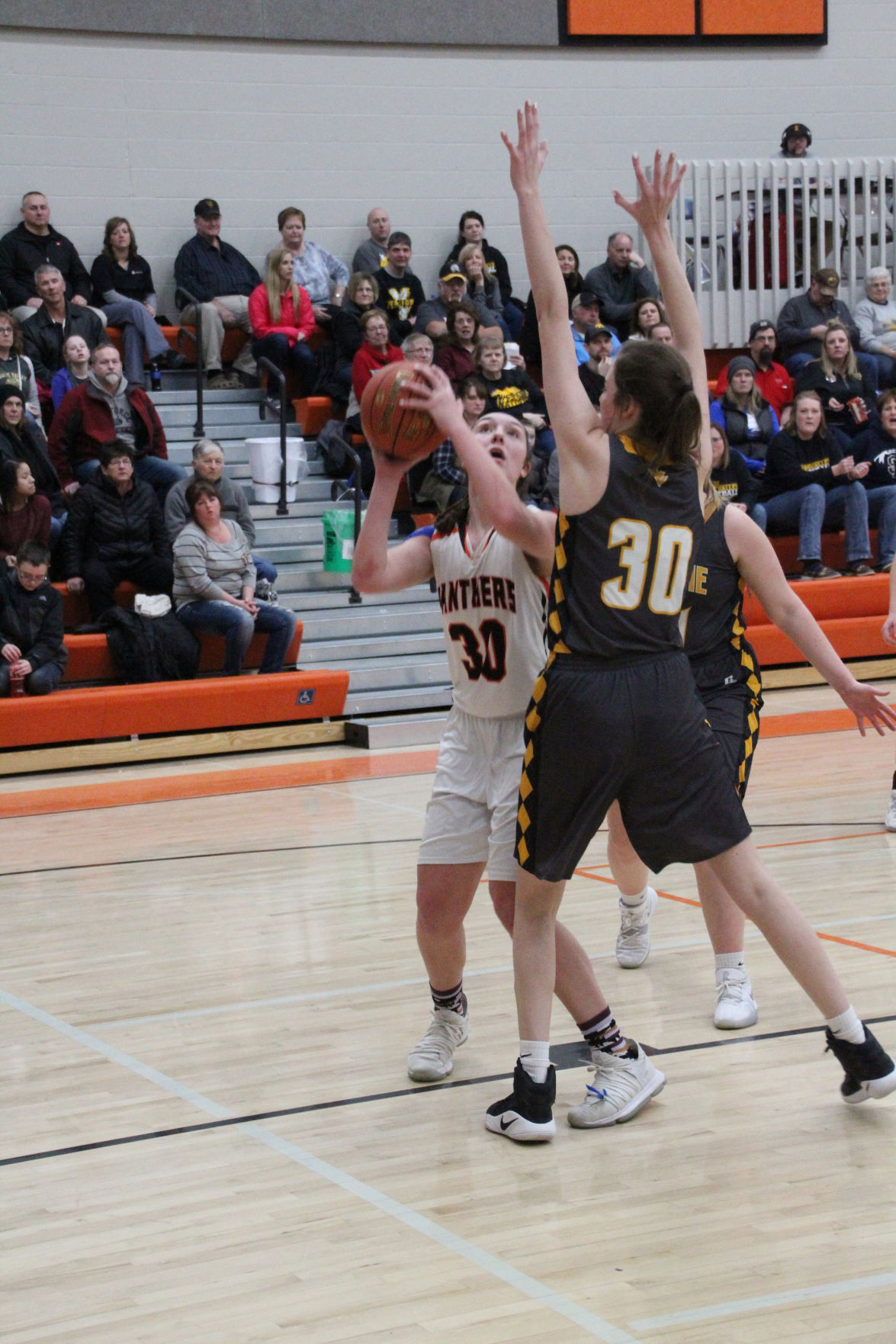 Tripoli’s Zoe Semelroth (30, white) tries to pump fake Wapsie Valley’s Mikenna Joerger (30, black) while trying to score two of her 11 points in the Warriors’ 50-32 victory over the Panthers on Friday, Feb. 1, 2019, at Tripoli High School.

Tripoli’s Zoe Semelroth (30, white) tries to pump fake Wapsie Valley’s Mikenna Joerger (30, black) while trying to score two of her 11 points in the Warriors’ 50-32 victory over the Panthers on Friday, Feb. 1, 2019, at Tripoli High School.

TRIPOLI — The time on the court for the Wapsie Valley and Tripoli girls’ basketball teams have been limited of late.

Between the multiple snowstorms over the past few weeks and the recent attack of the polar vortex, neither squad could get many practices in and much of their games were cancelled or postponed.

So, Friday night’s non-conference game at Tripoli High School could’ve exposed some rust from both sides. But in the end, the visitors showed enough moxie to get the win.

Kaci Beesecker nailed three 3-pointers en route to 23 points, while Erin Riordan converted on 10-for-16 free throws as part of her 18 tallies to pace the Warriors to a 50-32 victory over the Panthers.

Wapsie Valley coach Justin Davie said with the weather, his team’s schedule has been rather hectic.

“We’ve been playing pretty well without a lot of practice time,” Davie said. “For the first time, I think our rust showed a little bit.

“I thought in the first half, we didn’t shoot our free throws very well. We were missing shots in close that we normally make. It’s kind of a grind-it-out first half, but in the second half, I felt we got it inside. I thought we shot free throws better. I thought we finished better at the rim, and then late, we knocked in a few 3s that kind of pushed the lead a little bit.

“Honestly, the biggest difference between the first and second half, we boxed out a lot better on defense and limited them. They got some opportunities on offense in the first half off of offensive rebounds. We did a lot better job of holding the box outs in the second half. We’ve been playing pretty well lately. It was good to get the game in.”

Erica Ollendieck, Tripoli’s head coach, said the Panthers (12-6 overall, 10-2 Iowa Star North) did some things well, but struggled on others, which she pointed out her team had problems on the defensive glass.

“There are definitely some things we need to sharpen up before we face Janesville and Clarksville next week,” Ollendieck said. “Overall, in my opinion, I don’t think it was terrible. I think we did some good things.”

The first quarter was a back-and-forth affair, with each team having brief leads before the Warriors (9-9, 5-8 North Iowa Cedar League East) wound up with an 11-10 lead at the end of the period. Riordan had five of the team’s points while only making 3-for-6 from the line. Zoe Semelroth paced the Panthers with five, including converting on a traditional 3-point play.

The teams slogged through the second stanza, with many missed shots and free throws. By the time the teams went to the halftime locker rooms, Wapsie took a 20-14 lead. Beesecker scored five in the frame, including a triple.

In the third, the Warriors started their pull away. Riordan notched nine points in the period on 3-for-4 from the floor and from the charity stripe, while Beesecker added five, with a 3-for-4 effort from 15 feet and a bucket to help Wapsie take a 34-23 advantage into the final quarter.

Beesecker warmed up in the final period, making 4-for-6 from the floor, including a pair of treys, en route to 11 points.

In the final period, the Panther bench was handed a technical foul for overreacting to a Morgan Moeller foul at the 4 minute, 48-second mark. Beesecker split her one-and-one, while Riordan made the first technical shot but missed the second.

For the game, the Warriors made 16-for-45 from the floor, including 4-for-10 behind the arc. Beesecker accounted for 3-for-7 from long range. Meanwhile, Riordan completed her double-double with 16 rebounds, eight on each end of the court.

Mikenna Joerger was a factor in Tripoli’s 11-for-54 shooting. The Wapsie center turned away 11 shots by the Panthers.

“Those three have been our main scorers, and we’ve been getting some scoring from other places,” Davie said. “They’re pretty tough to stop.

Meanwhile, Semelroth led the Panthers with 11 on 5-for-11 shooting, while Olivia Miller added nine, making 2-for-6 from 3-point range, and Jetti Schmudlach added eight, but struggled with 2-for-8 from the floor.

Ollendieck observed that Tripoli could not make their outside shots.

“I think next week, we’re going to turn it around, and we’re going to do just fine. I think a lot of the things with my girls is you have one off night, and you pick it up the next night. I’m not concerned about that. I think we’ll be all right next week.”

Scattered thunderstorms in the morning, then mainly cloudy during the afternoon with thunderstorms likely. A few storms may be severe. High 83F. Winds S at 10 to 20 mph. Chance of rain 90%.