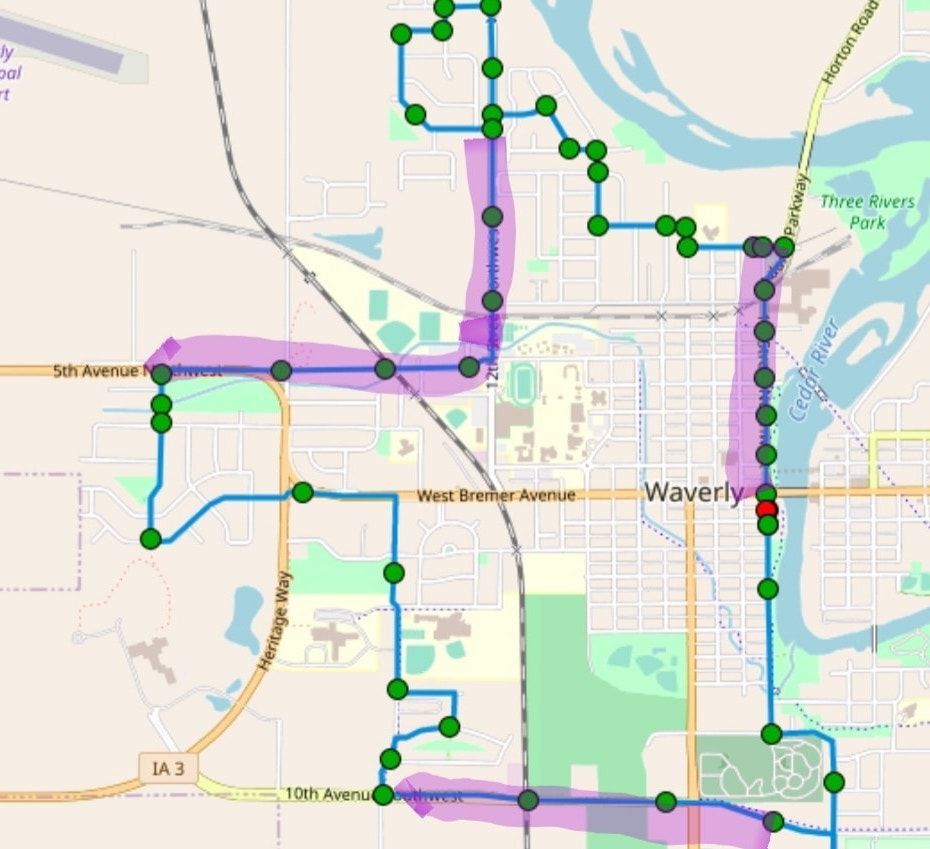 The Winter Lights Parade on Dec. 10 will follow this route, starting at the Waverly Fire Station, indicated by the red dot. Spectators can park to watch the procession in the areas highlighted in purple.

Tori Happel-Stone shows off one of the gift bags that will be given away on Dec. 9-10 at South Riverside Park.

The Winter Lights Parade on Dec. 10 will follow this route, starting at the Waverly Fire Station, indicated by the red dot. Spectators can park to watch the procession in the areas highlighted in purple.

Tori Happel-Stone shows off one of the gift bags that will be given away on Dec. 9-10 at South Riverside Park.

Santa’s a lot of things.

A giver of hope, a granter of wishes, a judge of good character and a tireless deliverer of things material and soulful.

True to form, he will make several appearances in Waverly for the public — starting on Dec. 5, from 3-6 p.m. (See story above for more details.)

But, at the invitation of a group of friends, he has also agreed to cruise around town on a fire truck and wave at everyone.

From there, it will follow west across Fourth Street onto 10th Avenue to 16th Street before veering into the Rolling Meadows subdivision onto Meadow View Lane, Sunny Slope Drive and Leitha Terrace. It then returns onto 16th Street, passing between Waverly-Shell Rock High School and Middle School to West Bremer Avenue, where it turns left and heads to 24th Street. There, the route goes north to Fifth Avenue Northwest, following that street to 12th Street.

At Park Avenue, the route turns to the left and follows toward Knoll Ridge Drive, Hillside Avenue, Circle Drive and Country Meadows Drive before returning to 12th Street, where it heads south to Ridgewood Boulevard. From there, it goes to Cedar River Drive to 10th Avenue Northwest, where it goes past Margaretta Carey Elementary to Ninth Avenue and then back south on First Street Northwest past Kohlmann Park to the fire station.

Organizers urge residents along those streets and their friends across town and in the area to wave at Santa from their front lawns or honk from their vehicles as he drives by.

Community members cannot congregate at the fire station, but if they’re interested in getting a goody bag, in a contactless manner, they can briefly drive through the Farmer’s Market location at South Riverside Park.

About 300 of those have already been packed and will be given out on a first-come-first-served basis. They contain hot chocolate, crayons, coloring pages, a cookie cutter and frosting.

During the cruise, Santa will be joined by Elsa, Cinderella and Buddy the Elf.

Kristin Happel, along with Stephanie Yoder and Carmen Goedken came up with the idea after brainstorming how to create cheer in the midst of multiple cancellations of holiday events.

In April, Happel organized an Easter Bunny drive through several Waverly neighborhoods, which brought a lot of smiles and waves as the fire truck, driven by Happel’s father and Waverly’s Fire Chief Dennis Happel, made its way through town.

The approaching Christmas holidays posed a similar dilemma for organizers — how to safely celebrate a holiday in the midst of a pandemic.

“This was definitely out of necessity,” Kristin Happel said of the emergence of the event.

She said that with Christmas on Main canceled, she and her fellow organizers volunteered to put something creative in place that would feed the soul and not challenge the body.

A Santa cruise atop one of the fire trucks seemed to fit the bill.

Elsa, who will be played by Happel’s 14-year-old daughter, Tori, will be doing some snow magic with special gloves, and exactly what Cinderella and Buddy the Elf will be doing other than waving can be summed up in one phrase — spreading good cheer.

The cruise format is more conducive to the spirit of the event, Kristin Happel added, since unlike a parade, it does not require the closing of intersections.

“It’s a family event, it is going to be really relaxed,” Happel said. “It will be a fun and memorable way to spread a little joy.”

Cloudy with snow showers developing during the afternoon. High near 25F. Winds W at 10 to 20 mph. Chance of snow 40%.