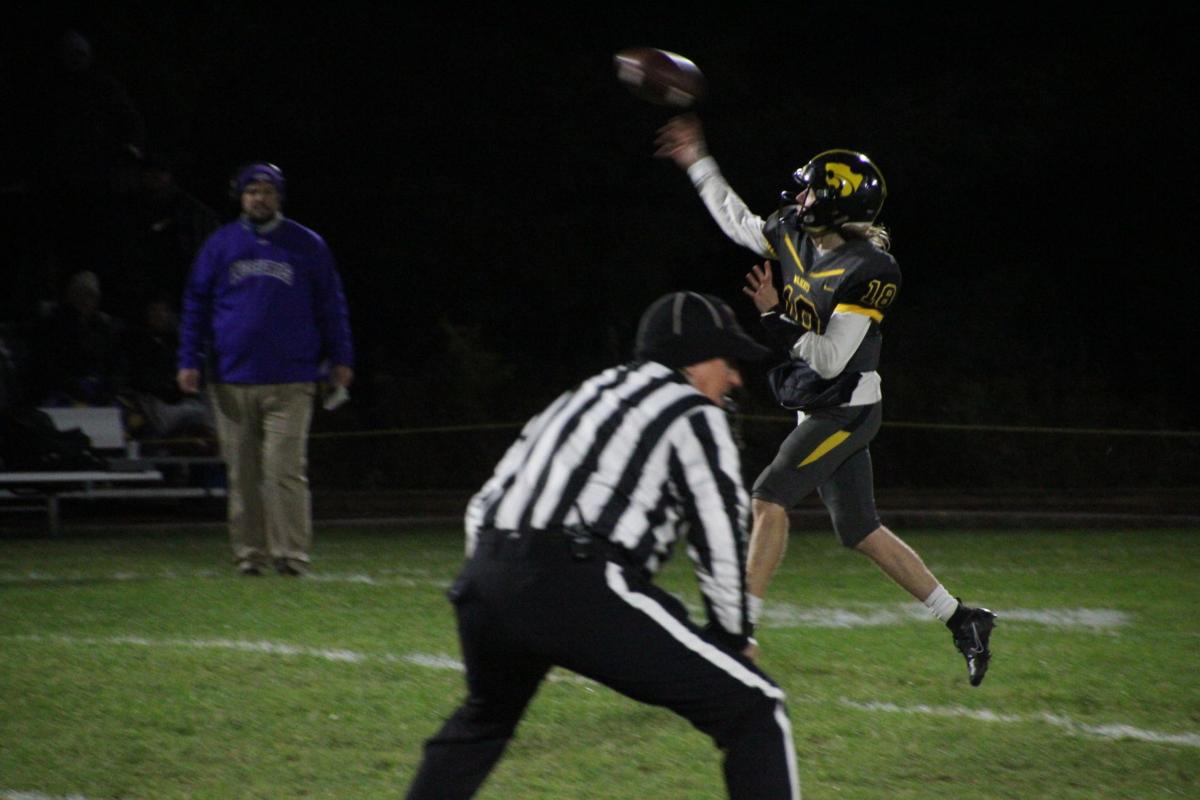 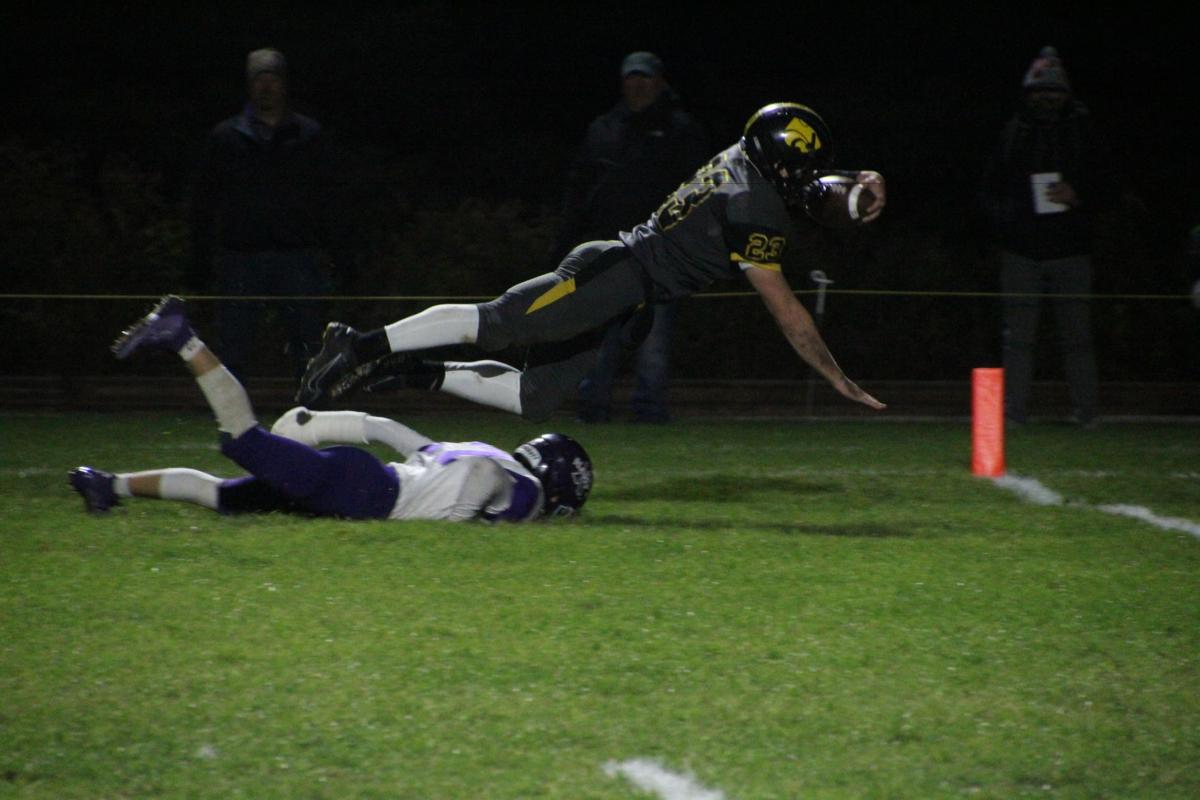 Janesville’s Carson Pariseau (23) dives for the end zone after Kee High’s Tyson Cole (27) missed a tackle during the second quarter of the Wildcats’ 62-26 victory over the Kee Hawks in an 8-man, Pod 5 playoff game Friday, Oct. 23, 2020 at Jack Bolt Field.

Janesville’s Carson Pariseau (23) dives for the end zone after Kee High’s Tyson Cole (27) missed a tackle during the second quarter of the Wildcats’ 62-26 victory over the Kee Hawks in an 8-man, Pod 5 playoff game Friday, Oct. 23, 2020 at Jack Bolt Field.

JANESVILLE – With the Janesville football team, its opponents can just pick their own poison.

They can concentrate on stopping running back Carson Pariseau, but then quarterback Leo Dodd can carve up the defense with his passing and running. However, if they focus on the Wildcats’ signal caller, Pariseau can break a big run for a score.

Against Lansing Kee High on Friday night, both Janesville standouts had a big night in an 8-man, second-round playoff game at Jack Bolt Field. Pariseau scored five touchdowns on the ground, getting 244 yards on 20 carries, while Dodd threw for four scores, three of them to Jared Hoodjer, in a 62-26 victory over the Kee Hawks.

The win put the Wildcats into the third round, which is the traditional 16-team playoff. They were placed in Pod C and will host New London. The winner will face the victor of top-ranked Don Bosco and Tripoli.

Janesville head coach Dale Eastman praised Hoodjer for having a solid game on both sides of the football. The junior had 16.5 total tackles, including seven solo stops, to go with his offensive output.

“He had a (heck) of a football game,” Eastman said of Hoodjer. “That’s a heck of a night for anybody.”

Eastman then turned his attention to his feature running back and quarterback.

“If we can do the things that we’re doing, that’s a fun football game.”

Pariseau gave all the credit to his line for opening the holes.

“If the front doesn’t block for me, I can’t get anything,” Pariseau said. “As long as I get the blocking, and Leo keeps throwing the ball as he does, when they try to stop the pass, we run. When they stop the run, we pass.

“You try to pick what you want to stop and try to stop it. We just beat you the other way.”

It didn’t take long for the Wildcats (8-1) to get on the scoreboard. On the second play of the game from scrimmage, Pariesau scored from 43 yards out for a touchdown just 21 seconds into the game. After a failed 2-point running attempt, the Wildcats were ahead 6-0.

Kee (5-4) was able to pound the football in its first possession, going 13 plays and amassing 38 yards with heavy doses of fullback Buddy Hill and tailback Landon Reams. However, quarterback Damon Weber was stopped for no gain on fourth-and-9 from the Wildcats’ 28 to turn the ball over on downs.

Again, Janesville struck quickly to score. Dodd connected with Jaden Appleby on the first play for 23 yards, and two plays later, Dodd found Hoodjer for a 30-yard completion for a touchdown with 4 minutes, 8 seconds left in the opening quarter for a 12-0 lead.

Kee was able to answer with a five-play drive that went 50 yards. Weber found the end zone on a 10-yard run with 1:49 left before the first change of ends to halve the lead to 12-6.

Janesville was able to answer on the next possession that straddled the quarters. The drive started at midfield, and Pariesau had a 21-yard gain on third down to the Kee 19-yard line. After a 6-yard loss, Pariseau broke off a 24-yard run on the first play of the second period. He finished off the drive on the very next play with 11:18 left before intermission. He then added the 2-point conversion by trucking a defender at the goal line to make the score 20-6.

The Wildcats’ defense forced the Hawks to turn the ball over on downs on the Hawks’ 38, but the first play forced the Wildcats backward on a snap that went over Dodd’s head back to his 25. After a 4-yard Pariseau run, Dodd scrambled on a third-and-22 and threw to Wiley Sherburne for what wound up being a 46-yard gain to the Hawks’ 5. Three plays later, Pariseau scored from 2 yards out to make the score 26-6 with 5:30 left in the half.

Kee then got a little bit of luck on the very next scrimmage play. Hill fumbled the ball after a 2-yard gain. However, Reams was able to pick up the loose change and rumble the rest of the way for a 55-yard touchdown run. After a pass from Weber to Hill for 2, the margin was 26-14 with 5:10 remaining before the break.

But Janesville found another quick hit. On the second play of the ensuing possession, Pariseau ran 53 yards for a touchdown with 4:48 left in the second quarter. Dodd found Sherburne for the conversion to make it 34-14.

The next four possessions ended in turnovers. On Kee’s third play of its next series, Weber’s pass intended for Hill was intercepted by Joey Carlson. However, on the next play, Dodd tried to pitch the ball to Pariseau on an option, but it went awry. Hill pounced on the pigskin at his own 39.

The Hawks mounted a possession that reached the Wildcats’ 3, but a post-play personal-foul penalty pushed the ball back to the 18. After Weber lost 6 yards on a loss of footing on the next play, he forced a pass to Hill that was picked off by Hoodjer at the 5.

During the ensuing possession, Dodd connected with Pariseau for 13 on first down, but then another pass intended for Pariseau was intercepted by Jayden Drape and taken back 20 yards for a score with 1:02 before the break to make the score 34-20.

The Wildcats only needed two plays to rectify that wrong. Pariseau ran in both of those, first a 9-yard run and then a 50-yarder for the touchdown with 34 seconds left for a 40-20 lead. Reams fumbled the kickoff on his 31-yard line, and Janesville recovered. Two plays later, Dodd found Hoodjer from 8 yards for another touchdown with 13 seconds left for a 46-20 halftime score.

At the start of the third quarter, it seemed Kee was going to grab the momentum when Reams returned the kickoff 67 yards to the Janesville 12-yard line. However, over the next four plays, Kee netted a 1-yard loss and lost the ball on downs without points.

The Wildcats then went 10 plays and 67 yards to add another eight points, capped with a 14-yard touchdown pass from Dodd to Sherburne and a Pariseau conversion run with 8:12 left in the penultimate period for a 54-20 lead.

Kee again lost possession on downs after a nine-play possession that went 36 yards to the Janesville 27. The Wildcats then needed six plays to go 53 yards with a Dodd-to-Hoodjer 28-yard pass play with 1:39 to go in the third, followed by a pass to Sherburne for two to invoke the running clock, 62-20.

The Hawks answered with a time-consuming, 11-play drive added by a personal-foul flag and capped by a 2-yard run by Weber. However, the two-point conversion run failed, keeping the margin 62-26 with 5:19 to play.

In addition to his big game on the ground, Pariseau had a 13-yard catch and 10 total tackles on defense, including five solo stops and a fumble recovery. Dodd was 9 of 14 passing for 184 yards with a passer rating of 174.7, and also ran 10 times for 77 yards.

All three of Hoodjer’s catches went for touchdowns. Sherburne had a total of four grabs for 93 yards, including his scoring reception. Carlson had an 11-yard catch.

Eastman said Pariseau running the ball was the right move.

“It was exciting to watch him play. He’s going to give all the credit to those guys up front. That’s what’s nice about him, a humble kid. He does a great job for us.”

Eastman also said Dodd had a great game behind center.

“He throws the ball well, he sees the open receiver,” Eastman said. “He’s elusive out there. When he gets pressure, he can roll outside and get away from people and makes good things happen for us.

“It’s really nice. It gives us a good one-two combination, a one-two punch, where you have two guys, if they stop the run, we can still throw the ball. If you stop the pass, we’re going to run the ball. Pick your poison. Hopefully, we can execute as the week goes on.”

This story was updated online with statistics and a box score at 11:45 a.m. Saturday. It was further updated when the playoff pairings were announced after noon Saturday.