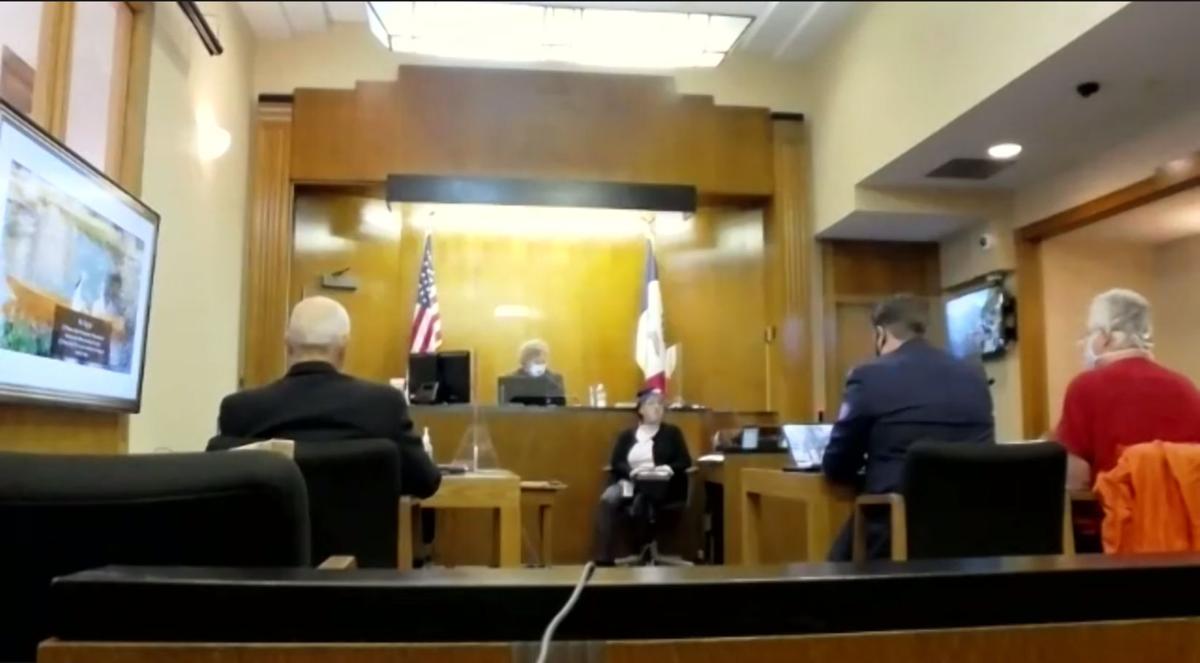 As no spectators were allowed in the main courtroom of the Bremer County Courthouse due to increases in COVID-19 infections, District Court Judge DeDra Schroeder, center, held a bench trial in the murder case against Daniel Niebuhr, right, and had it broadcast over Zoom starting Tuesday. Also pictured are Bremer County Attorney Kasey Wadding, left, and defense attorney Chad Frese, second from right. 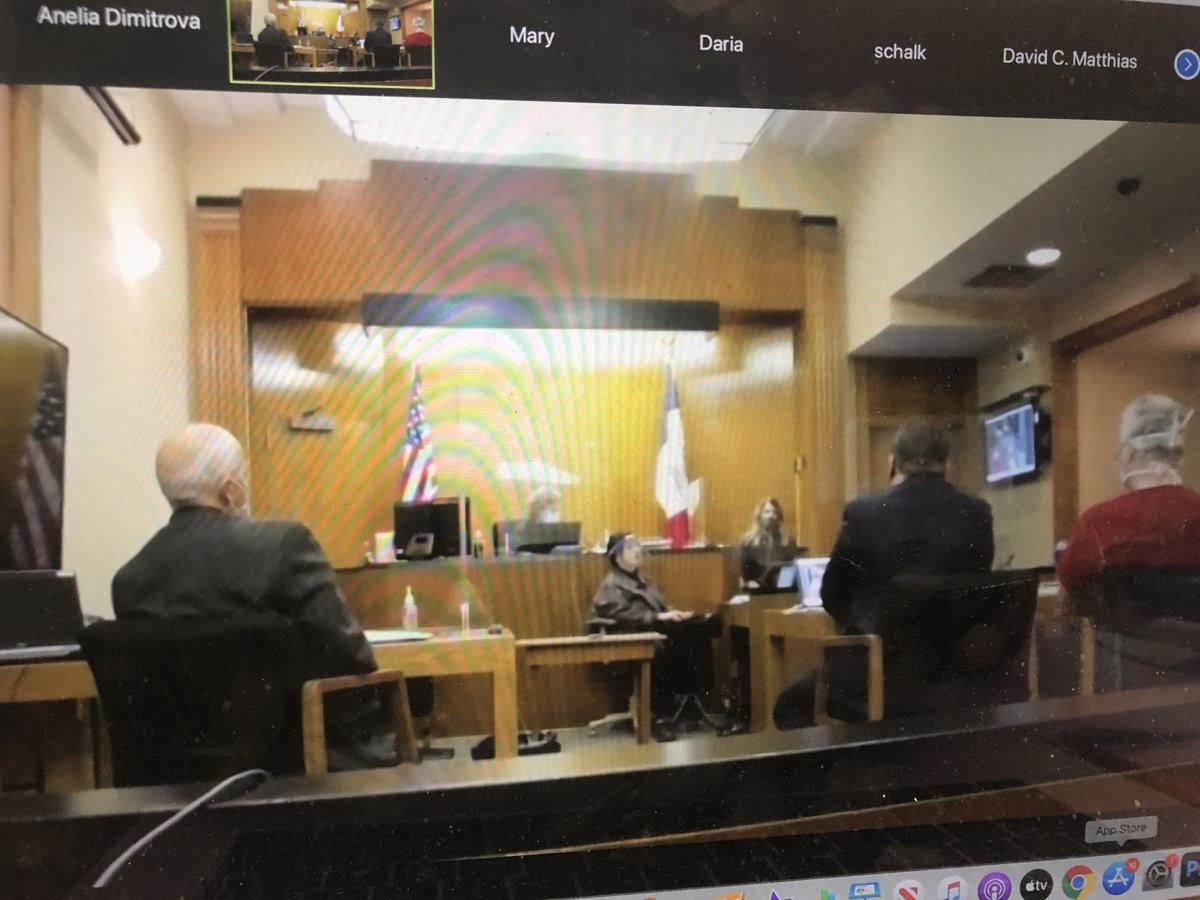 Anne Niebuhr, shown on the stand in the background of this photo of the Zoom broadcast, gives her recollections of what happened on March 22, 2019, during the first-degree murder trial of her husband, Daniel Niebuhr. 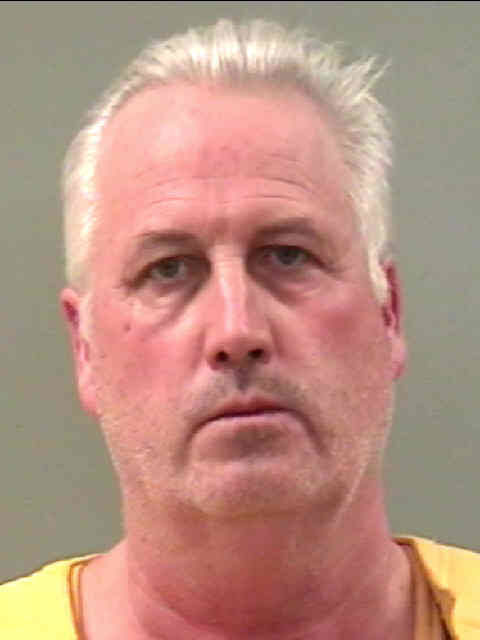 As no spectators were allowed in the main courtroom of the Bremer County Courthouse due to increases in COVID-19 infections, District Court Judge DeDra Schroeder, center, held a bench trial in the murder case against Daniel Niebuhr, right, and had it broadcast over Zoom starting Tuesday. Also pictured are Bremer County Attorney Kasey Wadding, left, and defense attorney Chad Frese, second from right.

Anne Niebuhr, shown on the stand in the background of this photo of the Zoom broadcast, gives her recollections of what happened on March 22, 2019, during the first-degree murder trial of her husband, Daniel Niebuhr.

Brock Niebuhr had just sat on the sofa in his father’s rural-Fairbank house on the afternoon of March 22, 2019, to watch the NCAA men’s basketball tournament.

It was the end of a trying day.

He had spent much of the early afternoon searching for his father, Daniel Niebuhr, after his stepmother, Anne, had called to tell him something was wrong with his father. Daniel Niebuhr was supposed to have delivered some furniture in Cedar Falls but never did.

Brock caught up with his father eventually at the nearby St. John’s Evangelical Lutheran Church. Daniel Niebuhr had ended up there to talk to the Rev. Jacob Swensen, the parish’s pastor. Daniel Niebuhr appeared not to recognize his son, Brock’s wife, Lauren, testified in court on Tuesday.

Prior to that, Daniel Niebuhr had been wandering around the Wapsie Ridge Golf Course near Fairbank, the facility he had managed with his late father, Loren.

But later on, the crisis seemed to have subsided, after Brock rebuked his father “sternly,” telling him he was hurting those around him and his wife.

Eventually, father and son shared a hug, and smoked cigars outside.

Daniel Niebuhr’s wife, Anne, and a friend, who took part in the search, offered to pick up a prescription for Daniel Niebuhr’s meds, which he had stopped taking, and also grab some clothes from Brock’s home in Dike, so he could stay the night and provide 24/7 supervision for his father.

Before the women returned, the trajectory of that family’s life had been altered forever.

The son was dead.

A bullet from the father’s SIG Sauer 9mm pistol had cut his life short. Brock Niebuhr was 36.

When Bremer County Sheriff’s Deputy Glenn Beenblossom responded to the 911 call from the Niebuhr residence, originally described by the Buchanan County dispatcher as a stabbing, he saw Daniel Niebuhr sitting on the steps of the front porch. He asked him what had happened:

The aftermath of the family tragedy continued to unfold on Tuesday, but this time in the courtroom at the Bremer County Courthouse in Waverly.

Whether Daniel Niebuhr, 60, acted with premeditation as he pulled the trigger, as the prosecution argues, or whether he did so in a moment of insanity, similar to the psychotic episodes he had previously experienced, as the defense contends, will ultimately be decided by District Court Judge DeDra Schroeder, since this is not a jury trial.

After multiple delays, the trial continues today under the coronavirus pandemic protocols for the judicial branch. The judge, the prosecutor, the defense, as well as the defendant and the witnesses all wore face coverings and the court reporter wore a face shield. No spectators are allowed and the witnesses have to wait for their turn in their vehicles to comply with social distancing guidelines. The trial is carried live on Zoom and the clerk of court has a link for the public.

Daniel Niebuhr’s erratic behavior had worried his family for some time, his wife of 13 years, Anne, testified Wednesday morning.

She testified that at some point, he had been found in the driveway, praying on his knees.

“Kevin (Daniel’s brother) had to complete the miracle he had experienced,” she said, summing up Daniel Niebuhr’s statements to her.

She said he had been off his medication and under a lot of stress from losing his father to brain cancer in December of 2018, and that same year, losing the golf course business after a 25-year run.

“He exhibited some very bizarre behavior,” she said.

She was the seventh witness called to the stand on Tuesday and Wednesday.

Other witnesses, including law enforcement, continued to reconstruct the happenings surrounding the events leading up to and following Brock’s death.

Only two were present at the moment it happened — the victim and the accused.

Daniel Niebuhr sat between his attorneys, Chad Frese and Jennifer Frese, and appeared engaged in the witness testimonies and in the evidence that was presented by Bremer County Attorney Kasey Wadding

Questioned by Wadding, and then on cross examination by Chad Frese on Wednesday, Anne described the father-son relationship as one in which the two men had mutual respect and love for one another, and spent time together when they could, but both worked a lot.

She said Daniel Niebuhr suffered from severe insomnia and was deeply impacted by what had befallen on him.

The golf course business had been declining and Daniel Niebuhr, she said, was having “to work harder to keep it afloat and cut expenses.”

She said when Daniel Niebuhr finally decided to close the business, a measure made inevitable by the downward spiral, he gathered the members to tell them in person about this predicament.

“It wasn’t that he completely failed,” she said.

She added that a golf course that stays in business for 25 years is not a failure, but her husband considered it one.

She also said Daniel Niebuhr did not want to take his pills because he blamed his mother’s death in 1990 on medication she had been taking.

“Did you have any inkling that something like this can happen?” Chad Frese, of Kaplan & Frese LLP, the defense lawyer, asked her regarding the fatal outcome.

“Absolutely not,” she said.

In his opening statement Tuesday, Frese contended that the killing was a result of a “psychotic episode” Daniel Niebuhr had experienced that day.

After losing his father, on Dec. 16, 2018, after an 18-month battle with brain cancer, Daniel Niebuhr became the executor of his father’s estate, juggling these duties with his responsibilities at the golf course and his own job at John Deere.

By mid-February, the pressure had become too much to bear, and Daniel Niebuhr was committed to UnityPoint Health-Allen Memorial Hospital for about 10 days.

While his father was in the hospital, Brock visited him daily, according to testimony by Brock Niebuhr’s widow, Lauren.

The defense told the judge that Daniel Niebuhr was discharged from the hospital on Feb. 22, but a month later, the psychosis returned.

“He was not acting maliciously,” Frese said about his client’s frame of mind at the time of the shooting.

In court, Special Agent in Charge Chris Callaway from the Iowa Division of Criminal Investigation testified to the aftermath of the shooting.

He identified from photos shown by Wadding the 9mm pistol as well as another Smith & Wesson handgun along with the two bullets recovered at the scene, one near the garage and the other that killed the victim.

Callaway told the court that there was no evidence of a struggle between father and son, and he also couldn’t establish which shot came first, inside or outside of the house.

In cross-examination, Frese asked if Brock could’ve heard the shot from outside if it came before the lethal bullet.

“The house was insulated, and it was quiet inside,” Callaway replied. “You cannot hear noises from the outside. It’s a well-insulated, well-built home. I don’t know if somebody would be able to discern it to be a gunshot or a hand clap.”

Lauren Niebuhr, the victim’s widow, described how her husband contacted her during her lunch break on that fateful Friday.

The last text message Lauren received from Brock was at 3:22 p.m. She said she spent the next 4 hours trying to call and text him to no avail.

As she recounted the tragic circumstances of that day, Lauren was overwhelmed. The court reporter gave her a box of tissues and Judge Schroeder arranged for a bottle of water.

In the cross-examination, Frese, the defense attorney, asked Lauren if there was any animosity between father and son. The widow said there wasn’t.

“I was shocked that (Brock) was murdered, I’ll say that,” Lauren said. “You have to be mentally ill to kill your son.”

On redirect, Wadding, the county attorney, asked Lauren if Brock was a stabilizing influence for the defendant.

“He was involved with his father,” Lauren said. “It was a normal relationship. He was the only one who was holding him accountable.”

Following the widow on the witness stand was Marilyn Helmuth, a volunteer custodian at St. John’s where Daniel Niebuhr had sought some spiritual guidance. She was vacuuming near the front entrance when he arrived.

She asked Daniel Niebuhr if he was looking for something.

“He said in a low voice, ‘God,’” Helmuth recalled.

Later in testimony, Shirley Riggle, who lived with Daniel Niebuhr’s widowed father for 26 years, said Daniel Niebuhr was always there for her and his father.

“Anything I needed, he was there,” she said. “His heart was as big as he is.”

She added that Daniel Niebuhr and Brock bonded well, especially when they watched Iowa State football games together.

“They were bonding as adult son and father,” Riggle said.

Sunshine along with some cloudy intervals. High 43F. Winds W at 5 to 10 mph.