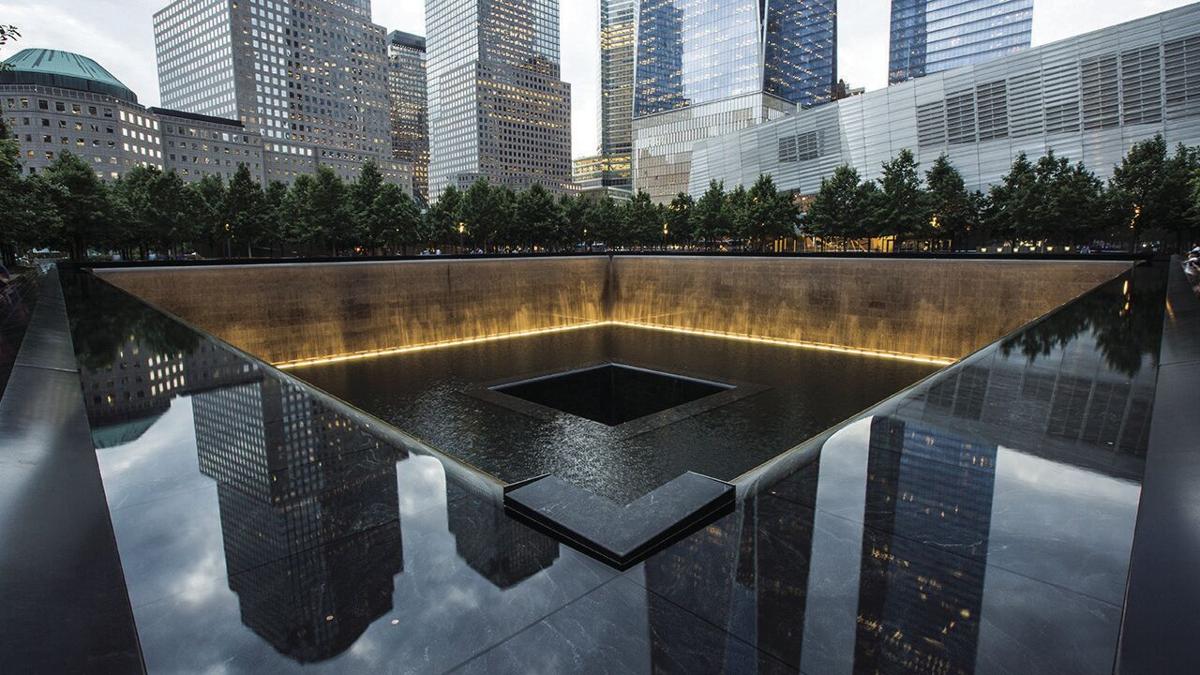 The National 9/11 Memorial and Museum in New York City has two waterfall polls set in the footprint of the former Twin Towers. The water flows into the 30-foot-deep structures for about 20 feet before falling into a central void. 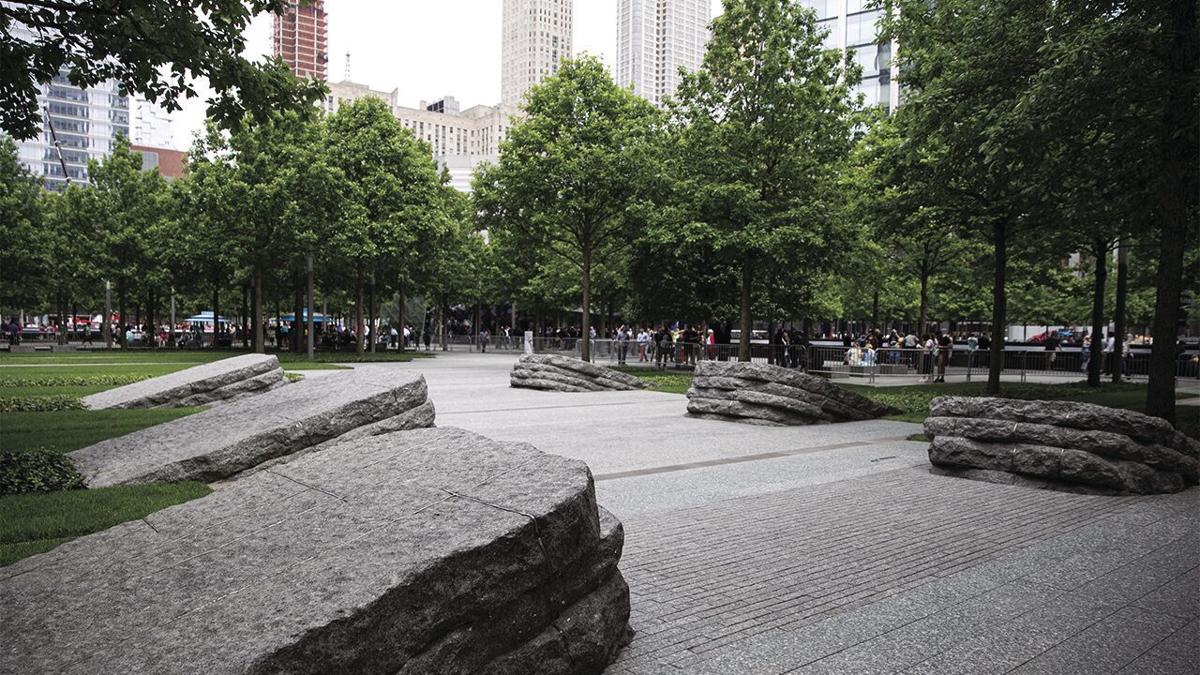 A memorial glade was opened on May 30, 2017, to honor those who were either sickened or have died from the toxins in the aftermath of the terrorist attacks at the World Trade Center, the Pentagon and Shanksville, Pennsylvania.

Commuters were headed to their jobs, parents were taking their children to school or daycare, and most everyone else were going about their routines on this late-summer day.

But when the first of two passenger jets slammed into the south tower of the World Trade Center, followed by the second into the north, the tide of American history turned.

Over the next several hours, New Yorkers and the rest of the world witnessed as the Twin Towers eventually tumbled to the ground, killing nearly 3,000, including hundreds of first responders.

In the years after the rubble was cleared, the National 9/11 Memorial and Museum was constructed at the site of where once the twin towers stood.

The complex opened on the 10th anniversary of 9/11.

It was dedicated on May 15, 2014, by President Barack Obama. In his remarks, President Obama called the memorial “ a sacred place of healing and hope.”

“Here, at this memorial, this museum, we come together,” Obama said. “We stand in the footprints of two mighty towers, graced by the rush of eternal waters. We look into the faces of nearly 3,000 innocent souls -- men and women and children of every race, every creed, and every corner of the world. We can touch their names and hear their voices and glimpse the small items that speak to the beauty of their lives. A wedding ring. A dusty helmet. A shining badge.

“Here we tell their story, so that generations yet unborn will never forget. Of coworkers who led others to safety. Passengers who stormed a cockpit. Our men and women in uniform who rushed into an inferno. Our first responders who charged up those stairs. A generation of servicemembers -- our 9/11 Generation -- who have served with honor in more than a decade of war. A nation that stands tall and united and unafraid -- because no act of terror can match the strength or the character of our country. Like the great wall and bedrock that embrace us today, nothing can ever break us; nothing can change who we are as Americans….”

“Those we lost live on in us,” Obama said. “In the families who love them still. In the friends who remember them always. And in a nation that will honor them, now and forever.”

Each year on the anniversary of 9/11, the families of victims gather on the 9/11 Memorial Plaza for a commemorative ceremony. The names of the 2,983 men, women, and children who perished in the September 11, 2001 attacks, and those who died in the February 26, 1993 bombing of the World Trade Center, are read out loud.

Six moments of silence punctuate the ritual -- when each of the World Trade Center towers was struck; when each tower fell; when the plane crashed at the Pentagon, and the crash of United Airlines Flight 93 in Pennsylvania.

A year and a half after the attacks, in April 2003, the Lower Manhattan Development Corporation created a contest to choose a design for a permanent memorial as part of the group’s effort to revitalize the World Trade Center area after 9/11.

Out of more than 5,000 submissions from 63 countries, in January of 2004, a 13-person jury chose a design by architect Michael Arad and landscape architect Peter Walker called “Reflecting Absence.”

Their work features twin waterfall pools surrounded by bronze parapets inscribed with the victims of the attacks as well as those who died in the earlier bombing of the complex in 1993.

The pools are set in a plaza surrounded by more than 400 swamp white oak trees.

Each of the pools measures an acre in size and fits in the footprints of the former Twin Towers. The pools are set 30 feet deep, and then the water flows another 20 feet before disappearing in smaller voids in the center of each.

The pools represent “absence made visible,”

according to the architect, as quoted on the museum’s website.

While the design allows the water to flow into the voids, they can never be filled.

Meanwhile, the parapets around the north pool have the names inscribed of those who died in the North Tower’s collapse, on American Airlines Flight 11 and those who were killed in the 1993 bombing.

The south pool identifies those who were killed in the South Tower, on United Airlines Flight 175 and the first responders who died in response, along with the victims from the Pentagon, American Flight 77 and United Flight 93.

Alongside swamp oaks, which are native to the New York, Pennsylvania and Virginia areas, there stands a single Callery pear tree.

Recovery workers discovered the tree among the rubble in October 2011 severely damaged.

New York City Parks and Recreation Department workers removed the tree from Ground Zero and nursed it back to health before returning it to the site in 2010. As it survived the attack, locals dubbed it the Survivor Tree.

In the southwest quadrant of the facility, a glade was established that opened May 30, 2017, to honor those who were sickened or have died from the toxins that resulted from the attacks. Those include first responders and recovery workers not only in New York but also at the Pentagon and in Shanksville, Pennsylvania, along with relief workers and volunteers, World Trade Center survivors, and lower Manhattan residents, students and workers.

The 9/11 Memorial Glade also recognizes the determination and perseverance of those who were a part of the recovery process, according to the memorial’s website. It includes a pathway with six large stone monoliths, each inlaid with a remnant of the Twin Towers’ steel, symbolizing strength through adversity.

For more information about the National 9/11 Memorial, go to 911memorial.org, where you can also take virtual tours and buy tickets to the adjacent museum. The memorial is open from 10 a.m.-5 p.m. daily, while the museum is open the same hours from Thursday through Monday.