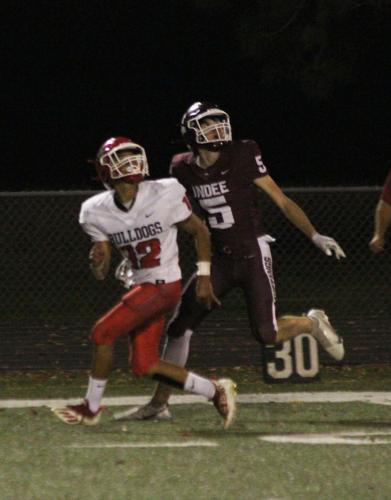 Senior Sawyer Wendling (5) prepares for a deep pass (which he caught) against Hampton-Dumont-CAL. 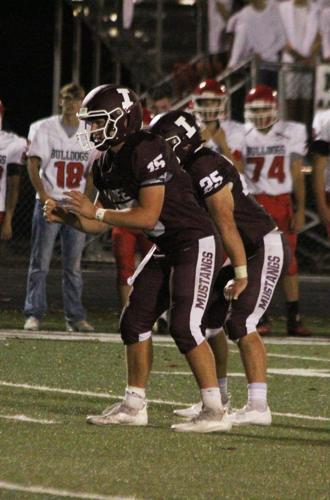 Junior Mitchell Johnson (15) threw for 149 yards and 2 touchdowns in the Mustangs’ 40-13 win over Hampton-Dumont-CAL. 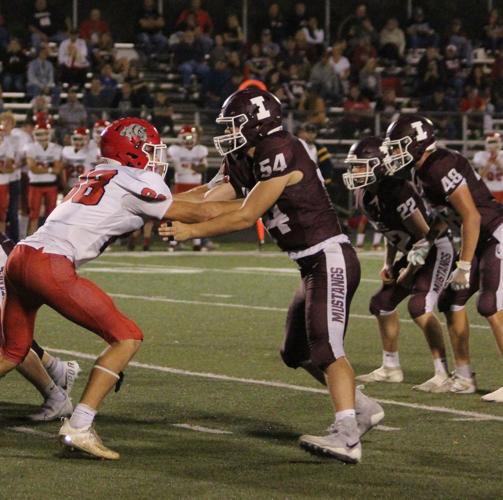 Junior Kolby Sebetka (54) and the Mustang defense were stellar in a 40-13 win over Hampton-Dumont-CAL.

Senior Sawyer Wendling (5) prepares for a deep pass (which he caught) against Hampton-Dumont-CAL.

Junior Mitchell Johnson (15) threw for 149 yards and 2 touchdowns in the Mustangs’ 40-13 win over Hampton-Dumont-CAL.

Junior Kolby Sebetka (54) and the Mustang defense were stellar in a 40-13 win over Hampton-Dumont-CAL.

INDEPENDENCE – It took a while for the Mustangs to get rolling, leading 14-0 at the half, but once they stepped out of the locker room at halftime, it was all Independence. The Mustangs rolled in the second half, winning over Hampton-Dumont-CAL, 40-13.

Senior Marcus Beatty had only 55 yards rushing in the first half, but exploded for 198 in the second behind that big offensive line that dominated the line of scrimmage the final 30 minutes.

Penalties on the Mustangs were the story in the first half, collecting 6 flags and putting them behind the chains for most of the first half.

Independence finally got on the board, set up when senior Keegan Schmitt returned a Bulldog punt 43 yards to the Hampton-Dumont-CAL 37-yard line. Ten plays later, junior Mitchell Johnson hit sophomore tight end Brady McDonald on a 5-yard touchdown pass with 5:15 to play in the half. Point after was good, and the Mustangs lead 7-0.

The Mustang defense would force another Bulldog punt, and Independence took over at their own 46 with 3:25 left in the half. Three false starts and a Bulldog sack looked to derail a Mustang drive, but Johnson dropped back for a pass on 4th and 17 and hit not-so-open McDonald, who made a great catch for a first down at the Bulldog 22-yard line. Beatty punched it in from 3 yards out and senior Dalton Hoover ended the first half with an interception of a Bulldog pass at the Mustang 41-yard line.

Hampton-Dumont-CAL took the second half kickoff and, after a 3 and out, they would punt it back to the Mustangs’ Marcus Beatty, waiting at his own 32-yard line. Beatty scampered 68 yards for a would-be touchdown, only to get called back on a holding call. The Mustangs took over at the Bulldog 34-yard line. Five plays later, Beatty got into the endzone, and the Mustangs led 21-0 with 9:11 to play in the third.

On Hampton-Dumont-CAL’s ensuing drive, they finally hit pay dirt when Bulldog quarterback Cal Heeren dashed for 62 yards and a touchdown with 8:09 to play in the third quarter. The score was 21-7 Mustangs.

The unrattled Mustangs struck back quickly when Johnson hit Schmitt on a 39-yard touchdown pass on the fourth play from scrimmage. Following the Sawyer Wendling point after, the Mustangs led 28-7.

Beatty would get back in the endzone with just 2 seconds to go in the third when he scored from 8 yards out. Two-point conversion was no good, and the Mustangs had a 34-7 lead going into the fourth quarter.

Hampton-Dumont-CAL went on a lengthy drive that took up 9 minutes and 18 seconds of the fourth quarter and scored on an 11-yard pass to make it 34-13 with just 2:42 to play in the game.

The Bulldogs’ onside kick was unsuccessful when the hands team, led by junior Korver Hupke, recovered the ball at the 50-yard line. On the very first play, Beatty patiently followed the blocking of his offensive line, until he saw a hole and busted threw for a 50-yard touchdown run with 2:27 to play. The Mustangs won this one, 40-13.

*NOTE Senior Marcus Beatty is leading the state in rushing with 1515 yards. (Class 5A to Class A).

Your sixth-ranked Mustangs move to 6-0 on the season and will be back on the road this Friday when they travel to Charles City (3-3) for a Class 3A, District 3 matchup.

Looking for acreage to purchase in Denver, Tripoli, or Readlyn

YARD SALE Rocks, minerals and fossils from all over the