You are the owner of this article.
Edit Article Add New Article
You have permission to edit this article.
Edit
Welcome, Guest
Home
News
Sports
Obits
Opinion
Lifestyle
Multimedia
Classifieds
Marketplace
Share This
1 of 3 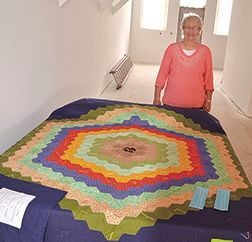 Shirley Wiley, a member of Connie’s Quilters, with the quilt raffled on August 7. 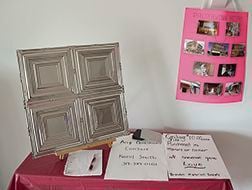 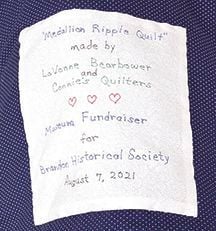 The quilt label on the back of the Brandon Historical Society quilt.

Shirley Wiley, a member of Connie’s Quilters, with the quilt raffled on August 7.

The quilt label on the back of the Brandon Historical Society quilt.

BRANDON – On Saturday, August 7, a unique quilt was auctioned to the highest bidder for $500 during Brandon Days in support of the town’s historical museum. The quilt has an interesting story.

Following the death of LaVonne (Mrs. Dutch) Bearbower, an unfinished quilt she had worked on was donated to Connie’s Quilters by the Bearbower family to be finished and used at the quilter’s discretion. The quilt was finished and donated for use as a fundraiser for the Brandon Historical Museum. Arrangements were made with the Brandon Area Community Club to auction the quilt on August 7, with proceeds going to the Brandon Historical Society Museum Fund.

The quilt is a colorful, five-foot fabric medallion made of 331 fabric hexagons. The medallion is centered on navy blue fabric, tied with like-color ties, creating a ripple effect, thus called “the medallion ripple quilt.” The finished quilt measures 108 x 87 inches.