Skip to main content
You are the owner of this article.
Edit Article Add New Article
You have permission to edit this article.
Edit
Welcome, Guest
Home
News
Sports
Obits
Lifestyle
Opinion
Multimedia
Classifieds
Marketplace
Contests
Share This
1 of 5 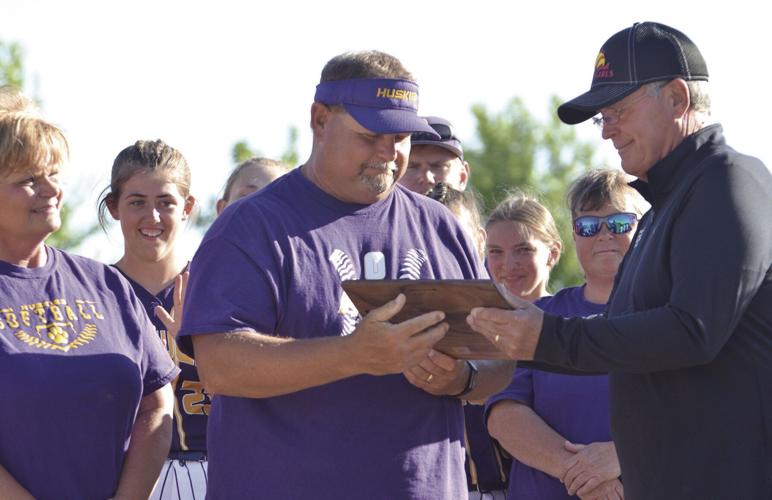 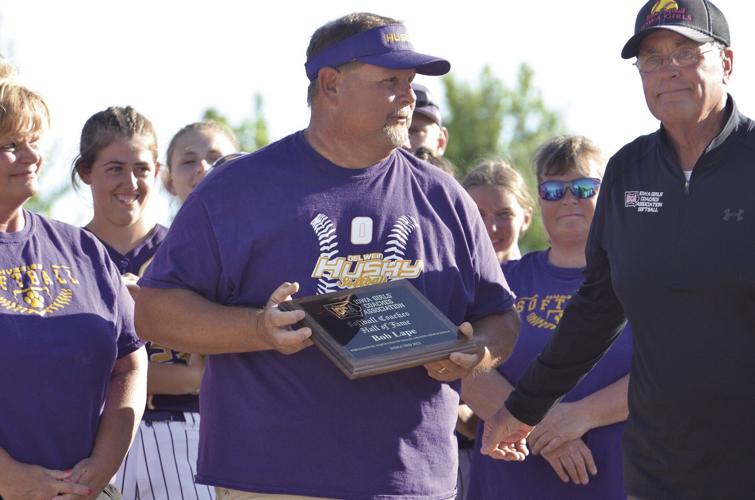 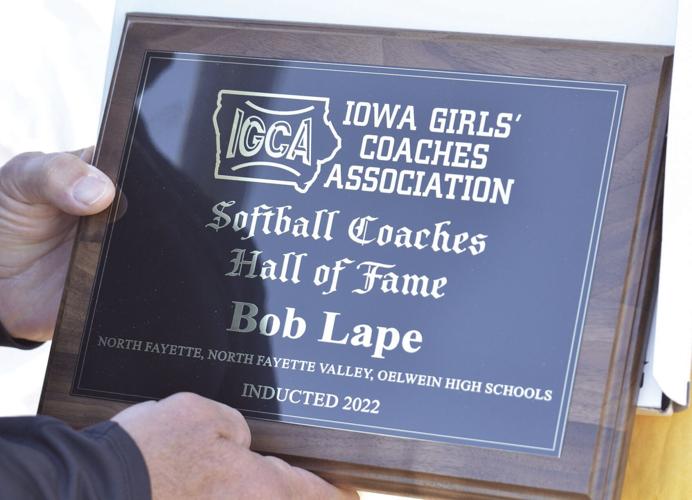 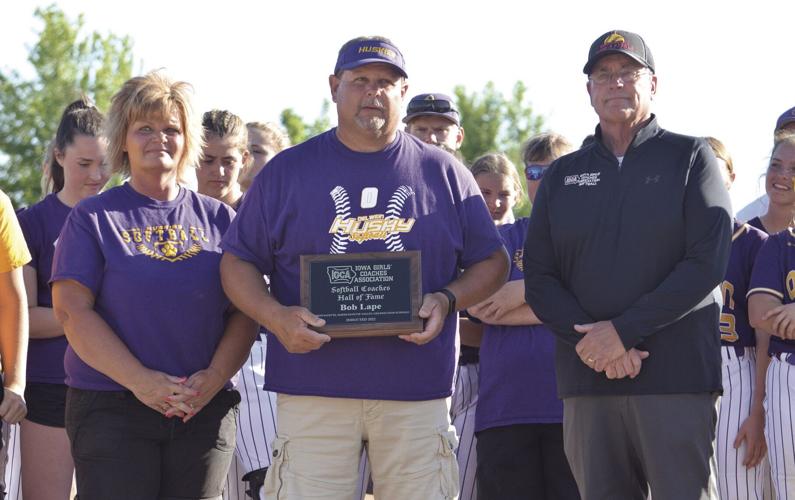 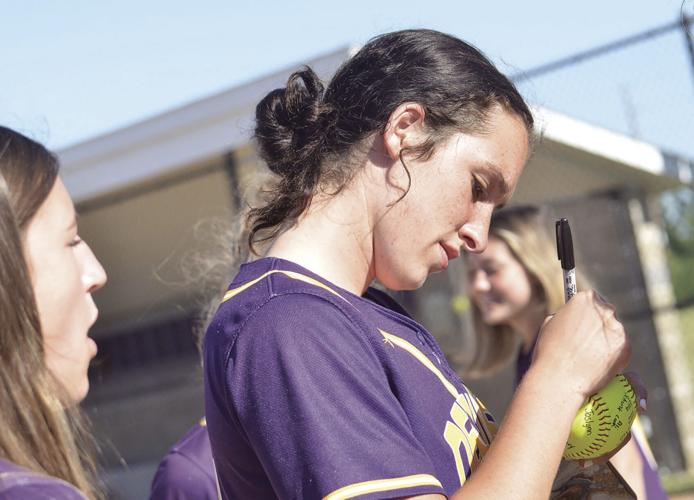 The clapping got to Bob Lape.

Flanked by family, former staff and his current softball team, Oelwein’s head coach broke into a grin at home plate as the public-address announcer wrapped up the five-minute presentation for the longtime head coach. Thus Lape was inducted into the Iowa Girls Coaches Association Softball Hall of Fame on Wednesday prior to a game against West Central.

As the ceremony ended and everyone began to clap, Lape let out a brief, “Thank you, this means a lot,” and waved.

“It just means a lot, because I know my dad has instilled (in himself) being proud of who he is and how he coaches,” Wartburg soon-to-be sophomore Kennedy Lape said. “He’s worked so hard over the past 30 years and now he’s received one of the highest achievements that he can get as a coach in Iowa. I’m just proud of him.”

Bob Lape enters the Hall of Fame near the completion of season No. 28 sporting a 670-353 record after 25 seasons at North Fayette/North Fayette Valley and three in Oelwein. He is the Upper Iowa Conference’s all-time leader in wins after 647 victories between NF and NFV, winning 20-plus games in 22 of 25 seasons. He collected 11 Upper Iowa Conference championships, reached the Class 2A tournament in 2004 and coached 15 IGCA softball All-State selections, with two three-time picks in Stacey Monroe (NF) and Megan Gavin (NFV). Reagan Wolverton is the only player to be named All-State for both North Fayette and North Fayette Valley.

“I think the reason for his success has been, he stresses the fundamentals every day and hard work every day, playing consistent,” said Brent Kuker, a former assistant at NF/NFV. “It’s been a factor from the time I knew him when I watched his teams play. They were always very fundamentally sound.”

Lape intertwined coaching football and softball at all three schools, as well as time as a track coach at NF/NFV. He was named Northeast District softball Coach of the Year in 2012.

“He stresses the fundamentals all the time,” said former assistant Justin Heins. “I think it shows with the number of years he’s won 20 games or more every year. In the two years before he took over, (North Fayette) was 0-50.

“They won seven games the first year and the girls were just happy to play a complete game, much less win a few. After that, they were rolling along. It’s a testament to him and the way he coaches.”

“I have pictures of me at games ever since I was little, playing with the girls before games and just watching them in the dugout,” she said.

All three Lape children — Dalton, Ethan and Kennedy — were ever-present during Bob’s tenure as they grew up and played for him. Dalton now assistant-coaches on both the football and softball staffs.

“My sister played for him on the state team, and Dalton and Ethan used to ride the bus back then when they were little,” Heins recalled. “We had a rule that they had to be (potty-trained) or they couldn’t ride the bus. That’s how little they were when they were traveling around with the kids.”

“The first thought I would like to say thank you to my dad for being the best role model a person could ask for,” Dalton and Ethan wrote in a joint email. “He has had a lot of success not only in coaching but teaching as well. I’ve had the privilege of being by his side growing up and seeing the impact he has made on many young lives. He is the reason I have gotten into coaching and teaching.

“It isn’t easy being a coach with being away from family, but my dad has made it a family atmosphere with all of his teams. My mom has supported him over the years and let my dad live out his dream, which is a big part of his success.”

“I still remember being in middle school myself and watching him play catch with Stephanie Eberhart in the middle school gym (in the late ‘90s),” Heins said. “I’m sure it was the middle of winter, and he’s just putting the time in. Doing all the little things like that to make your program a quality program.”

Bob made it known in the week leading up to Wednesday the credit should go to the legion of players he’s coached. He also credited all his assistant coaches — Chris DeBack, Alicia Denner, Heins, Connie Jorgenson, Laura Kreiner, Brooke Kamaus, Marilyn Kamaus, Kuker, Dalton and LeVirgil Monroe.

“I have talked to many people who have told me stories about my dad and the things that he has done for them in their lives,” Dalton and Ethan wrote. “If you would ask him about any of his success, the first thing he would bring up are the kids. It’s all about the kids for him.

“None of this would be possible without the kids and the buy in they must have to be great … and the parents that let all their kids participate and trust my dad in his coaching ability.”

PHOTOS: Bob Lape gets inducted into the softball HOF

Some clouds early with showers likely late, and a thunderstorm is possible. Storms may contain strong gusty winds. Low 67F. Winds SSE at 15 to 25 mph. Chance of rain 100%.

Some clouds early with showers likely late, and a thunderstorm is possible. Storms may contain strong gusty winds. Low 67F. Winds SSE at 15 to 25 mph. Chance of rain 100%.

Thunderstorms likely in the morning. Then a chance of scattered thunderstorms in the afternoon. High 81F. S winds shifting to WNW at 15 to 25 mph. Chance of rain 80%.