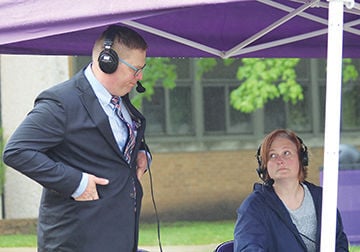 Superintendent Josh Ehn wraps up his interview with radio host Liz Brown ahead of the Oelwein High School Class of 2020 Commencement. 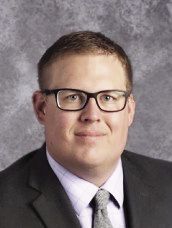 Oelwein Schools Superintendent Josh Ehn motions to show how the light from the exterior windows at the renovated Wings Park Elementary will filter into interior classrooms through a second set of windows. He is standing in a breakout room looking into the cafeteria space.

The Keystone AEA Board of Directors announced the finalists on Friday.

The Keystone Board will interview the finalists on Monday, as will teams of local superintendents and Keystone AEA staff members. Grundmeyer Leader Services consultants is guiding the process.

A total of 21 candidates applied for the position through Grundmeyer Leader Services.

Ehn has been the superintendent in Oelwein since 2017, and he also serves as the district’s special education and curriculum director. He was the Oelwein High School principal from 2015-2017.

Ehn has led multiple construction projects during his tenure as a superintendent, says a news release from the AEA, which adds that he has also improved the district’s finances, led a revisioning process, and developed a PK-12 online school.

Ehn has also been active in the community, including holding leadership positions with the Oelwein Rotary Club and Oelwein Chamber and Development. He received the OCAD Volunteer of the Year award in 2019.

Hill has been the the superintendent at North Tama for the past seven years while also serving as the district’s special education director, human resource director, equity coordinator and Section 504 coordinator.

The news release says as superintendent he has improved the district’s financial condition, added programs to support the mental health of students and staff, and led implementation of the teacher leadership and compensation program. He also implemented an eSports program and expanded the voluntary preschool program.

Previously, Hill was a shared superintendent with Gladbrook-Reinbeck Schools from 2016-2020, and as elementary principal for Union Community School District from 2005-2016.

Rheingans, a U.S. Army veteran, has been the Dubuque superintendent for nine years. He the district’s director of human resources from 2004-2012. His previous experiences include serving as the principal at Wilton Junior-Senior High School and dean of students for North Scott Schools.

As superintendent, Rheingans has led the district through strategic planning, implemented mental health support programs for students and staff, and led professional development for the district leadership team, the news release says.