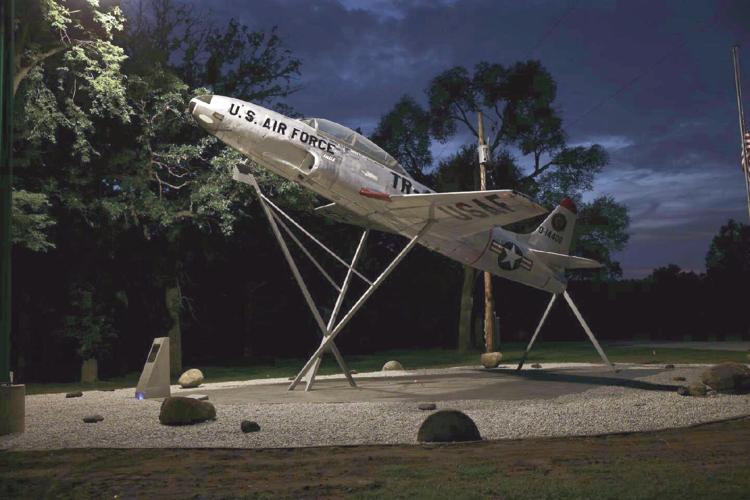 Miller’s Construction Inc. installed the red and blue lights and the stamped concrete with compass and brick patterning in the recently-renamed Saur-King Jet Plaza at Oelwein City Park over the summer. It will be dedicated on Sunday, Sept. 25.

Lights were installed in the recently-renamed Saur-King Jet Plaza at Oelwein City Park over the summer.

Miller’s Construction Inc. installed the red and blue lights and the stamped concrete with compass and brick patterning in the recently-renamed Saur-King Jet Plaza at Oelwein City Park over the summer. It will be dedicated on Sunday, Sept. 25.

Lights were installed in the recently-renamed Saur-King Jet Plaza at Oelwein City Park over the summer.

It is being named for Royce King and then-County Attorney Walter Saur, who were Air Force Reservists in summer 1964 when their effort of a few years succeeded in bringing the US Air Force F-80 “shooting star” jet from Truax Air Force Base near Madison, Wisconsin, to Oelwein.

The Sunday event will coincide with the 98th birthday of Royce’s widow, Frankie King.

It is being planned by “a one man committee” of Jake Blitsch, Oelwein American Legion 1st vice commander.

Invitees of honor will include members of both the Royce King and Walt Saur families, including Frankie King, her and Royce’s children Jim King of Davenport and Sue (King) Bilodeau of Chico, California; Walt’s children, County Attorney Wayne Saur and Wayne’s two sisters, Cindy (Saur) and her husband Thom Grote of Iowa City, a retired career Navy man; and Dixie Saur of Solon. The Oelwein American Legion Honor Guard Ross Reid Post 9 and Auxiliary and members of the VFW Post 1725 will attend, among possibly other local groups.

As 1st vice commander, Blitsch has submitted yearly reports and photos of the condition of the jet — or “static display” as it is known to the Air Force — as evidence of continuing maintenance.

“This year I decided I needed to do something serious about it,” Blitsch said.

In a March news article, Blitsch requested donations for restoration of the jet.

“I was inundated with funding,” Blitsch said, thanking the community for their generosity.

A bronze plaque from Florida-based International Bronze Plaque Co. will commemorate the two Air Force retirees responsible for getting the jet here, as will two memorial benches from Plastic Recycling of Iowa Falls.

Miller’s Construction Inc. of Hazleton has installed a new concrete pad beneath the jet, which is stamped with a central compass and a brick pattern across the pad. Red and blue lights Miller installed in the concrete pad now illuminate the ventral side of the jet and focus inward from the north, east, south and west corners of the pad.

White street lights donated from a scrapyard with permission of the city of Oelwein, light the metal “bird” from above.

The Oelwein Legionnaires officially started the project in July 1963, per the Sept. 12, 1964, Oelwein Register report; Walt Saur later recalled planning began in ‘61 or ‘62 (1997 Oelwein Register). Although the airplane was obtained free of charge, the Legion helped pay for its transportation and housing the airmen who installed it.

Its voyage here began in summer 1964. Oelwein Police Chief R. H Stoddard and policeman LaVern Vargason took part in a convoy from Madison, Wisconsin, to bring the plane to Oelwein on a semi trailer. With the nose and tail removed to narrow the load, the cargo was 13 feet, 6 inches wide with the wings — which span 38 feet 10 1/2 inches, per a 1997 report — lying forward and back on the flatbed.

“As Iowa forbid state highway travel with such a wide load, unofficially the lieutenant of the local Highway Patrol took a ‘day off’ leading the way mile after mile, stopping traffic at intersections until the truck passed on the county roads,” King wrote in a past Oelwein Register Memorial Day piece, “Story behind the plane.”

The plane had been purposely parked so children could see into the 1½-inch thick plex-covered cockpit. After vandals smashed it with a rock, the plane’s cockpit was replaced, and the structure’s stilts were designed by an Oelwein dentist, L.P. Jones, along with Kevin Steggall, husband of retired Oelwein Middle School Principal, Mary Beth Steggall.

King and Saur were pictured repainting the jet’s lettering, insignias and serial number on the tail in the 1997 Oelwein Register report.

Saur was a past commander of the American Legion Post 9, and King was a decades-long member of the Legion Honor Guard.

Saur spent time flying other planes of the F-80 model, as it came to be known, he said in the 1997 report. King flew C-47 transport planes.

It is not the first item of military memorabilia in City Park. The park previously housed a World War I cannon where the F-80 jet now stands, but during the World War II effort, it was melted down for scrap metal.

Some clouds in the morning will give way to mainly sunny skies for the afternoon. High 61F. Winds NNW at 10 to 20 mph.