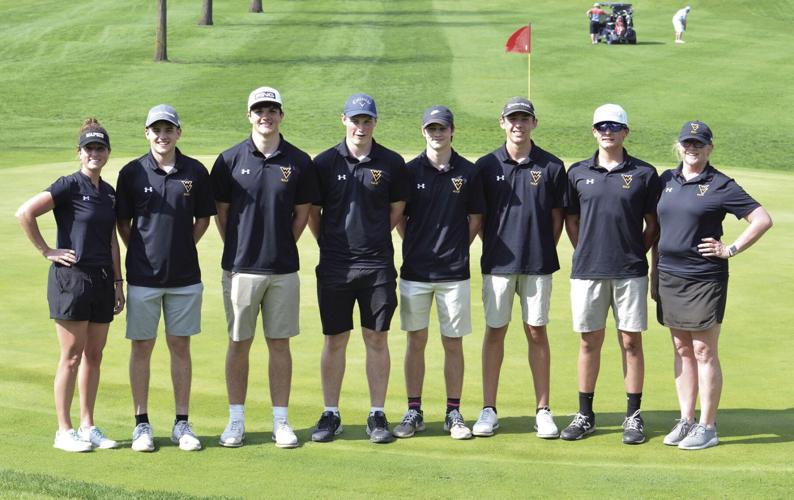 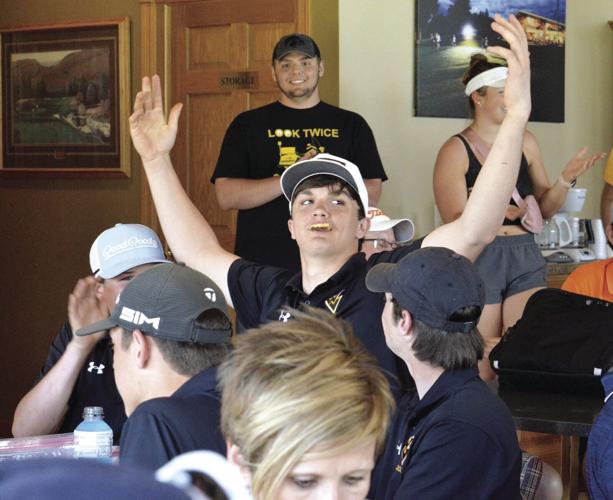 Members of the Wapsie Valley Warriors golf team celebrate after hearing they won the sectional meet. 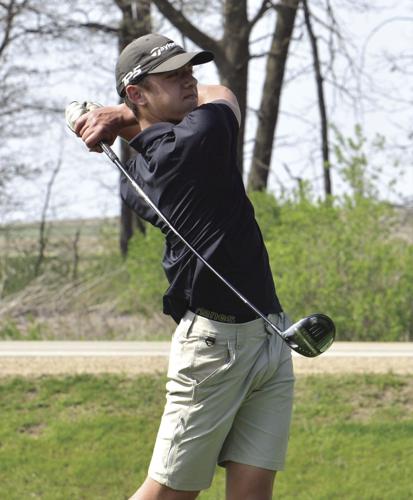 Members of the Wapsie Valley Warriors golf team celebrate after hearing they won the sectional meet.

“Are you sure? You have to be sure,” the co-head coach said.

She paused, then looked out at the New Hampton Golf & Country Club on Wednesday.

“That’s great for them,” she added.

Roughly two minutes before the official announcement, Wapsie Valley’s co-head coach exhaled. No. 5 golfer Tucker Ladeburg came in with an 85 on his card, which put the Warriors three strokes ahead of host New Hampton to win the Class 2A New Hampton Sectional.

Ladeburg’s 85 was his best 18-hole round of the season. The No. 5 golfer’s score was substituted in for No. 2 golfer Michael Mann II’s, who shot a 95.

“The course was pretty easy. Everything was just straight,” Ladeburg said of the nine-hole course, which the teams played twice. “There were trees, but you just had to hit the ball straight, keep it in the fairway and it was pretty easy golf.”

Wapsie’s top-4 scores were between 81 and 89, two more than its last 18-hole round at the North Iowa Cedar league mega meet.

Brody Blaylock came in at an 81, with Ladeburg four back. Gavin Leistikow shot an 86 and Parker Landsgard dropped an 89.

Keegon Brown shot a 90 and Michael Mann II carded a 95.

“I think we’d both say that we both knew from last season to this season what these boys were capable of doing if they could just figure it out for themselves,” co-head coach Hailey Tiedt said. “Today, they did.”

The Warriors collected 31 pars and three birdies. Blaylock birdied No. 1 as no. 10, and Leistikow dropped a birdie on No. 9 hole the second time. He also birdied No. 3 the first time around.

“I knew I could birdie the hole,” he said of No. 9. “It was straightforward. Just had to follow through with it, keep your head in the right place.”

Most of the sextet dropped strokes the second time around, with Leistikow cutting eight, Landsgard dropping three, Brown cutting two and Blaylock slicing one.

“I know our top four all shot better on the back, the second time through,” Landsgard said. “Obviously, we took something away — maybe hit a different club or had a better shot selection.”

Blaylock nearly made it a double on the day. He tied with Jesup’s Jack Miller for medalist honors and the pair went out to a playoff.

It couldn’t be solved in one hole, as Blaylock two-putted to offset Miller going out of bounds. After their tee shots on the second hole, Blaylock asked Miller how he played the hole during the round. Miller parred it twice; Blaylock double bogeyed and bogeyed it.

Miller put his approach shot into the bunker near the green, while Blaylock’s second shot was taken left of the fairway and short of a creek that was in front of the green.

By the time Blaylock got on the green, he was a stroke behind Miller. Miller’s two-putt was good to close it.

“Just wondering what he got because I played that hole terribly in my round,” Blaylock later said. “I mean, the playoff went pretty bad (for me).”

Heading to district with his team wasn’t a bad consolation.

“I don’t think anything was too surprising. We came and played it (Tuesday), so we knew the course layout, where to go,” Blaylock said. “Played relatively easy today, took what we learned from yesterday and stayed short on everything.”

Wapsie placed fifth at the 1A Nashua-Plainfield Sectional in 2021 and sixth at the 2019 1A Clayton Ridge Sectional, when Mann II, Landsgard and Leistikow were freshmen.

New Hampton and Columbus Catholic also advanced, with the Sailors advancing on a fifth-golfer tiebreaker. The Mediapolis District meet is Monday at 10 a.m.

“The work starts again next practice,” Landsgard said. “It’s going to be hot all through to next Monday. So we’ll have to play through the heat, stay on course.”

Partly cloudy skies this morning will become overcast during the afternoon. High 63F. Winds ENE at 10 to 15 mph.