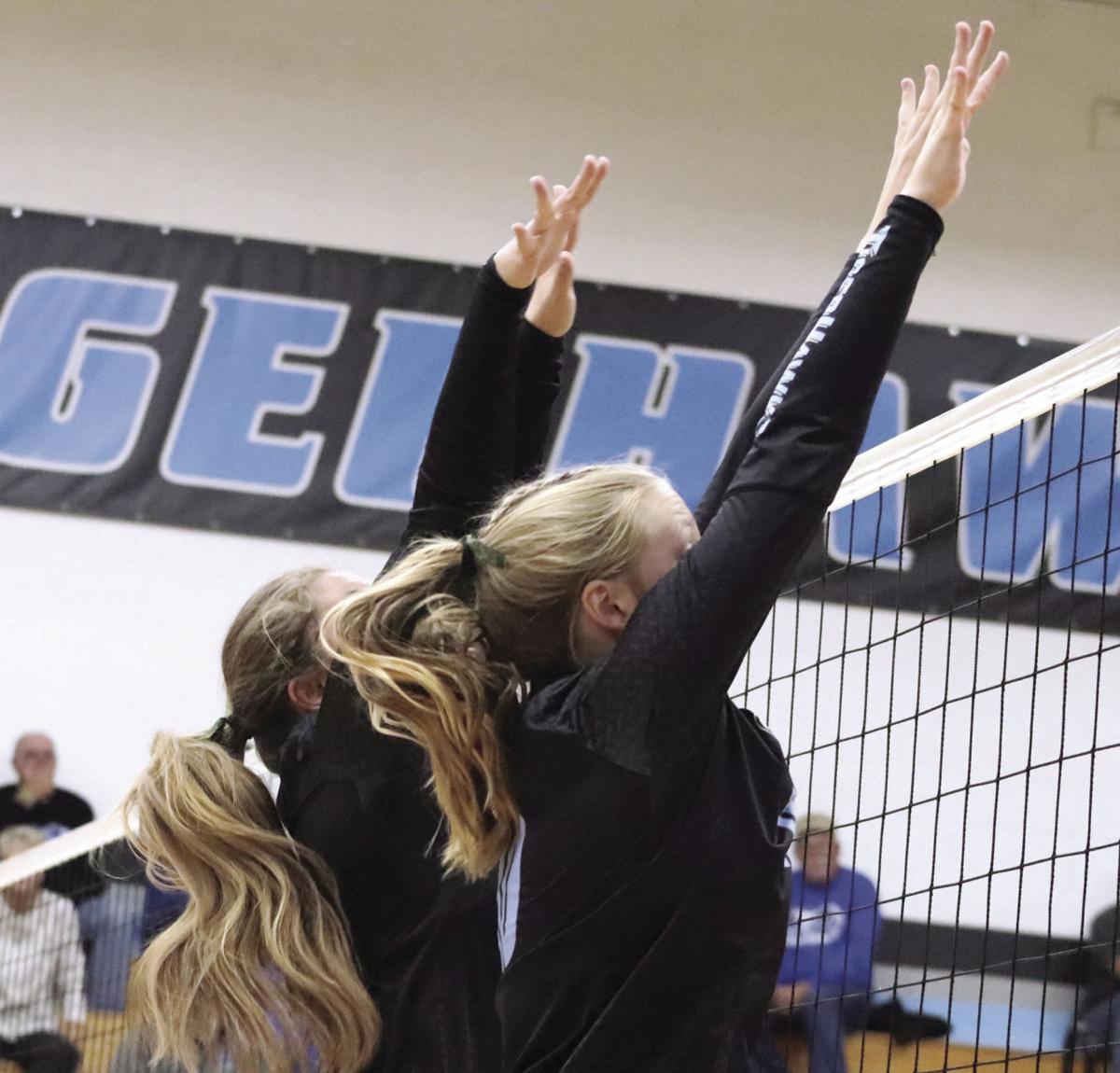 North Fayette Valley’s Jordan Johnson and Abby Schmitt go up for a block attempt during an Upper Iowa Conference match against West Central on Tuesday in West Union. 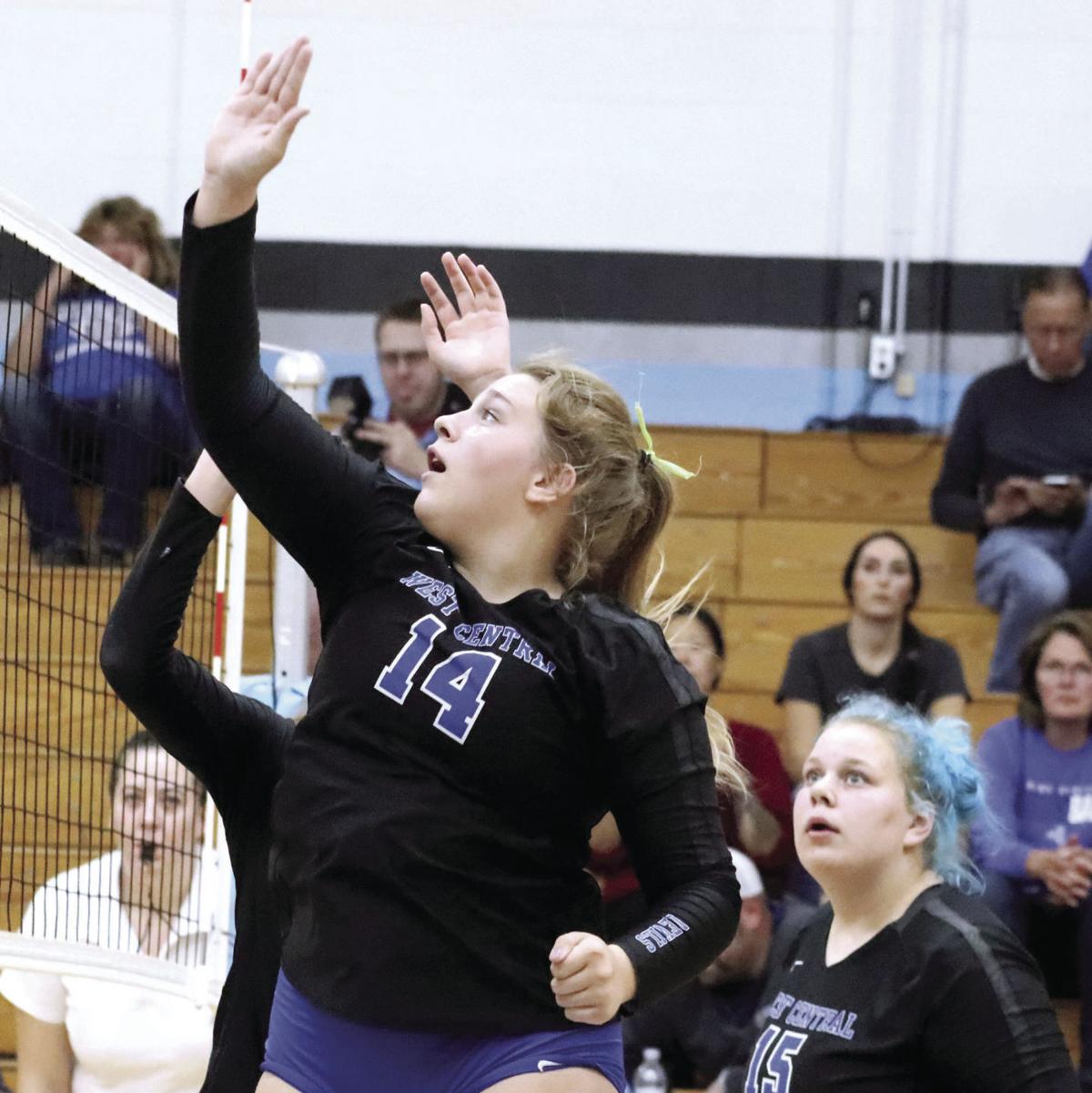 North Fayette Valley celebrates its first Upper Iowa Conference championship since 2008 after a five-set win against West Central on Tuesday in West Union.

North Fayette Valley’s Jordan Johnson and Abby Schmitt go up for a block attempt during an Upper Iowa Conference match against West Central on Tuesday in West Union.

A chance to be perfect in league play.

The former titlists, however, didn’t go down without a fight.

NFV ended league play with an 8-0 record, as West Central did last season.

The word “great” spilled out in unison from a quintet of weary seniors when queried how it felt to snare the crown. NFV (16-13, 8-0) was sixth when this group were freshmen, rose to fifth in 2019 and tied for second with Clayton Ridge last season.

“Since the beginning of the season, we kinda had in mind we wanted (to be) conference champs,” libero Chloe Yauslin said. “When it came (to tonight), we kinda were just like, ‘Oh, there’s pressure.’”

Abbi Block’s shorthanded crew held on at the very end, dropping an Abby Squires kill and ace and a Kaydence Martin kill in the last four total points to claim the first set.

“Honestly, I wasn’t expecting it coming in,” Block said. “Without having a setter, with how we played (Monday, a 3-0 loss at South Winneshiek), it’s been tough. But taking that first set was huge. It was huge for even the girls’ attitudes. It was big and gave them confidence.”

The TigerHawks took the second set to knot the match, but West Central used a late third-set run to break a 16-all deadlock for a 19-16 lead off kills from Squires and Emma Michels and a Martin ace.

It held again, with the Blue Devils using a Michels kill to end a three-point spurt for a 2-1 lead.

In the fourth, it was the home team’s turn to utilize a set-changing run.

Trailing 12-7, NFV pulled within 12-10 on a WC error, Halverson’s ace and a Jordan Johnson kill. After an Aaliyah Gordon kill gave the Blue Devils a three-point lead, the TigerHawks ran off five for a 15-13 lead.

At 17-15, NFV ran off eight points in a row, with four kills from Halverson and two aces to end the set and knot the match at 2-2.

“We had our heads held high, which isn’t always a bad thing,” Halverson said. “I think our main problem was thinking we could come in and sweep them.

The offensive streak rolled into the fifth set for NFV — that, and an adage.

A Zaida Moore dump kill put the TigerHawks ahead 3-1 and Halverson later placed consecutive kills for a 7-2 advantage. West Central closed within 9-6 and 10-7, but Justine Cowley contributed a kill and ace on back-to-back plays for the host and Jennifer Lee’s squad ended the set, and match, on a five-point run.

“I think I said, ‘If we want to stay undefeated in our conference, we have to show up. We can’t expect to just be on the court and win,’” Lee told her team before the match and fifth set. “West Central showed up to play, were super-scrappy. We had to expect that ball to come over.”

Added Yauslin, “In that fifth set, our hitters kind of went off. We knew all that we had worked for and we were not letting go.”

Part of NFV’s problem was unforced errors. It gave up just seven aces, but made myriad serve-receive or passing errors, eight service errors and 32 attack errors. Several times Halverson said, “Come on” or “What’s going on?” to herself, and Lee constantly asked her team to communicate better during timeouts. The coach later noted the miscues started with poor passing, which led to poor sets or attack attempts.

“It’s hard to come out of that, because we’re like, ‘What can we do?’” Moore said. “I think the biggest thing is just talking to yourself and hitting shots. Not necessarily smoking the ball, but just hitting some tips or just getting the ball over.”

West Central put down 23 kills, with Squires (six), Gordon (five) and Martin (five) combining for 16 of them. Squires (11) and Martin (seven) put up 18 of 22 assists and Martin added four of the team’s seven aces.

“That was a good volleyball there,” Block said. “It’s been tough yesterday and today.

“We’re out a setter. So, my middles, out of everyone on the court, my middles stepped up to set. They stepped up.”

Moore combined 33 assists with five digs, four kills and an ace. Halverson collected 18 of the team’s 46 kills, while Cowley put down nine, Alyssa Bohr chipped in eight and Johnson had seven.

“Near the end of the match, we knew we worked way too hard to just lose,” Halverson said.

Added Yauslin, “We knew we could do it.”