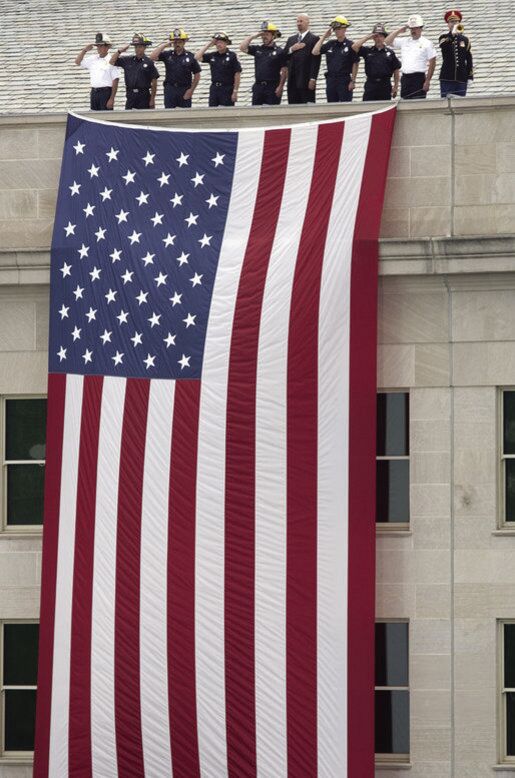 A Marine Band trumpeter plays Taps while first responders and officials salute a flag that hangs on the side of the Pentagon Thursday, Sept. 11, 2008, during the dedication of the 9/11 Pentagon Memorial at the Pentagon in Arlington, Va. 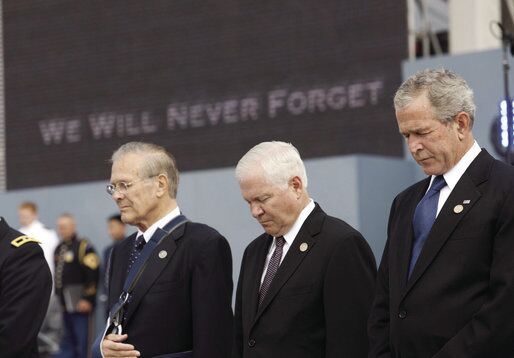 President George W. Bush is joined by former Secretary of Defense Donald Rumsfeld, left, and U.S. Secretary of Defense Robert Gates, as they bow their heads during a moment of silence Thursday, Sept. 11, 2008, during the dedication of the 9/11 Pentagon Memorial at the Pentagon in Arlington, Va.

"Thank you all. Mr. Vice President; Secretary Gates; Madam Speaker; Justices of the Supreme Court; members of my Cabinet and administration; members of Congress; Admiral Mullen and the Joint Chiefs; Secretary Donald Rumsfeld, a first responder on September the 11th, 2001; directors of the Pentagon Memorial Fund -- Mr. Chairman, congratulations; families and friends of the fallen; distinguished guests; fellow citizens: Laura and I are honored to be with you.

Seven years ago at this hour, a doomed airliner plunged from the sky, split the rock and steel of this building, and changed our world forever. The years that followed have seen justice delivered to evil men and battles fought in distant lands. But each day on this year -- each year on this day, our thoughts return to this place. Here, we remember those who died. And here, on this solemn anniversary, we dedicate a memorial that will enshrine their memory for all time.

Building this memorial took vision and determination -- and Americans from every corner of our country answered the call. Two young architects in New York City came up with the design. A foundry near St. Louis cast the steel. An Iraqi immigrant in Illinois gave the metal its luster. And citizens from across our nation made contributions large and small to build this graceful monument.

The Pentagon Memorial will stand as an everlasting tribute to 184 innocent souls who perished on these grounds. The benches here bear each of their names. And beneath each bench is a shimmering pool filled with the water of life -- a testament to those who were taken from us, and to their memories that will live on in our hearts.

For all our citizens, this memorial will be a reminder of the resilience of the American spirit. As we walk among the benches, we will remember there could have been many more lives lost. On a day when buildings fell, heroes rose: Pentagon employees ran into smoke-filled corridors to guide their friends to safety. Firefighters rushed up the stairs of the World Trade Center as the towers neared collapse. Passengers aboard Flight 93 charged the cockpit and laid down their lives to spare countless others. One of the worst days in America’s history saw some of the bravest acts in Americans’ history. We’ll always honor the heroes of 9/11. And here at this hallowed place, we pledge that we will never forget their sacrifice.

President George W. Bush is joined from left by former Secretary of Defense Donald Rumsfeld, U.S. Secretary of Defense Robert Gates, Chairman of the Joint Chiefs of Staff, Admiral Michael Mullen and James J. Laychak, chairman of the Pentagon Memorial Fund, Inc. as they bow their heads during a Moment of Silence Thursday, Sept. 11, 2008, at the dedication of the 9/11 Pentagon Memorial at the Pentagon in Arlington, Va. White House photo by Eric DraperWe also honor those who raised their hands and made the noble decision to defend our nation in a time of war. When our enemies attacked the Pentagon, they pierced the rings of this building. But they could not break the resolve of the United States Armed Forces. Since 9/11, our troops have taken the fight to the terrorists abroad so we do not have to face them here at home. Thanks to the brave men and women, and all those who work to keep us safe, there h

We can be optimistic about the future because we’ve seen the character and courage of those who defend liberty. We have been privileged to live amongst those who have volunteered to spread the foundation of peace and justice, which is freedom.

Seven years ago this morning, police officer Cecil Richardson was on duty here at the Pentagon. He saw the terror that day with his own eyes. He says on some nights he can still smell the burning metal and smoke. Not long ago, he wrote me saying, “I remember the reasons we fight. I remember the losses we felt. And I remember the peace we will have.”

That day of peace will come. And until it does, we ask a loving God to watch over our troops in battle. We ask Him to comfort the families who mourn. And we ask Him to bless our great land.

And now it’s my honor to dedicate the Pentagon Memorial."