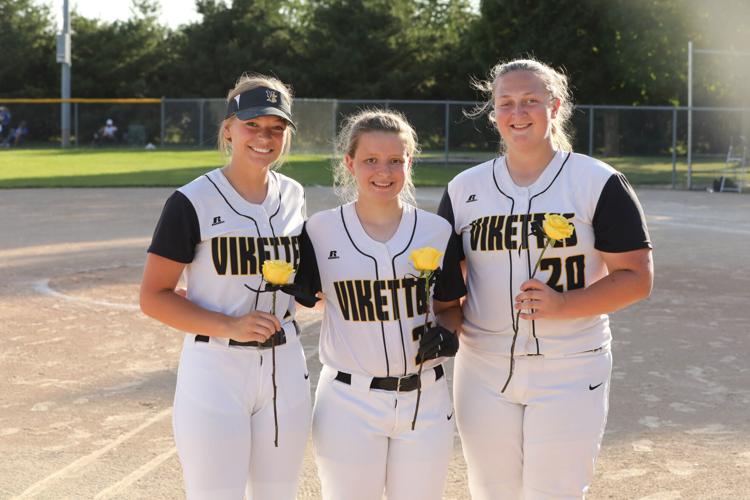 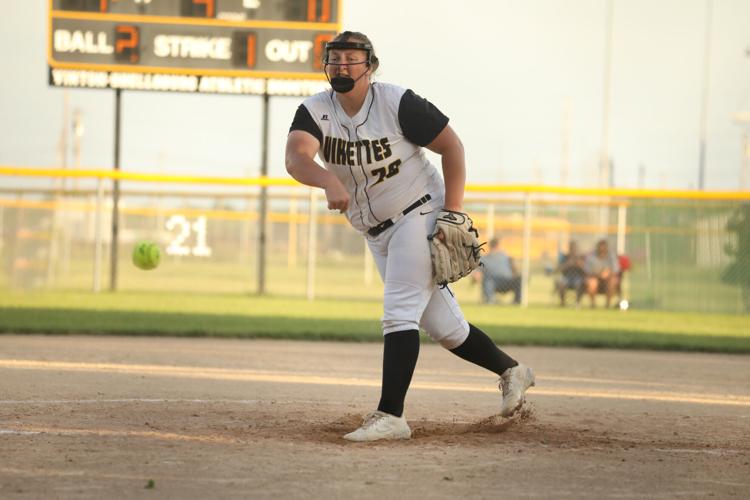 VS senior Anna Becker drew praise for her Senior Night performance against Dike-New Hartford on Tuesday, striking out for batters and limiting a talented Wolverines team.

VS senior Anna Becker drew praise for her Senior Night performance against Dike-New Hartford on Tuesday, striking out for batters and limiting a talented Wolverines team.

VS softball recognized three athletes on Senior Night as they hosted Dike-New Hartford on Tuesday, falling to Wolverines 4-2 in a close battle made possible by the very seniors the Vikettes were honoring.

The non-conference battle saw the two opponents go scoreless for the first two innings, including senior Kortney Etten getting the start at right field and catching an early out for the Vikettes. D-NH settled for a run in the third inning when senior Isabel Mullinex picked off a runner at second for potential another score. All the while, senior Anna Becker “pitched her best game all season long.”

“Anna pitched great against a quality team and I’m really proud to see her do that today,” coach Bari Parrott said. “Coming off her injury, I’m really proud of Isabel sticking it out and hitting some balls hard tonight. Kortney normally doesn’t play varsity with us, but she’s a phenomenal kid you want to build your program with. I’m glad she had that chance for that catch today.”

An error on right field allowed the Wolverines to score three runs in the top of the fifth. Mullinex responded with a double in the bottom of the inning to score freshman Dakota Cornell. The Vikettes got runners on in the seventh inning and junior Sophia Kreutner up to bat. D-NH elected to put out a new pitcher and got the out from third to first to stop a VS comeback.

“Two-out hits have been our nemesis all season long,” Parrott said. “Our margin for error is thin and we have to continue to clean up our defense to not allow unearned runs. We battled hard. Isabel and Ashlie Meyer both hit the ball hard.”

Becker struck out four batters and gave up one error in her senior night in the circle. The Vikettes had five hits on the evening.

The Vikettes (9-19) were swept at Center Point-Urbana the next day 10-0 and 9-6. They will travel to Union on Friday and to Monticello on Saturday for a doubleheader.