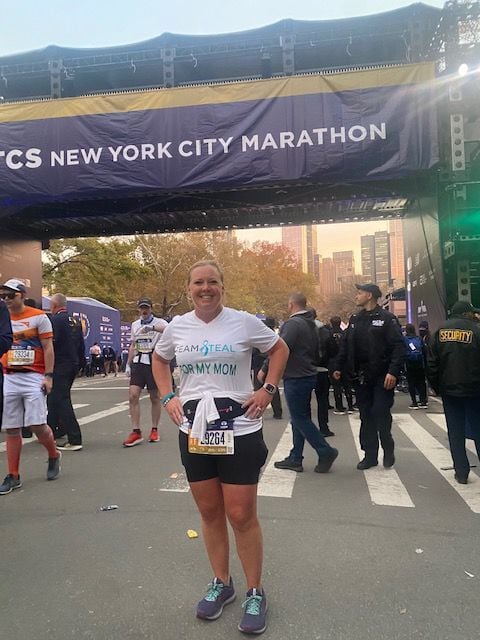 Heather Kalous of Vinton ran in the 50th NYC Marathon on November 7 as a member of Team Teal, raising funds for ovarian cancer research and services.

Heather Kalous displays her medal from the 50th NYC Marathon. Kalous finished the race with Team Teal, raising funds for the Ovarian Cancer Coalition and in honor of her mom, Juanita.

Heather Kalous of Vinton ran in the 50th NYC Marathon on November 7 as a member of Team Teal, raising funds for ovarian cancer research and services.

Heather Kalous displays her medal from the 50th NYC Marathon. Kalous finished the race with Team Teal, raising funds for the Ovarian Cancer Coalition and in honor of her mom, Juanita.

But even that pales in comparison to the 26.2 miles in the New York City Marathon she ran on Nov. 7.

“I ran the Des Moines Marathon two years ago for an organization called Team Teal, which is the Ovarian Cancer Coalition,” Kalous said. “I wanted to put in the miles for a good cause. The national team contacted me and asked if I’d run the NYC Marathon for them. I hadn’t run a full marathon since 2007, but I decided I wanted to run.”

Kalous runs to help raise funds for ovarian cancer research and treatment. Her mother, Juanita Hargrave, was diagnosed with ovarian cancer in February of 2019. Through running with Team Teal, Kalous has met many other runners who have been impacted or have had loves impacted by cancer.

“There are people like me with moms that are fighting, or even survivors running,” Kalous said. “It’s very important to me. I just wanted to finish the marathon for my team and my mom. I didn’t care about my time.”

The NYC Marathon started from Staten Island all the way to Central Park in upper Manhattan. Along the way, Kalous saw an estimated one million spectators as one of 30,000 runners for the 50 anniversary of the famous marathon. COVID-19 had postponed what should have been the anniversary last year.

“We went through all five boroughs of New York City and there was constant music playing,” Kalous said. “I’ve never done anything like this in my life. It was just one big party and supposedly the biggest marathon in the world.”

Kalous finished the race in five hours and 24 minutes, one of 25,000 runners who were able to complete the run. She was grateful to be physically able to accomplish this feat by training well ahead of the race by running around town and to nearby Dysart and Palo.

“It means so much more to complete a race when you’re doing it for a cause,” Kalous said. “My parents have used the money raised for some of the services they need. It was so neat to run with Team Teal and hear their stories as well.”

After an emotional end to her race, Kalous was presented a 50th anniversary commemorative medal and a Team Teal medal recognizing her membership. To learn more about Team Teal, go to ovarian.org/get-involved/team-teal.